Why do people play Games? What is it about human motivators and fun? And why is happiness related to gaming? This is a post about the connections between happiness, fun, motivation & games. Because in the end, we have always craved for games.
Victor Manrique
Blogger
May 18, 2013

What is a game?

We've already stated that people play games because they experience emotions that are closely related to the main factors of happiness (See my personal blog on Playing to Happiness: Part 2 http://www.epicwinblog.net/2013/03/playing-to-happiness-part-2.html)

Mainly because games involve so many fun-creating elements and many ways to fulfill our very basic motivations, but.... What is a game?

Well, defining a game is not one of the easiest things to do, it's not "nice and easy" to say what a game is and there are many definitions given by experts, all different and similar at some point. 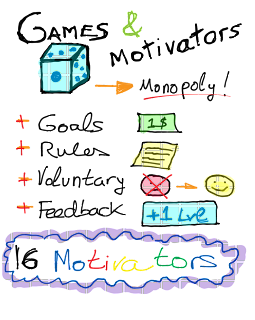 What we can really do is analysing which elements all games have in common to define a game as an activity that involves (and here i quote Jane Mcgonigal, based on Bernard Suits):

- 1. A goal that we will try to achieve. In example, the goal of Monopoly is make your "friends" go busted while you are the richest man in the world (could be true, but its only "your" world)

- 2. A set of rules that we have to respect and follow. In this same example, we can only roll two dices of 6 faces (wish we could play with a D&D 20´s). This rules create the "frame" or also called "magic circle of Huizinga.

- 3. A voluntary and playful willingness to overcome the obstacles, challenges, or just to play. No one wants to play monopoly if your MBA super cool teacher tells you to do so to learn. Well, maybe we do, but it wont be that fun if a mark is given! Games are voluntary, and if forced, playing turns into working (This refers to Daniel H. Pink and his book "Drive")

- 4. Last but not least, games require continuous feedback on what we are doing. In monopoly, feedback is given through our friends giving us money for our streets. We did something rigth and we get the confirmation of it. All the way around, when we pay, we know we didnt do that much right. Negative feedback is also provided! Points system are this kind of feedback that almost all games use.

So we know what a game is, but...why do we actually play them? For happiness? Yes! but.. What are the reasons underlying?

Well, it turns out that humans are not as complicated as they say. We are more than carrots and sticks but we´ve got what Dr. Steven Reiss calls: The 16 basic human motivators and their object of desire (see the picture above. Taken from John Radoff´s "Game on"): 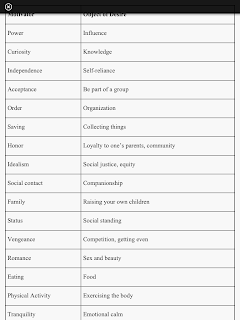 So in example, humans are motivated by order and we desire organization. Simple huh? Ever thought of why games like Candy Crush or Bejewelled are so popular? Something inside your brain is telling you: that's all messed up! Tidy it up now! (Like moms and kids, but in games and without rewards).

Or another example, social contact and status. Two words that appear everywhere nowadays, and that are the base of twitter, facebook, and any kind of social experience. Nothing new though, once upon a time, Aristoteles said that humans were "social animals".

Checking the list, we can also see that humans crave for acceptance, the feeling of being part of something bigger than us, to be part of a group. A place to belong, and where to find a better place to do so than in World of Warcraft or Guild Wars 2? Guilds are based on comradeship and this kind of experiences.

Even Angry Birds, a casual game that appears to be as simple as throwing outrageous birds to nasty piggies has a background "behind the scenes". Those piggies stole the bird´s eggs, and those birds are YOUR birds. Vengeance IS REQUIRED!!! Joining dots?

If at this point, you are starting to realise that everything makes sense, wait until fun enters the main scene, gaming is a riveting and thrilling world because....

This is the second part of the series: "Why People Play" (originally publicated on my blog as part 1 here: http://www.epicwinblog.net/2013/04/why-people-play-games-and-human.html) and it´s dedicated to fun and its connection with our human motivators.

Because in the end, playing games is all about Fun/Happiness. 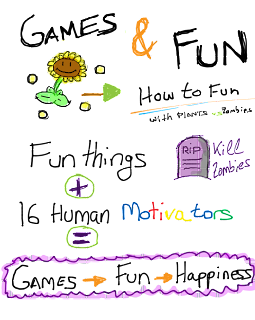 The concept of Fun - The How

The truth is that defining fun is not as simple as it may seem, and that´s mainly because the concept of fun changes depending on the person that thinks of it. What is fun for me, might not be for you.

So how is fun described? Fun is defined as enjoyement, amusement or lighthearted pleasure, but the most important thing about fun is not what it is, but how it happens.

We could be hours discussing about its concept, but the really interesting part of it is what fun means for games and how to create it. To see that, we must check Jon Radoff´s Book out ("Game On") and its list of the 42 things that are fun!

The 42 things that are FUN

So Games are fun, and we already said that fun was related to happiness through the PERMA happiness factors (see the link between fun and happiness here: http://www.epicwinblog.net/2013/02/playing-to-happiness-part-1.html) but how we actually create fun?

This is Mr. Jon Radoff´s list of the 42 fun things (divided into two screenshots): that at some point is a developed model of the MDA model of Robin Hunicke, Marc Leblanc, Robert Zuker ("A Formal Approach to Game Design and Game Research"): 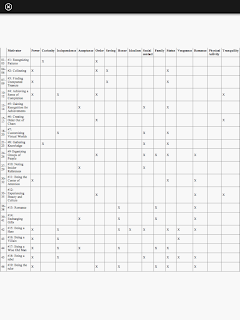 So we can see that, in example, finding random treasures is fun. Ever wonder why there´s always a random drop system in games? Or random gifts in games? You are playing today, pretty boring and..all of a sudden a great item drops! It made you day!!! Cheers to beers!!!

Or Customizing virtual worlds. A clearly fun activity that has made The Sims or Minecraft a total hit! We all know those empty fields need houses!!! Become Norman Foster and make them look EPIC!

And what about Romance? Final Fantasy and its melodramatic scenes were added just because it looked cool to have a love story just there? Rather not! 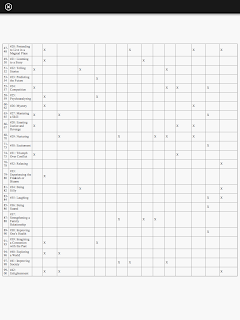 Or mistery! Mistery makes everything funnier in games! Prof.Layton games? Not only a puzzle! Not knowing what would happen now in that game? More hours played to find out, or we cannot sleep properly!

Even nurturing is so much Fun!!! Farmville? Plants vs Zombies? Those plants are starving, they are so cute and they need your help. Give them their daily water dose and let them eat the zombies!!!

When the MAGIC comes!

We have just seen the list of "How to make games FUN" but did you realise about the small detail just in the upper part? Remember what all those things are?

YES!!! They are the 16 human motivators and its connections with the 42 fun things!!!

The most important part of games is that through fun, games are fulfilling our human motivations making us happier!!!!!!

PEOPLE PLAY GAMES BECAUSE THEY ARE A SOURCE OF HAPPINESS!!!!!