Why I Loved "Edith Finch"

"What Remains of Edith Finch" brought some truly innovative storytelling features to the table by tightly linking mini-games about controls to a story about life, death, and what control we have over them.
Raph Koster
Blogger
February 08, 2018

I was chatting on Twitter with someone about narrative games, and What Remains of Edith Finch came up. It was my favorite game of last year, and I had written this little bit on it for a forum discussion elsewhere... but never posted it. So here it is, slightly expanded.

I'll try to do this without spoilers. TLDR: Basically, an amazing gamut of emotional stuff gets evoked by linking mini-games (mostly about control, which is crucial to the underlying themes of the story) to the stories really tightly.

Edith Finch is a major structural evolution of what people have termed "walking simulators," first person narrative storytelling, a hybridization of filmic story with narrative drips from static object interactions.

Gone Home (which I liked a lot) was basically "click on things, get story bit, move on." The game consisted in finding all the story bits in a zone before moving to the next zone, and in assembling the bits in your head to form a coherent picture. In that sense, it was not very structurally sophisticated -- it told an interesting story, but mechanically, it was basically the environmental storytelling mechanic over and over, with some minor key lock stuff in between. I hasten to add that this isn't a negative--as designers, we should select mechanics based on whether they serve our goals, not because they are complex and cool.

Later narrative games ranging from That Dragon, Cancer to The Novelist have added more forms of mechanical interaction with the story. TDC is probably the most obvious direct antecedent to Edith Finch; sequences in TDC involved moving in particular directions, or doing specific actions, that lined up to the story. 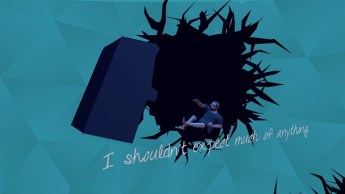 For example, in TDC there is a moment where the story is about not being able to continue struggling, and needing to embrace the fact that terminal illness is going to win. The game has been presenting you with a challenge to swim to a surface, and the "correct answer" in terms of play action is to choose to drown. It's a powerful moment of tightly coupling narrative and basic gameplay mechanics -- what might get called ludonarrative consonance rather than dissonance.

It's also, as I have mentioned was common in the large wave of art games over the last decade, a sort of denying gameness, structurally speaking. Like many other art games, it uses futility -- failing, "not actually playing," surrender -- as the way to make its point. Edith Finch does the opposite.

Edith Finch is basically a linked short story collection. The player moves through gradual narrative discovery learning about the family history of the character they are playing. The action takes place entirely inside and in the immediate grounds of a magical-realist house on the shore somewhere in the Pacific northwest. 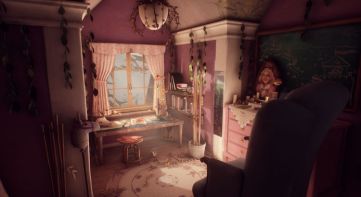 The actual exploration involves some basic puzzle solving, adventure game style, with hidden doors and the like. This is obviously not new in games, but it immediately frames the game as not confining itself solely to environmental storytelling. The game also uses location-based audio cues linked to progress to narrate. So basically, it makes use of all the techniques that you saw in games like Ethan Carter or Everybody's Gone to the Rapture.

And then it hugely ups the ante. As you learn about individual characters who have lived in the house in the past, you start to inhabit their experiences. You take control of their body, in flashbacks, and experience what they went through -- actually, it's better put as you cause what they went through. In many cases, the rendering changes radically and with it the style of gameplay. 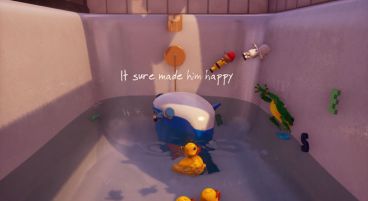 Some of these characters engage in just small minigames that get across what they do -- a kid on a swing, a hermit repeatedly opening a tin. Others offer actual gameplay, such as a brief horror survival sequence narrated in comic book form, or a fun experimental control game where you play a tentacled monster, or a sequence with playing with toys in a bathtub that may make you cry (it's a case where you the player are complicit in something terrible, but the mechanics make you want to do it, and even celebrate you doing it) 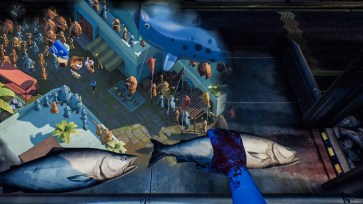 The near culmination of it all is a moment where you literally control a real world activity with one thumbstick and a videogame-in-the-game with the other, and both are rendered at the same time, with one taking over the other, and gradually the repetitive real world play turns out to matter to the trickier-to-drive game-in-game.

This is different from the sort of "subverting gameyness" that earlier works did. Rather than progress (or hit the "point of the game") by hitting a wall in the game's structure, Edith Finch actually sets up progression in a very traditional way, by having you engage in specific types of active complicity. But it manages to do it in service of the same sorts of themes as the earlier games. I find this important, because in some ways, the earlier games, taken as a whole, were starting to feel a bit one-note in a way because they used such similar techniques. Edith Finch to me opens up a whole new array of tools.

Basically, it plays with "mechanics that make you feel things" really effectively. And it's a tour de force in doing so, because sometimes it does it for schlocky horror, others for sadness, others for humor, others for modeling suicidal depression.

Why is this exciting? Games and story historically coexist in troubled fashion. Embedded mini-games typically serve as just "ways to turn the page" -- stuff like a lock picking game in an Uncharted game or something is just a little mini-game and carries basically no emotional impact. Stories may be well written and acted -- and Edith Finch is both, obviously -- but often you are passively observing during the emotionally powerful moments. In Edith Finch, we have the single best example of marrying story and game basically ever -- and not once, but done like twelve times in one game, twelve different ways, with twelve different effects. It's a tremendous achievement in that sense. 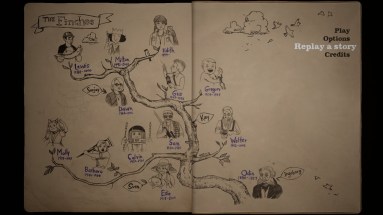 On top of that, yeah, many of the actual mini-games are fun. Heck, the plain old navigation of the space is pretty fun -- it's a cool place to explore, and the hidden passages and the like offer the right amount of that given the emphasis the game puts on story.

All in all, it ends up as a meditation on life and death and whether there is such as thing as a good death or a good life. It does it by talking about control: control over your own life, over what happens in it, and almost every mini-game is basically an exploration of unique controls. That is pretty damn weighty territory for a videogame and hugely more ambitious in terms of story than 99% of games, easily. (Gorogoa, a close runner-up to being my favorite from last year, tackles similar themes via puzzles, but isn't as emotionally direct about it -- the puzzles provide a bit of emotional remove). Even more interesting to me is that it opens up yet more tonal space for art games that maybe aren't about just loss, futility, or impossibility -- all of which are certainly great topics, but we shouldn't mistake "sad" for "deep."

Edith Finch focuses on solving on a very hard design problem and does it brilliantly, and it does it in service of way better writing and storytelling than Zelda does. Zelda, which was also in my top three last year, goes broad with stuff I eat up: simulation, diverse play styles, etc. It offers a far heavier weighting on traditional game play. But as an experience it is therefore far more diffuse, and doesn't reach the same emotional peaks. So it was a greater achievement in pound-for-pound systemic design, particularly given its breadth -- shit, it deserves an award just for its fatigue meter -- but it's a bit like comparing a season-long TV show that has a ton of intricate plot that is great fun to watch but has some episodes that are better than others, and a movie that is smaller, quieter, impeccably crafted at that smaller length, and tears your heart out. (In Zelda, for example, we might call out, well, the entire inventory UI as "worst episode ever," it's really below standard for BOTW's overall bar.)

It comes down to building one really huge systemic machine with tons of nooks and crannies, and building a smaller set of elegant ones to address a particular really hard problem. The upshot is that Edith Finch is more startling than Zelda; not as "fun" overall, but for its brief length, for me, more captivating.

Last year was an exceptionally stellar year for games. I may follow this up with (much briefer) notes on some of the other titles that really stuck out to me.