SEARCH
A minimum of 3 characters are required to be typed in the search bar in order to perform a search.
Design
19 MIN READ
Featured Blog

An exploration of VR design tips, tricks, & principles by the designer of Recreational Dreaming, a "sleepwalking simulator" for the HTC Vive.
Donald Dunbar
Blogger
February 22, 2018 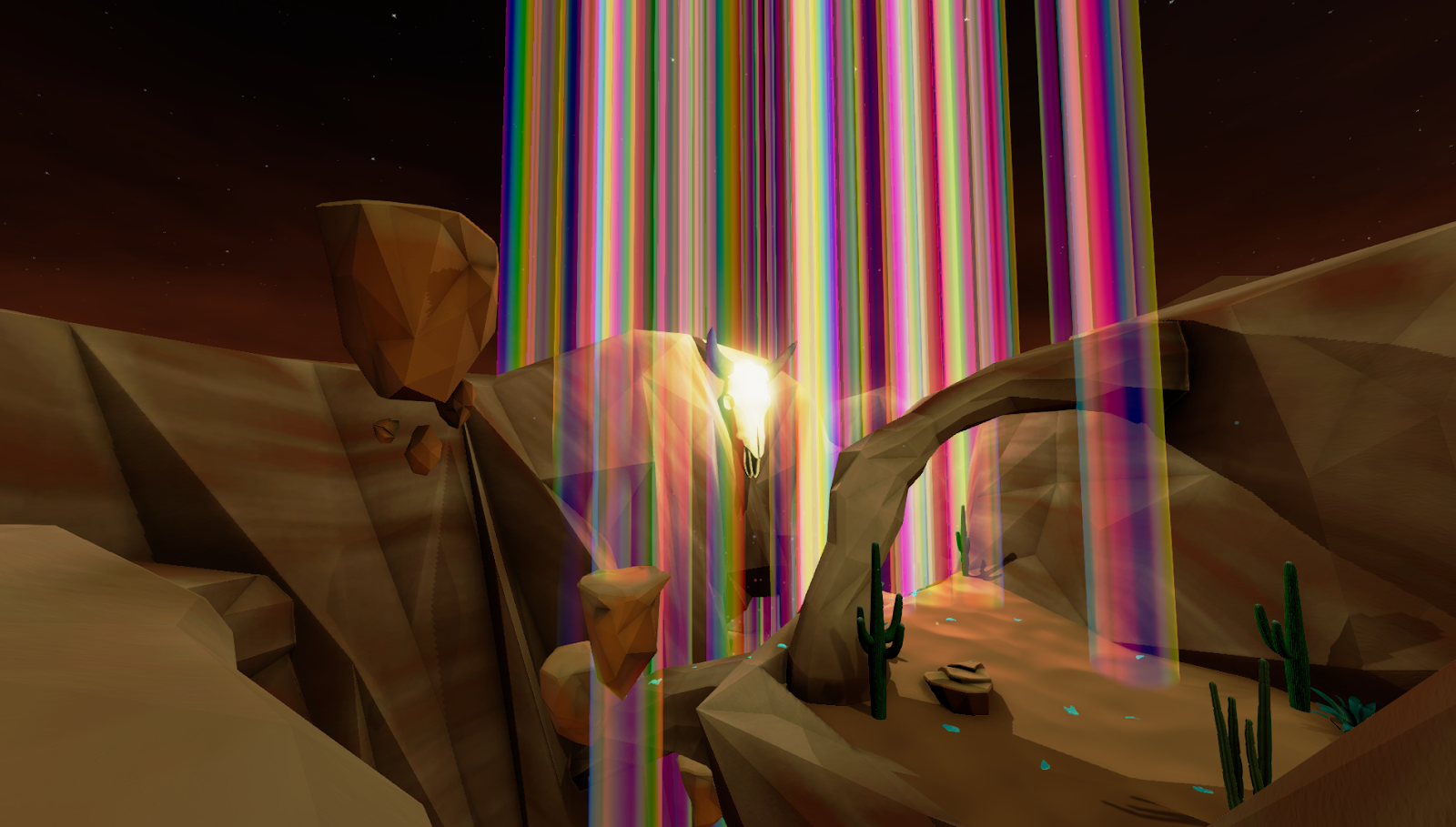 Well, it’s 100% different than initially conceived, and it took at least three times as long as budgeted for, but the first VR game I designed is now in Early Access on Steam.

Recreational Dreaming is a surreal “sleepwalking simulator”—one part exploration game, one part shooting gallery, one part scavenger hunt—for the HTC Vive. It’s a peaceful and kind game full of otherworldly events and sub-rational moods, and while it certainly won’t be everybody’s cup of tea, I’m proud and pleased that some people have fallen in love with VR through it.

Now, if you had told me a year and a half ago how much time and effort it would take to design and produce this VR game that has little chance of recouping the money we spent on hardware and software, much less replenish my desiccated savings account, would I still have made it? Yup. No question. Do I wish I knew then all the things I learned on the way? Oh hell yes.

So in that spirit, I wanted to write a post-mortem detailing not the development process (winding, recursive, both painful and joyous), but focusing instead on some of the lessons I learned about designing for VR. My hope is to give any designer starting out in this young and exciting medium a leg up, and to encourage anyone thinking about dipping their toes in to do so. I believe that the DNA of VR design is being written right now, and I’m incredibly excited to see what forms it will grow into.

I know that some of what I focus on in here will already be known or will be easily intuited by veteran designers, but the practices I’m writing about have particular importance to VR design. I’ve also included a lot of particulars that were significant to my process or deal with UX and technical issues specific to VR.

I want to thank the many people who helped me learn these things, most importantly Ryan Donaldson, my chief collaborator through most of development, and Becky Win, who offered dozens of priceless critiques over those many months.

So without further ado, the three biggest lessons from designing and developing a weird little VR game:

1. Playtest Early, Often, Variously, and with a Really Open Mind

We got lucky here in a couple ways. First, our social circles include people of a lot of different backgrounds, from many different cultures, with many different ideas of what makes a fine time. Second, we were able to link up with community organizers like Joshua Young (of the PDX VR meetup Design Reality), Tim Reha (of the Khronos Group meetup in Seattle), and Steven Parton (of PDX Creative Networking) who let us set up and demo Recreational Dreaming at their events (thanks guys!). We also invited everyone we knew and met to our workspace to “check out VR.” Well over 100 people went through our game through the course of development, and every single person had something to teach us. 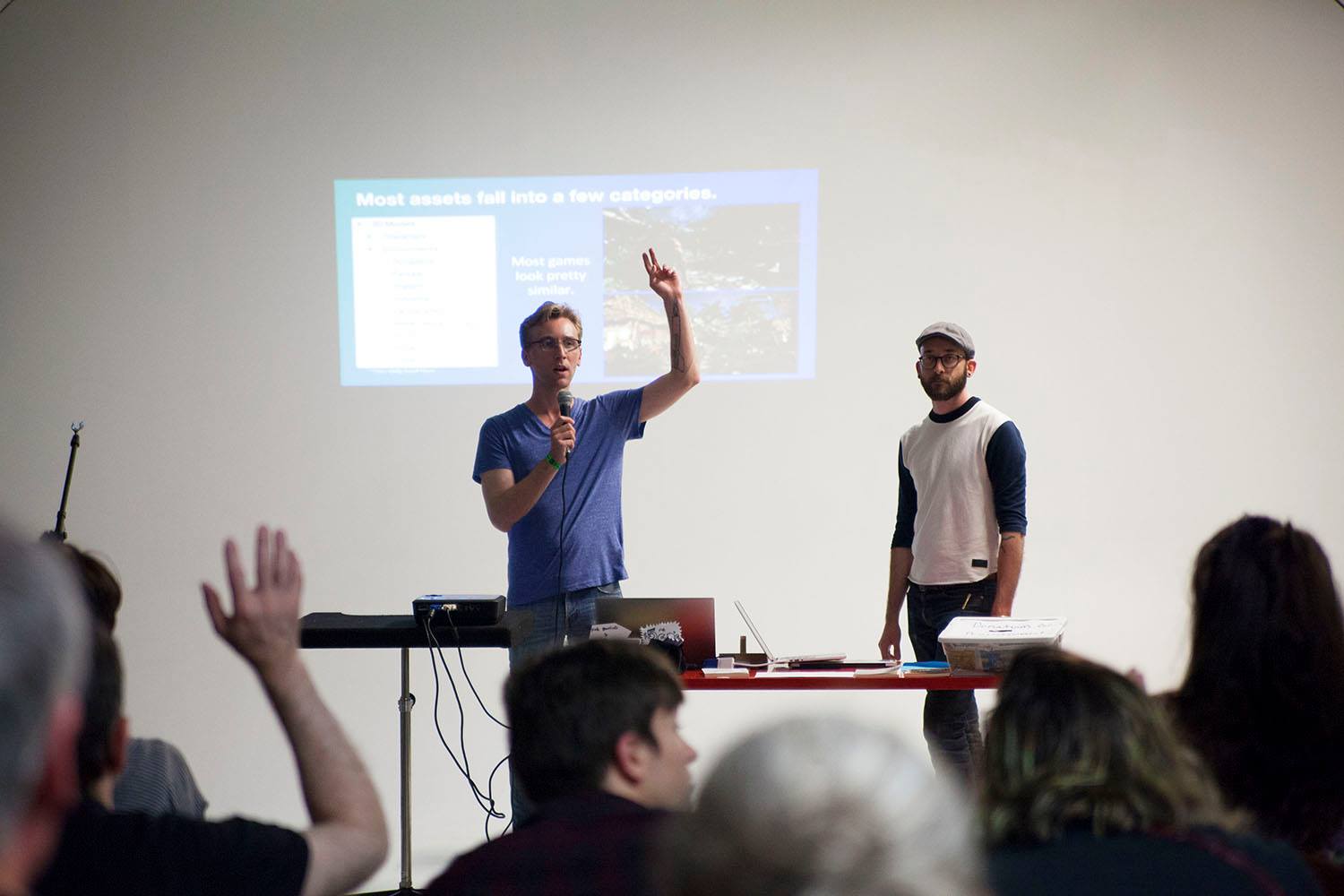 Sometimes you even get to nerd at people.

Who can you depend on for what perspective?

I want to stress the importance here of a true diversity of playtesters. VR is MUCH more idiosyncratic an experience than screen games, and if you’re playtesting mostly among people that share certain characteristics (devs, dudes, a certain age range, members of a subculture or interest group, etc.), you are blinding yourself to the real strengths and challenges of the medium, and missing out on valuable perspective. Not everyone can look at a RPG combat system and offer meaningful critique about the DPS values, but everyone can look around them and say, “I don’t like it here because of [reasons].”

Through this process we were able to understand not just many aesthetic perspectives, but also physical perspectives as well. If people wanted out of the experience, usually that meant we had to tighten our belts a little to boost the framerate back up, or tweak a visual effect, or replace a sound. If someone was a different height than us, well, maybe we had to lower the edge of the wall there so they could see over it, or increase the height of the ceiling so they don’t clip through it.

One of the most impactful playtests never even started. My friend who has only one hand was so excited to try my game, especially after I had introduced her to Tilt Brush and portions of The Lab. I had finished strapping the headset on her when I realized that because she could use only one controller at a time she would be unable to fire the slingshot, which meant she couldn’t get out of the first room. This lead to some soul-searching about what our game was really about, and caused me to think critically of this very central game mechanic.

It was through exploring this question of accessibility that I had failed (and would have continued failing) to design for that I found an answer that also addressed a problem we were having balancing the challenge of shooting. Depth perception over large distances isn’t great in VR, and we found if we offered the player no help they got frustrated trying to hit something too far away, but if we gave them an accurate aimline they found too easy. Consolidating all the game-necessary controls onto one controller allowed us to address both problems at once, increasing accessibility and giving us the impetus to design a new shooting mechanic.

The slingshot became an old metal flashlight with a gem for a bulb, which is not only way cooler than any of the slingshots we had thought up, but also

The other controller is now a camcorder. Its functions are just sugar.

Which brings us to:

2. Try Four Versions of Everything

Don’t forget: VR as a medium is still in its infancy. Maybe it’s a toddler. But a lot of what is known to “work” in VR has not yet percolated into any book, and a lot of what can “work” has yet to be discovered, much less refined. In fact, I’d argue that it’s unlikely that anyone is a true master of VR design yet, at least by Malcolm Gladwell’s “10,000 hours” criteria. Lots of what works on a flat screen does not work in the metaverse. So give yourself the freedom to revise (and re-test, and learn from) everything.

There’s still 1,000 things that “had we but world enough, and time” to change or add or redesign about Recreational Dreaming we would, but through a brutal revision process we ended up with a game way more interesting than the one we were going to make.

Pine trees uprooting themselves to flock towards the Aurora Borealis was
not a first-draft idea.

A selection of what we revised:

Sometimes people shouldn’t have to care how many shots they got left.

As for level design, that’s enough of a beast to warrant its own section.

3. Design Levels for VR in VR

We started Recreational Dreaming with our minds still stuck in screen-space. Our first sketches at the rooms and events were all done on paper, and every single one revealed at least one major problem the first time it was modeled up. We revised this process a couple different times—elongating the storyboard, using different paints and brushes, constructing dioramas—until, in one of the biggest duh moments I’ve ever had, I sketched out a level in Tilt Brush.

The old way was sitting around for a bit trying to imagine what might look cool viewed from where, spending 10-30 minutes on sketching it out, handing the sketch to Ryan who might draw his own take on it, agreeing on a version, and then it taking him between 20 minutes and two hours to model up a draft in Blender, before then importing it into the scene in Unity, setting it up with a collider, tagging it “Teleportable”, strapping on the headset and, finally, checking it out. Then, to critique the design, whoever was in the headset would do their best to describe what might need changing and the other person would do their best to take notes. We were cavemen, basically.

With Tilt Brush (or Quill or Medium or whatever), revision happens on the fly, there’s no surprises about the experience of the space, and you can painlessly start iterating on the level’s color palette while you concept. Want to do large-scale planning? Zoom way out, look at it top-down. Want to see what the player will see? Zoom on into where they’ll be. And the product of your labor is a hundred times as useful: once we settled on a design it was no problem to save it out as a mesh or as reference art to guide the modeling. The new way is way faster, way more effective, and way more fun than the old way.

Concepting a swimming pool superimposing itself over a physicalized topographical
map of a lake just doesn’t seem like the job of a pencil.

Of course, the right tools can only get you so far. Some other considerations for designing spaces in VR: 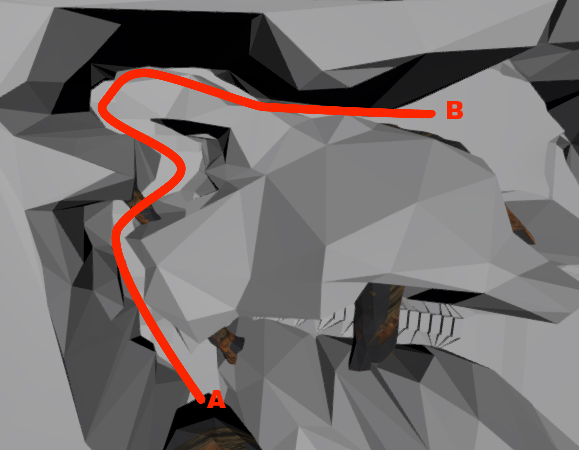 2 out of 10 playtesters successfully navigated this canyon path
in an early version of level 3, and both were other devs.

When I first considered designing for VR I was excited by possibilities that turned out to be impossible or ineffective with the current technology, and I imagine most VR designers have had similar enthusiasms. Don't be discouraged if your first dozen ideas turn out dumb! There are thousands of unique design problems for VR, and for every step the technology takes there will be hundreds more.

What I've come to understand is the chief joy in designing for this nascent medium is not the instant translation of one's imagination into "reality", but the intimate view it offers into the experience of being human. Appreciating other people's perspective, empathizing with their experience, and being able to give them such a deep slice of your perspective and experience is something this medium has the potential to do better than any other.

It might take it awhile to get there. It might even take a long minute for VR experiences to be reliably profitable. But as far as educational experiences go, I couldn't recommend anything more than carving a whole experience for other people.

And oh yeah! Give Recreational Dreaming a shot!

Donald Dunbar (@333uuu) is a VR designer and developer and a founder of the Portland-based VR studio Eyedrop. He is also the author of two books of poetry. Sign up for his very occasional newsletter here or check out his portfolio at donalddunbar.com.