Tutorials of Zelda: When Do Players Get to "Play"?

Here I took a look at my playthoughs for four Zelda titles and compare the time it takes for each game to end the tutorial and let me feel like I'm really playing a Zelda game.
Cary Chichester
Blogger
March 26, 2012

The Zelda games have--at least since Link to The Past--followed the same structure of introducing the player as an average boy of little importance who is quickly called to action to stop an impending evil. Over the years however, greater emphasis has been placed on the games’ story, and consequently the point at which the player answers the call has been pushed back in each game to expound on the plot more. While the beginning portions are used to deliver the story, this time is also used as a tutorial for the player. After they have learned a bit through the tutorial they eventually come across a “tutorial dungeon”, which is an area that gives the player the chance to try out the puzzle-solving, combat, and navigational skills that are required in later dungeons, but without any real difficulty.

It’s at this point when they arrive at the “tutorial dungeon” that the player finally gets to try their hand at the core Zelda gameplay experience. Usually after a tutorial dungeon is completed, the player feels like they have finished the tutorial part of the game and finally gets to start playing the “real” game, so the time to complete a tutorial dungeon represents the time until a player truly begins playing the “real” game. For this reason, it’s important to note how long it takes for a player to experience this. I enjoy having a story to give context to what I’m doing, but I’m sure I’m not the only one that wonders how long he has to wait before he can start exploring and solving puzzles in a Zelda game. So I took a look at four different Zelda games (because I don’t own a copy of The Wind Waker) to see how long it took me to get to that first tutorial dungeon and complete it.


A Link to the Past
Tutorial Dungeon: Castle
Time to arrive: 2 minutes
Time to complete: 20 minutes

Oh man, I totally forgot how good it feels to really start playing game after one or two minutes. Your first task after you exit your home is to find a way into the castle, so the game wastes no time in giving you a problem to solve. Once you’re in, the tutorial begins; every item you pick up will have a description on how to use it, but you’re only really told what you need to complete the dungeon and nothing extra. In this instance, the tutorial and tutorial dungeon are the same; you’re being taught the necessary information to play, but you’re learning it while storming a castle to save the princess. Because of the way the game lets you jump right into the action, this is easily my favorite starting experience of the Zelda games I tested.

So now there’s a bit of story to get through and some characters to talk to. Still, it’s not like you’re wandering around without a purpose. You’re answering your call to action from the Great Deku Tree, and you’re tasked with finding a sword and shield to progress. Both finding the sword and finding enough rupees for a shield ensures that the player will do a fair bit of exploring, including reading signs and talking to NPCs. This way the player ends up learning how to play, but the act of learning is initiated by the player and not forced onto them by the game. It may take longer to get started than Link to the Past, but it’s still a great way to let a player learn about the game while keeping them in control.

I’m on a farm.....yaaaay. Here is when they really try get the point across that you’re a mild-mannered individual of no importance. You’re given several menial tasks to complete including herding goats, buying a slingshot to impress some kids, and fishing (which is actually not important to learn). At one point when you returned a cradle to a pregnant woman, she asks you to follow her her home for a gift. Now, I don’t know if any of you have ever seen a pregnant woman move around before, but they don’t exactly break into full sprint. Having to slowly walk behind Ms. Preggers as she waddled her way up a hill made me wish I had my sword right there so I could end my misery.

You’re immediately given a difficult task as soon as the game begins: Endure all of these cutscenes! Similar to Twilight Princess, this game is in no rush to see you having fun inside a dungeon, but whereas Twilight Princess filled up time with boring tasks, Skyward Sword does it with boring tasks AND lengthy conversations and cutscenes. It took over an hour before I really started having fun with this game. THAT’S. TOO. LONG. 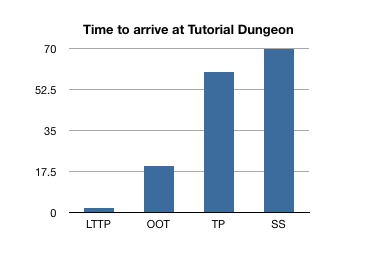 When playing through each of these games it was very apparent that the time to arrive at the tutorial dungeon was increasing. Twilight Princess and Skyward Sword in particular--in addition to having more mechanics that needed to be taught to the player--had most of their tutorial occur before the tutorial dungeon rather than during it. 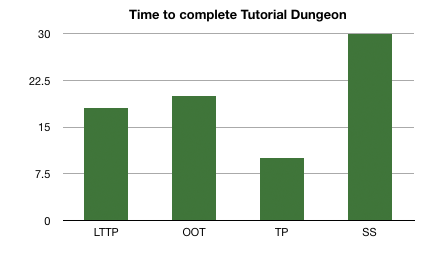 It was interesting to find, however, that the length of the tutorial dungeons did not vary nearly as much as the time to actually arrive at them. In fact if we knock out 10 minutes from the time for Skyward Sword due to how much time NPC conversations were taking up (it was a LOT), it would seem that these dungeons take around 10-20 minutes to complete. 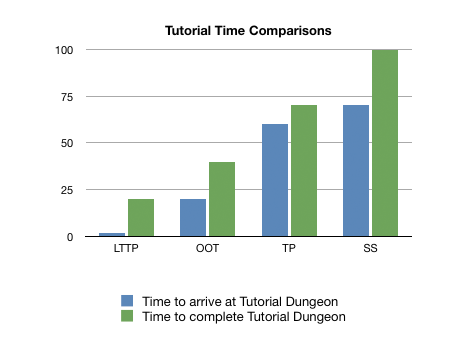 Putting these numbers together, I found a trend that seemed relatively disturbing. The blue bar for each of the games is either equal to or greater than the green bar for the previous game; this means that it takes the same or more time for a player to arrive at a dungeon in one game, than it did for the player to complete a dungeon in the previous game. If this trend holds true--and really it has to end at some point--then the next Zelda game could very well require 100 minutes of playing before the player actually arrives at a dungeon!

Over time--as Miyamoto’s influence started to dwindle from the series--we see the focus on story increasing and its negative effect on enabling the player to enjoy the game. The trend has been taking the structure for the beginning of Link to the Past and making it longer with each iteration. Sometimes these segments are for delivering large amounts of story like in Skyward Sword, and sometimes they’re for teaching the player a lot by performing boring tasks like in Twilight Princess. Both approaches need to be reevaluated; gameplay and necessary information should be considered over story and extraneous information. A player’s first moments should be exciting instead of boring, so while we may fret like a worried parent that the player hasn’t learned enough before they jump into a game, we should remember that a player should be playing a game instead of asking “When do I get to actually ‘play’?” And hey, if you can’t find a way to streamline a tutorial, there’s always the old way of teaching players. 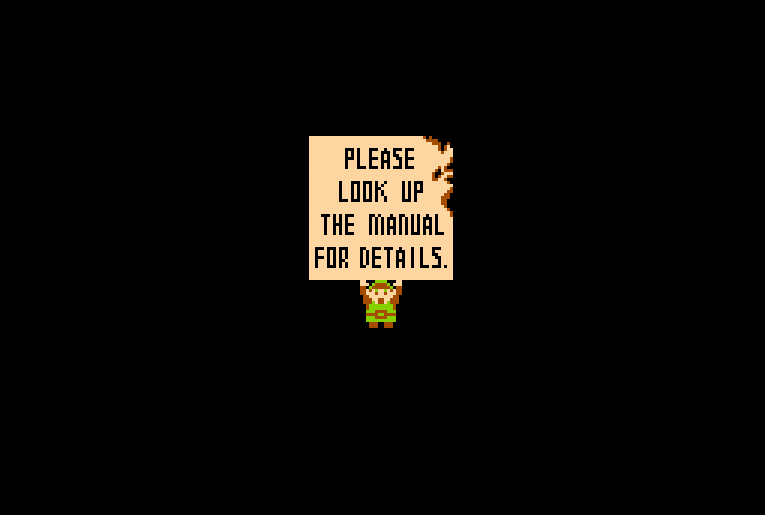