My list of the top 3+ games of 2013 (with a runner up included!), beginning with Starbreeze's Brothers and exploring my fascination with the innovative strides taken by indie developers.
Karin Cederskoog
Blogger
December 31, 2013

Brothers: A Tale of Two Sons

I was actually sent this game as a gift from a friend I made through Gamasutra (thanks Gamasutra!). I was immediately enchanted by the gameplay, setting, and lack of an actual language for in-game communication. What really made this game special for me is that it can be played by two people on one controller, so my younger sister and I set out to explore the world together – her as the older brother and myself as the younger brother. It wasn’t as though we intentionally decided to ‘switch roles’ in that sense. It had more to do with where we happened to be sitting at the time, but it added an extra layer of realism and charm to the gameplay experience. (We hadn’t really played a 2 player puzzle type game together since back on the PS2 with one of the Lego Star Wars games.)

There were many points throughout the game where our own dialogue and actions mirrored the dynamics of the two brothers, which I credit to the fact that Starbreeze Studios did a fantastic job of integrating nuanced sibling dynamics. Given natural ‘sibling dynamics,’ we teased each other about the things our character was able to do that the other one wasn’t able to do (such as my being little enough to slither through the iron bars in doors). Plus, given that we were huddled around one controller, we were really able to show our displeasure over having to restart a checkpoint when one of us screwed up, since we could physically ram into the other.

One of the more humorous elements was when we swam for the first time, and my sister (being the big brother : ) ) swam ahead, leaving me to drown. It took us a while to realize the little brother actually needs the big brother’s help to get across the water, a point that exasperated her each time (it’s all about running ahead of the other and accomplishing things before the other sibling has a chance, right?!) and had me teasing her about needing to slow down and help out her younger brother (again, this point was made more humorous due to the fact that she’s the younger sibling in real life).

This is where the game design really showed through – instead of allowing our sibling dynamics to negatively impact gameplay – with each of us racing to accomplish puzzles before the other had a chance – the puzzles/gameplay were created so that certain components were rendered impossible without the other brother. Both brothers (and us sisters!) had to work together – the big brother forming a foothold with his hands to raise the little brother to a ledge above, so the little brother, in turn, could open a gate to let the big brother through.

Starbreeze did a fantastic job of creating a game that is constantly fresh. I was overwhelmed by the beautiful and constantly changing scenery…one element of the story leading directly to the next (without bogging the gameplay down with the long cutscenes prevalent in many other games nowadays). There were enough new puzzle elements introduced along the way so that puzzles never felt stale. The game designers did a phenomenal job keeping puzzle elements fun and engaging, carefully eliminating the

frustration and confusion that often accompany puzzle games by creating puzzles that were simple enough to maintain the momentum of the game, without also compromising the quality of the puzzles.

An added bonus though for us Skoog sisters is that Brothers is another example of one of the many innovative games coming out of Sweden, a country that plays a role in our heritage (last name even) and family customs. In fact, the troll in Brothers resembles the trolls on postcards I brought back to min syrra from my travels to Scandinavia this past summer.  :  )

This game was recommended to me by a game developer friend as we were discussing my own design ideas. I was working through the “best way” to approach puzzle design without adhering to a ‘single answer approach,’ instead allowing puzzles to be solved in a variety of ways due to the insight of the player. While that’s a complicated design challenge I’m still working on, Antichamber was a fantastic exploration of puzzles that challenge the player to open the mind, essentially leading on the principle that faith can lead you through the game – faith in Alexander Bruce’s design skills to guide you toward moments of clarity, and faith in yourself as a player to make the breakthroughs necessary to solve each puzzle.

When I started playing Antichamber, I honestly wasn’t sure what to make of it. As I told my parents that day, “I’m playing this game…Well, maybe game isn’t even the best term to describe it. I have no idea what’s going on, but it’s a really interesting experience. I wonder when (and if) I’ll really ‘get’ what’s going on in this game.”

every time I go back to it, I see solutions I didn’t see before. It’s one of few games I wanted to savor, so as to suspend this awesome mixture of awe/confusion and ah-ha! moments for as long as possible. Even now, I’m thinking about a specific puzzle from the very beginning of the game that continues to mystify me. It’s intriguing to wonder just how long it will take me to figure out how to get past that puzzle and what other puzzle(s) will lead to that moment of clarity.

I’m not going to write too much about this game, as it’s a game you should experience for yourself, if you haven’t already. The quirkiness of this game is what really gets me. Near the beginning of the game, I stood in one place for a while, reading something, and the narrator made a great comment about my

standing around, doing nothing. It was definitely a Stranger Than Fiction kind of moment and served as a funny moment for a family member who happened to be in the room while I was playing.

As opposed to the standard model of the player following pre-determined narrative paths through a game, it feels as if the game is actually following you. This makes the game feel more self-directed, so that any action or turn you take is a part of your own gameplay experience and not (as in so many games) strictly determined by the developers. Of course, this claim is humorously ironic, as every aspect of games are pre-determined, though the narrative is pushed forward without the player adhering to one linear pathway, an aspect that I greatly appreciate.

Okay, so this list doesn’t cover 5 games from 2013, mostly because I haven’t made it to as many games in my backlog as I’d like for the year. There are plenty of games I’m sure are deserving to make it on this list (like Papers, Please, which to my knowledge, doesn’t play on the Surface at the moment, so I haven’t checked it out yet). In fact, I mistakenly thought Dear Esther came out this year and was going to add it to this list. I suppose when game development is in full swing, it makes it a bit trickier to balance out game development with actual gaming and keeping track of which games come out in a given calendar year!

This game is just pure fun and an awesome throwback to the challenging games (to say the least) of the past. It serves as an ode to many of the frustrating games on the NES, SNES, etc. that the Angry Video Game Nerd plays and reviews on his webshow…reviews that sometimes result in him destroying game cartridges or taking down ‘real life’ versions of in-game characters. The AVGN Adventures replicates the idiosyncrasies (or idiocies, depending on your definition) of older games…complete with one-touch death cubes and bosses that take an incredible number of hits to defeat. 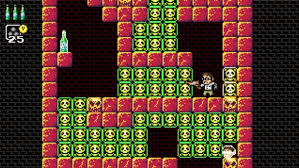 I both appreciate this game for what it is – a very difficult platformer – and for incorporating references to the Angry Video Game Nerd show and older games. Definitely check it out if you’re a fan of AVGN!