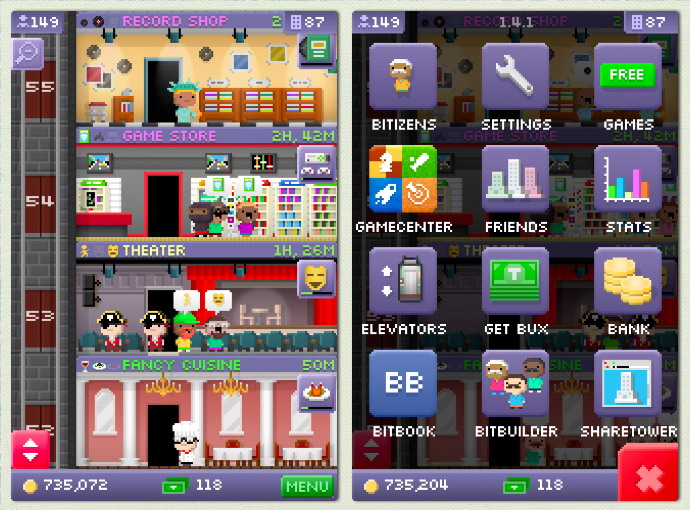 Tiny Tower is an iOS game developed by NimbleBit. Just like their previous hit Pocket Frogs, Tiny Tower is also a freemium game. It was the game that I spend countless hours playing, occupied most of my leisure time and drained my iPhone battery a lot in the past 2 months.

“You got hooked.” she said. “No. I didn’t,” and then I swiped the screen lock, tapping on the app icon to fiddle with my tower.

Even my girlfriend’s iPhone frequently got exhausted because of playing Tiny Tower. “Have you restocked the shops today?” “My newly open floor is a Museum!” “Hey, I’ve got 69 Bitizens working in their dream jobs.” These conversations become part of our daily lives.

I don’t know from when, I choose to check my tower to stock shelves or construct new floors first thing in the morning instead of freshening up. When I’m about to sleep at night, the last thing I do is to review every floor to make sure if there’s any store still needs to be stocked. Listening to that familiar DING (the game’s sound effect) makes me feel comfortable and satisfied.

Although human was severely punished in the story of Babel, destroyed by God’s burning anger, it’s forever part of human nature trying to reach beyond the clouds to explore the sky above. History always repeats itself for we humans are forgetful creatures.

As the almighty lord of Tiny Tower, what players can do is not actually so much. When sufficient coins are earned to expand new floors upwards, players have 6 floor types to choose: Residential, Creative, Retail, Recreation, Service and Food. Players can only decide what type of the floor they want to build, but not until the construction is completed, they won’t be able to know what kind of store it will be.

The habitants in the tower are called Bitizens – as they are built bit by bit. Players have to build Residential floors first to let Bitizens move in, and then assign the right Bitizen to the right job – to put the most efficient Bitizens in the most suitable stores in order to restock more goods and pay lesser coins.

There’re 2 currencies in flow in Tiny Tower – coins and Tower Bux. Coins can be used to build new floors or to order goods and services at various types of stores. The main source of coins is the income from selling goods and services, which may take from a few minutes to several hours. However, the clock keeps running in real time even when players are not playing so coins continue to accumulate till all items are sold out.

On the other hand, Tower Bux is used to speed up construction or deliveries of goods, to purchase faster elevators, or to exchange for coins. Although it can be purchased with real-world money, players will not miss out any content of the game if they refuse to purchase Bux, which can easily earned through in-game activities such as tips from elevator users, rewards for helping find a Bitizen, or for fully stocking a shop.

Tiny Tower is a type of simulation social game, and in this peaceful little tower, there’re no challenging gameplay and highly upbeat moments. Particularly, it has no glory time to defeat opponents, and no game-over screen to taunt you about your failure. In a word, the core game mechanism built inside Tiny Tower is -- Randomness. It makes use of randomness in the following aspects:

There’s not much room left for players to carry out their strategies. Most of the outcomes depend on your luck and the randomness. If you are the type of player who used to play traditional games, I bet you won’t be very comfortable with it. “Hey, I thought games are about interaction and choice, aren’t they?”

Compared with strategy-centric core games, the elements in lightweight games are usually composed of much more ‘luck’. When luck plays the central role in the game, everyone has a good chance to win, whether he is skilled or not. This game is not really about testing your controlling skill or reaction. ‘Anyone can be in luck and hit the jackpot’ is the reason why this genre of games can always draw in players.

Jamie Madigan introduced a psychological term called ‘benign envy’ in one of his articles. He claimed that seeing friends owning the floor we want excites our will to spend real money to buy it, and it may greatly help increasing Tiny Tower revenues.

Yes, I believe it could help NimbleBit to earn big money in a short period of time; however, it might cause an opposite effect of losing players very quickly as well. It doesn’t matter what players’ goal is; as long as it could be achieved simply by the money players have, they will spend what they can afford to get it, and then lose the motivation to keep playing the game.

Randomness is the core foundation of game mechanism in Tiny Tower. Players have to ‘get lucky’ to build the floor they desperately want, and it is exactly the reason why they’re willing to keep playing and playing.

From the aspect of its basic gameplay, Tiny Tower seems to be no different from other common social games. If it was just another ordinary social game, the steps players are expected to take will be: launch the game, tap, tap, tap, done, and leave the game.

Conversely, why do players keep coming back to play it? Some essential motives are: Comparing with what spending coins can achieve, Bux is the most crucial resource in Tiny Tower and it can be used in: The valuable Bux can be purchased with real-world money from In App Purchase options. However, players can also easily earn Bux through in-game activities, without paying a dime:

Those in-game activities (getting the tips, fully stocking a shop and finding Bitizens) are the main attraction of the game that gets players hooked, and makes them willing to repeatedly bring the elevator users to their correct floor, which is quite a monotonous and tedious job.

The catch here is that time durations for delivering different items varies widely. The deliveries of goods can take 2 minutes to 12 hours, and even when new items have finally been delivered, they can’t be sold until the player returns to the game to stock them. It makes players feel obligated to constantly return to the game to keep stores stocked.

All these well-designed ‘unscheduled rewards’ added up brings players unique stimulation and joy, which is strong and hard to resist.

Unlike most social games, Tiny Tower provides players with only 3 price options for purchase:

$0.99 option is for impulse buyers. Any player who enjoys the game more than 30 minutes would agree that it is not a hard task to earn 10 Bux or more – the only thing you need is a little bit of patience. However, when our desire defeats our intellect, for we want to get what we want right away, this is the best option for us.

$4.99 option is for rational analysts. You just need a quick analysis to figure out that this is the most reasonable option for general players. Some people might argue that $4.99 is too expensive and it would be better if it priced $2.99. However, when we decide to spend money on what we want, just a few dollars more doesn’t matter much.

$29.99 option is for whale players. Although most of us will never spend that much money on a mobile game, and may consider it as a ridiculous behavior, we should be aware that we are simply not the so-called whale players. Whales are very rare, but a large part of profit often comes from them. The initial game tutorials teach players how to use Bux to save their time to speed up building new floors and stocking items. And the game always offers players Bux generously. It makes players happy and let them feel free to spend Bux rather than saving it cautiously.

Tiny Tower demonstrates the benefits of spending Bux first, and then teaches players to form the ‘good habit’ of spending Bux. Finally, players might willingly buy the in-game resource with real-world money when they need more. The monetizing options in Tiny Tower are not so strong (intrusive and disturbing) as other freemium games. It might get lesser potential revenue in the short term, but I believe it has earned players’ devotion and trust in the long run.

Sometimes, too many options equal no option at all.

If you are the same type of player as me, who enjoy analyze various optimized strategies in games, we might feel the same pain while playing Tiny Tower.

There can be at most 3 products being stocked in each floor, and the efficiency reaches its maximum when the floor is fully stocked. Hence, any player immersed in this game knows he should keep floors as busy as possible. In short, keeping every floor fully stocked is the best strategy for the game.

While delivering items, we won’t be able to know the stock quantity of other items in the same floor, nor can we know when they will be sold out. When we wait for the delivering to be completed, it is very likely the floor is out of stocks and closed.

To maximizing the profit, we have to speed up the stocking process. “Spending just 3 Bux can save 3 hours for me.” It seems to be a very nice deal that spending a little resource could accelerate income and efficiency, so we will do it without any hesitation.

Tiny Tower has no decaying or punishment mechanism. So even you don’t play it regularly, your floors won’t get collapsed or polluted. However, if you strive to play at optimized strategies, you’ll find yourself play it constantly and spontaneously. If you don’t take action and do something, you’ll waste the chance to get the advantages. It is just like an itch you must scratch.

We are unconsciously confined by our own rational mindset even while playing games. Perhaps we shall, sometimes, dare to enjoy the fun with irrationality, and it may free us from the cage of ‘optimized strategies’ mindset. Every classics game creates one or more amazing moments that are hard-to-forget for players. Many years later, we might forget the combo skills, the final boss or all the other details in the game, but it is the magic moment which we won’t forget and would be happy to share with friends.

The first amazing moment Tiny Tower brought to me was assigning Bitizens to work in their dream jobs. “What a wonderful world it would be if everyone works in his dream job!” However, after immersing myself in the game for a couple of months, and the accomplishment rate of dream jobs in my tower has been over 90%, I’m now looking forward to building my dream floor.

Have you discovered your magic moment? Welcome to my Tiny Tower!