Time for a timer! - Effective use of timers in game design

Any seasoned player of video games has been in this situation. You've just been nailed by a boss' deadly attack, you're on 2 health points (out of a pool of 2000), but the boss is on its last legs, one more solid attack will hit it. You could run away and heal, but the boss might start that attack you can't dodge, or he might hit you before you heal. Your pulse quickens, your eyes narrow, and with a feeling that can only be described as a kind of lurching "what am I doing", you charge the boss and go for the kill.

That's tension, in its most recognizable state. But there are a lot of components of games that can be used to heighten tension, some more common than others. In this humble blog post, I will be elucidating one such often overlooked mechanic: the humble timer.

It might seem a little bit rubbish to talk about something as mundane as timers. But get your finger off of that scroll wheel, there's more to it than you think.

By a timer, I mean a clock on the screen counting up or counting down to something. It could be a small clock in the corner of the screen humbly counting up how long you've taken to clear a level in seconds, or it could be a Super Metroid-esque final escape sequence with a huge flashing timer letting you know in no uncertain terms that YES YOU ONLY HAVE 39 SECONDS TO GET THE HELL OUT RUN! GO! Timers come in many shapes and sizes.

I'd delineate two key types of timers: Reminders and Warnings.

A reminder timer is one that sits there idly, just giving you an indication that something's going to happen. Persona 3 features a countdown to the next full moon event, Majora's Mask features the omnipresent countdown to the end of the world, Dead Rising has its ever-pressing time of day in which missions are structured around the day and time, and Final Fantasy: Lightning Returns centers its entire narrative about postponing the end of the world and showing the player just how long they have left at the end of each day. These timers act as gentle reminder for when the player's eyes inevitably wander about the screen. 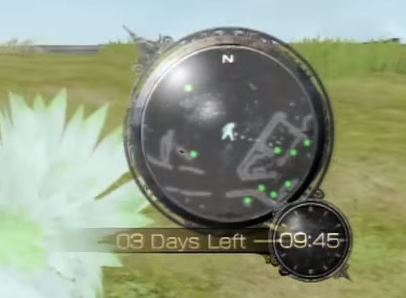 Perhaps the player is busy exploring an optional area or has elected to exterminate the native rabbit population, not-so-uncommon occurrences in some games. But then their eyes hit that timer, the clock, it reminds them of their objective, what their goal is. It's a little like having "REMEMBER: SAVE THE WORLD" on the screen at all times, but without the garish lack of trust in the player. Moreover, it lets players plan their time as part of the gameplay. "Alright", an intrepid player may ask, "If I hand in this quest here and then travel there using the train, I can probably finish that quest before i'm scheduled to meet her." Planning becomes part of the gameplay, and the player becomes involved at every step of the decision making process of the game. It provides subtle pressure to encourage the player to manage their time wisely and not dilly dally too much.

Of course this has its downsides. Many players complained when Dead Rising came out because they felt the timers limited their ability to have fun goofing off doing what they wanted. There's a balance to be reached in how much player freedom a reminder timer should offer the player. Dead Rising was simply a case of having too strict a time limit, and Dead Rising 2 managed a much laxer schedule of events by giving players larger amounts of time between main story events.

A Warning timer, on the other hand is not quite the polar opposite, but it's close. The warning timer attempts to induce panic, tension, and excitement all in one frantic warning. If a reminder timer is saying "Remember to save the world", the equivalent message written in terms of a warning timer might be "RUN, THE WORLD'S ENDING GO GO GO! HURRY!"  This can be counting up, believe it or not, too. A timer in a time trial is very similar in function, giving the player a countdown to failure; the player is thinking "If I don't get past that jump by 25 seconds, then the run is over." It's something speedrunners will be very familiar with, but I'll get onto them later. The design of a warning timer is also an interesting tidbit to think about.

Consider Danganronpa, a game I keep bringing up for its gameplay despite it being primarily a visual novel. During the class trials, the game is trying its absolute hardest to make the player feel tense. To understand my point, you need to know what a class trial looks like. So take a second to watch this video around the 16 minute mark.

As the video above demonstrates, the camera spins dizzyingly from character to character as they give their testimonies, words fly across the screen demanding to be shot down, fast-paced techno breakbeat plays in the background, and sharp angular lines in the user interface give the section a unique feeling of harshness and, my favorite touch, when the player holds the right trigger, the whole affair goes into slow motion for "concentration mode", whilst also flashing up a very very distracting pattern of the word "ALERT CONCENTRATION" in the background accompanied by a very very distracting high pitched beeping, amusingly and counter-intuitively distracting the player. And then there in the corner is a countdown. It's in the format 00:00:000, and the player is usually given around 5 minutes to figure out the correct statement to contradict, a process that typically takes around 30 seconds. So immediately this should raise some questions:

Well the simple answer is it increases the tension. The countdown timer isn't really there to increase the challenge, it's there to make the player feel more pressured. Similarly, the reason it counts down to the microsecond is to make the timer more visually obvious on the screen; it's this flicker of movement in the corner of a screen that is full of movement, and microseconds create a hint that it's possible, maybe even likely, that the solution will be so difficult that it could come down to a photo finish, so to speak. Of course, it is possible to fail because of running out of time, but this typically only happens when the answer is obtuse or the player doesn't "get it".

It's not like these timers are particularly hard to implement, but they are often overlooked in the game design process as being an archaic trope from yesteryear, a nonspecific golden time when success in a game was measured by how long you could eke out those last few seconds of gameplay at the arcade. But effective use of timers is just another tool in the designer's arsenal that allows for the manipulation of the player's mental state, and to pass over such a simple, easily implemented facet of a game's user interface is to deny a very worthy part of the design process, often because the developer is afraid of pressuring players for fear that it will make them stop playing the game. So use timers, they're simple but powerful tools for guiding the player's mindset.