I was pretty satisfied with a recent twist on a char concept for our accelerometer arcade game "Arc & Ani", and I wanted to share some of the process with you guys.  Not so much the lego-building of 3D, but more about the thought process in the design.
Andrew Miller
Blogger
February 19, 2016

We have been hard at work on the project after a successful demo a few weeks ago at Brewcade here in SF, particularly focused on creating new boss enemies and NPC's that are interesting and challenging for the Player's accelerometer movement. 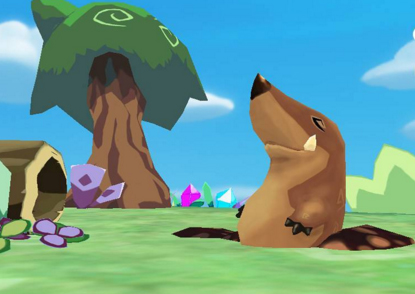 We have unveiled this character, "Dig," a while ago in an animation trailer and have been working on his gameplay for some time.  It's changed quite a bit (except for the fact that it's based on him burrowing), and we've always considered him being an NPC neutral-enemy type that affects your character somehow, though his role has never been cast in malice.

Recently the team has decided that Dig becomes the Shop NPC for our game, as many people comment on how cute and friendly he appears to be.  But we also knew that we wanted him to still be an NPC encountered in the wild with a similar style to being a passive interactive character.

And then one day, we wondered, "What if you fight Dig first as a BOSS?"

For this change in development, we had a few things to consider.

Those questions, plus a few more, influenced my design process.  Since I had already built and animated Dig and assigned a basic behavior to him, at least we had something to run with.  Initially, we thought of as many ways we could make his basic burrowing-and-emerging from the ground into a fun and slightly challenging experience.  We came up with a few whack-a-mole variations, but they weren't sticking, and we felt that the current arena size (cube) was too small based on the speed of the Player's characters: 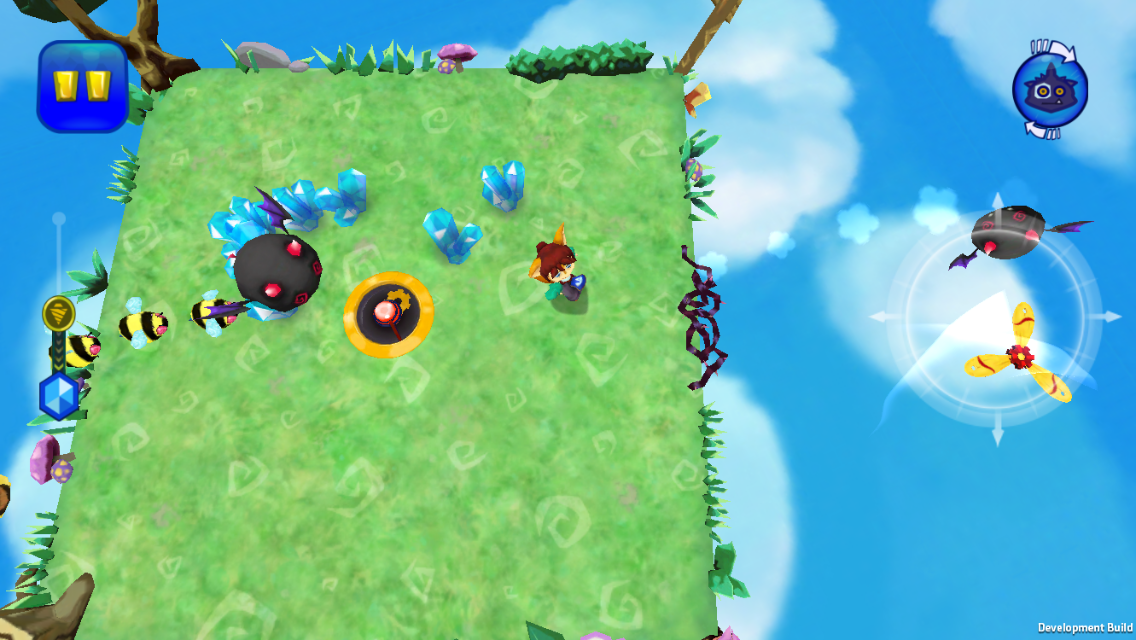 Soon enough we thought of using the negative space around the cube for this encounter, "What if Dig has a vehicle that allows him to fly around the cube?"  We have used our negative space thus far for flying or floating NPCs as they close-in on their target, and often we associate anything out-of-range with Ani and her trusty boomerang.  If Dig's Boss encounter had the Player fight him on ground and in the air, then we would be encouraging one of our core systems in the game: Character Switching for melee versus ranged.  I started to sketch ideas that related to his nature and what we wanted the behaviors and pattern ideas to become: 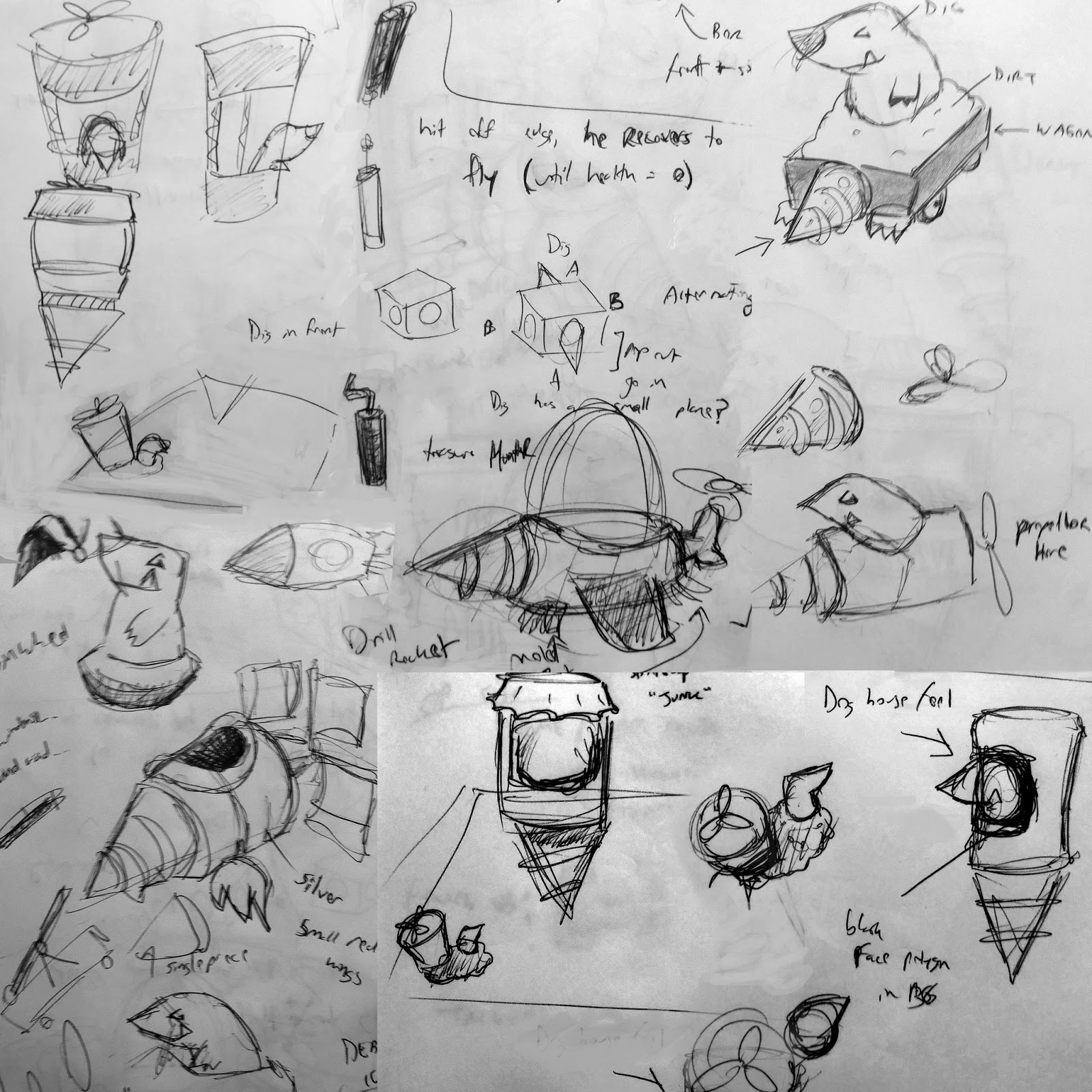 Because of his friendly nature and perhaps the overall style of the game, I had to keep the design friendly in appeal.  A drill placed on the device was perfect because it related to him being a mole and to the heroes' Crystal Drill that they are defending throughout the campaign.  I considered putting it on the front of several designs, including a small plane, a flying wagon filled with dirt, a space rocket, etc.  All designs were nearly taking a similar shape - drill on one side, Dig sitting in the main compartment.

Our 2D UI/UX Designer Jun pointed out how if the propeller was on the back of the vehicle in one of the sketches, that it might make sense to fly vertically.  We started to experiment with this shape and saw Dig throwing something out of the flying vehicle - a good basic tactic for his ranged behavior.  This was Jun's sketch of that simple idea: 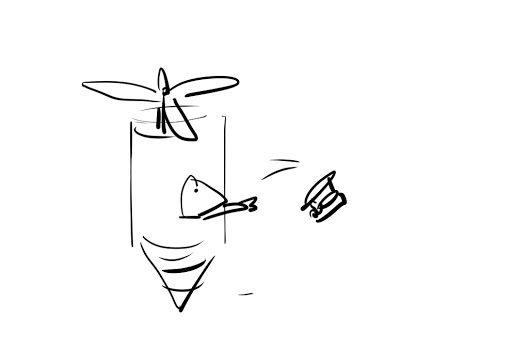 So we had an idea for his ground phase and an idea for his outside-of-cube phase, and now we had to link them through player interaction.  After some more sketching, I started building the 3D model and prepared it for texturing.  Somewhere during this phase, I got really excited because I was able to tie in another aspect of this character - the shop.

Lore is pretty important when considering a design.  Even in our game that's not "story heavy," you'd be surprised how much lore or context is thought of when developing characters or gameplay.  Dig is a character out in the wild who burrows underground and probably bumps into odd treasures, hoarding them (now) inside his vehicle-drill.  What if I can design the same Drill to be his shop?

The Player will encounter Dig in the campaign, and in a fight-or-flight moment he defends himself - he's not such a bad guy after all.  In fact, after the encounter, Dig becomes a local shopkeeper and will sell the many funny avatar items that you can find in the game. 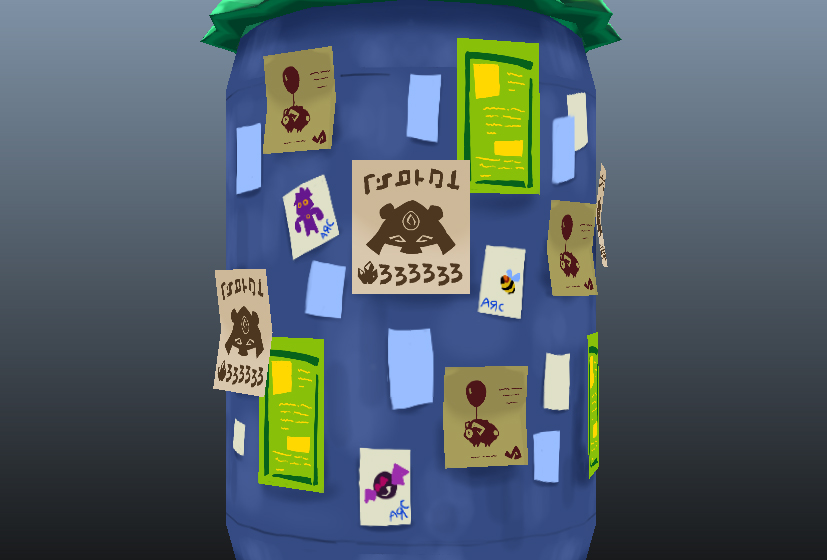 My two favorite parts of the vehicle design are not the thrown dynamite object or the giant drill, but rather two other features: a bottlecap shape on the top and the bulletin board on the rear side.  I included a bottlecap design on the top because it's an interesting shape and it ties into Dig's theme of collecting junk.  The bulletin board on the rear side came to me probably from living in the city and seeing those cylindrical bulletin stands/restrooms or small vendor stands, and I kind of married those ideas together.  I illustrated a few things on the posters on the back of Dig's ship/shop for fun (technically, Arc drew and signed 3 of those pictures....).

Anyways, I've rambled on.  Look out for Dig and his ultra cool vehicle in the upcoming game!  We are pushing for a Summer launch, and you can follow us on Twitter or Facebook