The Varying Degrees of Death in Games

Death in game design is a varied concept and today's post examines some of the factors that go into it.
Josh Bycer
Blogger
March 07, 2013

For as long as video games have been around, there has been the concept of death or failure. From the hardcore rogue-likes where death sets you back at 0, to games where it is just a nuisance and even those where you are immortal.

Death is an important concept to consider in game design... no matter how deadly it sounds.

It's important when we discuss the concept of death in game design to talk about our roots. The concept of death and game-over first started in the arcade, where game-over meant just that. Early video games were designed to be quarter munchers: featuring over the top difficulty to force gamers to continue spending money.

There were two reasons why arcade games adhered to this system. One, in order to turn a profit, arcade machines had to continually earn money and that meant needing people to constantly put quarters in. The second reason was that most arcade games weren't that complex: featuring a lot of levels but of the same design and increasing difficulty. The thrill was seeing how far you could go on a single quarter, or beating the high score on the machine.

As more sophisticated games and technology started to appear, several concessions were created. First was the concept of passwords: allowing the player to return to a previous point in a game either after running out of lives, or simply when they want to play again.

Second was the development of saving the game; using battery backup technology in the cartridge. At this point in the industry, due to the cost of it, most games that featured saving were for longer titles such as RPGs.

It wasn't until the 3D generation of consoles that the act of saving the game became a standard feature. With the standardization of saving games, the concept of death in mainstream video games became less tense, as dying just meant reloading the previous checkpoint. For people wanting death to be brutal, niche genres like the rogue-like were an available option.

But, this meant as a whole that designers needed to figure out a way to make games tense, without the fear of losing progress. And in return, this set the stage for a redesign of what death means in games.

Examining death in game design, there are two elements that have to be considered: what can be lost and punishment. Lost can be just about anything: time spent playing, experience, in game money etc. While punishment is something we don't see as often and revolves around dying have an after effect.

Time spent playing is dependent on the overall length of the game. In a rogue-like where a general play through is only a few hours, being sent back to the start isn't that bad. The same can't be said about playing a forty hour RPG.

There is a debate among RPG fans over whether dying should force the player back to the previous save, or just send them back to town with a small penalty. Fans of difficult titles say that it increases the tension of the game, while the latter feels that it is too much of a step backwards.

With the Etrian Odyssey series, death meant seeing a game-over screen, while in the fourth title; you can set the game to "casual mode": where dying simply sends you back to town. This seems like the best way of having both worlds, by allowing the game to cater to different groups without having to change the game design.

Sine Mora was one of the hardest games released last year, putting the player into a position where one hit could leave them unable to win.

But for people who like to play games on hardcore mode (death deletes the character) or rogue-likes, there is a thrill in the fact that you only have one life.

At Game-Wisdom, we have been enjoying playing Path of Exile on hardcore and it is true that you play differently when death is final.

A remnant of the time spent category from the old days would have to be the lives system: where once the player ran out of lives the game was over. Nintendo is the only company that comes to mind that still makes use of it for their Mario games. Even though the concept of game saves has made them obsolete.

One area that designers have thankfully moved away from is "memory deaths": wherein something that would instantly kill the player without giving them any clue about the trap. Making the only way to know about it, was to fall for it once and lose and then remember where it was for the next time.  This was simply cheap design as it only served to slow the player down and basically punish someone new for playing the game.

Now losing in game resources can also work as a proper punishment, depending on the rate the player can reacquire them. But you do need to be careful in titles where the player has to spend money to recover their vitals or repair their equipment, as they may not have enough money if they kept losing it to get them back to full strength.

Moving onto the next category, one of the most popular forms of punishment is the use of experience debt: Where the player can no longer earn any experience until they have paid it off.  While in the shoot-em-up genre, dying will make the player lose any power-ups they have found over the course of playing.

You should never adopt a penalty system that actively forces the player to stop playing the game due to escalating penalties. One of the more annoying examples that I saw was from the first Guild Wars: where every time you died, you received a stat penalty that stacked multiple times. Eventually forcing you to quit the section you were on due to you becoming too weak.

Now, there is a debate in skill based games over "the perfect run" design: Where the game is actively designed for the best players to have an easier time by not dying.

This is what we see in shoot-em-ups such as Sine Mora that was released last year. The game was definitely aimed at the hardcore fans of the genre, as the later difficulty and stages would absolutely demolish a player if they couldn't preserve their upgrades. 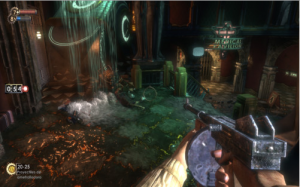 A mode making the player mortal in Bioshock eventually came. However, they did not  balance the game under the new conditions.

With that said however, you still want the possibility of failure over the player's head as without it, much of the tension and excitement of playing is lost.

One of the trickiest elements is to give the player immortality while still providing meaningful rewards and threats. For example, the next two games will show the right and wrong way of handling it.

In Bioshock, the player was immortal via the use of vita-chambers throughout the world. Dying simply sent the player back to the nearest chamber with the world remaining unchanged. The problem with this was that the game lost all tension and every challenge in the game (except for the final battle) could be overcome by basically slamming into a wall until it broke.

In the game: Demon's Souls, the player was immortal, but the developers managed to provide tension and challenge through its death mechanic. When you died, the entire level's enemy population respawned and your experience drops to the ground in the form of a blood stain.

If you can make it back to your stain, you would get the experience back plus what you accumulated since. Die again and that experience is gone. The design of Demon's Souls was more refined in that regard compared to Bioshock, as the game wasn't balanced around the player being immortal, even though they technically were. Since the world reset upon death, you couldn't play the game by rushing through and challenges had to be conquer on that specific run.

After the release, a patch for Bioshock was released that made the immortality optional, but this did not fix the issue with dying, as the game was balanced on the concept of player immortality. The amount of damage that Big Daddies did was enough to kill the player very fast. When you add in the speed that they moved and their accuracy, the player could not use quick movements or strategy to take them out. 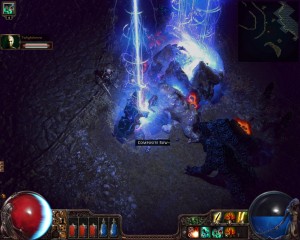 Playing Path of Exile on hardcore mode requires a more careful strategy then playing on normal.

Interestingly there is one exception where not only was the player immortal, but the entire game design was based around it.

Regular damage would just push him back and make him drop coins that were used for mini games. Special damage would temporary transform him into a special form that was used for puzzle solving.

IE: Get squashed by a heavy object to become flat Wario who could then fit in small gaps. By removing any sense of danger, it allowed the player to focus entirely on the puzzle solving and working towards the different endings of the game.

The challenge about handling death in games is that some of the most engrossing games have the risk of death, but the game cannot be balanced around the player dying.  As failure should never be forced on the player by design, but exist as a condition of the game. As a designer, you know when you have something, if after the player dies they are still compelled to keep playing.