The unique and solitary story of Pinstripe

"Everything has been done by me, including music, illustration, design, and marketing,"says Thomas Brush. "I'm hopeful that the cohesiveness and personality shine through in the game as a result."
Kris Graft
Publisher
December 14, 2015

Pinstripe is absolutely gorgeous. It's also intricate, intriguing, impressive and created by a single individual, which not only makes it all the more impressive, but also a testament to what a talented and determined artist can achieve when working for four years: one of the most promising indie arcade adventures ever. And from what I've seen in the preview build I spent a couple hours with, Pinstripe already delivers on each and every imaginary promise it ever made.

Could you please introduce yourself?

I'm 25 years old, and love making games. I am the creator of Coma and Skinny, and am currently working on a game called Pinstripe, which is set to be released on Steam and iOS.

How would you describe Pinstripe? 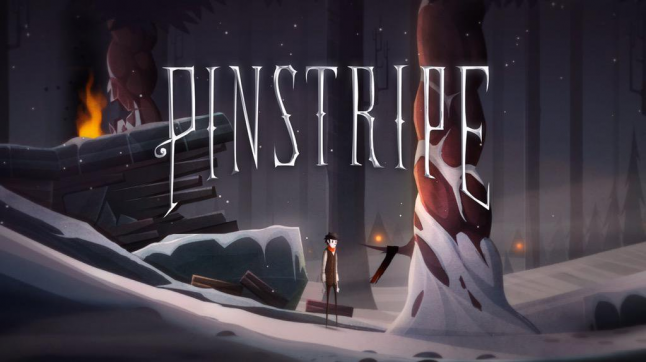 What is it about?

Pinstripe is about an ex-minister named Teddy and his 3-year-old daughter Bo. After a bizarre train-wreck in a beautiful snowy world, Teddy slowly discovers that he is in Hell, and that his daughter has been kidnapped by an entity claiming to be God.

Have you really done everything by yourself? Frankly, this not only only a very beautiful game, but also a meticulously designed one too and a truly ambitious indie project.

I appreciate that! Yes, everything has been done by me, including music, illustration, design, development, and marketing. It's been an extremely painstaking and challenging process, and I'm not sure I would ever do it again. But I'm hopeful that the cohesiveness and personality shine through in the game as a result.

How long did it take you?

Pinstripe is just about done, and has been in development for almost 4 years. I have a full-time job, so I made sure to schedule 3 hours each day to work on Pinstripe: 1 hour in the early morning, 1 hour through my lunch break, and 1-2 hours in the evening while I'm hanging out with my wife and family. 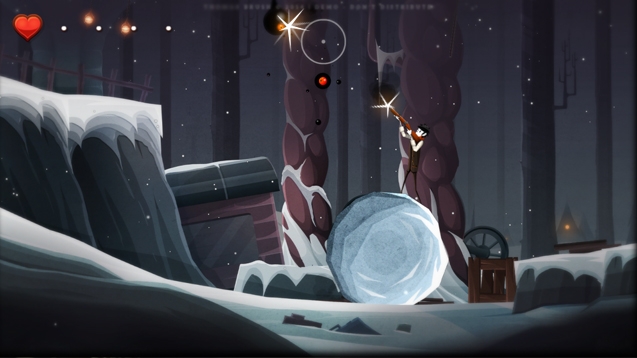 And how on earth did you manage to do all this on your own?

I'm obsessive about pretty much everything involving art. Sometimes I don't really know what I want to do with my life, so some weeks I'll spend hours just writing and recording music, while other weeks I'll become enamored with various illustrators I follow on Instagram, and try to replicate their style. As a result, I feel I have been blessed to grow into a well-rounded artist and developer. Additionally, I have the support of a great family. My brother is a software developer and talented artist, so he's shown me the ins and outs of JavaScript and photoshop illustration, while my other brothers have taught and inspired me in much of what I know about writing music. Finally, my father and mother taught me that humility and learning were pretty much require for any successful career, so I've made sure to listen and learn as often as possible in regard to the indie gaming community. I'm hopeful the skills that I have learned are shown in Pinstripe, and can inspire others to pursue their passions and never take no for an answer.

Could you describe your design process?

Sure! Here we go. But first, I must say my process is terrible, and I don't recommend it. The next project I do will probably be more concise and strategic because Pinstripe's process was an absolute pain. The process starts on the artistic side, and then ends up in development and just plowing through to get things done. Currently I'm in the finalizing and development side of Pinstripe, and it sucks. But here's the entire process:

Before I start a project, I make sure I feel something, and I make sure I feel it strongly. If I don't feel anything for the project initially, it's most likely going to be a long road to nothing. In the case of Pinstripe, I felt very passionately about the afterlife, and also the idea of losing loved ones. A couple years into development my passions began to shift, but fortunately the artistic side of the project was pretty much finished by then.

Once I feel something, I make a couple scenes that are fully fleshed out and playable, and I also set up the character's design and movement. This is all done with Photoshop and Unity, and is ultimately done just to give me some relief in knowing that the project I am working on has potential. I then add some sound effects and stand-in music just to be safe. In the case of Pinstripe, I believe I added some Chopin in the background to get a feel for it.

After this, I'll write a couple songs. Sometimes the songs are written on the piano and are transcribed into GarageBand or Logic Pro. But sometimes I'll just play around with Logic and see what comes out of it. Writing music can be the most frustrating part of game development because it has to match the game's look and feel. Even if the song is awesome, if it doesn't match with the level, it's useless.

After some small levels are designed and the music is added, I write out the story, and follow through.

Staying emotionally invested in the game is key. I read a lot of books about pursuing passions, sticking with plans, and visualizing end goals. Without these motivations, I would have given up. Therefore, this is the most important part of the process. 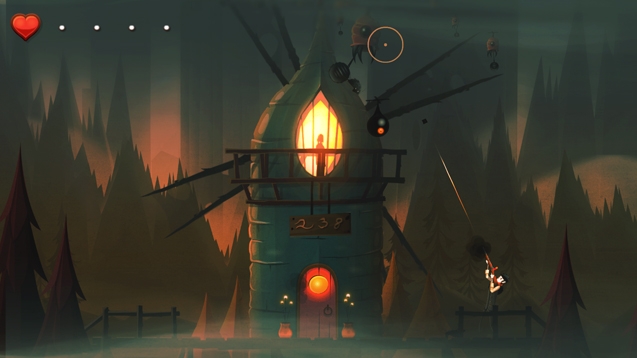 Which tools did you use to create Pinstripe?

I'm unashamed to say it: Flash. I was basically raised with Flash, so I use it to do basic vector illustration.

I then import those vectors into Photoshop to texturize and paint.

Once various Photoshop layers are completed, I import them into Unity. Unity is my favorite piece of software ever. It is super easy to use, and can target pretty much any platform.

I then write code in UnityScript in MonoDevelop.

Music is written on a weighted-key keyboard that is recorded through and an audio box. The audio box sends the data to Logic Pro, and I change the sound and instrument to whatever I feel the level warrants. In the case of Edge Wood, the first level of the game, a simple harp, piano, and horn made the most sense.

What were your influences?

I love the paintings of Esao Andrews and Eyvind Earle. They are very different painters stylistically, but I think both artist's styles influenced Pinstripe significantly. From a musical perspective, I found inspiration by Thomas Newman, James Newton Howard, and Chopin. All of these musicians have a way of pouring emotion out of their music. My dream is to somehow replicate that outpouring in some way.

Are you happy with the way the game has evolved so far?

Sometimes. If I'm not thinking about success and money (which I know I should never focus on), I'm happy with the game. But if I spend too much time daydreaming about a big house and full-time indie gamer lifestyle, then suddenly I feel like Pinstripe sucks, and I need to change stuff. So I try to not focus on its success, and pretend it doesn't matter how the game does.

How did you balance storytelling, action and puzzles?

Not sure if I have. I've had people tell me those things are very much out-of-balance, and sometimes I agree. If I did balance those things, I'd say it was luck, because my emotions dictated the game's direction, and my emotions are often always out-of-whack.

When should we expect Pinstripe to be launched?