The Rise and Fall of Rise of Legends

Following up my last post's look at Rise of Nations. Rise of Legends is another interesting RTS game that while raising the bar, also was the nail in the coffin for Big Huge Games
Josh Bycer
Blogger
January 05, 2015

I've played a lot of video games in my time and have seen everything from niche successes, colossal winners and absolute failures. And from that list there are only a handful that if I could use magic powers I would give them a second shot to see the game be a success. And Rise of Legends is one of those games: A completely underrated title that was more interesting and innovative than Starcraft that failed due to issues within and beyond the developer's control.

A Spin off of History:

For those that didn't read my previous post on Rise of Nations, Big Huge Games founded by ex Firaxis employee Brian Reynolds struck a chord with RTS fans with the amazing Rise of Nations. A real time strategy game that took a lot of the mechanics and flow of turn based strategy games to create something entirely new.

While Rise of Nations was based on real world civilizations and growth, Rise of Legends went in a completely different direction. Taking place in a fantasy world where three different factions vied for control: The Vinci, the Alin and the Cuotl. And just like Starcraft each race was completely different in art style, unit design and strategies.

What's interesting about Rise of Legends is that the developers used their design model from Rise of Nations as a template for this. So the mechanics of territories, attrition and using research were the same. However the three races each twisted them to their own design providing more strategic options.

Research which was handled from the library in Rise of Nations was folded into the city designs. Each city could be upgraded with districts that represent different aspects of growth which in turn unlock new functionality or advantages. So there were essentially two upgrade paths: The more districts you put on a city and what kind of districts.

Another major change from Rise of Nations was the greater personality of the sides. Instead of having all the basic unit types and researches the same for each side, Rise of Legends when with completely unique units and researches for each.

The Alin could place summoning circles down on almost anywhere on the map that would act as unit spawns and the Vinci would be able to unlock machinery to help them. 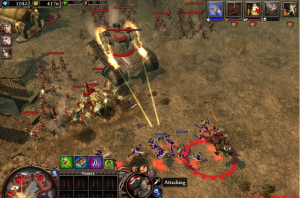 Keeping with the personalities, you also had hero units that appeared both in singleplayer and multiplayer. These units could level up, unlock new abilities and could lead your armies. This also added a level of micro management which I'll be coming back to in a minute.

The "Conquer the World" mode of Rise of Nations was replaced by a story campaign. Split into three acts and world maps, each act had different territories and Meta rules for the player to deal with. Certain maps had story elements to them and presented a special battle as opposed to the standard you vs. the AI.

The elements Rise of Legends took from Rise of Nations in the area of combining real and turn based design still worked.  And the unique factions stood out and gave the game a great aesthetic. But as a great shock to everybody, Rise of Legends was a complete and utter flop to the point where it became the death nail for Big Huge Games.

So how did a studio go from making one of the most celebrated strategy games of all time to one that put them out of business?

Rise of Nations was pretty much a real time take on the turn based strategy genre, something that was never seen before with a design that meshed perfectly with what Big Huge Games was aiming for. Rise of Legends however definitely had more real time elements to it which took away from the uniqueness of the design.

First was that cities could no longer be placed anywhere you wanted and had to be put at specific points on the map. This made maps more predictable and led to specific strategies and build orders to seep into the game. 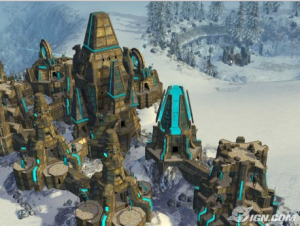 The designs of the different sides were really quite unique.

What I loved about Rise of Nations was how the developers fought against the rise of micro management in RTS titles but it seemed that micro play found a way into Rise of Legends.

Large units could trample smaller units preventing them from attacking and doing additional damage. Meaning that a quick player could keep moving a big unit and crush little ones and there was nothing the other player could do. The use of hero units also required you to focus more on rapid controls compared to Rise of Nations.

The three campaigns, while interesting took us back to the linear storytelling of other RTS games like Warcraft and Command and Conquer. And lastly the real killer that ruined Rise of Legends chance in the market was the multiplayer.

Not because the design didn't work but that the multiplayer functionality was broken. Gamespy's service didn't work and I and a lot of people could not play multiplayer other than 1v1 matches with friends. A broken multiplayer for a RTS game is a cardinal sin and the game was dead within two or three months and after one patch if I remember right. While Big Huge Games lasted long enough to work on an expansion to Age of Empires 3, they died soon after that.

I don't have any insider knowledge as to what happened with Rise of Legends and why the developers changed the design so much from what made Rise of Nations successful. Was it a lack of foresight, wanting to compete with other RTS games on the market or was Rise of Nations really just a lightning strikes moment for the studio? In the end Rise of Nations was a real time strategy game made from a turn based one, while Rise of Legends tried to follow the group too closely and got burned for it.

( For more posts on Game Design and the Industry along with weekly podcasts, check out Game-Wisdom)