The Ingredients for Developing a Digital Wargame

The first and most important step to create an interesting and playable digital wargame is to choose the right ingredients.
Vincenzo Pirrottina
Blogger
November 14, 2018

The first and most important step to create an interesting and playable wargame is to choose the right ingredients. It is not something related to computer performance, beautiful 3D graphical environments, deep historical details or thousands of units to command. When I think to a wargame masterpiece, played infinite times, I think to Risk, Axis&Allies, Stratego, Panzer Corps, Field of Glory and a lot of many other titles. All these games have in common a balanced mix of ingredients, low complexity but hard to master, high level of player involvement and challenge, difficulty and simplicity at the same time, historical accuracy but only as needed to create a realistic war strategic experience. 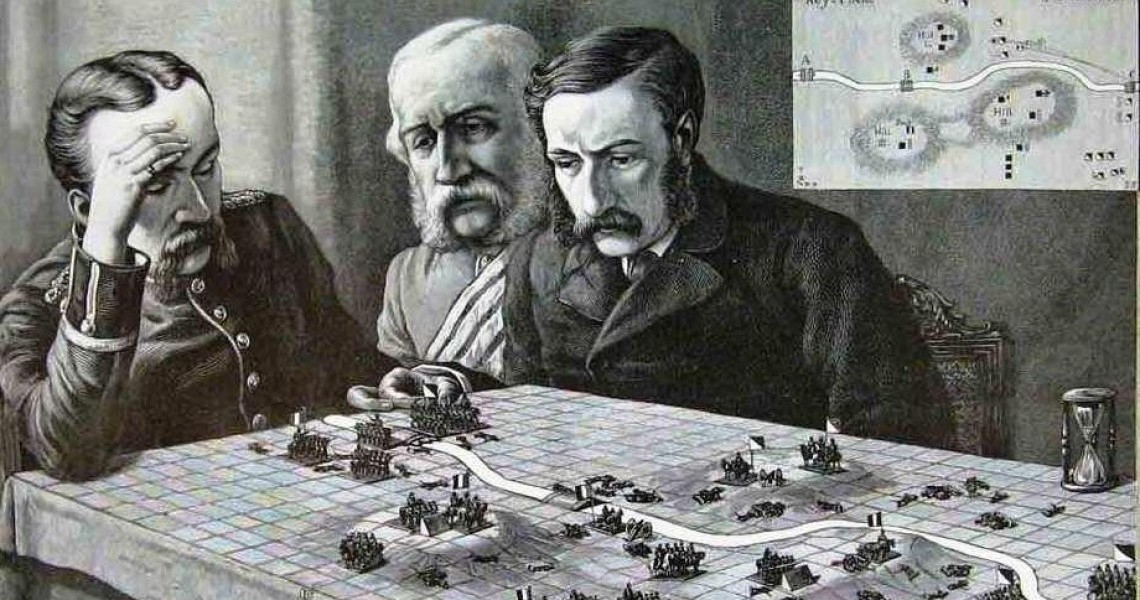 Turn based or Realtime play

The time is a dimension of a wargame that can be handled in two opposite ways: turn-based or realtime. All the classical wargames are turn-based, but RTS titles (Real Time Strategy) are growing also thanks to an increased computing power. Age of Empires, an old microsoft realtime wargame, playable in a single player\network multiplayer mode on desktop computer showed the big potentiality of the fast thinking\acting\respond game scheme (see also Dune2, Command & Conquer, Cossacks and others). A famous example of mobile RTS is Clash of Clans, imitated by many games in its mechanic, has created a new kind of mobile RTS game based on town building, resources gaining and home attack\defend from other players. A different mixed approach has been adopted by Total War Serie, using a turn based strategic map and a real-time battle field. Turn based is fascinating because gives space to strategy, military tactics and human reasoning, sometimes slow to learn but also very deep, on the other side realtime wargames are more indicated for younger game players, with fast reaction time and looking for immediate fun in a game. Typically these two different game approaches need different control peripherals, mouse or touch screen for the first one, a jopad or keyboard for the second. 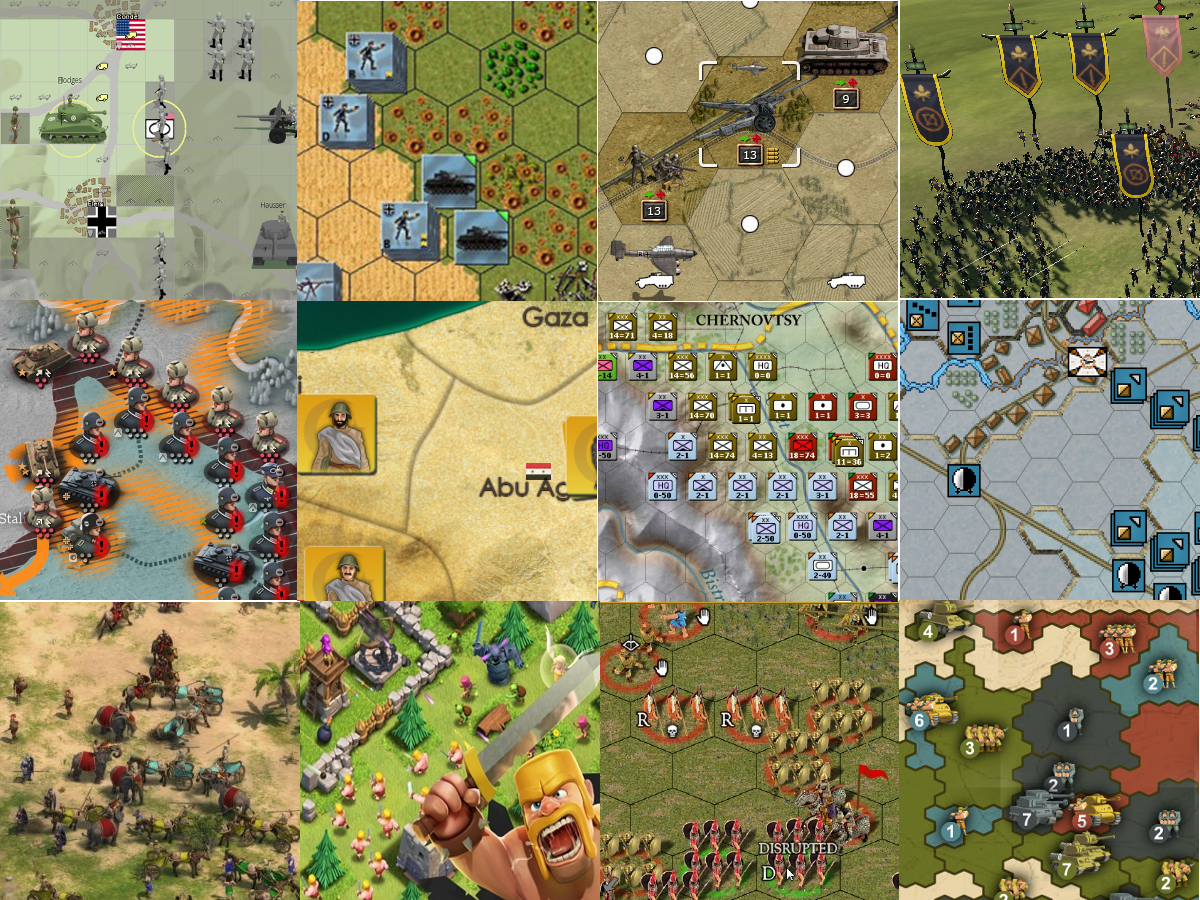 To design a good turn-based wargame, an appropriate board type must be chosen. There are three main different game board types: Hex based, Square Grid and Map Area based. Each has a specific logic for unit movements and distance measure along the board:

A single unit could represent a soldier, a company, a battalion, a division or an entire army. It is not important how many elements are grouped in one logical entity, the player has to quickly frame the essential characteristics of each unit and must be able to have a complete overview of the battlefield. This means, above all for turn based games, that a unit has to be drawn on the map in a simple and extreme clear way, more similar to stylized chess pieces or NATO APP-6 militar symbols, without excessive animations, excessive graphic details or indicators. The minimalist design promotes the concentration and the strategic approach of a good wargame player.

In general each unit can cross from his actual cell to an adjacent one, some decisions must be taken in particular about the destination location. Sometimes it must be free from other units, in some other case the movement is allowed also if there is a friend unit grouping multiple units in the same cell. Often the presence of the enemy in the target cell means automatic fight engagement. Designing possible movements for an unit, we must take in consideration also velocity, it can be considered as a number of sequential moves in the same turn for a turn based wargame, or how many pixels for seconds can be moved in a realtime game. Movement could also be influenced by terrain type (water, bridges, mountains) consequently path planning is an important strategic element in a wargame (owning a mountain pass, a city or a bridge).

The logic to attack and damage an enemy unit is usually based on these main parameters: the attack\defend strength and the attack range, moreover they could be influenced by unit, weapon and terrain type. Attack strength could depends also from the specific attacker-defender couple (cavalry vs archers, cavalry vs pikemen) and from the presence of other support units (artillery). Defend capability is often a way to reduce attack impact, often related to unit orientation it is maximum in front of the unit and minimum in a flank or back attack. The inflicted damage is in some games deterministic, it is mathematically calculated according to attacker and defender characteristics, in some other case could be also randomic (dice throw) considered funnier by some players and less predictable. The fire range introduces a strategic element, tanks with more extended fire range have an advantage, but also a third dimension in the map considering firing from an hill or an archer from a tower. Fire range and its logic, makes the game more interesting, player is not focused only to crash its army against the enemy but has to conquer some appetible position to take some benefit.

This is the secret ingredient for having an impact on the longevity of the game and that could do the difference. A nice, clear and minimalistic game graphic stimulates the player to try and play the game, well designed mechanics and intuitive rules can put him at ease, but only a clever\realistic opponent can give satisfaction and can burn the passion for a wargame. IA has to be designed at single unit and also at player level, each has to face different type of problems. Unit AI decides about path planning or attack\defend logic and tactic or to do its part in team work to accomplish some result. On the contrary player AI has to decide the strategic place to conquer or to defend on the map, has to decide how to use and distribute its resources, has to issue high level commands to group of units. In both case a good AI must take in consideration also the actual state before taking some decision, a wounded unit must consider to retire, on the other level a player must consider to take a defensive configuration in case of inferiority or temporary difficulty. 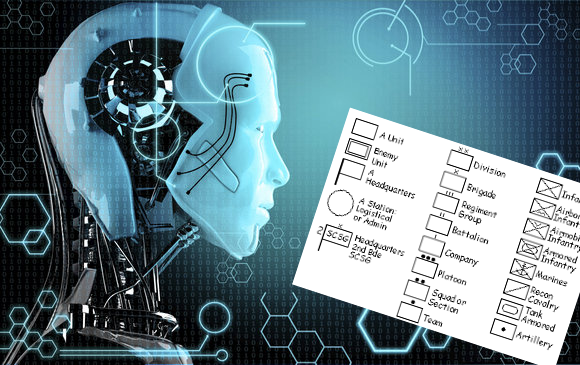 Particularly important in wargames settled during the two world wars (or in the desert), supply management is another important strategic element. Let’s think to fuel for tanks during German invasion of Europe or water for crusaders moving army in the desert. The supply is usually handled using a graph on the map, with supply sources and consumers (the units). If the path to all supplies sources is interrupted by the enemy, Attack\Defend\Movement capabilities are all affected.

The Fog of War is a way to simulate asymmetric knowledge of players about map conformation (for ancient time settled wargames) and enemy unit positions. It is usually implemented covering with a gray fog all cells that are not in range or already visited by one friend unit.

Each game must clearly state what are the rules for winning or losing. Many games consider only the “destroy every enemy units” condition, it is too basic and primitive. It is more challenging to define some strategic location to conquer, sometimes fixing the time limit to achieve the result.

I am an italian software engineer, interested in wargames and strategy games.