The Importance of Research: Getting the Best of Postmodern Design

In this post, I discuss how gaming has been seen as having very postmodern ideas of design and how that can be controlled with good research and the ability to find new ways of accomplishing gaming goals.
Christopher Totten
Blogger
July 26, 2010

First of all, let me apologize to all of you who read my blog for not posting on my usual two-week interval.  Lots of big July events and my work for the game I am creating with my students seems to have gotten the best of me over the last few weeks.  I am back though, and am ready with a new post!

I’ve often told students that one of the reasons I find game development to be one of the most exciting fields of design is that in order to create a great game about a subject, the game designer is forced to become an expert on that subject.

This is a somewhat unique aspect of game design; one that, along with other things, it shares with fields like Architecture.  This is also one of the things that cause game design to be locked into a postmodernist mindset.  I am speaking of course of postmodernism when it relates to design, much in the same way it functions in Architecture:  a reaction to modernist functionalism by the reintroduction and allusion to various past styles to create an eclectic final product.

In my discussions with other game writers, students, and designers since I have begun this blog I have noticed an underlying trend of disappointment in the fact that many games are designed with this postmodernist mindset.  Games, particularly in their artistic representation, (though it does in their functional/mechanical aspects) make many various and sundry allusions to past gameplay styles,artists, and cultures.  This type of design is the reason that the adage, “there are no new ideas, only old ones reshuffled” continues to be heard around many schools and offices.


It is for this reason that many observers of the game industry describe us to be in a creative “rut.”  In many of his videos, game design lecturer Daniel Floyd describes the three major genres of game story as, “sci-fi, fantasy, and World War II”, and he’s right.  Many of the stories being told by games are simply rehashings or sequels to things that have come before, and many of the mechanics have stayed the same for years.

Game designers who are against this would argue for a more phenomenological (as it pertains to design fields) approach:  putting aside all priory knowledge to create a unique design that is examined only against itself.  If taken to an extreme these games may only be created with mechanics, featuring little to no artwork at all.

In other worlds, game design functionalism.  Truly, if we are in the midst of postmodern game design, the days of Atari and early 8-bit games were our period of Modernism since there simply wasn’t the capability to surround ourselves with some of the graphical allusions we do today.  Reverting to this type of approach with modern graphics power, however, would be extremely risky.

Gaming, aside from being an exciting expressive medium, is also a business and it is for that reason that many of the games put out are cut from the familiar moneymaking cloth of those three familiar thematic genres and canned mechanics, but the time has come to take some risks.

Luckily, these risks arebeing taken by large studios with projects like Portal, Heavy Rain, the Katamari series and the games of Team Ico, as well as by smaller independent studios with projects like Braid, World of Goo, Flower, Facade, and the recent Limbo.  Games like these are blazing new paths for interactive storytelling and mechanics that were previously unthought of.

“But Chris…” you may be about to say, “these games are LOADED with allusions to past works of art or typical game mechanics!”  You are notmistaken.  In fact, it is the use of these mechanics that makes a sort of post-postmodernist game design possible.

Let’s take one of myfavorite examples:  Braid.  Braid begins by telling you it is a story of a man who wants to save a princess.  The player character, Tim, runs and jumps through colorful worlds, stomping on small brown enemies that walk sideways at him to reach castles.  Any gamer worth who hasn’t spent the last twenty-five years under a rock will tell you that this is the basic premise of Super Mario Bros., and that’s what makes the design so compelling.

Jonathan Blow is purposefully calling out the seminal game to point out many of the trends he sees in the gaming industry. By establishing postmodernist connections to what has come before, Blowhas given himself a foundation upon which to build brand new mechanics.  In Braid, the player ends by not only NOT saving the Princess, but also questioningwhether the Princess wanted to be saved at all, or if they had actually beenplaying the villain.

"The Princess is in another castle" in Braid

Likewise, the game recreates specific zones from its influences.  It is in these levels, the one resembling the first screen of the original arcade Donkey Kong coming to mind, that the player is compelled to play the game as they have been conditioned to by their past experiences, only to fail miserably when the time-based mechanics of the game thwart them.

My point is that Blow clearly did his homework when making these allusions.  Not only that, he clearly playtested some of these sequences in his game to stop the player’s progress at very exact moments, sometimes in unavoidable ways if the player used the methods they learned playing other games. 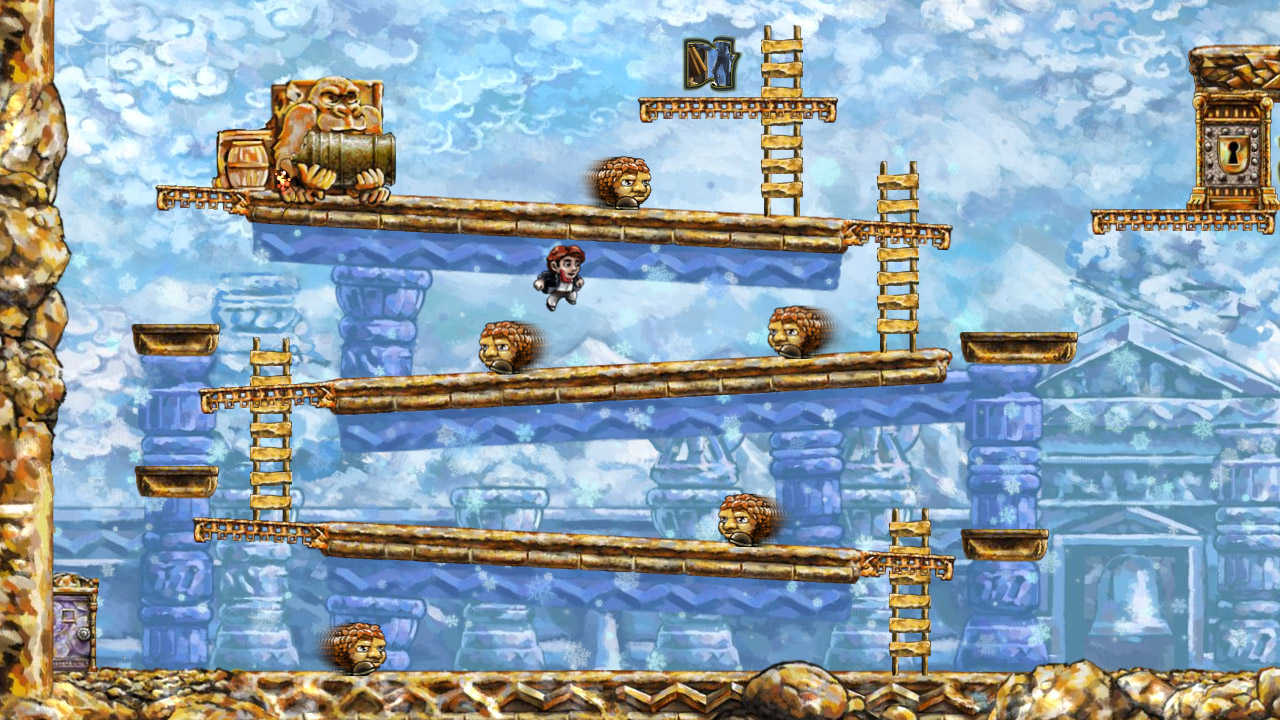 One of the best things about modern gaming is how expressive it has become since its infancy.  We can express ideas through interactive rules and give them narrative context through the artistic side of game development.

Despite their postmodern design tendencies, games like Braid, Limbo, and Portal take what we have learned from past games, present them tothe player in ways they are familiar with, then create conditions by which the player cannot accomplish the same tasks in the same old ways.  In many ways, these games are deconstructivist (still itself a form of postmodernism) in the same way Watchmen was to comic books in the eighties; they take familiar imagery and turn it onits head as a way to analyze the medium.

But, is referring to gaming’s history and breaking it apart the only way to move forward?  I would say “no”to this in the same way that I would say “no” to the idea that we need to takeon a reference-free functionalist design methodology to give the field forward momentum.

An alternative way of overcoming some of the pitfalls of gaming’s postmodern mindset is ironically to take it further.  I’m not saying that we stick even more fanatically to sci-fi, fantasy, WWII, and canned mechanics, but instead better understand the things we are alluding to.

Watching many of the trailers for some of the games at E3, one got the impression that many of the things added to some games were added for their“hey wouldn’t it be cool if” factor. Don’t get me wrong…I love that factor.  It can have a great effect on a player.  When that is the only reason that something is added to a design, it can create a pretty shallow experience.

In my last post, I discussed how mechanics and narrative elements of a game should be constantly scrutinized against one another to create more “Meaningful Play” between the two.  In the same way, a deep understanding of both gaming’s past and mechanics that have been done, as well as the topicsyou choose to depict in your game, can help a designer’s ability to create moremeaningful designs.

Practicing these methods can only make someone a better and more thoughtful designer.  By doing these things, design decisions (and I emphasize that name for them because they should be thoughtfully made decisions) can havemore reasons to exist than typical impulse.

Sure, we’re still referencing, but we’re giving those references the powerful backing of real research that can help us create new mechanics and ideas for games. With the right knowledge, backing, and well thought out mechanics, any activity can be designed into a fun game.

With research based methodologies, deconstructivist ideas, and some ofthe functionalist game ideas floating around on the web, the future of game design could get interesting.  It has been said that anything can be made into a fun game if the rules of the activity are expressed correctly in the game.  With enough knowledge of your topic, you can open up whole new gaming possibilities.