The flow applied to game design

In this post, I will explain what is the flow theory and how can we applied it while designing a video game.
Daniel Berube
Blogger
March 20, 2019

In the 1970s a psychologist named Mihaly Csikszentmihalyi experimentally evaluated the flow. He found's that a person's skill and the difficulty of a task interact with a result of cognitive and emotional states.

In resume, Csikszentmihalyi looks at what makes us find pleasure and lasting satisfaction in activities.

The flow is a mental state of operation in which the person is fully immersed in what he or she is doing. It is a state and a feeling of energized focus, full involvement, and success in the process of an activity.

In game design, the flow is an important factor to take in consideration if you want to create player engagement. Here is the list of elements that can influence and affect the flows in video games.

Rewards: Intrinsically rewards are constantly obtained by the player as real and instant rewards.

Clear goals: The players have clear goals and know what to achieves. There's is no question about it and this element is important to be clear for the entire player progression through the game.

Loss of consciousness: The flow works well in video games when the player doesn't have to concentrate on what he's doing to achieve an action. This is the state for the player is the merging of action and awareness.

Loss sense of time: The player is hooked by the activities that he's doing and doesn't realize that the time flies while doing it.

Direct and immediate feedback: The player is guided by the feedback of the game and know what and how much to succeed.

The balance between player skills and challenge: The challenge of the activity is neither too easy or too difficult. The challenge is constantly adapted to the player's skill. Even if this seems to be obvious, this is where most of the game failed and I will explain why later.

The player controls the situation and the activity: The player feels that he can successfully beat the challenge. The objective for him seems reachable. ï»¿

PINBALL IS A GREAT EXAMPLE OF FLOW

PINBALL, (I know, I'm old) is a great example of flow. I am a huge fan of pinball. It is one of my ex-colleague that give me that example and I have to agree with him. all the elements needed to create the flow state of mind to the player is in the design of a pinball. Let.s take a look at the video and try to identify the elements listed above in the video sequence.

All the elements are in place to create the flow and give pleasure to the player. Is it the same for your game?

PUT THE PLAYER IN THE "ZONE"

As a game developer, your goal is to master the elements and feature that you have in your hands to create the player flow state of mind. If you succeed to put your players in the "zone" you will gain; More engage players, you will retain them and out of it, you will obtain a better monetization from them.

At the end of the day, having a strong flow can make the player perceive your game as a better quality game than it is in reality.


You should consider that each design decision may impact your game potential to put and keep the player in the flow.

There are 2 types of flow to applied in your game design; The microflow and the macroflow.

The microflow is emotionally intense. It is an experience that lasts for a short period of time but can repeat over time. If your gameplay loop doesn't contain microflow element, there's a big chance that your game will fail to get engage users.

The macroflow is a progression of the challenge that adapted to the player's skills. It is also known and related to the difficulty curve.

The macroflow is equal to the duration of the entire game. For Free to play game or GAAS, where you aimed to retain players for years and not hours, the macroflow can be equal to the player long term goal or objectives.

The microflow can be defined as an intense and focus state of mind where the player feels the enjoyment and fulfillment, this is often generated by a series of successful achievements.

HOW TO BUILD THE MICROFLOW

There are 3 important means that you can integrate into your game design to help you create the microflow for your game.

The gameplay rhythm and the player inputs are related to a temp and a rhythmic pattern.

Unconsciously, you will help the player to get naturally into a sequence and mood of inputs. You will create a pattern that will be recorded by the player brains and make him feel good and even better than it supposed to. This trick can even start dopamine secretion in player brains.

As the video below shows, some games are directly designed based on the rhythmic pattern input.

Another mechanic type that you should consider for creating the microflow is creating the virtuous effect. You game should have or add gameplay mechanic that will encourage and promote the player series of success.

This mechanic will help the player to be and to stay in the microflow. As long as the player succeeds and stays in the flow, the challenge will become easier and stays easier.

In guitar hero, the tolerance of the input increase as the player gets a series of success. This helps the player to be maintained in the flow and keep him engaged. He got the perception that he is better than expected and this hook him to keep playing.

Schematic of the virtuous circle effect in video games

In resume, to create the virtuous circle effect, your game system must have gameplay mechanics that increase the tolerance parameter define by the game to help maintain the player in the microflow.

In BURNOUT PARADISE, the player is in the micro flow chaining success, the games give him positive feedbacks to do so through UI and sounds. The game system gives to the player bonuses to keep doing the action of avoiding collisions helping the player to stay in the microflow.

These feedbacks are an intrinsic and positive reinforcement to keep the player engaged.

The goal of the macro flow is to maintain the player in the zone between anxiety and boredom. For a game designer point of view, it means managing;

Those are all elements that are needed to help maintain the player in the macroflow.

If the player skills are too high for the challenge, the player may risk falling in a boredom state of mind meaning that the game won't satisfy is needs and they is a big chance that this user will churn and stop playing the game.

On the other hand, if the game is too hard, the player may risk falling in an anxiety state of mind meaning and may also churn because he felt that the challenge is too hard for him.

BEWARE OF THE "PLAYTEST EFFECT"

The real problem is that most of the time, by listening to much the playtest result, we deliberately decrease the challenge believing that this will make the game more accessible to more players. 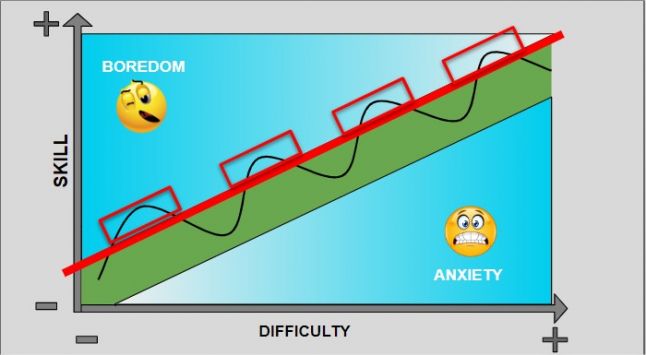 In fact, what we are doing here is that we are increasing the potential boredom zone in our game. We deliberately create a boring game experience to more user believing that our flow zone will be bigger for more players but in fact, we don't retain user because the game is not enough challenging for some of them.

I am not saying that everybody does the same mistake, I am just saying that lowering the challenge is not the best solution to apply to your game. In fact, this is exactly where dynamic game design become the most powerful tool that you can have in your pocket to prevent that to happen. This will be a great upcoming article.