The delicate balance of action and stealth in Hood: Outlaws & Legends, a unique PvPvE game

The “PvP” and “PvE” monikers frequently float around to define whether players duke it out in head-to-head to battles, or venture into more relaxed encounters against monsters or other designed challenges. Rarely we see those combined in a “player-vs-player-vs-environment” descriptor. While some genres such as battle royales do mix both, the May 2021 newcomer from Sumo Digital, Hood: Outlaws & Legends, revolves around an intricate balance effort involving both.

Using medieval folklore tales of Robin Hood and his squad as a backdrop, Hood: Outlaws & Legends pits two squads of four against each other in a competitive heist. Maps feature stone castles and ruins, small villages and pathways, providing opportunity to stealthily steal a key from the Sheriff of Nottingham. With the key in hand, the team can unlock a vault with a treasure; successfully escorting the heavy chest showers the winning team with gold coins.

“The pillars were that of a tactical stealth action game,” Andrew Willans, Game Director for Hood at the UK-based Sumo Digital. “Speaking to the fact that some good strategy would help you pull off the perfect heist, stealth because we wanted it to be an important part of the game, and action because we wanted to appeal to a wide range of players.”

Willans said that one of the biggest challenges was finding the right balance between action and stealth. Two of the four characters, Robin and Marianne, favor a more subtle approach. Robin, a proficient scout with a bow, can snipe guards from afar, while Marianne dons an assassin approach (though any character can instantly kill an unsuspecting foe). John, on the other hand, is a tanky brawler who can charge at his foes and lift portcullis gates whenever a section lockdown occurs. Finally, Tooke the Mystic offers some team utility with much-needed healing (something to keep the group together, since there are no other ways to heal). 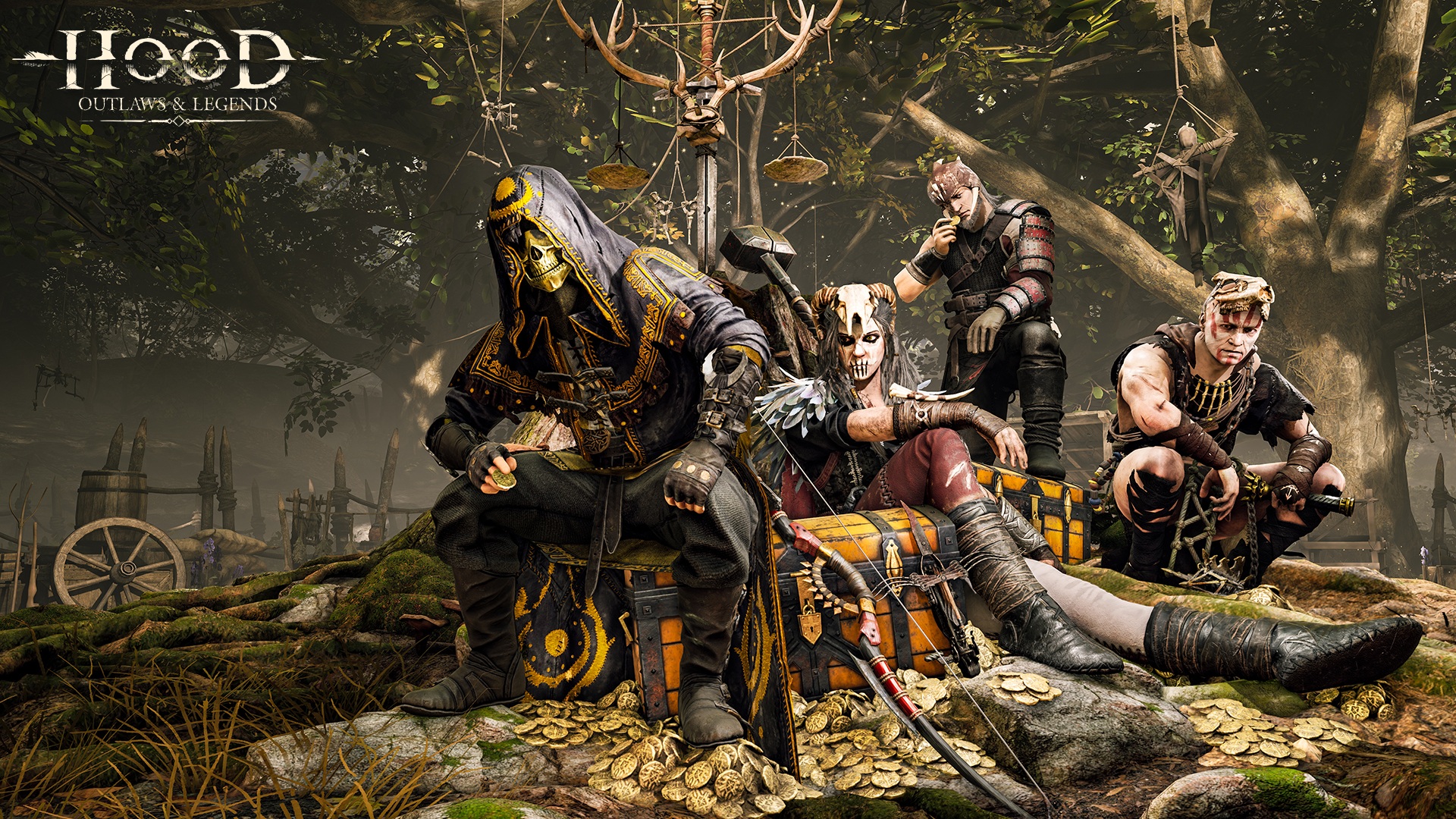 “A single player stealth game is really hard to do, and multiplayer stealth even harder, because anyone can trip the alarm,” Willans said. “It could be your co-op partner that does it, and they’re responsible for the cause and effect of escalation and what happens with the felony system. Then we have another team of Outlaws doing exactly the same thing. So the challenge is multiplied by eight.”

After assembling the Outlaws, Sumo Digital began working on iterating the PvE elements. Guards stalked the courtyard, one of them carrying the precious key for the vault, but that design evolved.

“What’s fun about stalking 30 guards in a courtyard?” Willans said, laughing. “And that prompted conversations about what if this AI was bigger, more present, more of a threat.”

The Sheriff of Nottingham entered the fray as a Resident Evil-inspired Nemesis, unstoppable if only for a moment with certain abilities; standing in the range of his grip results in grisly deaths of player characters, enhancing the “cause and effect” of misplaying the stealth aspects.

While the developers want players to approach heists in their preferred manner, they include some “best practice” elements, by introducing stealthy and efficient assassinations and lots of bushes as hiding spots. On the other hand, the punishment for alarming guards, other than their aggression, is a red glow surrounding the offending character, visible to players from the other team as well.

“Good players would always outsmart the AI, no matter what we threw at them,” said Antonio Stipanovic, senior programmer. “But now with the PvP element, they suddenly have to worry about the other team. Introducing this did make the players fear this penalty more.”

With stamina-based combat designed to rein in fans of popular action titles, Sea of Thieves also inspired the developers when it came to stealing the chest, adding a certain element of “physicality” to it, Willans said. Only one player can lug the chest (with burly John being able to carry it the fastest). The teammates escort the carrier toward one of three available winching spots, and then act on the device to carry over the chest. A progress bar fills up, awarding gold for every notch, but at any time the other team can intercept this; whoever finishes the job gets declared the actual winner of the match, showing a “Defeat” screen even if the first team garnered more gold.

“The irony about people feeling robbed in a game about robbing was never lost on me,” Willans said. “Some people have told us, ‘why does it matter for me to get the key or the chest?’ So we put in rewards like an XP boost and gold. While carrying the chest, your ultimate ability charges faster. But we wanted those clutch steals and clutch saves. We wanted the team that was losing to never give up.”

“It didn’t matter how much we rewarded them in the metagame, with experience or gold,” Stipanovic added. “What they really cared about in the end was that victory or defeat screen, they cared about that much, much more.”

The design for the winching is pivoting with the Season 1 changes that rolled out today. Each team now has a separate progress bar, allowing them to fulfill the heist in a more independent, yet still competitive manner, striking a happy middle, Willans said. The balance in the reward system is very delicate because pushing it too much in one direction could make players omit the stealth and run to objectives, for instance.

As for lessons garnered from developing Hood: Outlaws & Legends, Willans emphasizes two things: “test wide, early, and often” and that Early Access would have been likely beneficial for the title. He believes the current iteration of the game could be dubbed as such, while the Season 1 version would be the proper launch version.

“If you put it in Early Access, some of those negative comments don’t hurt quite as much because people feel they’re part of the journey,” he said. “I also think it gets the feedback in quickly, using things like the Steam Beta Channel.”

Sumo Digital released many patches since the May 2021 release, iterating particularly on quality of life changes and assassinations from Marianne, who was widely considered too powerful. Stipanovic said that one of the better ways they found to balance was through match-ups; seeing what kind of situation one character faces another and who should be advantageous in it. For instance, the nimble assassin could even win against Robin with a lucky headshot from her crossbow, so they introduced a damage fall-off over distance to the bolts.

When it comes to gathering feedback, the developers use a mix of qualitative feedback from their Discord threads, Reddit, YouTube, Twitch, and other social media, with some number crunching.

“For me, numbers are just a tiny piece of a puzzle. Numbers are great, they give you an early warning if something is massively out, but it’s not perfect.” Willans said. “The telemetry is good, but a lot of the stuff I’ll get from playing the game myself. Likewise, if you sit in forums and Discord, you tend to hear the loudest voices, which aren’t always the correct ones.”

“Using the data can be useful but also dangerous based on how you interpret it,” said Stipanovic. “Does it answer the correct question? It could be misleading.

Willans likes to keep the comments in mind while playing himself to see them firsthand. Every once in a while, the developers encounter surprisingly helpful feedback; one example is a well-put-together video that they found on Reddit which nailed what made Marianne overpowered. Additionally, Willans himself engages in some field research by watching Twitch streamers and engaging with them while they play.

“When it comes to player feedback, it could be really useful,” said Stipanovic. “We made some changes to the flashbangs directly based on community feedback. Marianne was her own issue and players couldn’t really agree on what makes her powerful, so we had to dig deeper.”

Internal feedback conflicted the players -- some felt Marianne wasn’t powerful enough. But the team found themselves outskilled by the player community, shocking Willans with how quickly they became adept at it. Players approached the skill ceiling quite quickly, which led to some issues, like the newcomer experience. That pushed the idea to create the just-released PvE mode, which removes the other team.

“It’s important to listen to everyone: veterans and beginners, players who praise, and players who criticize,” added Corentin Le Bris, the community manager for Hood. “In general, I would say that if players disagree between them, then it means the team is doing a very good job. And it’s mostly the case. If players have different experiences and different characters to praise or complain about, that’s great news for us.”

Lastly, resources can be a limiting factor; the 40-person studio is no longer devoting all their employees to the game now, but the team also has to push the changes on five gaming platforms: PC, PS5, PS4, Xbox One, and Xbox Series X. Nonetheless, the team pushed forward on some major changes for today's Season 1 launch.

As a final piece of advice, Willans said “strip back to the essentials. Don’t be afraid to throw mechanics if they don’t work! Our first design for the winch was a medieval conveyor belt.”