The "clicker genre" -- games whose sole mechanic is simply clicking something on screen and watching numbers go up or down has become a popular way to kill time among gamers thanks to hits like Cookie Clicker. I'm not alone in enjoying these games and examining why allows us to look at one of the key draws of a lot of video games.

The Clicker genre's main pull is a simple one: Progress. You're watching numbers go up while you're unlocking new things to make more numbers go up faster so that you can repeat the process over and over again.

And I bet that for those of you reading this who have never played a clicker game, you're wondering what the big deal is. Clicker games aren't about deep gameplay but about the hook of progression and how it compels us to keep going. It's the same pull that achievements have over us that I talked about in a previous post -- we don't like to leave tasks unfinished.

It's the purest example of the allure of the "power curve" or how RPG based games keep you interested by giving you more and more powerful items that let you kill enemies quicker.  You could boil down every ARPG from Diablo to Path of Exile's progression model into killing enemies for loot that lets you kill more enemies for more loot. While yes, you are gaining new abilities and gear that do change how you play, everything still comes down to numbers. 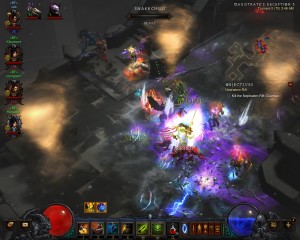 Deep down, Diablo 3's hook to keep you playing...

What's very interesting is how playing Diablo 3 at the same time that I was playing Clicker Heroes, the latter was more engaging than Diablo 3's end game.

And that's because it's pretty much Diablo 3 and every ARPG distilled down: No need to run around, no down time, just numbers going up so that you can make other numbers go down faster. And really, that's the basic hook of any game built around a progression model -- From epic quests of World of Warcraft down to simply building your farm in Farmville.

Another key point is the concept of scale or how the numbers of both your value and what you need to get progressively get higher. This makes the higher rewards harder to achieve and therefore more valuable while at the same time you can quickly do the earlier challenges or items as you are now above them. Again, this goes back to the lure of RPGs where enemies who were once too tough for you now crumble in front of you.

But with that said, while clicker games are great for the short term, they lack something that may surprise you that keeps them from attaining popularity in the long term.

As we've talked about, clicker games are really progression systems separate from the rest of what could be called an experience. But a progression system by itself doesn't offer much depth and you can see that after playing any clicker games. This is where the rest of the package comes in to keep you motivated and engaged and what Blizzard has spent millions on to develop.

When you play Diablo 3, it's not just about watching numbers go up and down. You have the art that showcases crazy battles, monster bodies flying all over the place, an avatar that grows progressively awesome looking and more. All these are ways for Blizzard to add a wrapper around the progression model so that you're not just watching numbers. And this goes for games like Farmville and other achievement based titles where the game constantly tempts you with new things and rewards to go after to keep you playing and hooked on that progression model. 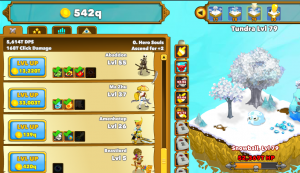 ... is the same as Clicker Heroes. Except I'm sure it cost far less to make than Diablo 3.

Better games like Diablo 3, Path of Exile and so on give the player choices as to how they can influence those numbers so that they are more engaged with what's going on.

Diablo 3 has set items, legendary gems, the different builds that allow you to actively affect the numbers, which is something that is lacking from most clicker games.

Another thing I should mention is that the clicker genre is the complete antithesis of skill based titles like action games or games that are more about choices rather than numbers like strategy titles. This could also explain why a lot of older gamers who grew up playing those two genres look down at and aren't enthralled by social games compared to newer gamers who are more used to abstraction.

A great example of having a progression model built into a skill based system would have to be the work that has gone into Call of Duty's multiplayer progression and how it's designed to reward you through play with abstracted bonuses. Unlike a RPG where everything is built around numbers, games like Call of Duty demand skills from the player and then reward them with more value for their character.

The clicker genre is far from being deemed complex, but it's very useful for designers to examine just how important a good progression model is to keeping players invested in something. If your game's progression model isn't as good as a clicker game, don't expect people to fall in love with it. Because again at the end of the day whether you are fighting monsters, terrorists, raid bosses or even baking cookies, it's all a numbers game.