The Care and Feeding of Interesting Logic Puzzles

As a expert puzzle constructor and top-10 finisher in the US Puzzle Championship, I show in detail how I constructed one of the early logic puzzles in my game RYB.
Paul Hlebowitsh
Blogger
September 19, 2016

In this blog post, I will go through in detail how I constructed one of the early puzzles in my logic puzzle game RYB.

Just for a bit of background: I was a top-10 finisher in the 2016 US Puzzle Championship. I've been constructing puzzles for about 10 years and RYB is my first game.

The puzzle we're going to look at in detail is this one: 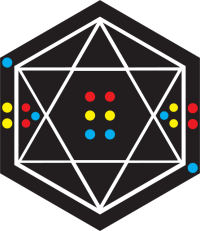 Before we go into its design, let me tell you about RYB's mechanics so you have an idea of the constraints we're working with.

RYB is very similar to "Minesweeper" or "Hexcells", but instead of using numbers or symbols, it uses colors. The colored dots inside of a shape tell you how the neighboring shapes are colored. For instance, consider the example puzzle below: 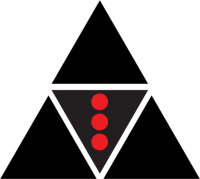 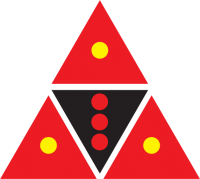 We have new information! Yellow dots have appeared. The three outer triangles each have one neighbor, namely the center piece, and each outer triangles has a yellow dot, so the middle piece must be colored yellow to satisfy all three of these clues. 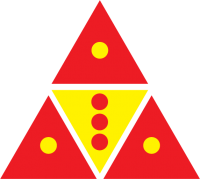 And we're done! Once you've colored all the shapes, the puzzle is complete.

In order to make an interesting puzzle from this mechanic, we need to have a shape which lends itself to a good puzzle. When I started to make the puzzle shown at the top of this post, I started with a central hexagon, because I wanted to play with many interacting shapes, perhaps broken into cycles of shapes that clue each other. At this point in the construction, I had little idea as to what exactly the puzzle would look like, I only knew that I wanted a hexagon at the center. I do all my puzzle design on paper with pencil, but for the purposes of this article I'll include vector art so you don't have to worry about my terrible drawing skills! 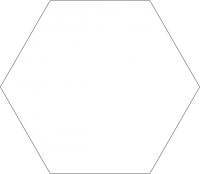 Pretty simple! Not much more you can do than that. After drawing the hexagon, I put some shapes around it. Triangles were the first ones that came to mind. 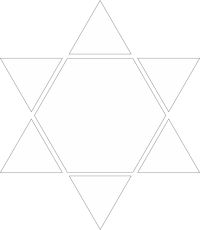 At this point in the construction, it was time to start playing around.

Puzzle construction is a conversation between designer and puzzle. In the course of designing a puzzle, the designer must listen to what the puzzle is trying to tell it. Even though we have no clues and only a few shapes, this puzzle is already saying a lot to us. Consider any two of the triangles, such as the ones circled in the picture below. 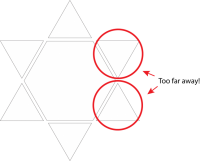 There are two options to fix this problem which stand out immediately.

I decided to go with option 2 for this particular puzzle. Later in the game, with different mechanics, I actually used option 1, and it looked like this: 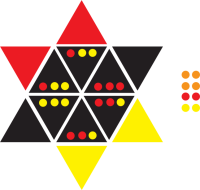 But I don't want to get too far off topic!

In this early puzzle, I pursued option 2.

Because I needed to add pieces, I added them in the obvious space, namely the negative space between every two triangles. 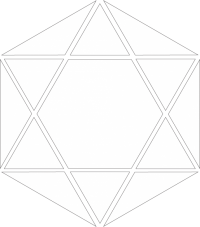 Adding these pieces gave me another constraint on the outer triangles. I played with this puzzle for a long time, trying to figure out how to make this shape into an interesting puzzle. However, it has an odd problem. Namely, the high degree of symmetry in the shapes makes it hard to make interesting logic that doesn't solve the puzzle all at once. The puzzle has many axes on which is looks the same, three of which I've marked in the picture below. It's hard to make the axes pictured separate without breaking the symmetry of the puzzle. 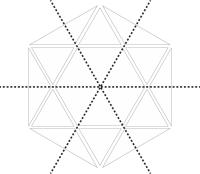 To solve this problem, I decided to try to constrain two pieces on either side of the puzzle. They're along one of the symmetry axes, so they could conceivably be symmetrically constrained. After playing with that idea for a while, I hit upon the idea of adding an outer hexagon so they had a piece in common, giving them a tighter constraint. 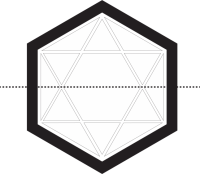 The main idea was only arrived at through very general reasoning, listening to what the puzzle was trying to tell us, and tweaking the shapes until something interesting presented itself. At this point, I decided that I wanted to constrain all the inner triangles, so I added clues that would constrain those pieces. 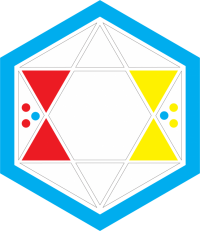 Now I had some more clues to play with! Any of those pieces that had their color revealed could be places where I could place new clues. When people solved this puzzle, this would be their first step. They would get the outer hexagon, the inner triangles, and then have more clues to work with.

Symmetry is important to puzzles. Current logic puzzle construction trends feature symmetry as a "beautiful construction". In this puzzle, I wanted the solver to use the same piece of logic again, as a sense of symmetry inside the actual solve structure. If you notice, we're in a similar position to before. There's a set of diagonally opposite clue spots that have one piece in common, only on the inside rather than the outside. 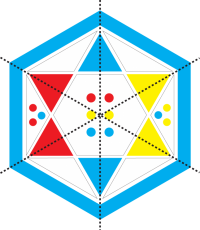 I added clues so that the same logic would happen again! This time, though, they would be coloring the inside hexagon. (To be clear, the clues on the colored pieces are revealed only after they are colored.) The puzzle looks like: 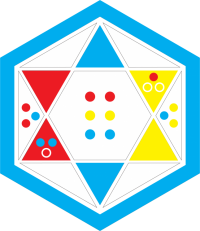 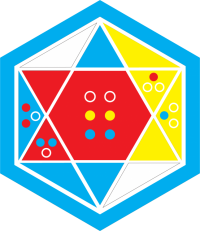 Finally, I had to constrain the last two shapes. So I added clues to the outer hexagon that would act similarly to the way the inner hexagon helped in the first clue set. 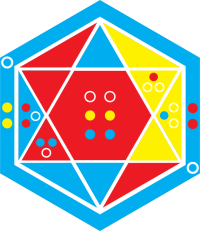 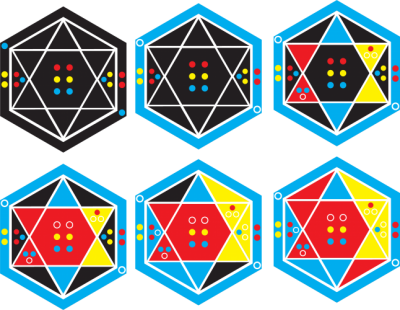 At this point I felt as though I had a good puzzle. It had an "aha" about the outer hexagon that was used in two different ways in the puzzle, while providing a few easy fill-ins in the intervening stages that would help build confidence of the solver.

I hope you enjoyed this in-depth look at logic puzzle construction!

If you enjoyed this write up, please consider supporting RYB on Steam Greenlight at https://steamcommunity.com/sharedfiles/filedetails/?id=745756756, or following me @FLEBpuzzles for more puzzle content.