Fallout 3 is an enormous game with much to write about. Tonight I discovered a little 'story' in the game that wasn't written at all. Or, rather, it's merely inferred by a series of interesting item placements.
David Hughes
Blogger
June 02, 2010
This is just a brief observation I wanted to get down while I was thinking about it. . . .


I've been playing a lot of Fallout 3 lately, but just tonight I noticed a couple really interesting details that really bring the world home to me. One (and for those of you who've played, it's at the raider outpost in Cliffside Caverns) was after fighting my way through a raider-infested series of caverns, only to discover these caverns abut a series of caves home to Yao Guai. On both sides of the door leading to the new set of caves there were frag mines placed.

This really humanized the rather faceless (and voiceless) antagonists of the Capital Wasteland. Yeah, raiders are a real pain-in-the-ass, but they're people too. And they sure as hell don't want to be eaten by the Yao Guai. 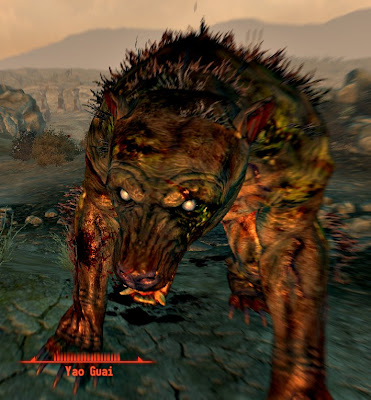 You want to be my lunch?
It's a small detail but one that kind of stuck with me.

Another similar moment came at the Warrington Trainyard. Here's an encounter with an area relatively infested with feral ghouls. But as you clear the area, there's a broken catwalk overlooking the yard with decayed skeletons piled around a bunch of ammo boxes and a missile launcher. People died fighting here--but no one ever tells you a story or puts it in a cut-scene. It's just there, for you to find, and make the inference. 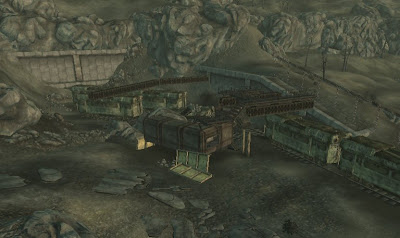 Not the greatest angle, but it gives some idea of the layout.

Further up a hill nearby is a pseudo-bunker with more remnants of the combatants--and a sniper rifle placed on the window-sill. It's a design decision, of course, but unlike a more typical FPS attitude, the sniper rifle isn't placed there for you to use against the ghouls. You've already killed them if you came from the anticipated direction. The rifle is there because someone died tried to provide 'overwatch' to those poor souls on the catwalk.

Amazing how well-crafted worlds sometimes don't even need words to tell their stories.