How we made a game with the purpose of teaching people about politics without being boring.
Alex Driml
Blogger
January 24, 2018

Games are an interesting platform to use for education. Games are wonderful at teaching concepts, but the nature of the medium makes teaching specific facts much more difficult. Take the Sid Meier's Civilization series for example; every play session is full of factually incorrect information, America didn’t go to war with Greece in 200 BC, and China had no involvement in the construction of Petra. However, the first time I played a Civilization game it opened my eyes to seeing history as more than just a series of events, but as a concept. The details aren’t perfect, but playing from the dawn of civilization to the near future gave me a new appreciation for the subject that I couldn’t have found outside of a game. Furthermore, it served as an excellent jumping off point for me to research topics further. If I found a particular civ, monument, or leader interesting, then I could go and research them outside of the game.

However there are problems with the series when viewed through this lens. The game frames human history as having overall winners and losers, which is a massive oversimplification. World powers come and go, in real life there is no winner. This is a problem that comes with Civilization being a game – games have winners and losers, even if the world doesn’t reflect that.

Trying to balance being a game and being educational can be difficult. You have to present your ideas in a way that is both informative but also engaging. You also have to ensure that you aren’t misrepresenting your subject matter while still keeping the game engaging.

In Gerrymander: Rig The Election we tried to balance the game aspects with the educational one. There are other games that have used game mechanics to teach the player about gerrymandering. However, they tend to focus on the details, the specific rules that govern electoral boundaries. We wanted to make something more approachable. It was our intention to make something broader, to cut right to the chase and let the player experience gerrymandering in the most pure form.

For those unaware, gerrymandering refers to the drawing of electoral boundaries in a way that favors one political party. Obviously, I recommend playing the game to see for yourself, but here’s a brief summary: 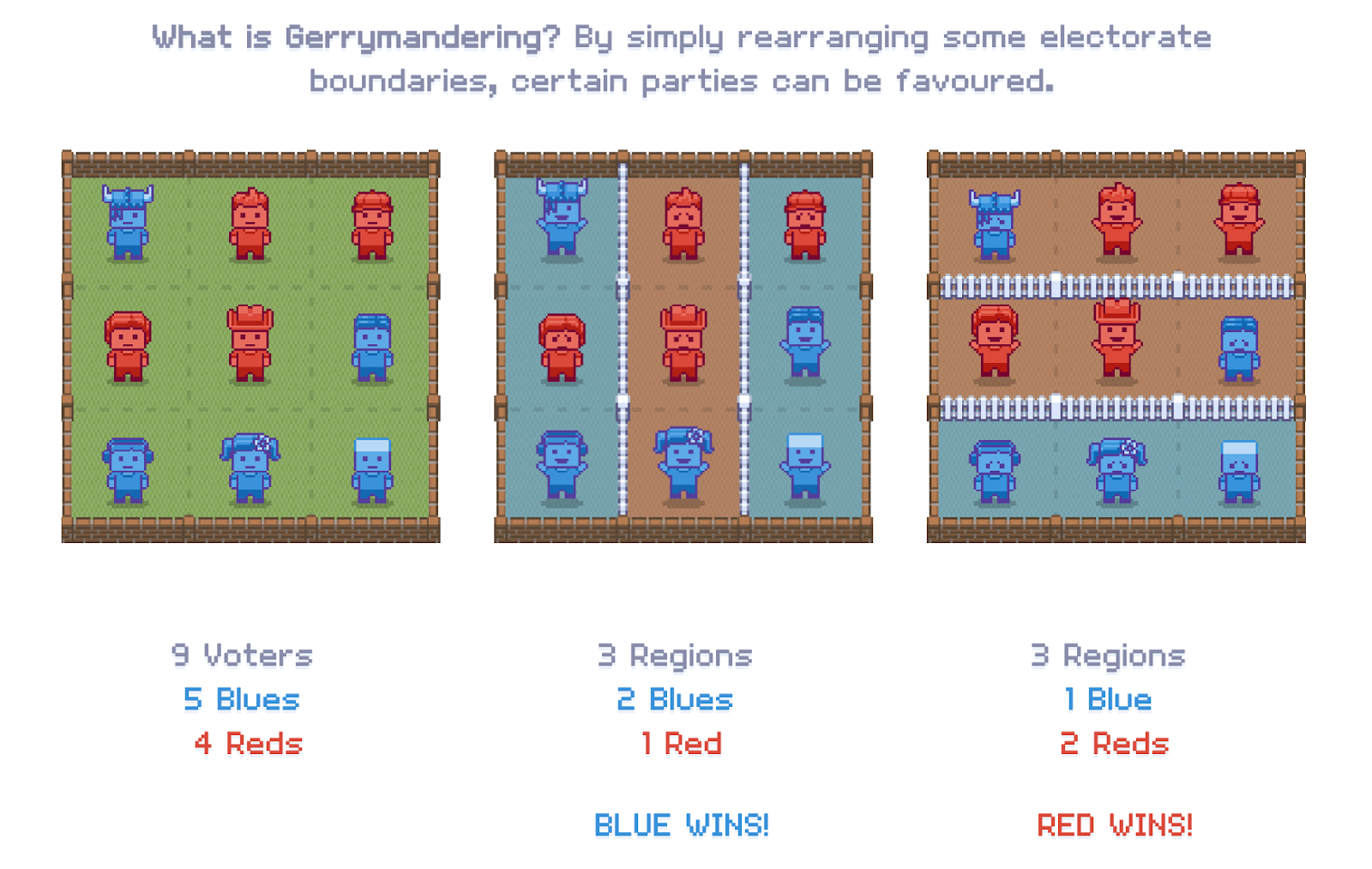 Our goal was to simplify the concept of gerrymandering as much as possible, so we arranged the game into a square grid and we made electorates represent groups of 3,5,7, or 9 people, rather than the thousands they would in real life. We assumed all voters would always vote for the same party, and we only used maps that required an odd number of electorates, made up of an odd number of voters. We took the mathematical core of gerrymandering – that by earning points for winning majorities in smaller groups, you can rearrange electoral boundaries in order to manipulate the overall outcome – and turned it into a puzzle.

Outside of the puzzles, it was important that we kept the details of the game vague. We never explicitly refer to either of the main political parties as anything aside from the reds and the blues, and we never explain the laws that allow for the player to gerrymander with such freedom. We didn’t want to muddy the core concept with details that aren’t relevant to what we were teaching and may only be relevant to a specific place in a specific time. Electoral rules may change over time, and they can vary between different countries or even different states. Abstraction made the concept universal.

From the core puzzle concept we had to make a game. The concept was fine as a teaching tool, but that isn’t good enough – a lot of work had to go into making the game fun.

There were a few things we chose to omit from the game because they weren’t fun. In reality, people don’t always vote for the same party, so we considered the idea of adding swing voters into the mix. This however would have ruined the puzzle aspect of the game. In real life, gerrymandering is not just used to make a minority win, but to increase the margin a majority wins by. This is an interesting concept, but mechanically it didn’t play much differently from the regular levels, and it seemed like a sudden and arbitrary shift in rules.

We had to experiment with map generation a lot to get it to a point that we were happy with. Initially, maps were generated from a predefined shape; each time the player played the same level the overall shape of the map would stay the same and only the specific placement or reds and blues would change. This had some problems however, the main one being that the maps wouldn’t be very interesting to play. Maps are assembled with the solutions in mind, so bad generation created maps that didn’t have interesting solutions. If the right answer is to divide the map into basic squares then it’s not an interesting puzzle and it doesn’t demonstrate the absurdity of gerrymandering. We wanted more snake-like regions, as you would see in some of America’s more gerrymandered states. These not only demonstrate the problem with gerrymandering more effectively, but are also more fun to play. It became our goal in level generation to push towards more snake-like solutions.

We also had to look at what mechanics we could introduce to spice up the gameplay. An obvious choice was squares that contained different numbers of people. It added to the challenge of the puzzles in an interesting way, and it was also a good fill-in for some of the rules that have to be taken into consideration in redistricting. Once we had added squares containing two people, we added squares with both three and no people as well. Empty squares allowed for players to really reach across the map in order to finish a district, which helped to emphasise the snake-like approach we wanted players to take.

A big focus for us was making the game feel like a game. Other games on the subject have tended to be formal and informative, rather than playful and lively. Our aim was to make the game feel as juicy as possible. We chose to use people to represent the voters, that way we could make them expressive. They have a whole array of animations they can perform: they cry when they are in a losing district, cheer when they win, they even wave to each other (but only to their own team). We wanted the UI to feel alive, so we made heavy usage of transitions and sliding UI elements. The sound is energetic and lively, and every line of text in the game has some character to it. It was important that despite the political subject matter, we made the game fun, because otherwise few people would be interested in playing it. Most of the time developing Gerrymander was spent making the game feel as alive as we could, the mechanics alone are interesting, but that would have meant very little if the game wasn’t inviting to the player.

One of the advantages we had with this project was that politics, like games, is about winning and losing. Unlike the Civilization series, there is never a disconnect between the goals of what we are simulating and the goals of the game. This was a great boon, as it allowed us to emphasise and parody the win-at-all-costs nature of elections.

The other great thing about focusing on the gameplay and making the characters and art abstract and exaggerated was that it made it clear where the line between gameplay and reality was. If we had gone for a more realistic tone then we would have had to be much more cautious about misrepresenting the truth. When Civilization presents the player with immortal leaders it is accepted as a fictionalised element. If the game instead had a system that simulated governments across the ages, then the designers would have had to accurately represent how each civilization’s government operated and evolved over time. If not the player may end up believing mistruths. It’s a lot like the uncanny valley, if you want to add fictionalised elements to a game and not present false information, then it should be so far from believable that it is absurd. If it is a little believable, but still inaccurate, then the player may not recognise the element as fictitious.

By playing the game, the player won’t come away understanding the political processes surrounding gerrymandering any more than they did going in, but they will have an understanding for the core idea of how it works, and that it presents a serious issue with the way elections are conducted in real life. We hope that players who knew nothing about gerrymandering before playing our game will be able to involve themselves in discussions about redistricting, because they now have first-hand experience gerrymandering an election. In a broader sense, we hope they develop an appreciation for how the electoral rules a democracy follows can shape that democracy.