Over the years, my thoughts on sexualized character designs have changed and for today's post, I finally understood some of the gaps in my logic on the matter.
Josh Bycer
Blogger
May 20, 2015

Awhile ago, I defended Dragon's Crown on the topic of secondary sexual characteristics saying that by showing the extremes of both genders, that the game was on the better side of things; not off the hook, just not as bad. But I've been thinking about it more and I had an epiphany on the matter of sexualized female characters that I wanted to share and it may surprise you that I was wrong before. 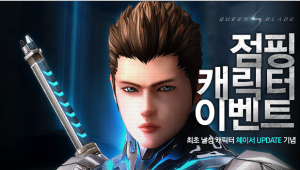 While the men are sexualized in Scarlet Blade, it is not based on the secondary masculine characteristics

Second is that for people who joke (or are serious) and say that the only way to make things equal would be to show men with giant penises along with women with unrealistic breast sizes are also wrong.

The penis is a primary sex characteristic while breasts are secondary; meaning to go this route would simply make things worse but on the other side of the equation.

In my previous post, I stopped there with declaring Dragon's Crown wasn't as bad as people were saying. Yes, from a technical standpoint that is correct. Overt giant rippling chests on men are just as sexualized as giant unrealistic breasts on women. However and it's a big however, there's more to this than just the technical side of things and why it's not as equal as we think.

The common defense that is brought out whenever sexualized men and women share a game once again has to do with the balancing of sexual characteristics. This is similar to the "power fantasy" argument which is shot down because the perception of an overt male is not the same as an overt female.

And that is where I had my epiphany on this argument and why despite it being technically balanced, it's not in the overall view of society. Speaking from an American perspective and experience, views of sex are very much defined from a masculine point of view.

No one asks whether it's demeaning to show men without a shirt on because men don't care about that. But we still live in a society that views sex very cautiously and the portrayal of any sexual nature is looked at closely. While it's okay for a man to go around without a shirt on, it's a far different story when a woman does as society treats and views a woman's body differently than a male's. 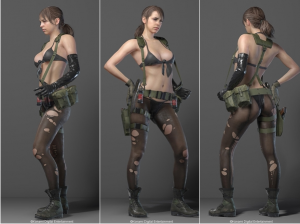 Yeah... No. It doesn't matter how the males are portrayed in MGS 5, this is high up on the sexist scale.

That is the heart of this debate and why we can't say that having sexualized men is a free pass for sexualized women; as even though they are technically right, it's not the same from a societal point of view.

And why having a woman sexualized next to a sexualized man doesn't solve anything as the connotation is different between the genders.

It's going to take a major shift in gender politics and society for the day when things are equal enough that sexualized characters are looked at equally and it would be possible to use this defense. Will it come during my lifetime? I don't have the answer to that.

What does the Future Hold?

What this means at least from my point of view is that games that feature sexualized female characters no matter how the men are portrayed are going to be considered sexist, at least to some degree. Until the day that society as a whole changes, that will remain the case and something that game developers need to weigh in when they're creating their characters.

Whether or not being sexist is enough to spoil your enjoyment of a game or impact a review is not up to me to decide and this is a matter that's not going to be solved with one post and one person talking about it. While there have been some strides made in the discussion of gender equality and women being treated fairly, there is still so much that needs to be done.