This blog is about the use of Quick Time events in games. Whether it's good or bad, how it's changed over time and examples of successful and unsuccessful uses of said trope.
Mark McCormack
Blogger
April 23, 2015

First off, for those that don’t know, a QTE (Quick Time Event) is an in-game event that usually prompts the player to press a specific button at a certain point in time. This can be either one single button or a sequence of buttons pressed in the order prompted on screen. This kind of event has become widely known as a “Press X to Not Die” mechanic, and its inclusion in games is very often met with distaste and irritation.

It should be said that while QTEs are notorious for breaking immersion and overall being a lazy game mechanic, there is quite a few games that actual use them successfully. However, there is also an abundance of games that use them badly and far too often!

In this post I’m going to give an example of a game that uses QTEs well, and a game (or two) that uses them badly.

Shenmue. This game was the first game I played (I believe) that used QTEs. It is widely referred to as the game that spawned the QTE, originally named Quick Timer Event in Shenmue’s game manual.

Created back in 1999, Shenmue was a hybrid game consisting of Action, RPG and Adventure game elements. It really was a great game… however, it is also chock-full of QTEs! Although it is regarded as being one of the best implementations of QTEs, I wonder how much of that is to do with it being one of the first games to do it. By now a large portion of the gaming community is just sick of the sight of QTEs, so upon hearing that a game has them in it some people are automatically turned off from that game. This wasn’t the case back in ‘99, since it was all still shiny and new. 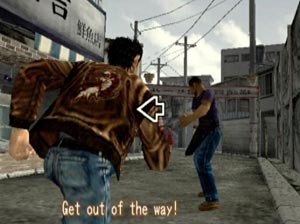 QTEs were used in Shenmue to add depth to the gameplay in areas where they couldn’t achieve the same effect any other way. For example, they were used quite regularly to make the games cutscenes seem more interactive and intense in what was essentially a fairly slow-paced game. A good example of this is a typical ‘chase’ scene. In one of these scenes Ryo (the player character) is chasing a guy down a busy street. The player is prompted with various buttons on screen during the event and has to react quickly and accordingly in order to dodge various obstacles along the way. Done properly you get a ducking and dodging awesome looking chase. Done wrong and you bundle your way through the street like you’ve had a few too many Saki’s, knocking into pretty much everything in your path and leading to inevitable failure.

This is pretty standard faire for a QTE but Shenmue just seemed to blend between cutscene and gameplay and QTE so well that you never really felt like you were aimlessly pressing buttons for no real purpose.

I can’t get no, Satisfaction (from QTEs)

And now onto a game that does QTEs badly or just way too much…. and believe me, there’s a myriad to choose from here. Games like Resident Evil 5 or 6, God of War, Heavy Rain (yes, i know it’s a great game, but it really overuses QTEs), Final Fantasy X-2, Tomb Raider, Battlefield 3… the list really does go on. Now understand that I’m not saying these games are bad, at all. I’m just saying they’ve used QTEs in what I feel is the wrong way. Quite often breaking you out of the immersion of the game and making you frustrated that you have to watch that whole cutscene again just to press that pesky X button at the end at just the right time.

In general, what I think makes a QTE bad, is if it kills you for failing it. Given that a lot of QTEs happen during plot heavy story moments, you are sitting there, intrigued by what’s unfolding and suddenly BAM! Press X!... Wait, what? I was watching the cutscene not the little icon on the bottom of the screen! Too late, you died. Restart from last checkpoint. Really?

Now that I’ve gotten that out of my system, on to the actual examples of bad QTEs.

What i like to refer to as the poor man’s God of War. I’m not a fan of button mashing action games in general, and to be fair, i actually quite enjoyed Conan for the fairly short game it was. But it uses QTEs for some crazy things! Probably the most annoying use of QTE for me is when they prompt you to mash the same button to move something super heavy.

Everyone knows Conan is this barbarian with almost herculean strength right? So cue the giant boulders and huge stone doors that couldn’t possibly be moved or forced open! Or, just walk up to said door and hammer the B button as fast as you can and watch Conan kick that doors butt! These kind of events just make no sense to me. Why not just have him open the door, with the same animation he uses in the button mashing sequence, but without me having to manhandle my controller at the same time? And boy do they overuse it! Pretty much every area has at least one QTE of meaningless button mashing.

Yeah, I know I said I’d give one example of good and one of bad, but there’s too many bad ones! Resident Evil 6 uses QTEs in quite a lot of ways, some are actually good, some not so much… 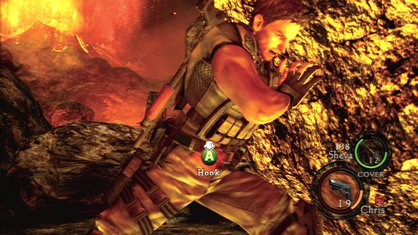 For me the most irritating one is the Airplane Cockpit scene with Leon. For one thing, the prompt tells you to do things in a really unintuitive way, like showing an analog stick movement but not knowing which analog stick it is. Then a misleading prompt that tells you to move the analog stick when actually you need to press the square button? And if you get any of this wrong by the way, you died. Restart from checkpoint.

There’s so many QTEs in Resident Evil 6 that someone actually took the time to make a song about it, which is pretty funny in all fairness.

The original purpose of Quick Time Events was to add depth to the more narrative areas of a game and to give the player a greater sense of immersion during cinematic cutscenes that were previously a very detached event in a games storyline. The player watched the cutscene, and then continued playing once it was done. With the introduction of QTEs the player was given a more direct influence on the cinematic elements of the game, causing them to be drawn further into the story than before.

Todays use of QTEs is quite different to this original idea. While the original QTEs were used primarily due to limitations in the technology at the time, making developers make use of them to perform certain actions not normally possible in the run of the game. With the more modern version of QTEs, the technological limitations are no longer the driving reason to use these events. They are used more as gimmicks and often feel stale and meaningless. The player could have easily done what transpires during a QTE without a QTE.

Having said all this, whether good or bad, the QTEs mentioned above all serve a purpose. The absolute winner in terms of annoying QTEs are the kind that are just there… for no reason apparently. It’s like the game developers just saw QTEs in other games and thought “Hey! Let’s put them in our game!” “But how do you use them?” “Does it matter?”

An example of a meaningless QTE is when a game prompts you to press a button during a cutscene or in-game, and if you fail to press it in time the result ends up being the same anyway, with maybe an extremely minor difference and no actual impact on the game afterwards in any way.

Going back to Resident Evil 6 briefly, they actually added an option to turn off the QTEs entirely. You can actually turn off a part of the game mechanics, that’s how much some people dislike QTEs.