Concluding my two-part look at micro transactions: As more games both F2P and retail attempt to position themselves as services, the importance of a store can be just as big as creating good content.
Josh Bycer
Blogger
March 27, 2013

Concluding my two-part look at micro transactions: As more games both F2P and retail attempt to position themselves as services, the importance of a store can be just as big as creating good content.


The act of selling the player items through micro transactions is still a fairly new concept in the game industry. Most designers treat their additional content as static items set in stone. But for the designers who really want to profit from micro transactions, you need to go the extra mile.

For games where the bulk of the profit comes from micro transactions, a virtual store is needed. However, just putting items on display isn't enough, and it requires the designers to become shopkeepers. While this may sound hard to do, when it is pulled off correctly it can lead to major profits, as evident by one company.

Riot Game's League of Legends has been talked about around the internet as one of the best examples of free to play games. And one area where Riot has excelled the best at is their virtual store.

Purchasable items aren't treated as static prices but instead as products to be advertised and sold. Every week Riot shuffles what champions are available for free play: allowing people to try out a variety of characters before deciding who to buy.

Every week there are sales on certain skins or champions for a limited time, to help encourage spending. Just like with any other product, Riot knows that the hardcore fans won't wait and buy the latest skins for their favorite champions. But with the sales, they can attract casual fans that aren't as die hard and still make money.

But where Riot with League of Legends excels at above other games is that their micro transaction prices aren't set in stone. In the majority of games with DLC, the prices the designers set remain that way for the entire life of the game, with exception to time limited sales. However, Riot will occasionally permanently lower the price of older champions and skins.

Given the fact that Riot continually puts out new champions, this is a great way to keep the prices of the store variable and help people buy more champions in the process. Riot's pricing scheme keeps easier to learn champions on the cheaper side, compared to more complex champions like junglers.

This is a way of creating a pricing barrier between expert and new players, as the new players would not be spending a lot of money to begin with.  New players will be able to easily afford viable champions who aren't as tricky to use, while expert players who are more comfortable will spend the extra money. This prevents the player from spending money on a champion that may be beyond their skill level and regret the purchase. 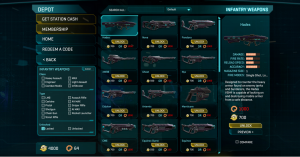 Planetside 2's store has a learning curve similar to actually playing the game, which is not a good thing for new players to discover.

It's important like with any store to understand your customer base. Not everyone buying items is going to be an expert player, so guiding newcomers into purchases with lower prices helps them get around the price barrier.

One area that is priority one, is making sure that the product and the store itself is explained clearly for the consumer. Above all else, you don't want people spending money on items that they have no idea if it was something they needed. All the careful planning and design would be for nothing if they feel that the store is set up to trick them into spending money on items they may not even need.

If you look at the store in Planetside 2 for example, its pages after pages of guns, equipment and unlocks that your new player would have no idea what they are looking at. All it takes is one purchase of an item that the player couldn't use to turn them off from the store.

Marking items as suggested for new players is a great way to avoid the store confusion, as you want to make it as painless as possible when asking players for money.

Now, not every game needs or is built around having a virtual store system. For titles that make use of a limited DLC schedule such as Borderlands 2, a store would be an unnecessary addition.  But if you are both trying to create a game that has a long life span and will be continually updated with new items, then a store system should be looked into.

But as we've seen with League of Legends, a store interface is not enough; it has to be treated like an actual store and not a system in a video game. You need to have people examining the metrics of what are selling, what's not and much more.

While it may seem like a lot of work for something trivial compared to the actual game, when done properly it can take a F2P game to new heights. As F2P design moves into 2013 and more titles come out on the market, designers have to put their best foot forward in convincing gamers to spend money on their title. And the best F2P games are not going to be viewed as a limited game, but as an ongoing development with continued progress and growth. Forcing game designers to adopt the role of salesmen, to make their title come out on top.