Genres are frequently marketing tools that help buyers know what kind of game players can expect. Much like a pop song repeats its chorus at some point, puzzle-platformers always have players jumping around. A haiku has a certain number of syllables and a rhythm games have some rhythmical pattern of actions.

One musical form is variations on a theme; Mozart wrote some variations on what we know today as “Twinkle Twinkle Little Star.” True to form, Mozart states the original theme and then takes it all kinds of frilly places. Mozart’s variations showed how a simple melody could become a piece complicated enough for concert performance. While the variations are virtuosic, their more complicated melodies are actually less expressive than the original melody. The purpose of the piece is to show the skills of the composer and the performer.

Pippinbar, of Let’s Play: Ancient Greek Punishment fame, composed a browser game called Pongs (2012) which explores the original Pong in thirty-five variations. The minigames are meant for two players, but it’s possible to play both sides at once. Much like Mozart’s variations extend “Twinkle Twinkle Little Star” to showcase a performer’s talent, Pippinbarr’s Pongs extends the original Pong. Pongs shows how the original Pong is delightfully minimalist, and instead of showing off, comments on other video game mechanics. The minigames aren’t very fun to play on their own, but their references to game conventions make for amusingly absurd situations. Many of the Pongs variations reduce common game mechanics to their logical, ridiculous ends, commenting on how these mechanics are ineffective play tools--distracting, frustrating, and irrelevant.

When video games reference other video games, they often do so to make fun of tired tropes. Cthulu Saves the World references the frustrating fact that enemies who join your party aren’t as strong as when you fought them; when Cthulu fights Sharpe, he has a “way higher HP max than he’ll have in a few minutes.” These allusions to video game conventions make players who recognize them feel like part of a gamer in-group, but don’t really call for change. Pongs, on the other hand, forces players through illogical game variations, asking them to confront these ideas head-on.

Think back to 90s educational games. Most of them capitalized on the novelty of interacting with a computer to drill children in science or historical facts--Math Blaster was basically a set of pretty flashcards, with a backdrop of blasting space trash. The Pongs variant “Edutainment” parodies this problematic game design by inserting the quiz mechanic into a game of pong. Geographical quiz questions interrupt regular pong play and alternately address player 1 and player 2. Knowing the capital of Jamaica could gain you a point! The constant interruptions are distracting, and it seems unfair that your opponent’s trivial knowledge should get her ahead in this game of physics and reaction speed. In a normal game context, interrupting play for a trivia question seems like bad design, effectively critiquing the disconnect between play content and educational content in modern educational game design.

The variant “QTE pong” criticizes another frequently-inserted gameplay element: quicktime events. Reduced to its simplest element, pressing a random button at a specific time seems very irrelevant to the game of pong: a way to make the game artificially difficult. By reducing the mechanic to its simplest form, the variation teaches players how things like QTEs can distract from core gameplay but also increase its unpredictability and tension.

Achievements in games are easy to make fun of, and “trophy pong” does so not only by having ridiculously patronizing trophies, but also by making the trophies obscure the playing field. The trophies cover the black background with white squares that blend with the pong ball, becoming a metaphor for how trophies in other games distract from the natural goals of the game. 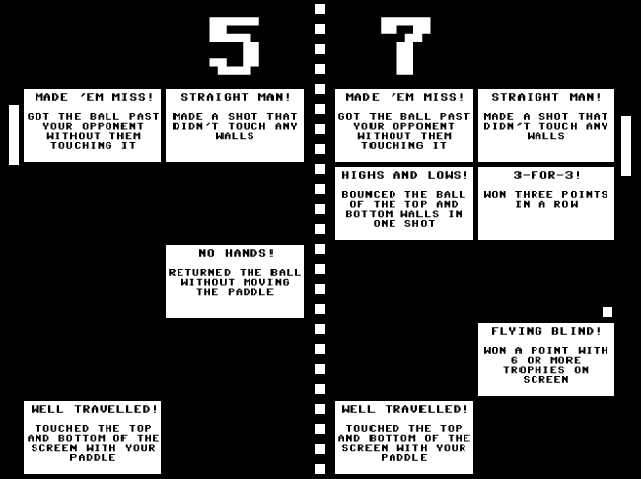 The parodies of well-known game mechanics are funny, but they are also significant in that they criticize games in their own medium. All literary criticism uses structured written language to critique other structured written language, but autocriticism (criticizing a medium in its own medium) in other forms is less common. The textbook/comic book Understanding Comics gets to the core of common comic problems precisely because it speaks through the comic form--it can show the flaws, not just talk about them. Pongs speaks past the language of analysis, and critiques game mechanics through irrefutable experience.

Pongs forces players to confront tired game mechanics. It’s up in your face, asking, “You think pressing random buttons quickly is fun?” While the variants themselves seem more like punchlines than games, the joy of Pongs is in what it says about other games. Pippinbarr’s playful critique in Pongs shows not only an awareness of video game conventions, but also how some of those conventions are distracting, frustrating, and irrelevant. Pippinbarr himself found the variations instructive to his study of game design: “it has been in playing the games and seeing how much of a difference a tiny rule change makes to the experience (and strategies and all that) of play that have been illustrative [of what games might be like].” I’d like to think of video game variations as an emerging genre--one that will keep us honest about what’s awesome in games and what ends up being frilly filler.