Having a character that works within your game's mechanics can act as a fun and accessible tutorial system. Our approach avoids the need for a skip button without wasting the player's time.
Jeremy McCurdy
Blogger
March 24, 2017 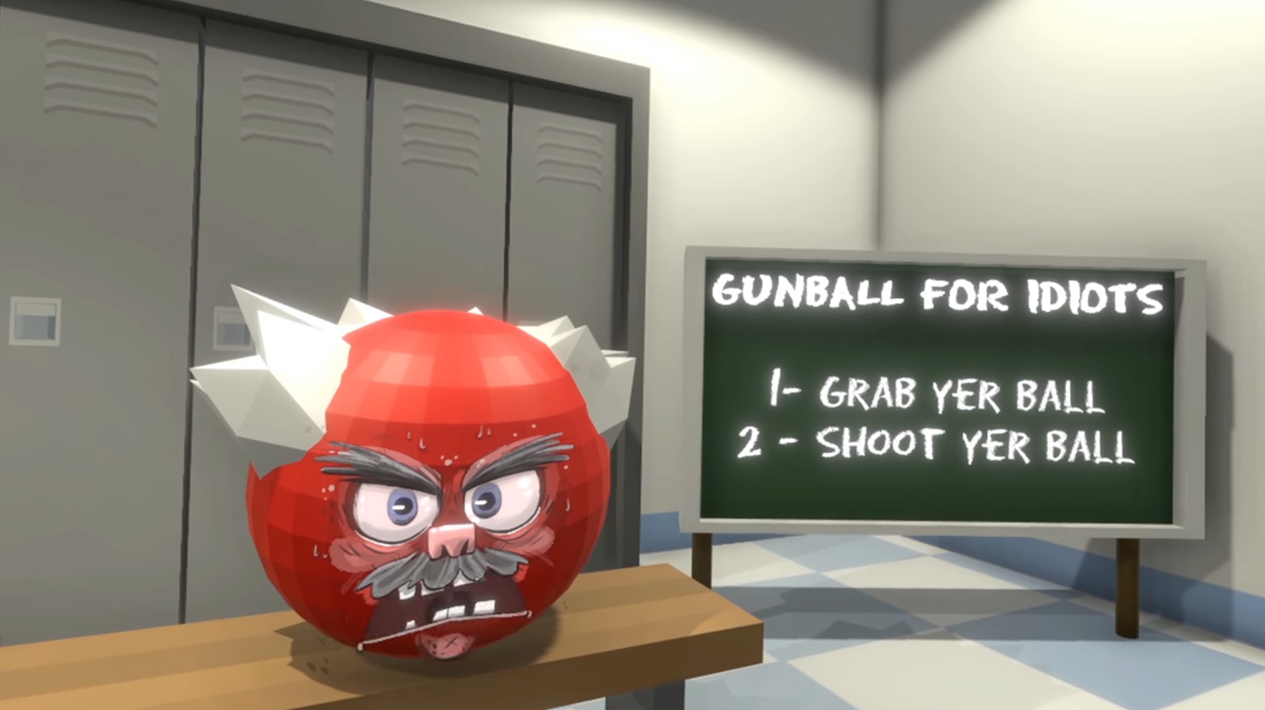 This was originally posted on our development blog. For the uninitiated, Gunball is a VR sports game for the HTC Vive where you serve balls up in the air like in tennis, and then hit them into nets by shooting them with a revolver.

Our trailer kicked off with a grizzled old ball explaining the fundamentals of Gunball. He’s called Coach Ball, and we didn’t just make him for the trailer. Coach is your mentor and companion in everything gun and ball related, but primarily he’s a hidden tutorial.

On paper Gunball sounds really simple, just toss balls up and shoot them with a gun. When it’s someone’s first time in VR, how you actually do that can be difficult to understand. Coach provides the player with a tutorial that allows them to get comfortable with the game’s mechanics at their own pace.

Before you begin playing, you are placed in a starting area where Coach Ball sits at your feet yelling at you until you pick him up. He will tell you the controls to do that… and also yell a lot of nonsense (Coach is a little senile). One of the biggest hurdles for new players is learning that you have to reach out to pick up balls, so Coach is on the ground, and you have to bend down and reach out to pick him up. If you accidentally shoot Coach and send him flying off into nowhere, that’s no problem, he’ll reappear right at your feet after a couple seconds.

After picking him up, he’ll explain how to throw and shoot the ball. To your side is a net to shoot him through. If you manage to toss him up in the air and shoot him through the net, the game will begin. If at any point you drop Coach, throw him away, or shoot him somewhere out of reach, then he’ll reappear at your feet.

Every step of the way you are free to make mistakes and experiment with the controls until you are comfortable. The tutorial is as short or as long as you make it. If you spend a bit of time playing around with it, you should be able to play the game just fine. You may not be an expert yet, but you’ll get by.

Making Coach a voiced character instead of just a normal ball on the ground turns the tutorial itself into a small VR experience. It will help the player feel more comfortable sticking around on the tutorial screen to play with the controls, instead of rushing to play the game without understanding it.

We think this approach to teaching players is the best way to handle a tutorial without slowing things down. You’ll also be able to replay the tutorial with Coach any time you want. That makes Gunball an excellent first VR experience if you’re showing your Vive to some friends!