With the prevalence of free to play, you need a solid a meta game mechanic to monetize. Some advice and tips for planning your meta game.
Peter Lynch
Blogger
September 04, 2017

So what is a meta game and why is it so important for free to play games? From searching online, you will see there is not one definitive definition for a meta game. From our perspective at Fierce Fun, a meta game is a superset of game features that are not directly related to the core game mechanism. In essence, it is the actions that a player needs to do, to keep playing your game for free. So it might be a daily login reward, a set of quests, a gacha system or some other feature concerning resources. For free to play games, it is vital to keep players engaged. So the game does that… well partly. To the continue to play the game (for free), a player needs resources. These might be for buying new equipment or content or for just staying alive and maintaining health. The meta game allows a player to acquire those resources, sometimes by just playing the game. Even for relatively straightforward meta games, they still need to be designed. They can’t be ‘bolted’ on afterwards, a mistake developers make. Meta games make the design of free to play games increasingly complex and time consuming. You can see why this is an issue for solo game developers.

If you are designing a free to play, our advice is to first acknowledge it. Many developers design a game and leave the payment stuff until the end. Unfortunately, you probably won’t make any money this way. Free to play is a bit of a misnomer as players are effectively paying you with their time. In our time poor, multi-device, multi-platform lives, you gotsta to pay for them player eyeballs somehow! That is where your meta game kicks in.

Our second piece of advice is to start the meta game design as early as possible. It has a major bearing on your game’s pacing and difficulty progression curve. Without a basic meta game framework and currency/resource system in place, you won’t be able to properly expand your game mechanic into a coherent set of levels.

Thirdly, study good examples of meta games…. no point reinventing the wheel.. or game loop in our case. Currently the masters of meta are Supercell. What makes them so super? Obviously good game design but large players number and effective analytics really helps. Also they have learnt how to successfully adapt the Japanese ‘gacha’ mechanic for western players. Others are doing this but Supercell are probably the best as seamlessly adding it to their games. 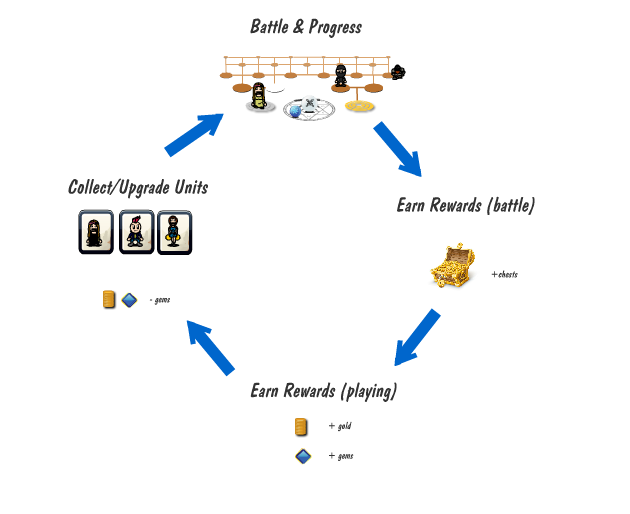 The meta loop from our upcoming game Mindframe Arena

And lastly, another acknowledgment is needed. Mobile games are fundamentally different from most PC and console games. The players, the mechanics, the attention span, the business model, the UI, the backend services, the frequency of updates…..  I could go. Mobile games are easier to develop than PC/console however they are not necessarily easier to design. If you are going to make a mobile game and you are not a mobile gamer, think twice about it… or get a ‘real’ mobile gamer on board.

Free to play has now moved beyond mobile and Web gaming. You may not like it but huge number of players are used to it. So if you are in this space, embrace the meta!