Perspectives of Storytelling: 'Child of Light' vs 'Valiant Hearts'

A comparison between the different methods of storytelling in 'Child of Light' and 'Valiant Hearts'.
Alice Rendell
Blogger
January 07, 2015

Two of the games I had looked forward to playing the most in 2014 were Ubisoft’s indie-style offshoots Valiant Hearts: The Great War and Child of Light. Child of Light in particular had caught my interest very early on for being a 2D side-scrolling JRPG with turn-based battles. Something not a million miles away from Zodiac, the game I am currently working on. But mainly it was because the storyworld and characters appealed directly to my heart. Child Of Light was described as an Arthur Rackham inspired fairytale world - two themes that I personally adore - and the design of the main character Aurora was so different from what you normally associate with JRPG that it marked the game as one to look out for. Valiant Hearts on the other hand, although undoubtedly interesting, fell second in my anticipation and as the storyworld of Child of Light was such an obvious match for me as both a designer and a player, I was expecting great things. What happened, however, when I finally came to play these games, was the complete opposite of my expectations. Instead it was Valiant Hearts which I fell in love with and Child of Light got left behind as it continued to disappoint. Of course this could be chalked-up to expectations shadowing reality, but ultimately it was more than that. Child of Light made some fundamental storytelling errors, which when set side by side with Valiant Hearts seemed not only unfortunate but a real shame.

Child of Light: Is this really the place and time to continuously try and speak in rhyme?

When I first read that Child of Light would be a playable poem I rejoiced at the prospect. It sounded so romantic and I had visions of lavish and eloquent dialogue painting beautiful imagery. To me it made sense after seeing the wonderful hand-painted artwork and I thought the two were a good match for creating this fantastical dream like world. However, what was delivered instead was rhyme. Dialogue, narration, voice-overs, everything rhymed! True it varied from couplets to verse but the rhyming was consistent throughout and I was disappointed to see this interesting idea of a 'playable poem’ be reduced to rather flimsy nursery rhymes. Anyone who knows about poetry understands that it does not need to rhyme to be labelled a poem and for a writer this seems like such an elementary mistake. At times the writing even seemed as though it didn't want to rhyme and was somehow forced to fit into this initial vision, which had once sounded great on paper but ultimately wasn’t working in practice. After persevering through the initial text I found that eventually I couldn’t engage with it anymore. A massive disappointment after what promised to be such a perfect storyworld for me. Ultimately the rhyming blocked my enjoyment of the game and unfortunately tainted the better aspects, such as the battle mechanics, characters and art. Here is what I think are the main reasons it didn’t work: 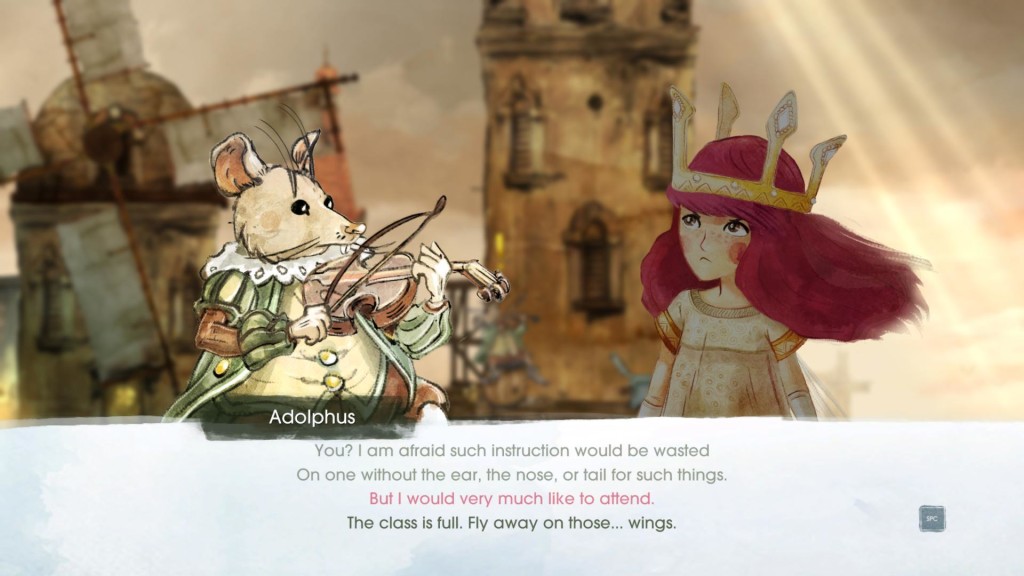 The rhyming dialogue in ‘Child of Light’ made story difficult to digest.

Valiant Hearts: A lesson in how to tell stories without words.

One of the main storytelling successes in Valiant Hearts: The Great War was its ability to cleanly communicate story, characters and events, without text and dialogue. Outside of UI, text only ever really occurred in chapter cutscenes, everything else was suggestive, using character gestures and speech bubble animations. The animations in particular were very effective, as they not only gave personality to the people who were saying them but also managed to instruct the player for their next action by only using images. It is very risky to decide to make the majority of your in-game instructions image only - we often resort to the safety net of ‘text-as-backup’ just in case some players don’t understand - but with Valiant Hearts everything was clear enough to be understood instantly and I think it not only shows that this can be done, but also gives a masterclass in how to do it properly. As the story progressed and I became more and more involved with the characters, I found myself becoming incredibly emotional from the unfolding events. At this point I had to stop and remind myself that I had been brought to tears (yes I cried more than once) by only a bunch of moving images, a rare achievement in a world where most media relies on the back-up of words. For me Valiant Hearts is worthy of recognition as a powerful storyteller and deserves to be placed next to the other greats of wordless storytelling such as Pixars’ Wall-E and the classic animated short The Snowman. 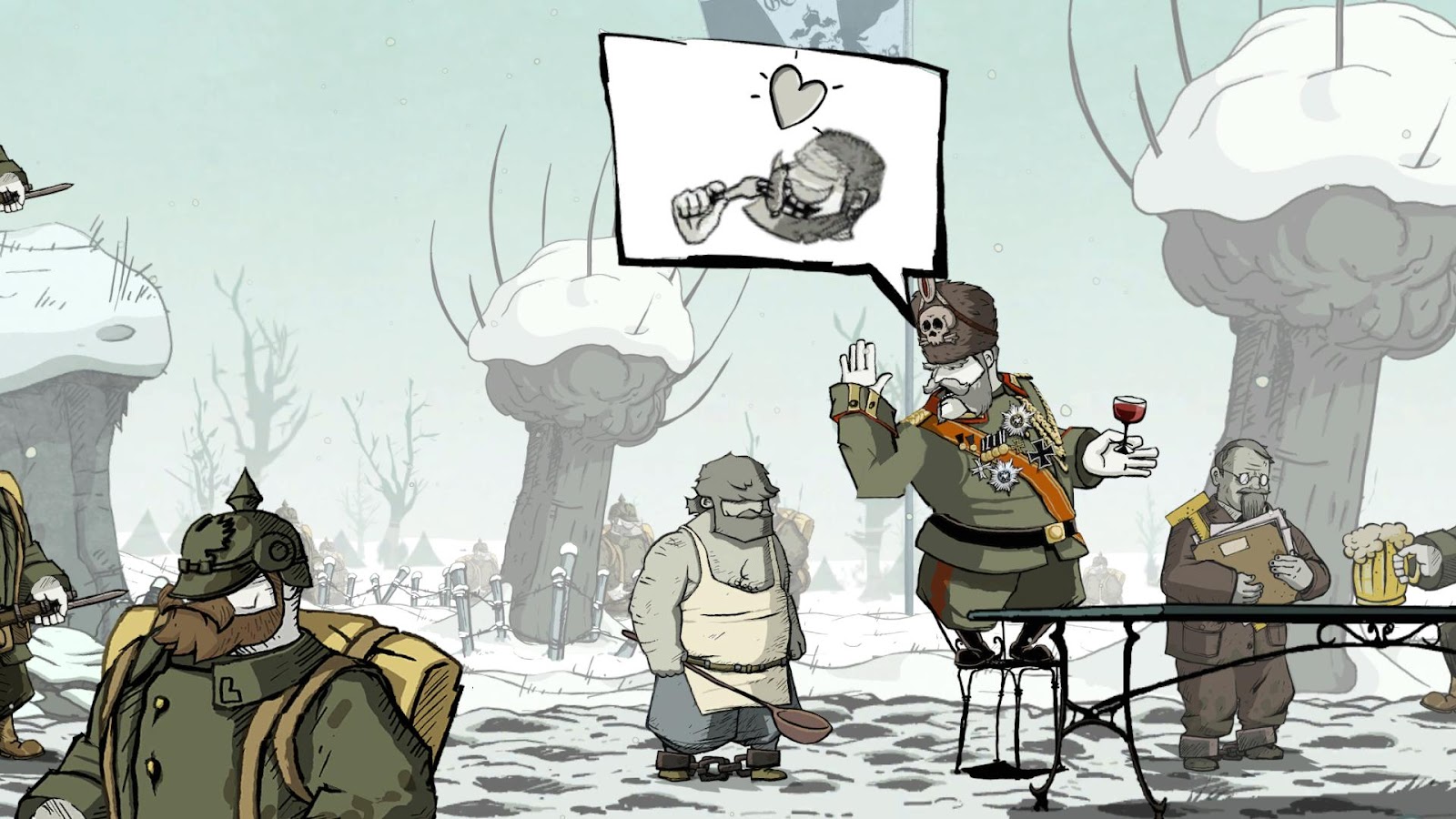 ‘Valiant Hearts’ manages to clearly communicate story and instructions by only using images.

Achieving wordless storytelling is only one of the many great ways Valiant Hearts depicts story. The other is with the mechanics itself. Each task that I performed in the game felt like it was custom made, from fixing broken pipes in the context of puzzle solving, to action based sequences where you avoid falling bombs. Everything felt like it was to support the narrative of the game and not the other way around. Ultimately when boiled down to its basic gameplay there was nothing particularly new or revolutionary in Valiant Hearts, but it were so imbedded into the context of the world that it never felt unimaginative. Instead it almost felt like a different experience each time, even when I knew the developers were reusing mechanics from earlier in the game. This is in direct contrast to Child of Light - outside of the battle gameplay - which also had puzzle like interaction with the environment. For example, there were pressure puzzles where you must activate buttons in order to open gates that would close again quickly. This is a fairly classic type of environmental puzzle and although not out of place in the world, it did not enhance it either. Why does Aurora need to rush through this particular section when I can spend the rest of the time flying around at my own pace? Why does this particular part of the environment have lever and doors whereas other similar parts don't? In Valiant Hearts whenever I had to rush through a puzzle it was because the story required it. If I had to go slowly through an environment - avoiding landmines for example -  it was because it worked in context. Child of Light’s puzzles were not altogether unenjoyable and were even fun at times, but when compared directly with Valiant Hearts it highlights the displacement they had within the universe.

‘Valiant Hearts’ used puzzle mechanics to match the story whereas ‘Child of Light’ seemed to just insert them into the environment.

Sidekicks in adventure games are an age-old game custom and are not always easy to get right. Very often the sidekick falls into the category of either annoying or useless, and sometimes even both (Navi anyone?). In Child of Light Ingniculus unfortunately fell into the both of these categories. Not only was he kind of rude and unlikable but his in-battle ability to slow down the opposing team - although interesting - wasn’t wholly necessary when you consider you can already do this with spells and potions. This Navi-esque firefly also didn’t really seem to fit into the story convincingly, giving that horrible sidekick feeling of being sent to aid the player… just because. Valiant Hearts on the other hand had the dog, which not only aided the player in puzzles but also helped expose and support the personality of the characters you were playing. When one of the main playable characters risks his life to save the dog you suddenly know more about that character’s integrity, bravery and sensitivity, creating a very large communication of personality with just a small gesture. In addition to this, using the dog in puzzles not only felt fitting but correct. This is because the nature of the environment and the context of the scenario made it seem that the tasks really could only be accomplished by a dog, rather than that alternative feeling of thinking they had been designed for him. This is a far cry from the slightly disjointed inclusion of Ingniculus in Child of Light. When directly comparing the two games we can again see where Valiant Hearts prevails and Child of Light once again falls short.

The dog sidekick in ‘Valiant Hearts’ became a vital part of the story and gameplay, whereas Igniculus simply felt like a weak addition.

Having spent the whole article highlighting the issues of storytelling in Child of Light I would like to say that I did enjoy the game. In particular I found the battle system to be immensely fun and the artwork was absolutely breathtaking. But ultimately the issues with the writing meant that I could not engage with the game in a way I would have liked, and my expectation of a ‘game to fall in love with’ was replaced with ‘just a game I quite liked’. Child of Light’s shortcomings were not helped by the fact that I played Valiant Hearts so soon afterwards, creating a stark contrast between the two which could not be easily ignored. However, on every point where Valiant Hearts makes a success there is a lesson to be learned from Child of Light’s mistakes, and when comparing the two directly they highlight the need not only for a good story but the great importance of storytelling too.

So finally I’ve said all that I wanted to say,

It is time for me to leave and bid you good day!