Everybody gets down on themselves sometimes. I definitely do. Sometimes feedback hurts (a lot), even when it's said jokingly, but the feedback wouldn't exist if there wasn't something behind it all.
Tony Yotes
Blogger
October 20, 2013

Everybody gets down on themselves sometimes. I definitely do. Sometimes feedback hurts (a lot), even when it's said jokingly, but the feedback wouldn't exist if there wasn't something behind it all. There is  room for improvement and you should always be trying o better yourself at your craft. You just may need to think positively for a bit to pick yourself out of the dumps so the fumes don't keep you from seeing where you could go next.

I get a lot of flak for working on my games or this blog instead of hanging out as much as everyone else does, but I see this as a job, a fun one, but still a job. Just like any job someone would put aside time for. I see myself practicing game development and slowly improving, my roommates see me making mobile games they'd never like to play. I can understand why. It's what keeps me from hating them and hating myself.

My roommates are my go-to playtesters because they offer to be, and really do give me good feedback. Much like young children, they won't sugar coat it when something sucks and while they may not know how much time and energy went into something or how much more would be needed to do something else, they can tell me exactly what's missing.

Sometimes the feedback is given in an unhelpful way, but even destructive criticism can have some truth behind it. For example, if someone says a certain menu layout is stupid then refuses to elaborate further, you can think about the situation objectively and solve a problem you never noticed. Maybe the interface was not intuitive, maybe certain buttons didn't stick out enough. Maybe some buttons should be closer together. Maybe some buttons should have unique shapes to draw the players attention.

It's up to you as a game designer to solve these problems but sometimes negative words seep into your mind. I'm a college student. A self-taught indie game developer trying to learn the ropes before diving into something big. I can't make epic blockbusting games yet.So what do I do when I'm starting to feel like a loser?

What do I do when I feel like everything I try and will try sucks? What about when I feel like my ideas are unoriginal? How do I handle talking to people who put me down despite not knowing what game development is like for themselves? I tell myself what I always did from the start: I'm learning.

Every day I get more experience and I keep my goal in mind. I want to make the greatest action RPG on mobile devices. There's no way I could pull that off today. But two years from now, maybe I can. Think everything sucks? It probably does in comparison to professional work. I'm doing great for my skill level. Ideas are unoriginal? What hasn't been done already? Almost all games are based on other games (genres exist for this reason), just make something fun without recreating someone else's game step-by-step. And for people bashing everything outright, tell them "Let's see you do better."

Making games is tough, and unless you have epic amounts of passion pushing you forward, you're gonna sink. There's no way to keep that passion alive if you can't motivate yourself, so stay positive. If you love doing something, you keep doing it. Nobody ever picked up a guitar for the first time and topped the charts the next day.

Everybody sucks at first. Be proud of your work, because you'll look back one day and smile at how far you've come and how good you were even back then.

I'm basically saying practice makes perfect and you should get the duds out the way in order to make something better, but in the words of a wise dog: 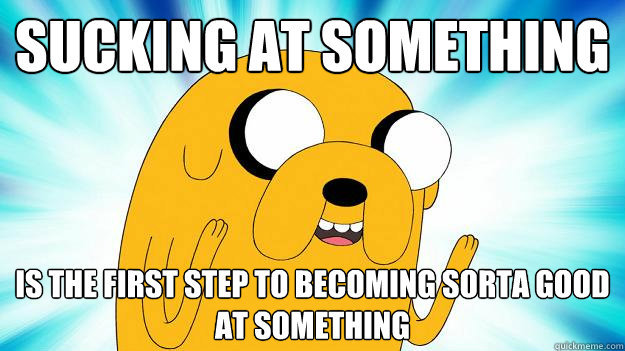