Options for Ethnicity in Character Creators, Part 3: Faces and Bodies

Are you able to create a wide variety of diverse playable characters in fantasy RPGs? We continue to analyse ethnicity in character creators in fantasy RPGs, part 3 of 3.
Frida Svensson
Blogger
February 17, 2016

This is the final part of an article in three parts about self-representation in character creators in fantasy RPGs. The examined games are: Allods Online, Dragon age: Inquisition, Guild Wars 2, Kingdoms of Amalur: Reckoning, Neverwinter, Rift, The Elder Scrolls Online and World of Warcraft.

In the previous parts we discussed the importance of being able to create a character similar to one's self, and looked at what our study showed concerning the available options in hair and skin tone. In this last part we will show the results of facial features and body customization.

Allods Online, World of Warcraft and Kingdoms of Amalur: Reckoning do not offer any facial customization and only have preset faces. Kingdoms of Amalur: Reckoning has limited options but still provides different facial structures and appearances with its faces, allowing for moderately different characters and arguably several different ethnicities. Paired with various skin tones and hairstyles you can create a range of diverse characters. But Allods Online and World of Warcraft mostly offer different complexions than truly different faces. The males have options for some varieties of wrinkles and various degrees of angry expressions but only slight differences in facial features. The females have even fewer differences in facial features than males, with their preset faces mostly consisting of the same face but with different eyebrows, eye color and lips. By studying the presets, we think that simply applying a darker skin tone on them is not enough in terms of portraying different ethnicities. Only offering idealized White European features feels exclusionary to the players.

Of the eight examined games, three of them randomize the character’s features or presets every time the player enters the character creator, ensuring that every option has a chance to be seen by the player and to show different combinations of features which the player might not have thought of. The other five games have different pre-designed sets of available character features. In other words, depending on what the developers choose, some options may not be showcased the same way as others. In Neverwinter, out of the 12 available presets for male humans, four of them are arguably of another ethnicity than White. So the developers have to choose the ethnicities’ visibility, and more often than not it’s not evenly distributed. Because of this, we think that having the features randomized is the better option. Half of the examined games have an option for the player to randomize the features.

To be able to collect data of the facial features, we developed a visual template with markings where the biggest and smallest measurements start and end. The biggest or widest were marked in blue and the smallest or thinnest in red. It’s ultimately an approximation, but this way it’s possible to see how far the character creators let the player push the features, without applying any personal judgement. They are not meant to be an indication of how any real life ethnicity does or “should” look. The facial graphs show the minimum and maximum range of the fictional races in the games, and thereby the allowed variety of face customization. 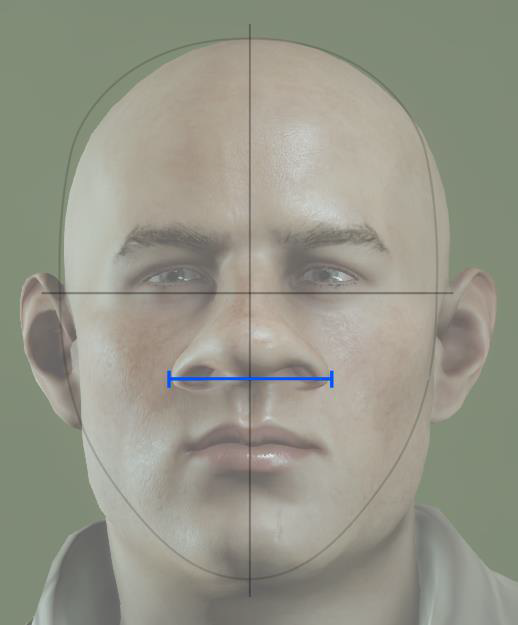 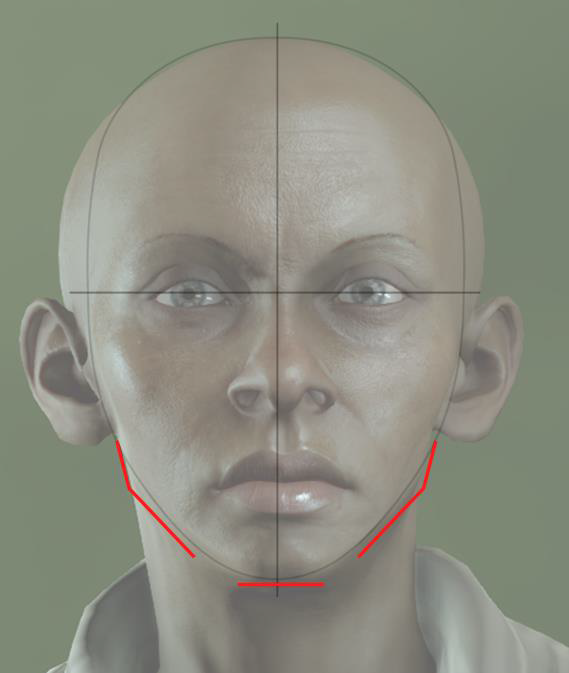 When it comes to customizable facial features it’s clear that Dragon Age: Inquisition excels in that area, as the space between the blue and red markings are wider than any of the other examined games, and the male and female characters all different races each have a fairly equal range. While pushing every slider to their extremes gives the character distorted proportions, by allowing the features to be pushed that far it ensures that the player is able to create very different characters with very different features. It strives to make sure that no type of facial feature is left out. Out of the examined games, it gives the most range to customize the facial features. Two thirds of the interviewees who had played Dragon Age: Inquisition favored it because of its generous facial customization. ”Instead of a few set presets you could scroll through it gave me sliders and color wheels, which added a lot more options. It insured that almost anything I could imagine, I could make.” It shows that, even though pushing the extremes makes for unusual faces, a generous range of facial features is preferable because it gives a bigger freedom to create a set of diverse characters. Another interviewee explains: “I like when you're able to create characters that look real, I don't like when they look too perfect or artificial. For me it's important to create a character with an appearance that seems to have an interesting personality. That's why I like the character creation of DA Inquisition because you're able to create a character with flaws.”

The rest of the facial graphs from the other examined games are available for view in our thesis.

When comparing the other examined games with facial feature customization, it is quickly noticeable that they more often than not offer little to no variety when it comes to different features, and especially so for female characters. When comparing the Human race from Dragon Age: Inquisition and the Imperial race from The Elder Scrolls Online we clearly see the contrast in what the player is able to do. With the Imperial race there is essentially only one look, and that leaves accessories and hairstyles as the only way to create a unique character. We’re aware that they are different games, one being a narrative-driven single player game and the other a MMORPG, in which the Imperial is one of four human races, but we still think that it showcases the advantages of offering a wide range of customization.

Neverwinter, The Elder Scrolls Online and Rift also provide different facial textures when changing a face preset or face type or in different complexions. While none of them offer a very generous range of feature customization, the different types of textures help define features and form the appearance of different bone structure, in addition to skin complexion, even if the mesh only has minor differences. So if a game has limited options in the facial feature customization as in The Elder Scrolls Online, for whatever reasons, by adding additional face textures there are still good ways to offer further variety. 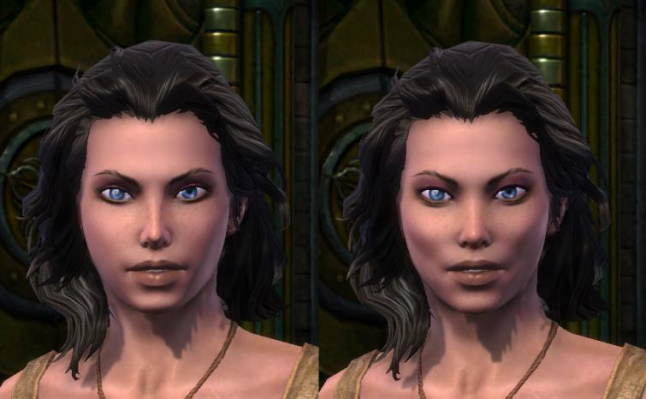 Many of the interviewees brought up body customization as a category they wished would be expanded upon. Of the examined games, five of them offer different degrees of customization. It varies from only the option of changing the character’s height in Rift, to customizing every individual body part in The Elder Scrolls Online, which also offers the option of creating a relatively fat character, something that we consider rare in games overall. In response to what their favorite character creator was, one interviewee answered: “Star Wars: The Old Republic because it had diversity of body types that gave me the ability to play as a fat character, which was the first time I'd ever encountered that as an option and not made to feel like it was a joke option.”

It is understandable that body customization is usually limited since there’s a lot more to take into consideration to make it work. But an effort in that area is always appreciated because overall there is a desire among the interviewees to be able to create a character with a body type other than the idealized hero physique. If developers decide to add a more advanced body customization and they include the ability to make more varied body types it would help players to create more diverse characters, as we can already see in the games that offer it.

Most of the games we examined were very extensive and covered a lot of options in different categories. But none of the games offered proper representation for people of a wide range of ethnicities. Some of the games excelled in one area, taking care to offer either a wide range of hairstyles, skin tones or facial customization, but if they did they faltered in other categories. More often than not, only a few token options for non-White ethnicities were available, and those were usually the same few.

Although the need and want for more diverse options exist, this need isn’t met yet. There are games that have taken the extra step towards being more inclusive and overall there’s progress in newer games. But as the non-White interviewees answered in our survey, they can’t make an accurate representation of themselves in most of today's character creators, even in games we haven’t examined for our study. But adding just a few more dark skin tones, a few more hairstyles that aren’t straight textured, and providing either a few more preset faces with different facial structures or allowing a wider range of facial customization would go a long way to include more players since these are categories that matter most to them. They don't need to be expensive additions; it’s rather a question of diversifying the available options. Time spent on yet another light skin tone and straight textured hairstyle could be used to create a more equal number of diverse options. Because if there’s only one playable race labeled “human”, and it’s both westernized and White with only slight variation in shades of color for diversity, consciously or not, it’s being assumed that humanity as a race can only exist in the fictional world if it’s primarily coded White. We think it’s time to disrupt the notion of White as the default and recognize the player base for the ethnically diverse group that it is.

Authors: Ylva Ljungqvist, Frida Svensson
This article is a reworked edition, in three parts, of a study we made in June 2015.
Read the full thesis here.