Open-World RPGs and the Hinterlands Problem

This article contains minor spoilers for the first act of Divinity: Original Sin 2, including location and quest names.

As the market for modern role-playing games grows, developers are under increasing pressure to appeal to as many niches as possible. This is a problem endemic to mainstream game development - AAA development in particular - but Western RPGs are arguably the hardest hit by this. In this genre, attempting to accommodate every type of player results in a vast diversity of viable approaches to quests, story, and combat, but can give rise to disparate elements of the game and its narrative clashing with each other, resulting in a final product that feels vague, unfocused, and unguided. This pushes players into feeling bored or frustrated, which can quickly translate into disengagement and unfulfillment.

It’s In The Name

In Dragon Age: Inquisition, released 2014, a zone called the Hinterlands perfectly embodies this problem. It’s the first open-world area players visit, and it’s gigantic: larger than the entire playable areas of the first two Dragon Age games combined, according to the developers. It’s also densely packed with non-player characters, enemies, and quest content. In total, it contains more than fifty sidequests, which is a dizzying amount of content by any standard. This should be laudable, but in practice it’s a gigantic (and avoidable) misstep. When players were exposed to the zone, they got trapped in endless checklists and meaningless, irrelevant busywork that actively hindered story progression. Where BioWare tripped up in this situation was their failure to provide and, most importantly, maintain narrative and systemic motivation for players to continue out of the Hinterlands. There are a number of potential solutions to this: having sidequests require travel to other zones, for example, or designing some sort of in-game narrative event temporarily pushing players out of the Hinterlands to a scripted story segment (again, in another zone). A fundamental part of the Hinterlands Problem is that any momentum the story had before players entered the zone quickly dissipated. Something along the lines of these solutions would leave the Hinterlands and its fifty-four sidequests largely intact, but push players back into progressing through the game’s narrative. 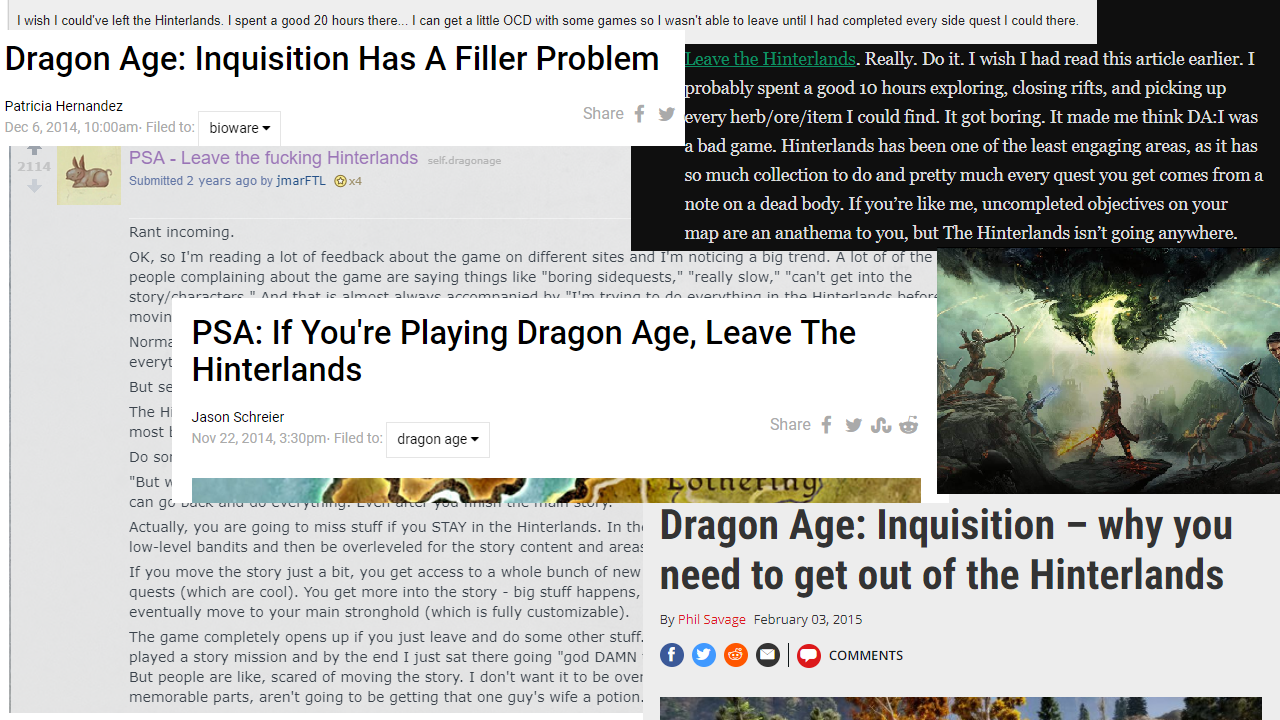 Of course, Inquisition was hardly the first, or last, role-playing game to suffer from this - it’s just a highly visible example. Overly large amounts of quests and sidequests have historically been a selling point for RPGs, especially in BioWare’s earlier titles. However, that doesn’t necessarily mean that a large number of quests, or amount of narrative content in general, is the problem. The Hinterlands Problem is a complex beast, but a large contributor to it is the overall design itself being just a bit too shy to lend players a gentle nudge (or a firm shove) towards progressing through the game, narratively and systemically. It’s easy to understate the difficulty of doing this well: game designers constantly walk a tightrope, balancing the need to allow the player the illusion of organically advancing through the game with the need to make sure they’re actually advancing through the game and not wasting time rescuing lost cows. The solution isn’t just in removing the meaningless busywork or putting less context in: it’s a problem that has to be attacked from multiple angles, and it can require a multidisciplinary set of skills to fix.

Divinity: Original Sin 2, an open-world RPG released this year, also suffers from the Hinterlands Problem. When the story and gameplay are heavily scripted (the narrative bottlenecks, so to speak) the game is lush, exciting, and does a splendid job of allowing the player to devise creative solutions to the narrative and combat-based puzzles that it provides. However, when the player is released into open maps such as Fort Joy and Reaper’s Coast, the narrative thread very quickly unspools into a tangle of half-finished quests and hinted-at storylines. Unlike in Dragon Age, though, most of these quests aren’t meaningless busywork. With few exceptions, they’re interesting, quirky, and humorous. Where many sidequests in Original Sin 2 do fail is in maintaining the game’s narrative cohesion, and this is a problem with potential solutions in tweaks of both its narrative design and its user interface.

When we look at Original Sin 2, we see a flawed gem: a sequel that had to live up to a hugely well-received predecessor, while introducing new mechanics and ambitiously pushing the envelope of how game systems and narrative interact. The downfall of the game is in its ambition: while the line-to-line quality, and the quests themselves (viewed individually) are stellar, the narrative cohesion falls apart when the player finds themselves pursuing any more than a few of the dozens of elaborate, impressive sidequests. It’s not a given that the average player can keep track of all these narrative threads, and a major contributor to Original Sin 2’s lack of guidance and cohesion is the game’s quest log (or Journal, as it’s referred to ingame). In a title that executes well on almost everything it tries, the Journal stands out as a piece of the user experience that disincentivizes its own use and largely fails to guide the player through the narrative as a whole. Progression-related quests are given no special markers, and there’s no way to “bookmark” a quest, so players must constantly bounce back in and out of the menu system to keep track of what they’re meant to be doing. Not only does this break the game flow, it contributes to the failure of the Journal at the one thing it’s there for: guiding the player through the process of completing quests. Divinity: Original Sin 2’s version of the Hinterlands Problem is one where an overabundance of narrative threads and an undercooked UI element crash into each other to cause a muddled, unfocused open world experience, and the game is the lesser for it. 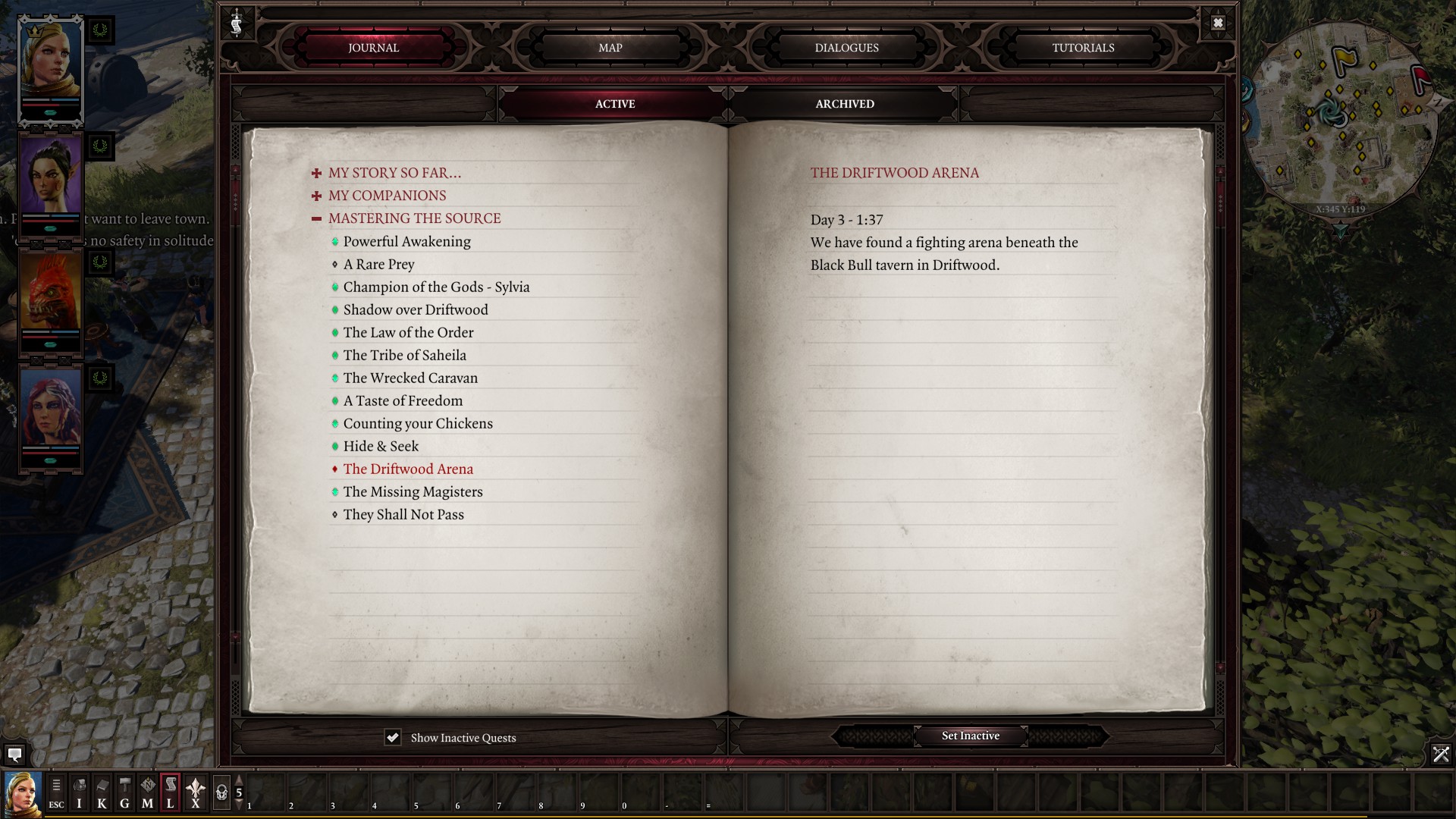 The Hinterlands Problem can be summed up as being a situation where too much optional content and a failure to provide a clear forward path for the player causes frustration, boredom, and a decrease in narrative cohesion. No game designer designs systems with these outcomes in mind: rather, the Hinterlands Problem is a common and natural byproduct of good-intentioned, if myopic, design. It’s the result of a failure to keep the bigger picture in mind, and, again, nobody does this on purpose. It just happens. To mitigate the chances of this happening, narrative designers and game designers must continually interrogate the means through which players will consume and advance through content; they must have open dialogue with systems and UI designers; and above all, they must play through and review each other’s content. Too much work in studios of all sizes takes place in isolation, and that status quo is the perfect breeding ground for problems like this.

Damon Reece is a narrative designer from Adelaide, Australia, passionate about open-world and modular storytelling. Damon prefers gender-neutral pronouns (they/them), and hates talking about themself in the third person. You can follow them on Twitter, or look at their portfolio if you're having trouble figuring out whether to take them seriously.