First impressions of the Oculus Rift HD Prototype. Does it feel like actually being there? How immersive is it? What is it good for?
Krystian Majewski
Blogger
August 30, 2013

Recently at GamesCom I was able to try the VR headset Oculus Rift for the first time. I was lucky enough to try the new HD Prototype. From what I understand, this is very close to the final product that should release in 2014. I played a couple of minutes of Hawken. Here are some of my impressions. 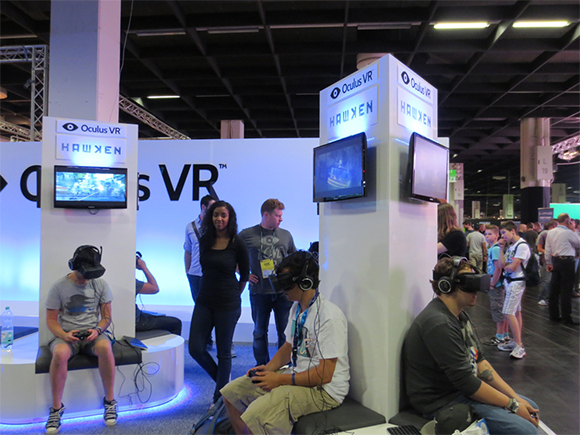 In some respects it was a sobering experience that de-mystified a lot of my preconceptions of Virtual Reality. In other ways I was still blown away by it. In any case, I think it is a fascinating and important device. So far, most of us have learned about Virtual Reality almost exclusively from Hollywood movies. The Oculus Rift represents a pallet cleanser and establishes a precedence to productively discuss the technology.

No. Which was the sobering part. There are multiple effects that will ensure that the user will never think that they are doing anything else than having a small LCD screen strapped to their face.

The good news is that it is very easily to get lost in the image. After a few minutes you get used to the artifacts and get lost in the game. Then again, that's kinda what happens with video games in general.

How immersive is it?

It is hard to say if the Rift feels more immersive than a regular screen simply because there is no way to measure immersiveness. However, there is one effect I and the two guys with me experienced which is certainly something a regular screen doesn't produce. Walking around in Hawken didn't feel exceptional. But then we engaged the jet pack. Holy smokes! Flying with the Rift is an incredible experience. It feels truly astonishing! There is a real feeling of actually lifting yourself into the sky, a real sense of height and depth. Even though there are no acceleration forces, some part of my brain was just completely fooled. So every time I turned off the jet pack and started falling, my stomach started to churn like in a roller coaster. I had serious inhibitions of letting myself fall all the way to the surface. I eventually did fall to the ground at a speed that would kill me in real life. It felt unsettling. Despite of all the technical imperfections, that feeling alone made all 3 of us walk away ecstatic.

So what is it good for?

This is the question I found most intriguing. Most people seem to want to use it for 3D shooters. That will do in the short term. However, there is an important thing that I realized: in order to make the Rift REALLY shine the game must reward you for being able to look around. You see, a regular shooter couples your walking direction with your viewing direction. So you always walk and shoot in the direction you look. This is not practical for the Rift as you would have troubles turning around 180°. Besides, in real life, you head and your body can rotate independently. The obvious solution is to uncouple the looking direction and the walking/shooting direction. You use the controller (or mouse) to move the cross-hair as regular. But additionally, you can move the camera away from the cross hair by turning your head. This works but it causes other problems. In practice, it is just so much easier to flick the analogue stick to look around rather than turn your entire head. So playing and FPS you will just end up staring straight ahead and moving the field of view with the controller as you are used to. This renders the whole head tracking functionality of the Rift completely useless and lessens the immersion. You just don't get the opportunity to experience how you head is embedded in the virtual world if you end up never moving it.

The Rift shines in games where the thing you control turns SLOWER than you can turn you head. These are basically any kinds of simulation games: flight simulators, spaceship simulators, racing games, truck simulators, etc. Any game, where you control some kind of vehicle that has some inertia to it. Hawken may be a Mech simulator, but it is just too fast for the Rift to be of use. You need something where there is an advantage in looking around.

The fact that simulation games often simulate an activity that is performed while sitting in a seat also helps reducing the dissonance. From our short experience with the Rift, games where you fly around have an additional advantage. I haven't witnessed any high-speed movements yet. They may also be impressive.

All in all, this and what I wrote yesterday suggests a very bright future for simulation games. Will we all be trucking with our Rifts? I guess we find out next year.