I've always loved jumping in games, falling and adjusting my landing to make it. Or swinging in the good Spider-Man games (2, Ultimate, Web of Shadows). Or drifting in Outrun. Crashing in Burnout. The list goes on. I've sat and considered the common feeling I get when playing these games. In my mind, I call it Fshhhhh, could also be described as a trigger-Whoa feeling. 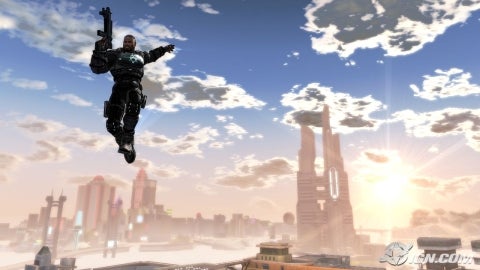 Essentially, the common element in all these mechanics is that they are triggered directly by the player who decides when to jump, swing, brake, explode, etc. But then something else happens. It's not a scripted event - the player is thrown into a potentially lengthy period where they can only control their avatar indirectly, as it is being affected by some element of the environment (often a physics model).

Back in the day, it wasn't that easy to have autonomous systems beyond your direct character control - processing power was limited, spent on enemies (direct challenges), objectives (tokens) and such. Having a fall pull you down in the Y axis faster than you can adjust the X already made for fun jumping in Mario.

Contemporary game jumps can be affected by complex physics, and calculate for friction, wind, etc. Even a tiny little game on the iPhone, Mr. Aahh!!, pulls this off well: all you do is tap the screen to release your character as he swings in order to land in the center of a platform with variable width. Land, he runs and swings again. Straight up arcade gameplay, getting more challenging with each swing. As far as I've played, wind and gravity come into play, and you can adjust the fall slightly by tilting the device. Great fun, and gets hard quickly. Made it to H-2 first time if I'm not mistaken. :)

Now, with little effort, we can incorporate solid autonomous systems like physics and world AI, and the result can be far more engaging, emergent and unpredictable. It can make for solid gameplay with incredible replay value. Take something like 'Splosion Man, where all you do is 'splode (sorry, couldn't help myself). By blowing yourself up, you're launched with a a simple physics engine, and can steer or explode again (up to 3 times). But if you factor in up to 4 co-op players, exploding barrels, the ability to regain explosion power by sliding down walls ... That's a lot of flying, and collective "Whoaaaa is he gonna make it???" moments.

I think this is also why Peggle is so madly successful and addictive - you launch that little ball and watch it bounce around the pegs with a pretty decent little physics model. If you've ever played Peggle with a few people watching, you know they'll draw their breaths in tense expectation, eyes tracking the ball's every movement, letting out a collective cheer when you hit that middle slot and the Ode to Joy (inspired sound design!) plays.

These games have the potential vast replayability since, like in real life, minute adjustments to these trigger activities can cause dramatically different outcomes.They are also immensely watchable, since people can intuitively understand the actions and all share a tension, us vs. the game world, if you will, once the initial trigger is activated. Will he hit that target vehicle with this lucky collision in Burnout crash mode? Can he slingshot round the skyscraper fast enough to catch that other building in Spider-man?

And then we've all had our laughs with emergence, from rag-dolls in ridiculous positions and glitchy spasms, to idiot AI staring at the wall one minute and beating on a team-mate the next. I think you can certainly say there are plenty of these trigger-Whoa moments in games with great sandbox AI like GTA, Bioshock - throwing in that one little grenade or shot and watching all hell break loose, often caught between explosions and enemies in the chaos you started. That's a little higher level, on a complex dynamic rather than mechanic level, but it still shares that core of activating and watching what unpredictability happens next, while trying to adjust your response.

I know that sometimes developers are tempted to take the easy way out - script/animate 2 or 3 jumps, for example, and make them bad-ass and cycle randomly when you jump, rather than worry about a full physics rig that can flap about in crazy, unpredictable and goofy ways.

But while there can certainly be the case for cinematic, well put together sequences, I tend to prefer these in games like Fahrenheit (Indigo Prophecy), where you don't expect or need to be given full physical control, just the ability to guide. If I'm playing an action game, I don't even much enjoy stylish, cinematic kills (for example) unless there's some kind of contextual control at least (not quick-time events), like in Assassin's Creed or Fable II.

The thing is, I see cinematic solutions as a crutch more often than not, flash added to stale mechanics, instead of a genuine exploration in new ways of doing things. I love that we're getting technology like Euphoria, which helps us get closer to the best of both worlds. Splicing in those bad-ass diving poses while falling in a rag-doll that protects its head is now possible, and this should ring a bell in gameplay designers' minds.

I think we as developers have no excuse not to keep driving the experience forward, and evolving the art. As a designer, I'm principally concerned with gameplay and feel, and think that if you succeed in establishing that feeling of suspense and drawn breath, adding the visual flair on top of it is a simple affair.

I'm only talking about a certain kind of experience, and not proclaiming it the only one, far from me. I love my beautifully blended, non-physics enabled animations in Dead or Alive, for example, and constantly appreciate how well they give me more back as soon as I learn to control them better. I need to play Flower on the PSN again, but in my memory it did a great job at simulating environmental feedback when there was none with the sound design and visual effects, like the blurring while moving faster or parting of blades of grass.

But I will say this, some of the most memorable mechanics for me are the ones that brought out this feeling, and it is very often to those games I will return after years and years, just for another jump, another run, another little joyride, 20 minutes of fluid, dynamic and flowing gameplay. I still remember how crazy and fun it was to ride those waves in Wave Race 64 and go flying on the larger ones, hoping to make the landing within bounds. In fact, I think I've made my point, and will go do a little racing now.