Moving at the Speed of Loot

A brief look into the reward structures of MMORPGs and how the speed at which they are administered influences their effectiveness.
Enrique Dryere
Blogger
September 26, 2009 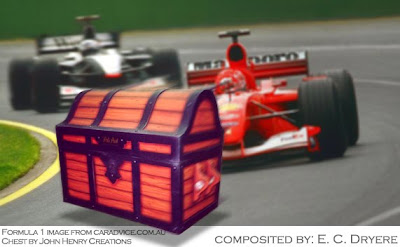 Unlike reality, rewards in MMORPGs closely follow the efforts that earned them. The strong link between effort and reward is one of the aspects of RPGs that makes them so addictive.

Most modern day jobs do not afford employees such a direct link between their efforts and rewards. Translating the pacing of an office job into caveman terms would go something like this: You begin to hunt a deer. After several years of hunting, you are allowed to see the deer in the distance. A decade rolls by and you've crept forward a few bushes. You fire your bow and twenty years later you finally find out whether you hit or missed. Sure there are some nuts and berries to be gathered along the way, but it may seem to the hunter that they happened upon them by chance as the snuck up on their prey.

MMORPG loot systems are designed to appeal to our basic hunter-gatherer instincts, making them well suited at reinforcing behavioral patterns. In Classical Conditioning, this relationship is normally measured between unconditioned stimulus and response, but the principles can be easily applied to effort (the conditioned stimulus), reward (unconditioned stimulus), and the understanding that specific efforts will be rewarded (conditioned response). The amount of time that elapses between effort and reward is referred to as a trace interval. This interval should be minimized in order to maximize behavioral reinforcement. Rare is the game that delays rewarding players for their efforts, but the main difference is that in RPGs rewards lead to increases in power.

Your character can go from a nameless peon to a legendary warrior in months. Today, the average lifespan is nearly 78 years in the US and times are not as rushed. Mercurial ascensions to power have become exceedingly rare in most disciplines. But just because we've risen above our humble, origins doesn't mean they're gone from our minds.

The Pace of Reward

It's not just about how closely rewards follow the effort that earned them, the pace at which these reward-effort units are distributed also matters a great deal. This metric is established according to how a player's efforts are bracketed. Each skill the player uses is rewarded with a sort of output, such as healing or damage. Every kill they make can earn them experience, faction, and/or loot. The same can be said about completing quests. When they accrue enough experience or faction, they are rewarded with access to new items and abilities. Herein lies the most flexible aspect of the reward structure, as level ups are arbitrary milestones. The player rarely has to complete a certain set of tasks to level up, they merely have to complete a certain number of tasks.

The most common arrangement in the modern MMO involves small skill-ups doled out between the all-important level ups. Skill-ups can help make players feel like they are continuously advancing as they work towards the next level, but don't expect them to jump for joy at messages like: You've Gained 1 Skill Point in Axes -- particularly when all this point typically does is increase their effectiveness by a fraction of a percent.

Consider a different approach in the partitioning of rewards: In Fallen Earth, players gain specialization points as they progress through portions of a level. In a system like this, the payoff is more continuous, yet the importance of the level up may be diminished.

Blizzard is well aware of the importance of pacing. Their constant attention to the rate of the leveling process has insured a fairly flat distribution of levels, showing no major drops at any point. This implies that players are not finding the gap between big payoffs, in this case levels, too large to overcome and that the rewards for leveling are sufficient motivation to continue.

Knowing that delay can lead to increased anticipation and greater satisfaction when the payoff is finally attained, the question becomes, how long is too long when withholding larger rewards from a player?

I, like many other MMOers, like to log into a game with a small, attainable goal in mind. There are many times in which gaining an entire level is simply not a viable option for the time allotted. I may only have time to complete a quest or two. If this effort is not properly rewarded, I may look back at the experience less favorably. And if I don't have another short-term goal to strive for, I may be less motivated to log in for a quick session.

Managing the interval between players' gaming sessions is vital, as longer gaps are indications that the player is about to quit. Giving them something to shoot for now, while working towards a greater goal can help drive their interest. It's not a coincidence that this sort of pacing -- small goals leading up to bigger goals -- closely adheres to the patterns of our natural state.

Humans have risen above the level of Pavlov's dog. We are intelligent beings, capable of overcoming our instincts, working diligently on projects that won't yield fruit for many years. Yet the power of appeals made to our baser selves can be hard to rebuke. We seem to take a measure of guilty pleasure in poking our heads out of our self-imposed cages every now and again.

The greatest bit of carnal entertainment in games may not be related to sex or violence, but rather the speed of loot.

This is a repost from my blog at MMOTower.blogspot.com