The design and implementation of Miiverse support in Lucadian Chronicles for Wii U
James Margaris
Blogger
January 21, 2015

The fundamental logic behind putting in support for Miiverse was this: I own a Wii U and I like Miiverse. And, based on anecdotal evidence, many other Wii U owners appreciate games that take advantage of features like Miiverse and Off-TV play. So spending time on it seemed like a rational business decision, as well as something I wanted to do for the non-business reasons of it being fun to work on and me personally wanting the game to support it.

In retrospect I think this logic was sound. Pre-release what little attention we got was often because of our Wii U feature support. Post-release a number of players (and reviewers) specifically mentioned that they were impressed with our Miiverse implementation, contrasting it positively to efforts from much larger companies. (Our Miiverse implementation is one of the most robust I'm aware of among non-Nintendo titles)

Our Miiverse implementation is part of the reason we have maintained a fairly active community, which is nice in a number of ways. It may have factored into us being featured on WaraWara Plaza for a while. (Not sure exactly what that is based on) A game with a dead community looks like a game nobody is interested in, and an active community lends the appearance of an enjoyable game. It's also important to remember that plenty of players who don't own a game will drop by the community to check it out and ask questions, including questions like "should I buy this?"

Our implementation of Miiverse posts is based on the principle that they work best (at least for a game like this) when posts appear without prompting. Rather than users actively choosing to read posts they naturally appear at semi-regular intervals. (With some user control on frequency) Appearing without prompt gives the impression of a lively community, a sense of fun and spontaneity, and as an added bonus removes UI work and clutter. In a previous iteration we had a button press required to read posts, which made reading posts more of a chore, especially when many posts contain just fun content rather than important information. In most games, including ours, posts work best when they appear as ambient extras.

Each node on our campaign map has a button that allows the user to post a comment specific to that challenge. This comment can be anything from an exact description of how to beat the challenge to a comment like "this is hard" or "I did it!" In practice this is how players tend to use the feature - asking or giving advice or expressing frustration / satisfaction with their results. 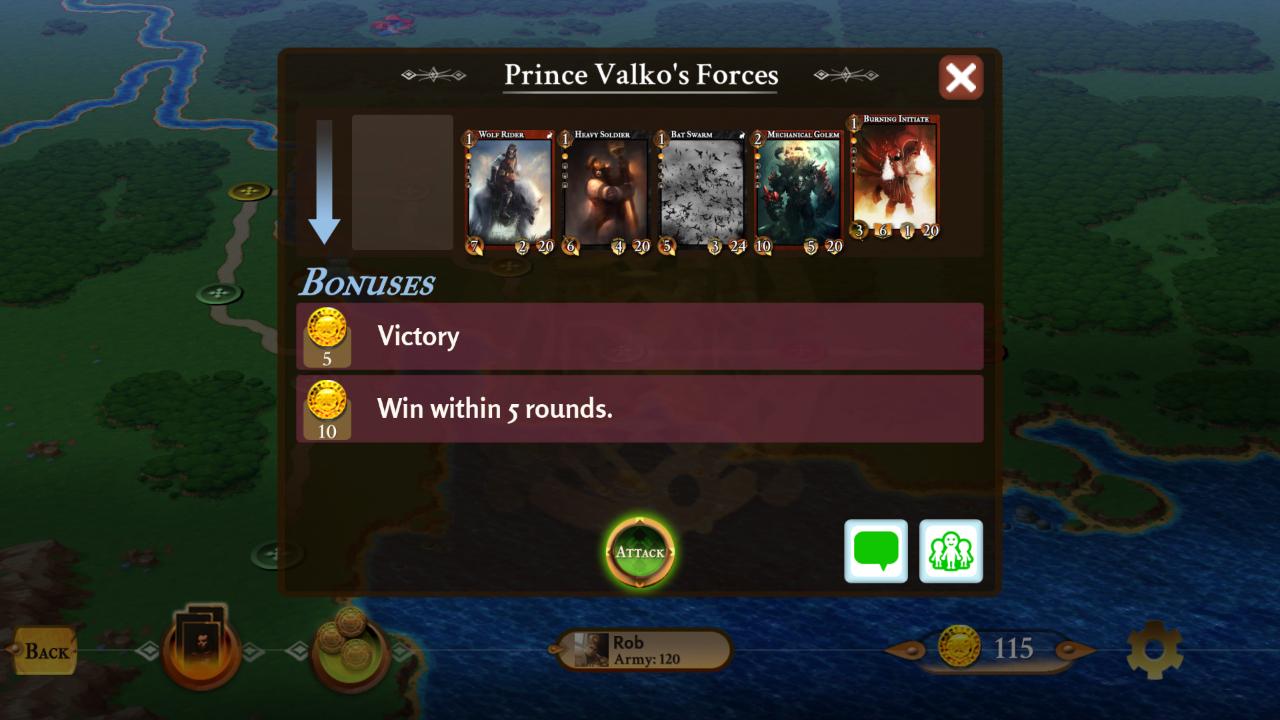 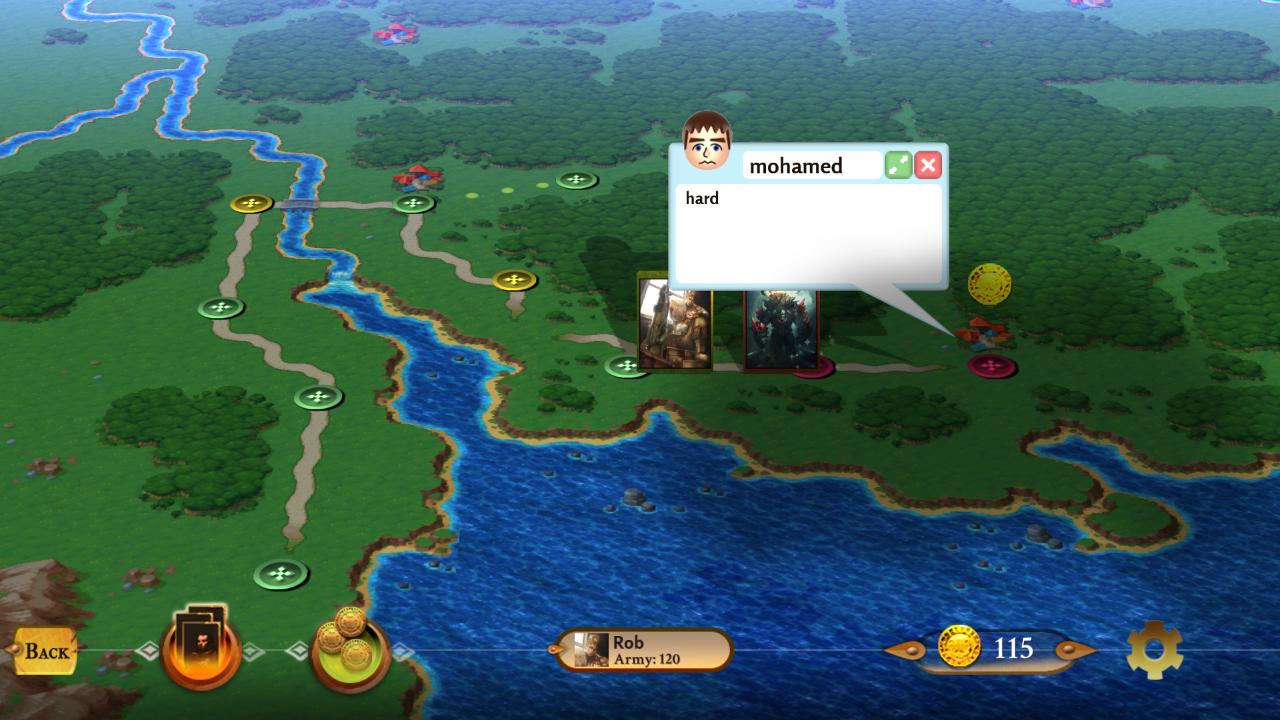 The other kind of posts in our game is card-specific posts. These are posts players make regarding individual cards, which then appear to other players in various card-related views. Players make these posts from the "Almanac" section of the game, which lists each card along with their artist and backstory. We restrict posting about cards to this one area mostly to avoid UI clutter on screens with more functionality. 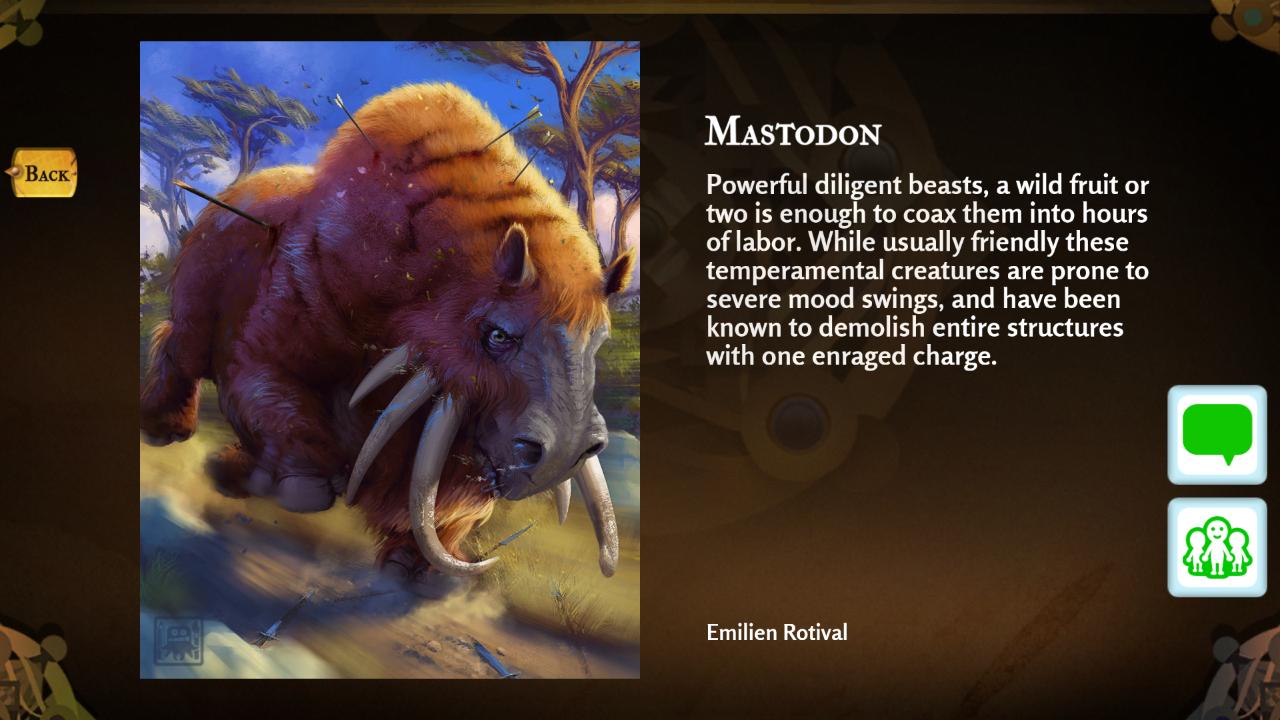 Temperamental and prone to mood swings - this also works as an "About the Author" section.

These posts show up in most places a player views their collection, including the dedicated collection view as well as screens that use the collection view, such as the screen where players create teams. 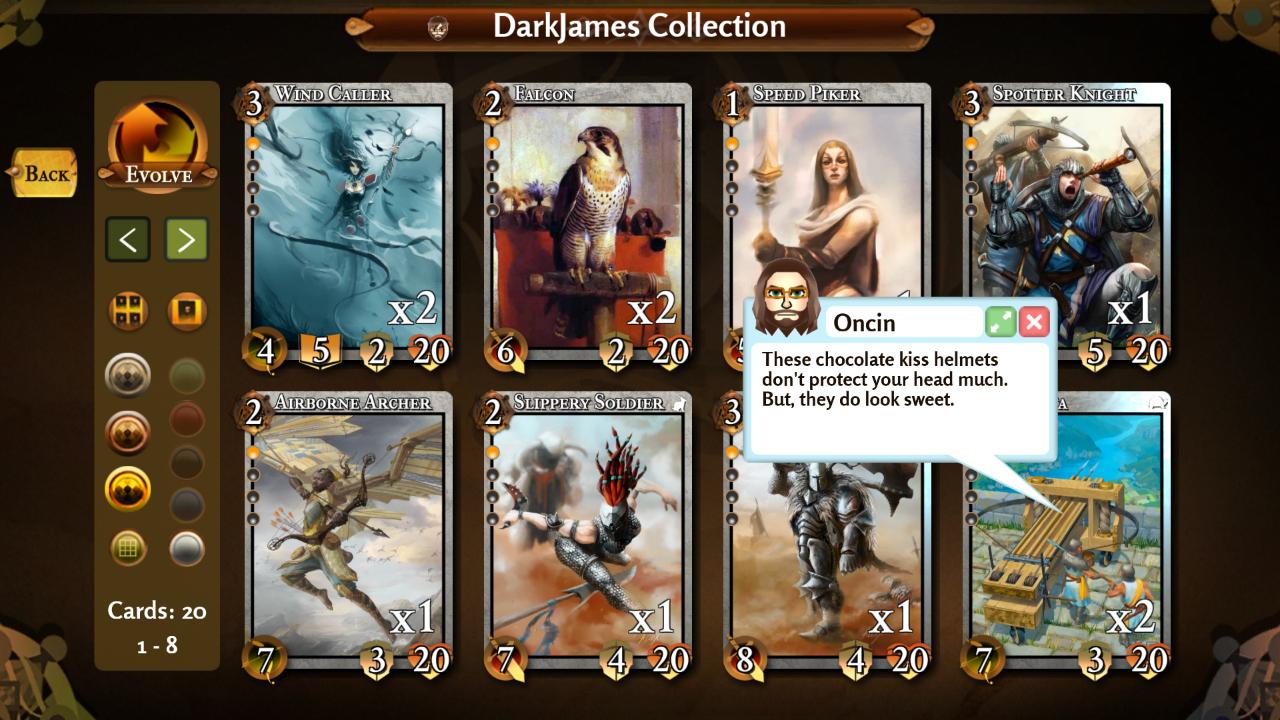 They also show up when a player opens a new pack of cards. In this case a post relevant to the cards is displayed immediately rather than lazily. This screen is dedicated to new cards so other players' thoughts on the cards are directly relevant rather than nice asides. In addition the screen isn't up for very long, making it a poor choice for lazy display. 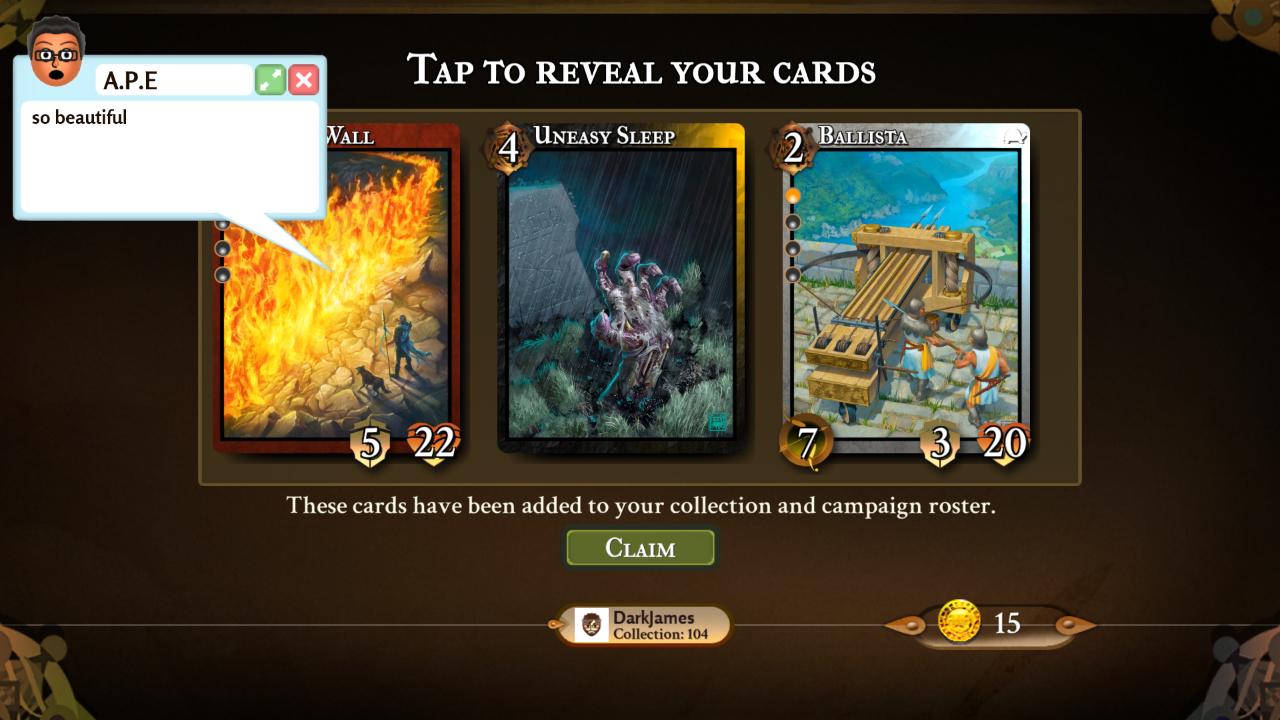 All of our Miiverse posts are expandable to a larger form. 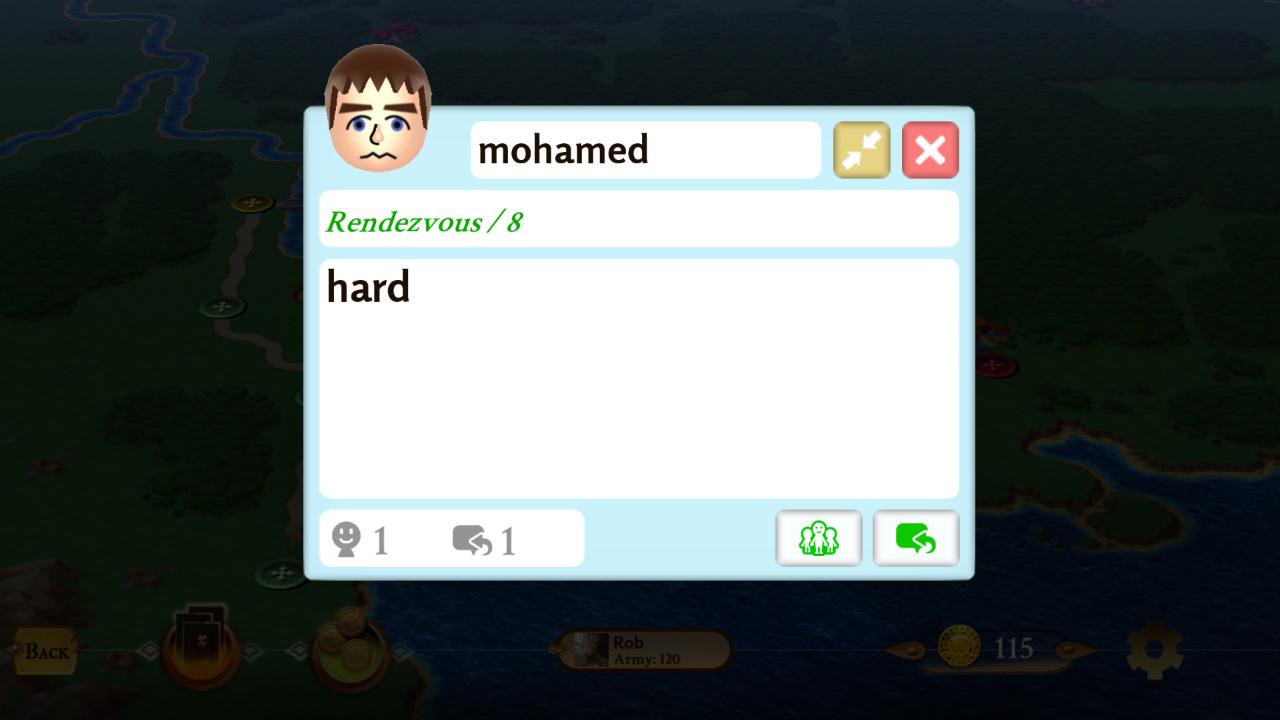 There are a few specific things about this larger post display worth mentioning:

As you can see from the included pictures we include Mii faces and names along with different expressions for the faces as indicated by the user. This greatly helps to personalize posts and make them feel like thoughts from real other users rather than random bon-mots.

Mii names can have a lot of crazy characters in them, so your font rendering better be able to handle a wide array of characters and deal with wide names as well. It's not uncommon for users to have Mii names made up solely of symbols. We display all of them and scale names that are too wide to fit normally.

Stamps are fun! We use stamps as achievements of sorts - players earn stamps by getting 100% on maps, winning multi-player contests, etc. Many games on Nintendo systems have their own semi-achievement implementations, like figurines in The Wonderful 101. Stamps are nice in that there's an easy way for players to show them off and they serve a utilitarian purpose. (Dressing up posts)

There's nothing particularly special about our stamps except that they are all programmer art. To create them we took our art, ran it through some filters (posterize to B/W while playing with brightness / contrast) then did a little cleanup by hand. 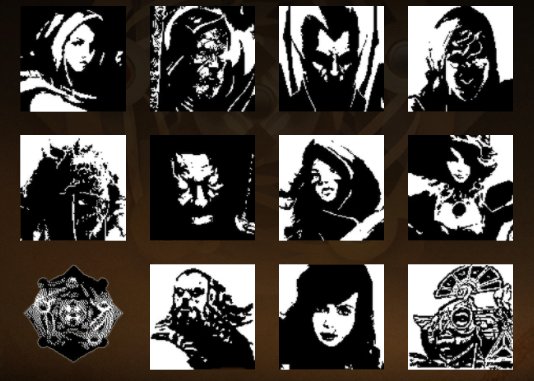 In some screenshots you may notice that there are two buttons - a button with a green thought bubble and a button with a standard Miiverse icon. The first button posts a comment, the second opens the full Miiverse side application to the given topic. That last aspect is confusing - what exactly that button does isn't obvious and the message that comes up asking the player if they want to launch the full Miiverse app doesn't clarify much. As an added bonus that message has some z-ordering problems and doesn't close before launching Miiverse. The end result of that is that a bunch of players got to the first node of the game, pressed that button, then posted something similar to this:

When users post from in game (rather than posting by launching Miiverse and including the automatically captured screenshot) we don't include a screenshot. The reasoning for this was as follows: you can only post at certain points and at those points everyone's screen is going to look the essentially same. If someone posts from the Almanac entry for "Falcon" the screenshot is always going to be of that screen.

While that logic makes some sense ultimately it would have been better to include the screenshot anyway. If someone wants to post a screenshot of a cool card and say "this cards is cool" they have to launch Miiverse to do it rather than doing it in-game, which means posts that should be tagged as specifically for a card aren't.

A potentially even better approach would be to (optionally) include an specialized image rather than a screenshot. In the Almanac view maybe display the card and text arranged and cropped to best fit the dimensions and to remove extraneous icons. When posting from a node make a custom graphic with the node name, the enemy team and the team you used to beat it. (If you just beat it.) One thing we didn't consider is that players may want to make posts with information not easily captured in a single, literal screenshot.

On the Wii U the two main differentiating platform features are the Wii U GamePad and Miiverse. Lack of Off-TV play in Wii U games is a definite negative, players will specifically ask if a game supports it and express disappointment if it doesn't. Lack of robust Miiverse support isn't quite on that level, but good Miiverse support is something players take note of. It resonates with players as a pre-release marketing bullet point, it's something they (and reviewers) appreciate while playing and it encourages Miiverse activity, which in turn makes a game look active and attractive.

In Lucadian Chronicles Miiverse support fit very naturally. There are discrete challenges and cards that players may want to attach thoughts to. The game is essentially turn-based, meaning there are many places we can pop up Miiverse posts without it being a distraction or obscuring important, real-time information. In particular the overhead map was an obvious candidate for posts, just as it is in Super Mario 3D World. In something like an FPS game it might be a little more challenging to find appropriate spots to display posts.

Tonally Miiverse posts tend to be light and playful and the plot in Lucadian Chronicles is fairly dark and serious, especially for an E10+ game. But rather than being at odds the Miiverse posts add some levity and help break up the unrelentingly dour mood.

One last thing I'll say about Miiverse is that players who use it tend to be friendly. On our Miiverse community there are at least 3 posts of the "Thank you for playing" end screen that say "no, thank you for making the game!" It's a nice change of pace if you're used to the tenor of message boards and social media. So a healthy Miiverse community can also be healthy for the mindset of the developer. Ultimately the reason I'm a game developer and not an investment banker is to make things people will enjoy - Miiverse is a great place for players to express enjoyment.

Putting time into Miiverse integration was well worth it for us and I'd encourage anyone making or porting a Wii U game to at least look into it and think about whether it's right for them.