Several weeks ago we began building a match game tool. We played and analyzed many match games to deconstruct their mechanics. In this article we share our findings.
Jonathan Bailey
Blogger
February 27, 2015 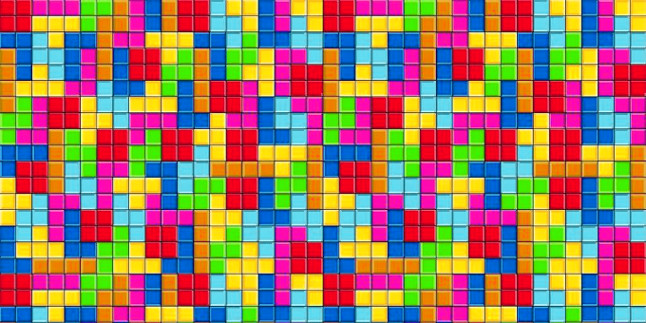 This article has been updated with contributions from Christopher Floyd, Robert Wahler, Lars Bull and Kevin Ryan. Please continue to share any contributions that you may have.

At Plinq we are obsessed with game rules.

Several weeks ago my colleague Herman Tulleken and I began building a match game tool. We played and analyzed many match games to deconstruct their mechanics. In this article we share our findings as part of a larger research and development project, which will later include an article on match game implementation patterns.

During our research we found many games with similar features to match games. By changing how we define a match rule it is possible to include a wider variety of games for which our scheme can be applied. However, we decided against including match rules that are not intuitively associated with match games to keep our task manageable. How far our definitions can be stretched is something we want to explore in the future.

For this document, we only include match games that are played on a grid, are 2D, and are on a single layer. Some 3D games (for instance Blockout) easily fall into our scheme if certain concepts are adapted for 3D.

In his paper Swap Adjacent Gems to Make Sets of Three, Jesper Juul defines matching tile games as “video games where the object of the player is to manipulate tiles on a grid in order to create matches” (We give a more precise definition below to suit our terminology and structure we use here.)

Juul says that one of the challenges that designers face is that casual gamers want to pick up and play these games immediately. There must be a level of familiarity without a steep learning curve. At the same time, games need to have enough uniqueness to stand out from the competition, and more importantly, enough to keep the player playing their game. Often these differences are subtle, such as Bejeweled introducing a timeless mode to its predecessors.

Because of this, the evolution of match games has occurred more incrementally than some other types of games, and it has resulted in many similar games (often labeled clones). More importantly for us, it makes match games easier to analyze than many other game genres.

Grid: A grid is a structured arrangement of cells. Games often use regular grids such as square grids and hexagonal grids.

Cell: A cell is a container that can be empty or full.

Tile: A tile is an object that can fill a cell. Cells cannot contain more than one tile. Except for during state transition animations, tiles are always inside exactly one cell, or completely outside the grid.

Block: A connected group of tiles that is manipulated as a unit. In many games blocks have only one tile each.

Matching tile game: a game where the object of the player is to manipulate blocks on a grid in order to create matches between tiles.

Match: Is a group of tiles that satisfy the game’s matching rules. The most common match rule is three connected tiles with the same color. Matches can contain tiles from more than one block, and matches need not contain all the tiles of a block.

Color: A property to distinguish tiles. This property is often an actual color, but can also be a shape, pattern or number. Not all tiles have a color in this sense.

Gravity: A force that moves all tiles in a certain direction.

Clear: A tile is cleared when it is removed from the game.

Combo: More than one simultaneous match. For example, if two tiles are swapped and this results in both tiles matching with other tiles (Bejeweled).

Cascades: Consecutive matches. For example, a player’s input results in an auto match, and the new or existing tiles fall into empty cells in such a way that another auto match occurs (Bejeweled Twist). Another example is a player's input fulfils a match condition, but a delay in the auto match allows further input/s from the player which may result in multiple consecutive matches (Tetris Attack).

We classify all match games into three main categories. These main groups capture the patterns in game loops and game goals, and affects the implementation of the rest of the game.

Elimination game: Tiles are matched to clear (or partly clear) a grid that doesn’t refill as the player plays. The grid can begin full or partly full (Chain Shot!).

Avoidance game: Tiles are matched to prevent a grid from becoming full or from tiles reaching an edge of the grid. The grid can begin empty or a partly full (Collapse!, Lines).

Farming game: Tiles are matched on a grid that stays full. Every time a match is made and tiles are cleared, new tiles are added, and the goal is to maximize or reach a certain level of a metric (Bejeweled).

A grid’s topology is how the cells are structured – which cells are connected. Commonly used grids include square (Bejeweled, Around the World in 80 Days), and hexagonal (Fractal, Same Hexagon) grids. A special case is 1D grids, which is a single line of cells, possibly curved (Zuma). 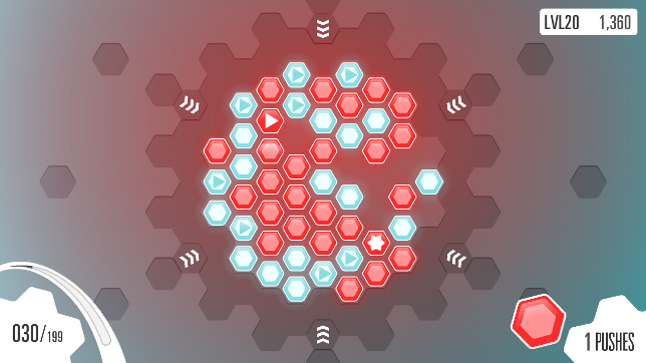 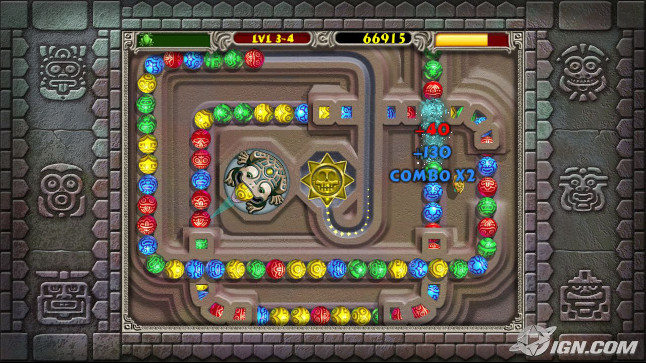 A large variety of sizes and shapes are used, both symmetrical and unsymmetrical. A commonly used size and shape for a grid in a match game is an 8×8 rectangle (Bejeweled 3, Puzzle Quest: Challenge of the Warlords). Grid sizes can change during a game (Uo Poko, Puzzle Bobble, Tetris Plus 2). 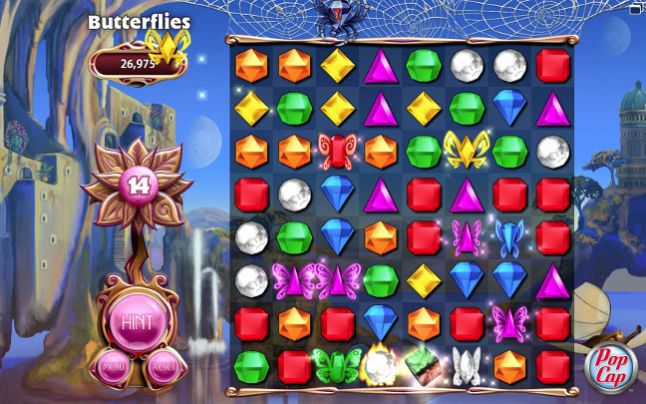 There are four different block structures. All but the first in this list are multi-tile blocks.

Clearing type: defines whether and how tiles are cleared.

Gravity properties: properties that define whether and how tiles are affected by gravity.

Game action: something that happens when the tile is cleared.

This classification may seem unintuitive from a design perspective, but it is useful for implementation.

Color tile: A tile that can be matched using matching rules that involve colors.

Wildcard: A tile that can be matched using matching rules that involve colors, except it can substitute any color.

Sinker: A tile that can be cleared by getting it to the bottom of the grid.

Activator: A tile that can be cleared by clicking on it.

Non-clearing tile: A tile that cannot be cleared.

Clearing tiles can have any number of game actions that are performed when the tiles are cleared. These actions include:

Sequence: Color tiles arranged in a sequence that is exploited for gameplay or scoring (Triple Town, Threes, Gems with Friends).

This section contains a few items marked with (*) for which we couldn’t find an example but for which we are sure one must exist. If you know of any examples, please share them in the comments.

Where blocks are spawned

The number of cells to spawn can be

When blocks are spawned

This is all the ways the player can change the game state. 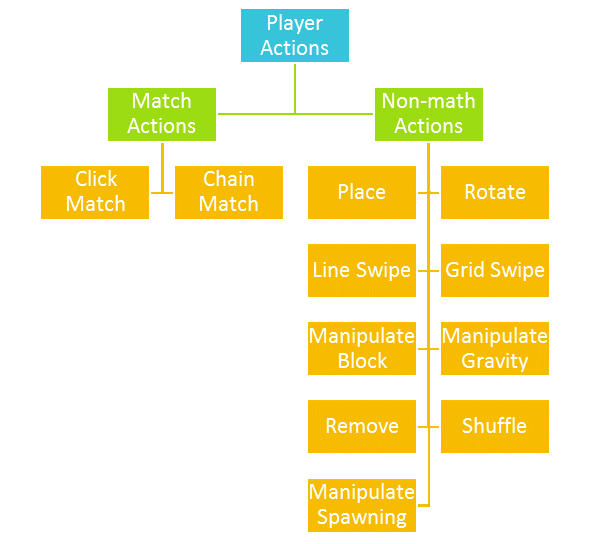 The player clicks on any tile in a matching group of tiles to clear those tiles (Collapse!, Same Hexagon).

The player clicks on each tile or drags over each tile in a matching group of tiles to clear those tiles. (Azkend, Jelly Splash, 4 Elements)

The player places a new block on the grid.

The player rotates tiles of two or more cells, usually by clicking or dragging over the cells. The most common use of this action is swapping – rotating two cells (Bejeweled 3). Other examples include rotating the tiles in three cells (Hexic) or four cells (Bejeweled Twist).

The player moves a whole line of tiles in the direction of the line. Lines are wrapped, so that tiles that go out the one end of the grid re-enters the grid on the opposite side (Chuzzle, Metronous).

The player swipes the whole grid, and all cells move as long as there is space available, or a match can be formed (Threes).

Block manipulation is defined by:

Changes in gravity include:

The player clicks on a tile to clear it.

The player moves some or all tiles into different randomly selected cells (Candy Crush Saga).

The player increases or decr