Rogue-like design has been becoming popular among mainstream design recently. Today's post discusses the challenge of making the player fail, and have them come back for more.
Josh Bycer
Blogger
November 08, 2012

Rogue-like design has been becoming popular among mainstream design recently. Today's post discusses the challenge of making the player fail, and have them come back for more.

Around the time before the release of X-Com Enemy Unknown, I started thinking about the original and what made it such a great game. While I was writing up a retrospective piece on the original X-Com I noticed one element that X-Com did that only a few games have managed to copied: it made failure part of the experience.

When you play a video game with a lives system or a story, there is usually a game over state: Where the player must restart until they get it right. Effectively, failure becomes a wall that the player must find a way around to continue making progress. But in X-Com, failure did not mean game over unless the player fails specific events (lost their bases, failed the final mission.)

Defining failure as part of the gameplay is something that not a lot of games can do and hurts the accessibility, but games that have managed to pull this off are some of the most gameplay rich titles around. The design of this kind of system requires the designer to understand some very specific points.

When designing a game around appealing to a wide audience, the designer wants as many people to play and enjoy the game as possible. That means giving concessions, altering difficulty and giving everyone who plays the game a chance to beat it...

These games have a different philosophy: The player is going to lose... a lot and they better like it.

One of the best ways to show improvement is to show failure. If something before was kicking your ass, there is nothing like coming back to it and conquering the challenge.

In X-Com the odds against the player were stacked as trying to hit a slot machine in Vegas. When you first started playing, the enemies had almost every advantage over the player: better guns, more accurate and in some cases they could outnumber the player's squad.

For the first few squad battles, having more than half your squad come back alive was considered a small miracle. One hit from an alien nine times out of ten, meant that person was going to die. Then the game added in stronger enemies and who can forget dealing with psychic attacks?

Games designed around Rogue like mechanics also put the player in the deep end in a matter of speaking. In Demon's Souls you start out equipped with very basic gear and you don't have the ability to level up your characters. Dark Souls drives the point home even more with the tagline on the box: “Prepare to Die." 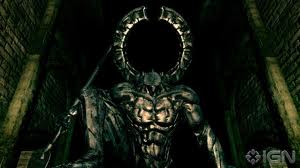 One of the many challenging enemies of Dark Souls

Now putting the player in the lion's den from the start is easy, but what separates a challenging game from one that is just plain frustrating requires something more.

In order for the player to not feel bad about failure, there must always be some kind of progress that the player can carry over. The basic example is simply knowledge about the game, which is a staple of any rogue-like.

At the start, the player has no knowledge of the rules of the world and the dangers awaiting them. As they play, they'll learn how to deal with certain enemies, traps to avoid, and positive situations to look for. Eventually the player will learn how to sway the randomness of the game to their favor.

The other side of the equation is carrying over in game progression, which can be a lot trickier to design. In X-Com even if the player loses several squads worth of people, they're still making progress on the research side of things. Unlocking useful items like the first aid kit, motion sensor and better armor. Meaning that even in failure, the player is still making progress.

Both Dark and Demons Souls has progression by allowing the player to raise their character's soul level which in turn improves their stats. This allows them to make permanent improvements to their character that won't disappear when they die.

There is also the act of unlocking shortcuts through the game's dungeons. While enemies respawn, any shortcuts or doors unlocked become permanent. For instance: Demon's Souls infamous stage 5-2, where the player must brave a poison swamp of difficult fights. If they can get past it, they can find a switch that opens a shortcut that takes the player past more than 75% of the level's challenges.

My personal favorite game that has used in game progression would have to be The Binding of Isaac. As in a rogue-like, when the player runs out of health the game is over and they'll have to start back at the first level. But as they play, the game will unlock new enemies, items and stages that will be factored into the randomization. 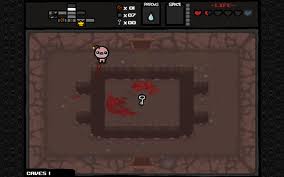 With both Isaac and X-Com, failure still rewards the player and eventually, the unlocked items will begin to turn the tide.

Many of the items in Isaac will flat out decimate the original lineup of enemies and even the odds against the unlocked ones.

While in X-Com, the more squaddies that survive thanks to your new gear mean better stats and allows the player to eventually go from being behind the arms race, to being even.

Another example that needs to be mentioned is from the Shiren the Wanderer series. Shiren is a rogue-like in the truest sense: turn based, death starts the player back at 0, and challenging enemies. The in game progression Shiren has is storage houses, where the player can preserve items for future play-throughs.

The trick is that the town of the game has a blacksmith that can improve one piece of gear per play through for a cost. What the player can do is take a weapon and on each play, improve it and then store it and repeat. Eventually that one weapon would become so powerful that it could kill any enemy in one hit. Now, this isn't the most optimal way of providing progression and balancing your game around it can be frustrating to the player base.

The driving point is that the player should always feel that they are improving at the game, whether that can be measured in miles or centimeters doesn't matter, as long as the player is making progress. If playing the game feels like slamming your head into a brick wall until it breaks, most people won't stick around.

Even though I enjoyed Ninja Gaiden Black for its extreme difficulty, which was about stacking the deck against the player. The game had no other means to progress other then getting past whatever you were stuck at. For many people, they stopped making progress and eventually quit playing. As NGB was designed from the start to be all about the player's skill determining victory and nothing else.

Some games design their progression around peaks and valleys: where the player will unlock something major rarely, and the rest of the time nothing. For instance the recently released rogue-like Faster Than Light: where new ships are unlocked via completing quests or earning specific achievements.

Each ship affects your play style dramatically, due to the different layouts and starting gear. But because only certain actions will unlock them, for some people it can be a long time before they'll be able to use anything other than the basic ship, or the ship that unlocks by beating the game once. 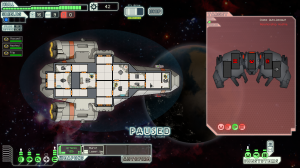 FTL offers less options of progression compared to Isaac. But each ship radically changes your strategies.

You could argue that the end game of Diablo 3 is another example due to the rate of finding pure upgrades drop.A level 63 item can offer a massive boost to your stats, but the chance of not only having one drop, but one that has your classes’ attributes in mind is very low.

Now that we have the difficulty and the concept of moving forward gone over, our last point is about not making progress... in the opposite direction.

The phrase: "the rich get richer and the poor get poorer" comes to mind with this point. With games designed around the rogue-like mechanics of replaying sections, there is one thing the designer needs to watch out. A lost cycle is where by dying; the player has no way to recoup what was lost and begins a downward spiral until they eventually lose.

Going back to X-Com while losing a battle once or twice is not going to cost the player the game, if someone is brand new to the game, it can be easy to just continuously lose. Eventually they won't have the money to restock and maintain their bases and have no choice but to start over.

In Shiren the Wanderer, after the player beats the main quest at least once, the series is known for having side dungeons unlock to test the player. Many of these dungeons absolutely demand that the player already has upgraded items before stepping in.

If the player dies and loses everything, they just can't restart the dungeon again. They'll have to spend hours gathering the equipment up again, and hope that they can do it this time.

While FTL doesn't let the player continue after losing a ship battle, there are plenty of situations that can happen that can force a losing cycle and prevent the player from beating the boss. Such as not finding any weapon or defense upgrades and not getting enough scrap to upgrade their ship. One wrong event such as losing a prized crew member, or getting attacked in a weaken state can be it for your crew.

Failure is not something that we want to experience, but is still a necessary part of life. Making it part of a product that is designed around entertainment seems like a crazy notion, but when it's done right, you can have one amazing game. If after ten deaths in a row, the player is still going back for more, you know that you did something right. 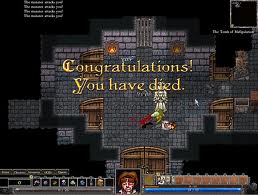 The typical event in a Dungeons of Dredmor play.

Originally posted from my site: Game-Wisdom