In this installment we compare two boss levels and how one succeeds at teaching the player the use of the level's key power-up while the other fails and why.
Louis-Nicolas Dozois
Blogger
September 06, 2017 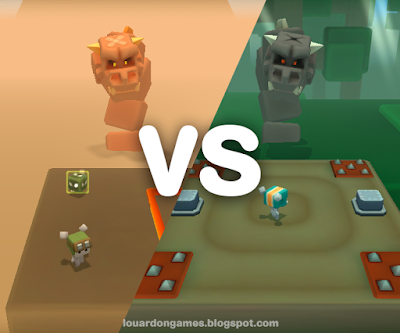 Boss levels should be a cinematic way to test your player's skill. But what happens when your boss level is too hard and its goals unclear? This Lessons From Suzy Cube article will compare the design of two boss levels from the game in order to illustrate the difference between a level which adequately uses behaviour reinforcement to prepare players for the battle ahead and one which fails to do so.

I would like to preface this article with a notice that Suzy Cube is (at the time of this writing) still in development and that some details touched upon in this article may change before release. The lesson as a whole, however, still holds true.

Cut From the Same Cloth

The World 2 and World 4 boss fights, are designed to require the use of power-ups in order to defeat the boss. The Double Jump and Ground Pound, respectively. So, unlike the other boss fights, onus is on players to attack the boss or create an opening rather than simply waiting for such an opening to present itself. This creates a different design challenge as players need to be made to realize they need to leverage the abilities bestowed by the power-up found in the level to defeat the boss.

So, in order to ensure that players can puzzle out the tactics necessary for completing the boss encounter, it's important that we reinforce the behaviour necessary for defeating the boss. Examples must be used throughout the level leading up to the final fight to ensure players realize what is asked of them when face to face with the enemy.

Level 2-B: Doing it Poorly

This level does it poorly. For that reason, what I'm presenting here is likely to be very different to what will find its way into the final product. But before I tear the level apart to rebuild it, let's use it as a perfect example of poor behaviour reinforcement.

As previously mentioned, the boss fight revolves around having to use the Double Jump power-up to defeat the boss. This means the boss never brings its head down to the player's level forcing the player to, insead, Double Jump onto the boss' head to deal damage.

Here is a view of the entirety of Level 2-B leading up to the boss fight. Players must climb the tower to face off against their foe at the top, all the while being chased by a rising plane of deadly quicksand. Nowhere along this entire tower climb do players encounter a Double Jump power-up. In fact, the tight placement of the dark moving platforms makes it very likely that players will continuously be bumping their heads when attempting to use the Double Jump to aid in their ascent.

Only at the very top of the tower, will players find the very power-up needed during the fight.

Notice, also, that there is nothing about the boss' placement or body language which beckons players to even try to jump on its head. This is the enemy's regular idle pose. The previous boss encounter has taught players, if anything, that it is a bad time to try and attack the boss.

Ultimately, the level is much too difficult as the game's second boss level and does an extremely poor job of educating the player as to how to defeat the boss at the end of it.

Level 4-B: Doing it Well

First, there's the level itself. Unlike Level 2-B, Level 4-B misses no opportunity to both give, and require the use of the Ground Pound power-up. Players are constantly forced to use the power-up to progress.

The start of the level has players facing a gift box containing the Ground Pound power-up followed by a metal switch which must be pounded to activate a bridge of floating blocks to get across a large gap.

Use of the Ground Pound ability is required frequently as players climb up to meet their opponent. There are jump pads which lack the force to boost players as high as they need to go without the extra oomph afforded by pounding onto them, rock blocks which can be broken open to reveal goodies and several uses of the Ground Pound switches to enable progress up the tower.

Most important amongst these is probably the wall of explosives, which players must clear by activating one of the side cannons using one of a pair of metal Ground Pound switches.

This situation is meant to mirror that which faces players during the boss fight.

By this point, players will, hopefully, have concluded that launching rockets using the Ground Pound switches will be an important part of the fight.

Indeed, the rockets play a vital role in the boss fight since a direct hit from one of the rockets will cause the boss to fall to the center platform, vulnerable to attack.

In order to damage the boss, players are then asked to, once again, use the Ground Pound as the boss' rocky head is impervious to simply being jumped onto. This fact is reinforced throughout the encounter as the boss summons Rock Skull enemies who must also be Ground Pounded to be defeated. Contrary to the situation in Level 2-B, it's obvious when the boss is open to attack. There is little doubt as it lays their, eyes spinning, as to whether it is vulnerable or not.

Level 2-B isn't a complete disaster, of course. Making liberal use of shockwave style attacks during the boss fight reinforces the use of the Double Jump ability, for instance. But it is much too difficult and in order to make it the best it can be, several shortcomings must be addressed.

Nothing about the level currently educates players about having to make use of a power-up to defeat the boss. The Double Jump power-up must be introduced at the very beginning of the level and be central to progressing up to the boss fight. Moreover, the boss' body language does not beckon players to try to jump on its head using the Double Jump, and even doing so successfully almost feels like a glitch because the margins for landing the hit are so tight. The boss itself should adopt a different pose, making itself more available to attack periodically to entice players to attempt the manoeuvre.

This has been a real-world lesson in behaviour reinforcement. In the case of these two boss fights, which stray farther from the formula established by other boss fights in the game, it's imperative that the technique necessary for defeating the boss (use of a particular power-up) be required and reinforced throughout the entire level leading up to the fight.

So when you are faced with a similar design challenge and need to teach your players to do things a little differently, think of those situations leading up to the trouble spot and how they can serve to reinforce the new behaviour you are demanding of your player.


Have you ever come across really great examples of behaviour reinforcement in one of your favourite games? If so, share it in the comments.