Learn how to make turn-based battles from Persona 5

Let's analyze the Persona 5 combat system and how it's versatility enable the game to keep every battles fresh and fun even after 100+ hours of gameplay.
Michele Papucci
Blogger
August 22, 2017

The last entry in the Shin Megami Tensei series has been received by the audience as one of the best RPGs ever made and for good reasons. In this article, I want to give you an analysis on what I think is the true strength of the Persona 5 combat system. For those who are new to the series I will briefly describe how things works to make sure that everyone will understand.

Let’s keep things short: In Persona 5 you have a third person visual of your character in the overworld, around you there are Shadow Creature you can battle with: After having physically touched them a turn based combat start. You actually have 3 ways to trigger a combat with a Creature: If you do a sneak attack and ambush the enemy the fight will start with a full extra turn for your four-member party. If the enemy sneak behind you and they trigger the fight then they will have an extra full turn. Last but not least If you attack the enemy without making an ambush, the battle will start normally without any extra turns. 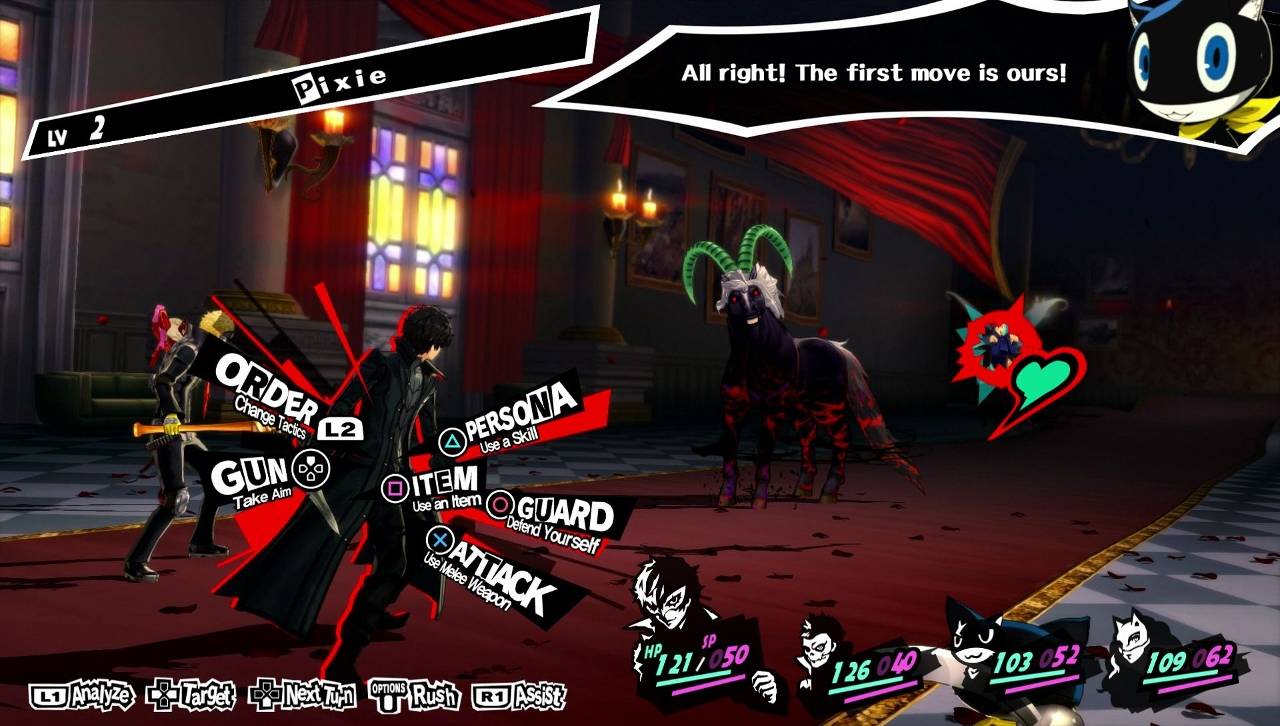 After any possible extra turns the character (yours and enemy’s) will act in order by their agility stat. Usually during your turn you will have to choose between different type of actions. The basics are: Defend, Attack, Shoot and Persona. The first will put you in a defend state which will decrease the next damage you’ll suffer. Attack will be a simple physical attack and shoot will be a ranged attack with your gun. Persona will summon out your Stand Persona and make you cast spells which will do different types of damage and effects at the cost of some of your SP (Basically, Mana) or HP.

For now, everything seems pretty basics, after all it’s just the usual RPG combat system, well, it’s not over.

As any other RPGs, every enemy (and party member) will have some weaknesses to certain type of damage and how Persona manage its weaknesses system is what does the trick: If a character hit another character with an attack they are weak to, the attacker will get another entire turn and the attacked will fall to the ground. This extra-turn feature is known as “One More”.

When every enemy party members have fallen to the ground your party can do a special move called “All-out attack” that will do a heavy amount of damage to all the enemies. Let’s talk about how this last two mechanics are great. Having a full extra turn means that after making an enemy fall down you can continue to hit the other standing enemy weaknesses until all the enemy are down. And, after that, trigger an All Out Attack to finish them off.

Right now, if you haven’t played the game, you may think that this will make the combat really easy but that is not quite true.

First of all, enemy group are formed by different type of enemies with different weaknesses and except for the protagonist, the other party members have only one elemental type of attack. What this means is that if you want to make all the enemy fall to the ground you will have to cycle through your party member in various turn to actually perform an All Out Attack. What this does is that if an enemy you made fall act before your next party member he will actually stand up making your effort useless. That’s why ambushing enemy is key, having a full turn for your party actually means you can easily wipe out all the enemy leaving them with no chance to win. (There is a better way to do it which is a special ability known as “Baton Pass” which allow you to change character that is performing the One More turn you gained, to unlock this special ability though you have to perform extra activity).

The Ambush and the One More mechanics, combined with the special All Out Attack create a dynamic and quick process of defeating weak enemies, but to actually perform it you’ll need to discover enemies’ weaknesses through a try and error process.

All of this mechanics, except the All Out Attack, can also be used by the enemies, making how you trigger the fight just as important as the fight itself, because being Ambushed by the enemies can by all means be your party’s death.

Being able to speed up the exploration and the fights by learning the enemies is a really good idea because when the enemies start to look old and battling them begin to be just annoying you can basically obliterate them and continue your exploration.

What’s also great about this system is that none of this mechanics ruin or heavily speed up the great boss fights the game has to offer. While you can pretty much destroy every weak enemy you come across, mini bosses and boss fights are another story.

When you encounter a boss fight you probably will see a cutscene and then the battle, which means you can’t ambush a boss. The boss itself will have little weakness or none, making the “One More” mechanic very hard to use. Killing a boss will be an hard task and you’ll have to learn his moves and tactics to beat it. You will also need to prepare your party carefully because bosses often use special status move which can destroy your tactics. In the end the boss fights are long and epic as they should be.

So, what I think is the real key to any good combat system for a turn-based rpg is its adaptability to both be quick enough to make fight weak enemies fun and engaging and at the same time makes boss fight long and epic.

The Persona 5 System allows you to have fun with the weak enemies trying to understand how to beat them. Once you’ve done that, you’ll lose interest in those enemies and your knowledge and the games’ mechanics allow you to basically skip them if you are care enough to sneak behind them (Which is not that hard and super fan thanks to the fantastic rogue-ish moves you have in the overworld).Once you come across a boss fight the process of learning starts over but in a much bigger epic style in which you’ll come across various boss phases, cutscenes, dialogues and so on making the combat system very adaptable and fun through the entire game.

If you haven’t played Persona and you like turn-based RPGs then go play. It’s a great game. I hope you’ve liked my article.