Writer's Room is a well-known technique used in movies, series, and other TV production, but just recently it started being applied to games. This post aims to convert some of it to a game's production.
Gabriel Padinha
Blogger
March 04, 2021

For a while, I've been conducting writer's room in games I participate in from the early production phase that contains some sort of narrative in its design. When we talk about narrative and writer's room, it's easy to think that we only deal with complex stories and key points on stories, but the truth is that most stories I've worked on having as the central point a fun and fluid gameplay more than just the story.

In this way, when we think about narrative, we do not necessarily think about tracing every story piece of a great narrative game such as Detroit: Become Human, but rather some story pillars that rule the world, even though sometimes they are not even presented to players. This is a way to also lead artistic, interface, gameplay, and other aspects that compose a game.

A central point is that not every game has stories with a well-thought script and complex storylines, but even though still use some techniques that fill the world you're gonna work and develop for the next months or years can be valid in a macro view.

Tin & Kuna is a game 3D platform that despite having a not complex storyline whatsoever, made great use of narrative directions and decisions made during the early stages of development in its art style and core mechanics.

But after wall, what is a Writer's Room?

It is a technique applied for years in the industry of cinema, where screenwriters gather around a round table to give their opinion on, the script for a film, series, or other media. At this meeting, everyone has a voice to suggest anything to the heart of the narrative, which is then filtered by the most experienced writers or the creator of the script room, if it is a smaller team. Despite being very widespread in the cinema universe and being used for decades, it is a relatively new technique in the world of games and only began to be applied as they evolved in terms of plot and script.

At Black River Studios, our writer's rooms were usually open to people on the team who are willing to participate and are usually led by a Game Designer or, in the absence of one, a UX Designer. This designer will be responsible for elaborating the dynamics, driving the rhythm of the script room, and finally, compiling the ideas, filtering them, drawing insights, and deciding what goes into the main story.

Because at Black River Studios we worked with sub-teams spread into multiple projects happening at the same time, the person responsible for creating the Writers Room can (and usually does) call people from another team to participate in the dynamic. This is very helpful since it can bring another view about the story that those who are already biased by knowing the theme and pillars of the game most times have.

Looks like a Writer's Room (in fact it is, it's Breaking Bad writer's room), but it's almost like this that we organize ourselves to make our owns.

Depending on the depth of the story you want to tell, multiple sessions may be necessary, so before you start to design your writer's room, it is important to reflect and decide which questions you want to answer with that specific session. The recommendation is that, if more than one session is hosted, they happen increasingly, in a way that a script room creates material so that the next one can use it, this way you can create links between one part and another of your history, allowing your world and your script to be deeper and tied together.

Generally, your goal will start with something like defining the universe where your game takes place, or the main characteristics of your character, or even, if the focus is on telling how a great villain or threat was defeated, what is that threat and why it’s so important to the game’s script.

When your goal is set, it's time for you to start researching some references that are valid for you to start working out how the script room can be conducted so that good answers flow naturally and the questions you want to answer with that session are in fact answered. 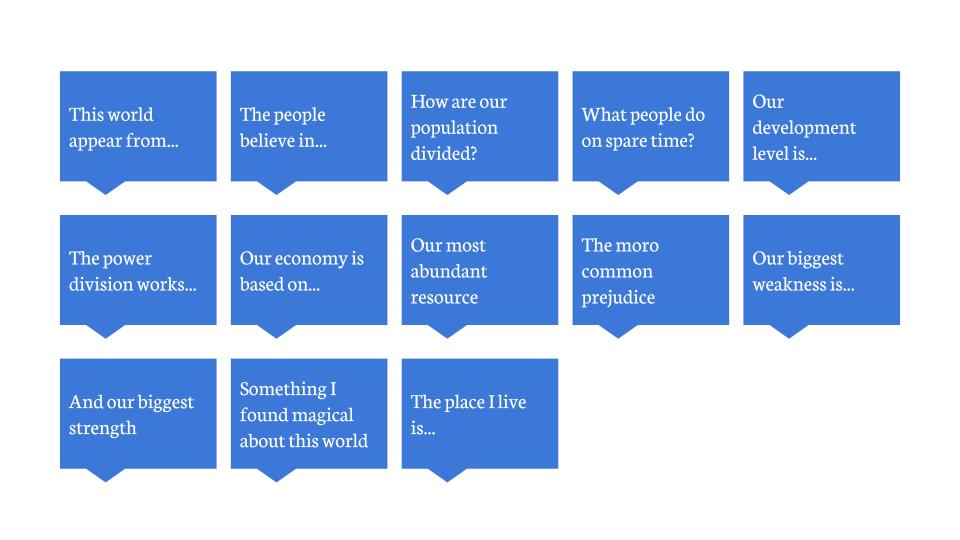 In this session, our goal was to define how the game world would work. For greater immersion, all questions had to be answered in the first person, so that it would be easier to embrace such a world as ours.

Despite having its own techniques and a much clearer objective, a script room is still a brainstorming, with ideas being presented all the time by those involved and with a mediator who will have the job of filtering them more evening.

Besides, it is good to research some dynamics that match the goal you defined earlier, remember that no matter how good the dynamic seems, if it does not serve to achieve your goal, it was worthless. This site contains a huge list of brainstorm techniques: https://status.net/articles/brainstorming-tools-techniques/

Define a direction before the session takes place

It's hard to come up with ideas totally out of the blue, but if people have a theme or piece of stuff to work on, then it`s much easier.

Some people may have trouble coming up with ideas out of the blue. In one of the sessions that I conducted, I looked for some references that already had to do with the world that we had idealized on top and compiled in order to create a summary and write a short story, this served for everyone to arrive with a clear idea of what direction they had to aim, even if the world was poorly defined.

This was an experimental technique that I tested and it worked very well! People, when part of the same group, naturally tend to walk in the same direction. As ideas come up, they all tend to go to the same place. Dividing people into two groups not only makes each group take different paths, but also creates debate.

For two groups, I'm not saying to put in two corners of the room, but rather choosing who is “Machine” and who is “Human”, for example, so that people will give answers about the world from that point of view.

For this division, any two antagonistic groups (or those that are not close) will serve Herbivores and Carnivores, Machines and Humans, Poor and Rich. Just remember that these two groups have to have something to do with the theme already pre-established for your story.

Make the rules of the session very clear. 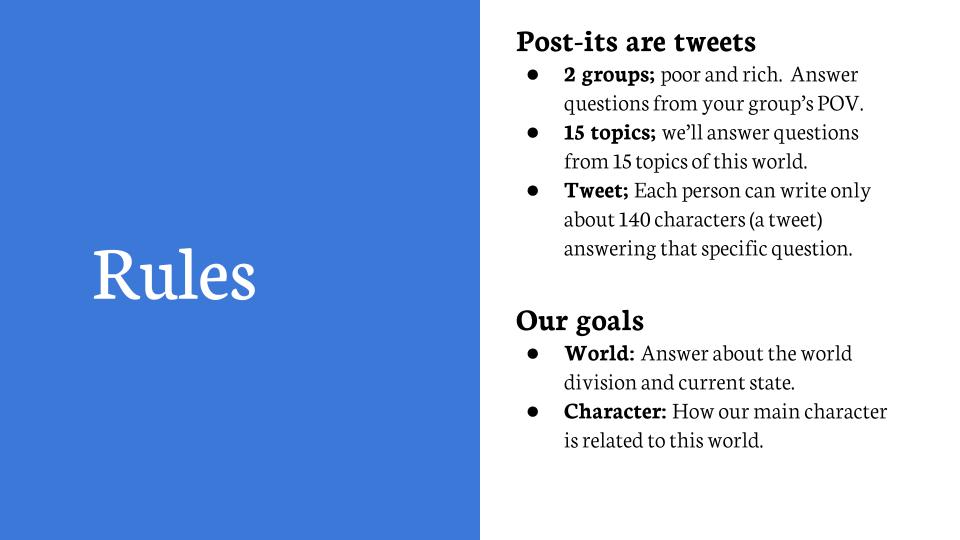 This was the initial slide of our brainstorm session, containing all rules and goals we wanted to achieve in those few hours.

Most of your work happens after the session, when you find yourself with a tangle of post-its and, depending on how many people you have invited, hundreds of ideas.

Compiling ideas is your job, put them all on a spreadsheet that crosses questions and groups, mark the most interesting ones, analyze those that, despite being not so fitting, have potential to turn into something good, cross ideas with each other and see if they complement each other (or create interesting disparities for your script) and take the opportunity to gain insights and create new things.

From here, ideas will emerge and you can share them with the team.

Check if those ideas make you change your view from that narrative point and if it's necessary to have an additional session. In the end, take time to play with the ideas and use them in the best possible way to take your script, world, and characters to a place that makes sense for the story you want to tell.