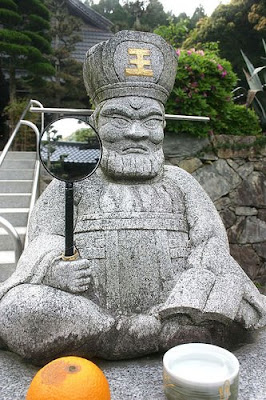 Wikipedia has a decent summary of Kohlberg's stages, and a more in-depth one is available here, but the basics can be summarized as consisting of three levels with two stages in each (this is game-ish already!).

The first level is "Pre-Conventional Reasoning," with stage one being "obedience and punishment orientation." Moral reasoning at this stage really consists only of "what is good is that which will not get me punished." Stage two is "self-interest orientation."

Level two is "Conventional Reasoning," with stage three being "interpersonal accord and conformity." At this stage, morality is evaluated based on the impact decisions will have on relationships with others. Stage four is "authority and social-order maintaining orientation," where individuals obey laws and social conventions because they understand their importance in maintaining a functional society. Here morality is largely dictated by an outside force and viewed as relatively unchanging.

Level three, "Post-Conventional Reasoning," hosts stage five, which is "social contract orientation." Here, morality is recognized as general principles agreed upon to promote individual and community welfare. Those that lose their utility can be changed or removed. Stage six is "universal ethical principles," where morality is reasoned through a framework of abstract moral principles, and is somewhat Kantian in nature.

The interesting thing about Kohlberg's stages is he found everyone begins at stage one and move through stages (none are skipped) as they age until stopping at one of the stages. Kohlberg studied a set of subjects over 20 years and at the end of the experiment, about 30% were reasoning at stage 3, about 60% at stage four and about 10% at stage 5. Other research has confirmed a similar distribution amongst a larger sample group.

So, with that lengthy preface complete, what does this have to do with games? Kohlberg believed that development of moral reasoning depended upon a) general cognitive maturation and b) opportunities to confront moral issues, especially when discussing them with someone at a higher stage of reasoning.

Games, I believe, can serve as a springboard for the latter in a way other media cannot. Discussing why a character in a film made a decision and theorizing about alternatives is one thing. But discussing why I made a different decision from you and examining our relative consequences is something else entirely.

Most "ethical" decisions in games are truly ludicrous in scope. When the decision is between driving a bus full of school children to the ice cream shop or locking the doors and setting the bus on fire, the rightness of this decision is obvious to anyone at any stage of moral reasoning.

If we want to promote more sophisticated moral reasoning in games, the very first thing we have to do is jettison these absurd "dilemmas." While the intent may be to heighten drama by raising the stakes, it really has the opposite effect and deflates any chance of substantive thoughtful reasoning.

James Portnow wrote a great opinion piece on Gamasutra last week about moral decisions in games. One of his recommendations is losing the universal good/evil slider and I wholeheartedly agree. What this does is trap players at the 4th stage of moral reasoning (at best), where morality is derived entirely from an external source and wholly static. By creating distinct moral relationships with different groups, players have the ability to explore different moral frameworks.

If we believe games have the ability to teach and inform, and I believe that they do, we should seek out and embrace opportunities to post interesting questions to players. Especially when we can do so in ways that other media cannot.

But the types of conversations games ask players to have are shallow and based on unsophisticated  moral reasoning. By creating more substantive decisions, we won't just be creating more compelling stories, we might actually be encouraging moral development in some players.

I don't agree with the sentiment that games universally infantilize players, but in this regard, it's pretty hard to dispute that the moral reasoning games ask players to use is that of, at best, teenagers. Kohlberg's stages give us pretty clear evidence for the benefits of posing moral questions with more depth and nuance. We have an opportunity to make a real difference here. All we have to do is seize it.