Here, I will try to describe the key features of stealth games that I found during my last 2 years of work...
Ludovic Servat
Blogger
August 26, 2020

The meaning of infiltration in stealth games may vary according to the people and their culture.
Here, I will try to describe the key features that I found while I was analyzing stealth games to work on my own stealth game Volt patrol.

A stealth game doesn’t need every feature I will talk about. That being said, I did my best to include a maximum of stealth game types and that is why I did not go into detailed cases. This overview will only be about stealth games.

We can define infiltration as the art of accessing the inaccessible through imperceptible, indirect, inconspicuous and unpunished ways. 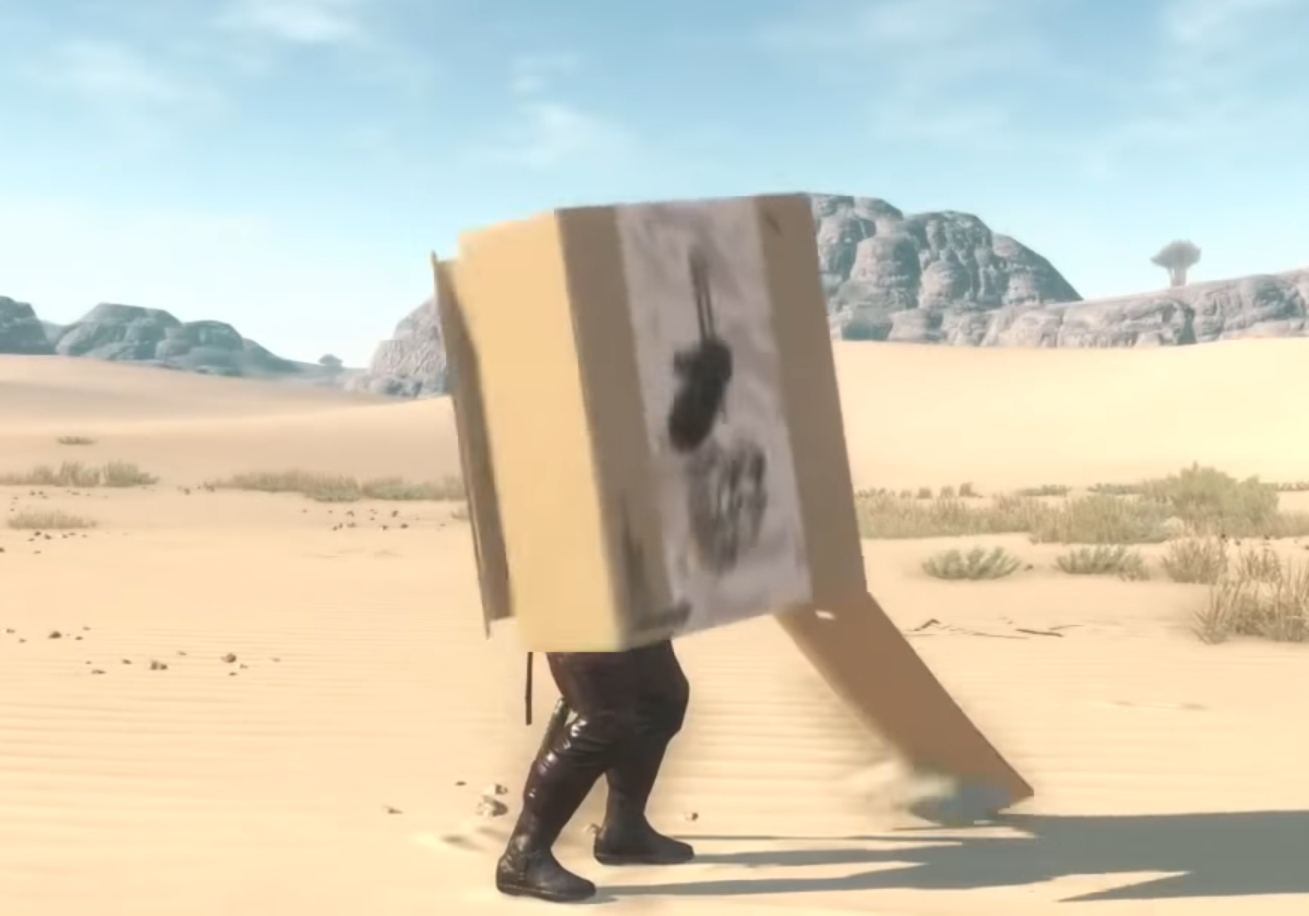 Infiltration can be used to:

The fundamental context pushing the player to progress in infiltration mode is the need to access, by indirect ways, what is unreachable by the most direct route.

This need emerges from the balance of power between the avatar played (the player) and the surveillance (the game) creating the dynamics of progression.

The balance of power can be shown in 3 different ways creating these dynamics:

Advantage to the player:
When the player embodies the most qualified avatar of the game, the skills they possess help to access any objective despite the constraints that stopped any other attempt. They embody the only solution to the game’s problem. The player may take safe alternatives accesses and thus feel satisfied to stealthily trick the surveillance.

In that context, they are often disadvantaged when confronting several opponents but can handle any lonely surveillance. 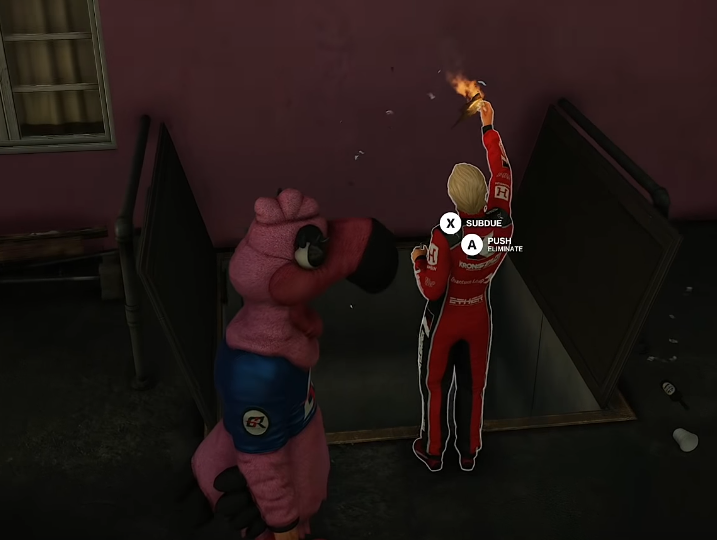 Also, with a lot of skills, the player has a wide set of options to operate and can feel at ease and empowered to act according to their needs and desires.

Here, the dynamic highlights the mastering of the avatar skills.

Advantage to the Surveillance:
When the surveillance is implacable, the player is put in a context where the skills possessed do not allow them to face it. Most of the time, if the surveillance catches them, defeat is unavoidable. The player then has to progress using any detail to reach the objectives despite the handicaps.

In this case, the dynamic highlights the use of cunning to face adversity and fatality. 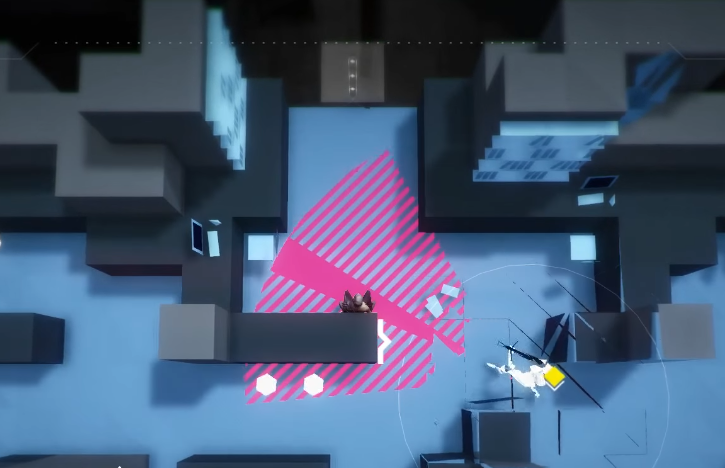 Advantage to the Player’s Choice:
Depending on the game's indulgence, the balance of power between the player and the surveillance may vary.

In this case, the player can pass accesses that are watched by the surveillance by using stealth, or by directly using force and then remedy problematic situations generated when detected. 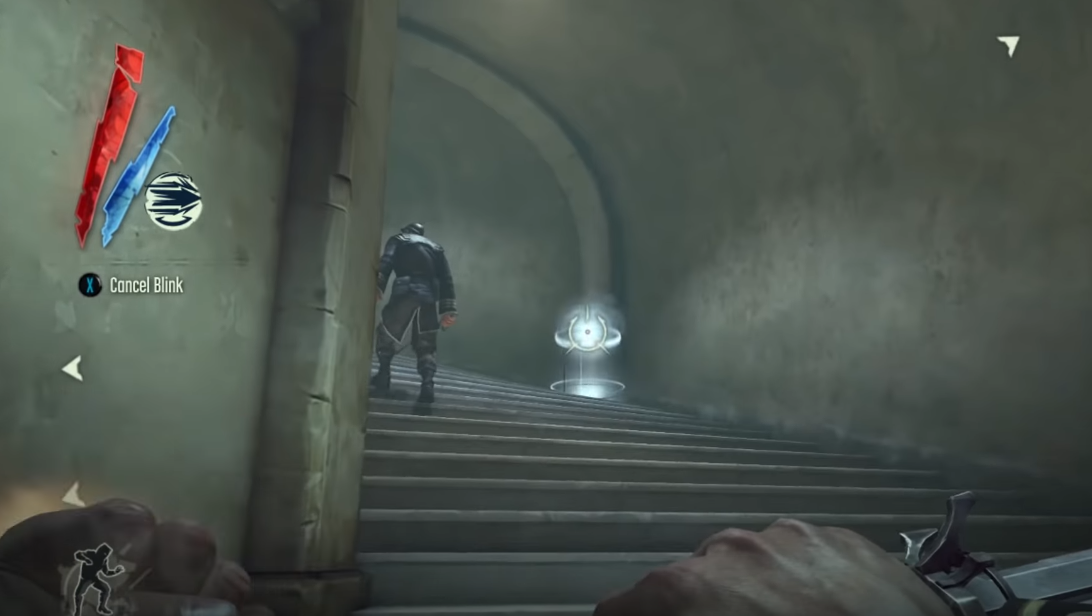 Here, the dynamic is variable. The player is more free to choose the way to operate. Using stealth is not always necessary.

To allow a stealth approach, the game has to offer conditions, places, accesses, with very little risks, favourable to furtivity, that can be used as hideouts, vantage points, windows of intervention, or escape ways that may contain useful items or objectives.

To get the best of these conditions, the player must be able to collect information about them.

Information is very important to reach the goals. It helps to establish plans, itineraries and to spot opportunities for interventions to overcome blocking situations .

Information is accessible through vantage points determined by conditions, places configurations and timing.

Depending on the conditions and configurations offered, the game distributes information in a detailed or limited way.

Reconnaissance is greatly assisted and situations are clear and detailed. 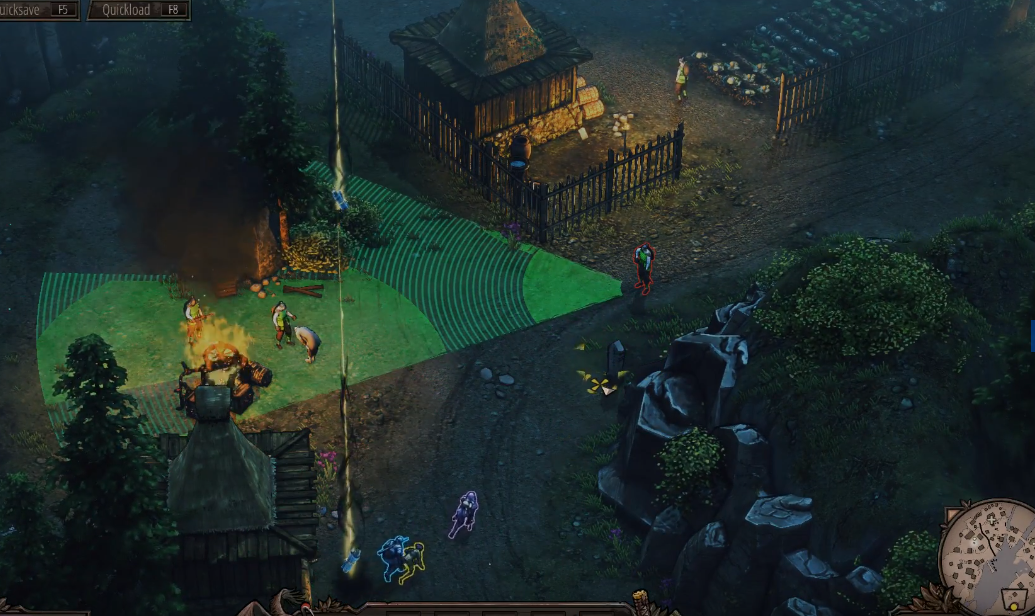 In this case, surveillance is not hidden by the environment configuration otherwise skills of the player allow to discover where threats are.

The challenge is to operate like a tactical commando executing precise interventions.

Limited Distribution:
This distribution offers a partial knowledge of the situation.
Information is incomplete, cut, hidden and every detail matters to progress without suffering serious consequences.

Such withholding of information imposes constraints that may change according to the conditions and what the player does. These limitations lead them to look for the best, and sometimes only, vantage points to know what to do next.

These unknown aspects create doubts in the player’s mind and they participate in their need of being stealthy. In some cases, vantage points narrowness reinforces the sensation of accessing confidential information, or escaping through unexpected ways out.
Also, in contrast, large empty spaces give the feeling of being alone but very exposed to the surveillance perception which amplifies doubts about risks taken.

The challenge is to progress carefully with little information. 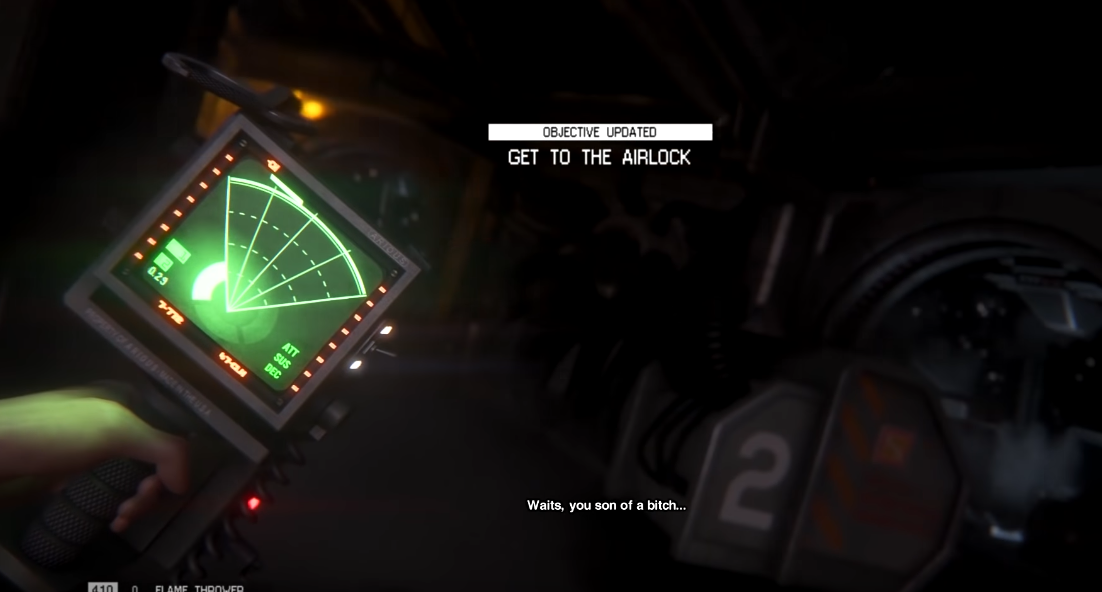 All these conditions and configurations influence the surveillance behaviour and dictate to what extent the player can act.

Surveillance represents any entity in charge of detecting or arresting the player intruder. It makes every objective unreachable by the simplest way.

Indications about the surveillance status show how and to what extent it gets involved in the search of intruders. Then, the player knows how much they need to be careful in order to avoid it.

Surveillance status is represented by:

The Perception:
The perception helps the surveillance to detect the player exposed and in range.

The surveillance perceives according to its abilities (ex: cone of vision, noise detection distance ...), the conditions (ex: darkness ...), obstacles and places properties (ex: resonant metal ground ...) in which, the player and the surveillance, evolve. 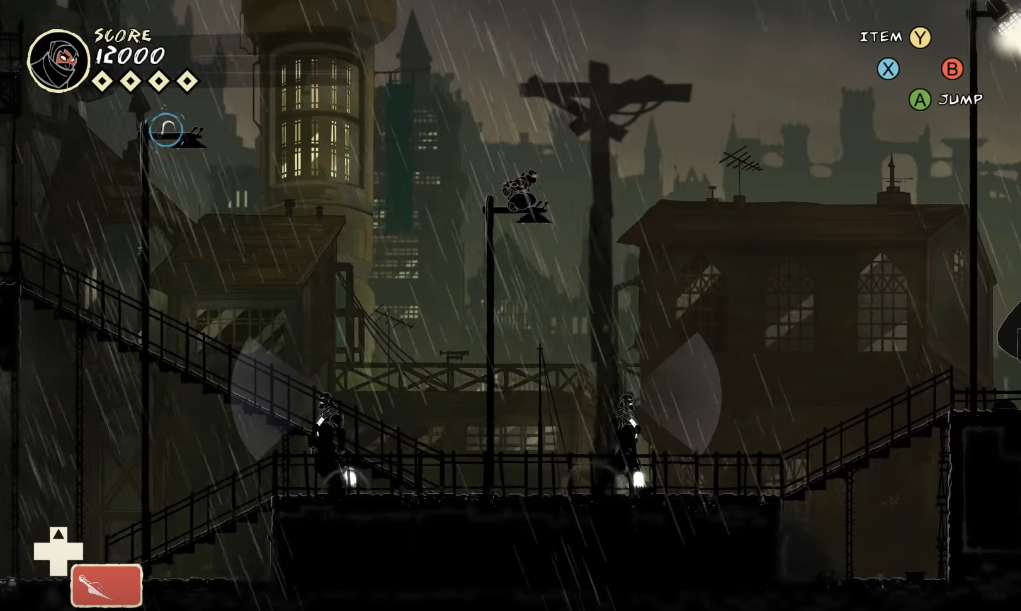 Mark of The Ninja Remastered

The Routine:
The surveillance acts depending on routines according to the situations.
In addition to telling how to behave (ex: patrolling around a treasure chest,  going back to turn on the light …), routines indicate what task is executed. These repetitive behaviours are distinguishable and memorable to let the player take adequate measures to avoid or counter them. 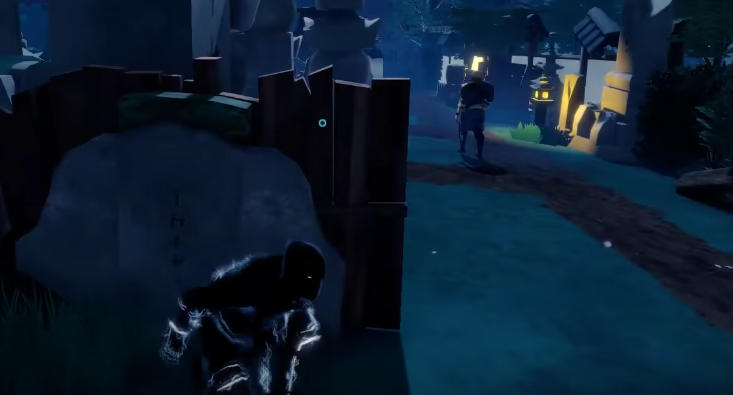 The Vigilance:
The vigilance helps surveillance to know how much it needs to get involved in the research for intruders (ex: faster movements, further research in dark spots …). 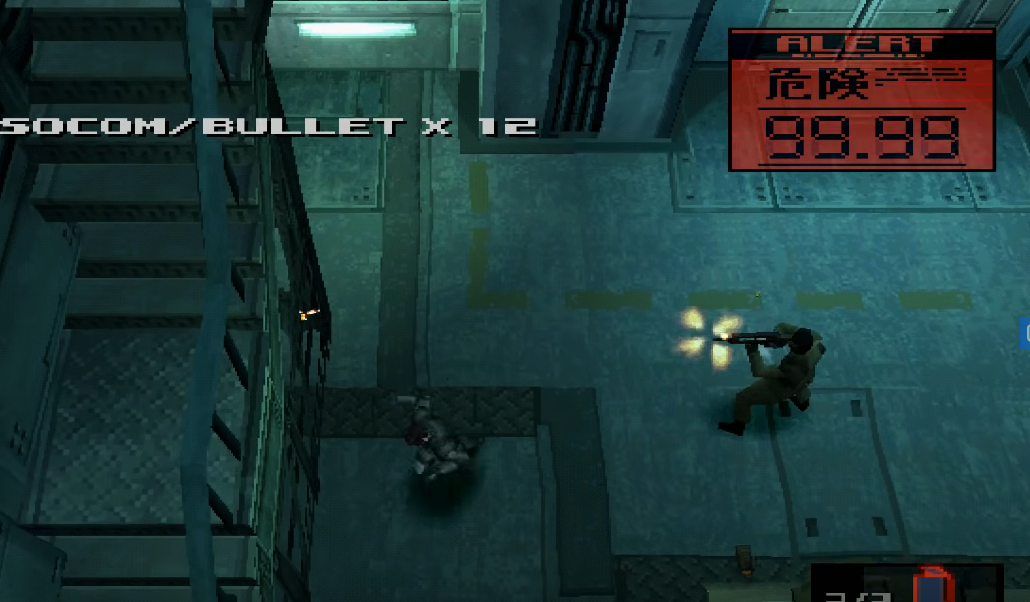 Surveillance is more or less vigilant depending on the situation (ex: talking guards, alert, offensive ...) changing according to the player's actions.

The player is an intruder who has to find and reach objectives using ideal conditions to pass through the surveillance.

To infiltrate, the player can use:

Stealth:
Stealth approach helps the intruder to avoid risks or escape the negative consequences of being caught by the surveillance. To do this, the player has to be invisible, act without being detected and vanish without a trace.

Depending on the conditions, the intruder presence produces effects noticeable by the surveillance.
Stealth depends on the surveillance perception, the conditions, but also on player’s exposure (ex: pass in front of a guard, hide in a closet ...), their actions (ex: use a gun, move in a crouched position ...), and their abilities (ex: use smoke bombs, take cover behind a wall, use camouflage ...) to hide. 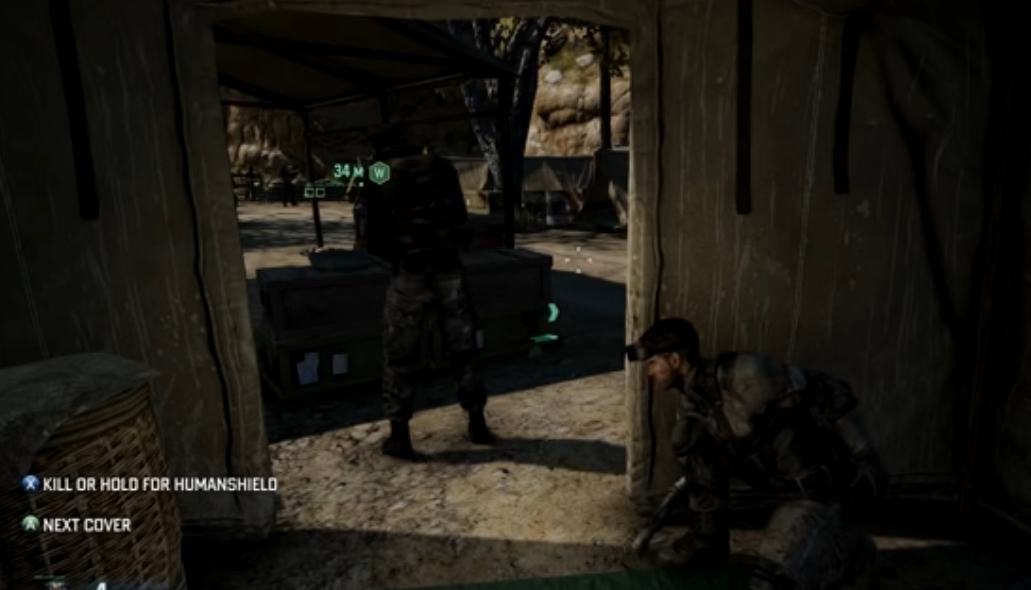 By doing stealthily, escaping negative impacts, or neutralizing surveillance without alerting other opponents, the player can feel the power and impunity of being elusive.

Observation:
Observation helps the intruder to gather useful information about blocking situations they have to overcome to reach their goals. With it, the player can learn more about the surveillance routes, the risks and the opportunities to find stealthy places, vantage points, windows of intervention and items. 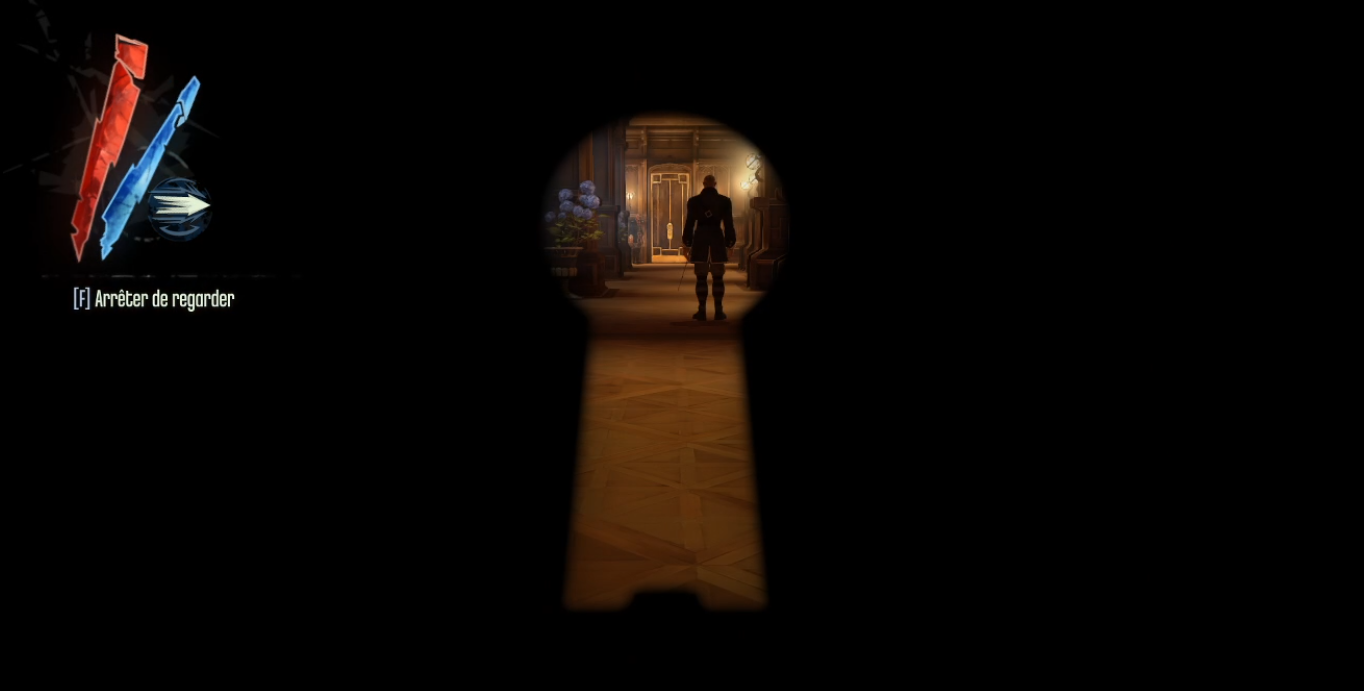 Intervention:
Interventions allow the player to reach points of interest in order to hide, observe, or to get useful objects and achieve goals.

Player’s observations help to find windows of intervention. These windows rely on the player’s ability to use gathered information and wait for the best moment to execute the planned action.

To act stealthily, interventions must be able to be done in accordance with the constraints of the surveillance perception.

When there is no window of intervention available, the player should have tools to change the conditions, the surveillance vigilance, or the place configuration (ex: throwing a pebble to create a diversion, hack remotely a locked door, stun a guard ...) to create alternative accesses, get rid of risks or prevent alerts.

Here, the tension is based on the accuracy of the player to execute plans and their ability to adapt to evolving situations.
This tension builds up around efforts and the level of risk. The more the player invests efforts while surveillance is around, the more the pressure increases to the idea of losing progression if spotted.
Tight windows of intervention with big risks gives stress and excitement to the player.
And, finding the ideal moment to act adds tension because if there is hesitation, context gets lost and risks of bad timing grow and increase the fear of negative impacts. 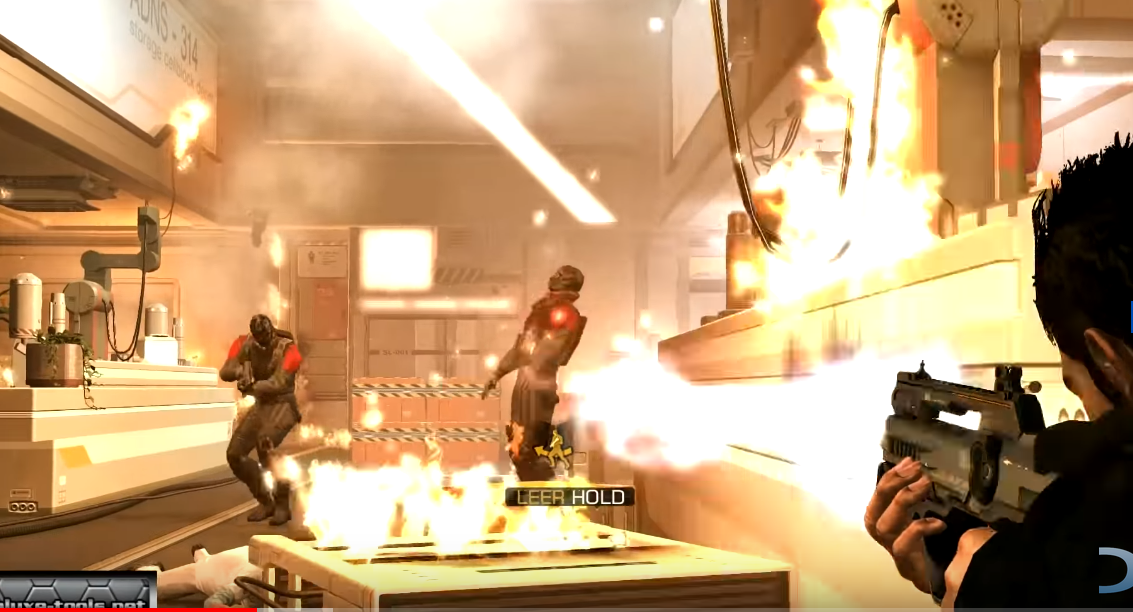 Adaptation:
In order to react to changing situations, the player must have tools to evade (ex: climb on roofs ...), hide (ex: take cover behind a wall ...), or neutralize the surveillance (ex: stun shot ...).

Unexpected situations (ex: arrival of surveillance reinforcement, alert, hideouts destruction ...) can lead the player to find how to disappear quickly when there is no plan for it. And surprising unforeseen can increase the tension.

The expected sensations while infiltrating may change depending on who is playing.
That being said, doubt when the player lacks information, stress and excitement approaching surveillance stealthily, the satisfaction of being invisible like a breeze and the impunity of reaching our goals without getting noticed, are sensations and feelings helping them to believe the atmosphere and the tension felt lead to the infiltration.

The player experiences stealth games in a loop of tasks to progress step by step.

To sum up, using information to locate and take opportunities to reach stealthily the inaccessible, that is infiltration.

This document has been created for these reasons:

I always took advantage of the synthesis of works and experiences from other creators, who shared it on the internet, to learn, discover and increase my knowledge about rich topics difficult to master.

I wanted to return the favor in offering to any person, trying the difficult exercise of making a stealth game, what seems to be for me, the basics of this genre and a starting point to think about it.

I am not going to hide it, this synthesis of 2 years of research, observations, thoughts, tests, mistakes and notes allows me to show you to what extent I got invested in the making of my game Volt Patrol. So it is also a way to invite you to take a look at it ;)

To create this uncommon mix, I had to absorb the infiltration basics in order to combine them with driving mechanics. And, honestly, combining these two seemingly incompatible genres the right way was a real challenge. .

If you appreciated this document, if you want to support me and most importantly if you are interested in the game:

Add Volt Patrol to your wishlist and try the demo on Steam ;)
https://store.steampowered.com/app/1109300/Volt_Patrol/ 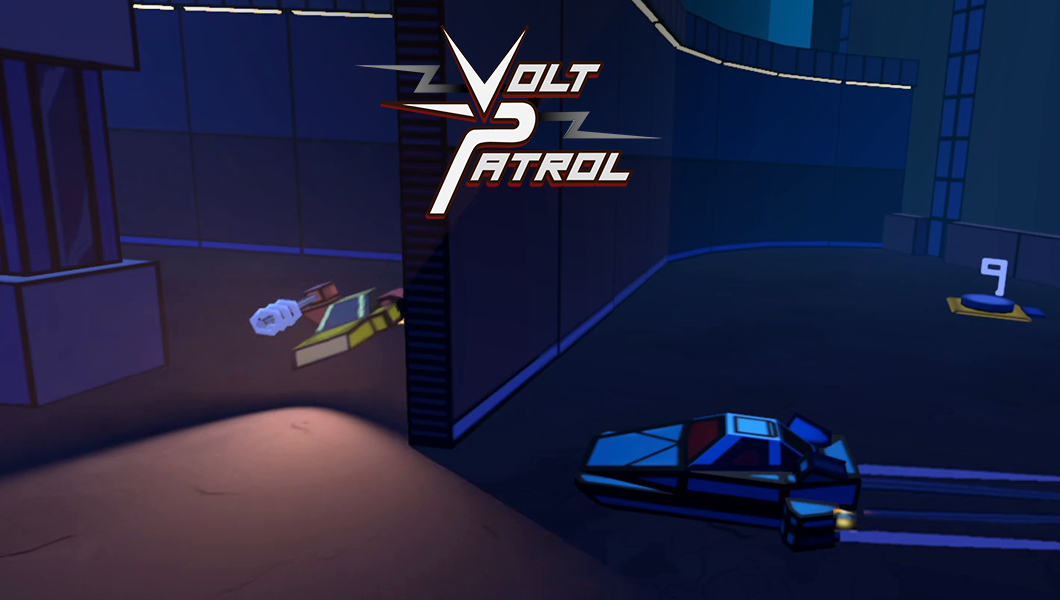 PS: This document shows only my observations and my thoughts so I may have missed, despite my efforts, representations or sensations you could perceive in stealth games.

Some additional resources to go further: