Keep or kill: 3 design features to test during prototyping

It’s easy to start doubting a prototype that delivers high CPI or low retention at such an early stage. Follow this checklist to speed up the testing phase and know with greater certainty if your game has legs or you need to go back to the drawing board
Danielle Reich Cohen
Blogger
June 09, 2021

After building a prototype and starting to test it, you may be asking yourself, “is my game clear enough?”, “am I using the right characters?”. It’s easy to start doubting a prototype that delivers high CPI or low retention at such an early stage.

During the prototyping phase, in which you’re honing your concept before moving onto marketability testing, it’s important to test different features like camera angles, elements, and situations to maximize the game’s potential and confirm whether it’s worth continuing on or if you should go back to the drawing board.

For hyper-casual mobile games, speed is of the essence so you need to come to a conclusion quickly. However, being thorough and being fast don't need to contradict each other. Follow this checklist to speed up the testing phase and know with greater certainty if your game has legs.

1. Play with camera angles and perspective to enhance clarity of gameplay

Nailing the right camera angle and perspective will enhance the clarity and purpose of gameplay - it’s a different way to tell the story. We know this from other visual mediums, like photography, where depending on the angle, the entire narrative changes.

Camera angles affect a user’s perception of the game, too. For example, a runner game that uses a wide angle and scrolling camera can make the game clearer for players as they see what’s coming next in the level.

Mad Dogs is an example of how switching up the camera angle and perspective in a game can help lower CPI and boost retention. In an early version of the ad creatives, they used a side-view camera angle which resembled the angle used in the game itself. The creative had a high CPI of $0.41, though, so they tested an iteration that used a first-person POV from the dog’s perspective. This version brought CPI down to $0.23 and performed so well that they designed a bonus level letting users play from the dog’s perspective, which boosted retention by 4%.

As we see in the example, it’s wise to first test alternatives to the camera angle and/or perspective on your prototype’s ad creatives. This requires much less time and fewer development resources than if you implement these changes directly into the build. It can indicate if it’s worth adjusting the perspective/camera angle in your prototype itself and it can also help prove if the concept is a product-market fit before you move onto the marketability testing stage. 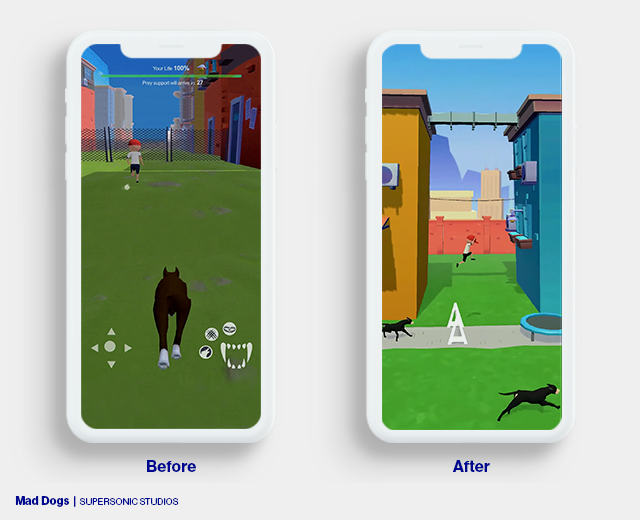 2. Find the theme, characters, and environment that resonates with a wide audience

The most successful hyper-casual games are accessible to a very wide audience, which helps them scale quickly and profitably. During prototyping, it’s important to confirm that your game has this level of appeal - iterating on your theme, characters, and environment is a great way to expand its accessibility. You can confirm that your changes are having an effect by checking CPI and in-game metrics like playtime and retention.

When iterating on your theme, note that there’s not just one type that works for a certain hyper-casual genre. What it comes down to is continually testing your prototype to find out which theme resonates most with users. A bakery theme might be the secret to unlocking a $0.10 CPI for your prototype, or maybe a jewelry theme is the winner. While there’s no single rule of thumb defining the best theme for hyper-casual games, we suggest you stay away from niche concepts like outer space or lesser-known sports (e.g. squash and curling).

When testing characters, the same idea applies - test to see what performs best. While you may think a stickman will give you the best CPI possible, perhaps a version of your prototype with a female character wearing high heels surpasses every benchmark. We recommend trying out trendy characters you see in the hyper-casual charts, like the feminine characters we’ve been seeing in the top since March 2021.

Testing variations of your prototype’s environment is another way to enhance your game’s accessibility, and it can help make your gameplay more clear. For the game Hide N’ Seek, the developers changed the environment featured in the ad creatives from an open space - like a farm - to a maze-like, enclosed area. Creating a closed space reduced the distractions and made gameplay much clearer to users, which lowered the CPI from $0.25 to $0.14 and increased in-game metrics. 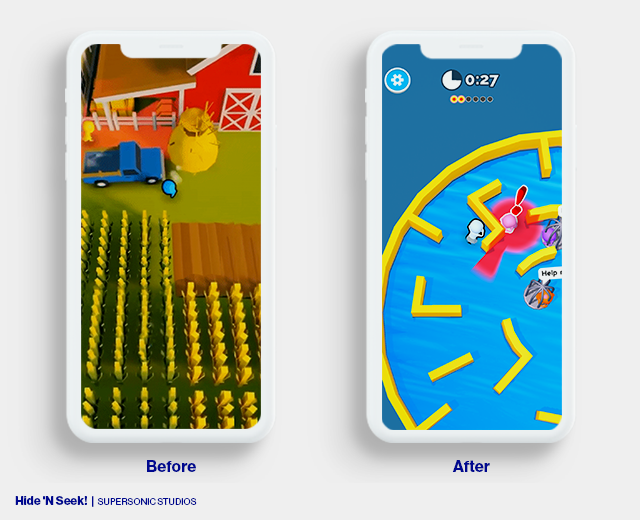 Like I mentioned in the previous section, changing your theme, characters, and environment in your ad creatives can save you time and resources before altering your build. When tinkering with these features of your prototype, try to think about what will be immediately understood by users - your creatives are a snapshot of the game and should entice a wide audience to play by making it clear what it’s about and how it’s played.

Your game’s controls can complement your theme and concept, which can improve the user experience and help give your prototype’s metrics a boost. Ask yourself, “is this control the most natural for this type of gameplay?” as you try testing versions of your game that use controls like swipe, tap, drag, or hold and release. Your goal is to find a control that will complement gameplay and make the input-output relationship clear.

A/B test different controls for your prototype directly in the build and right from the get-go as you develop new versions. Beyond looking at the metrics like retention and playtime, play the game yourself and have others play it to see what feels right.

Minimize FOMO about your prototype

Prototyping is the time to confirm your game has potential - and to move onto your next idea if your CPI is high and refuses to budge. The three prototype testing tips above are the most important and impactful parts of your game’s design and creatives that you can iterate on without spending too much time - the entire prototyping phase for a hyper-casual game should take no more than 2-3 weeks. They’re intended to help you quickly confirm if your game is worth continuing to build out without fearing that you missed out on an opportunity to hit CPI and in-game metric benchmarks.

If you’re not coming close to the benchmarks you need for the next phase, even after a few iterations, it’s time to go back to the drawing board and create a new game concept. But with a thoughtful approach to testing, you could uncover the feature that proves your game has promise and move forward in the publishing process with confidence.