It's Not an Educational Game

If your educational game doesn't teach anything, guess what? It's a quiz.
Ryan Creighton
Blogger
January 27, 2012

[this article by Ryan Henson Creighton is re-posted from the Untold Entertainment blog, which is awesome]

Now that we're in a sort of golden era of video game idealism, when wild-eyed evangelists are spouting that games can change our lives, i think we should get a little tougher on our definitions so that we really can become a better industry. In particular, i'd like to drive attention what some people pass off as "educational games" which are, in reality, quizzes. 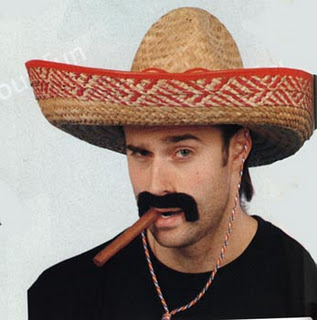 There's a vast difference between a game that educates a player, and a game that requires a player to be educated.  In the past year, i've sat down in front of a number of "educational games" which, right from the title screen, require me to prepossess certain specialized knowledge in order to succeed.  These game offers no training or instruction.  The only way i could learn anything from them was to guess and, if i was incorrect, hope that the game would show me the correct answers.  While there's something to be said for learning-by-failing, i'm not convinced it should be your first line of defense while educating.

Here's a great example: Financial Football.  This "educational game" is sponsored by Visa and the NFL, and the production values (for an educational game) are through the roof.

In the game experience, you fill the role of an unseen coach.  In order to successfully choose your team's play from your playbook, you have to correctly answer a question about finances.  The clock ticks down as you face a multiple choice questions about 401k plans and mortgage rates.
B... but what if you don't know anything about finances?  Isn't the game supposed to teach you?
No!
Apparently, a traditional schoolteacher is supposed to print out the traditional, dry-as-toast lesson plan pdfs linked to from outside the game and teach you the underlying concepts using (presumably) the age-old one-two combo of blackboard lectures and worksheet print-outs. 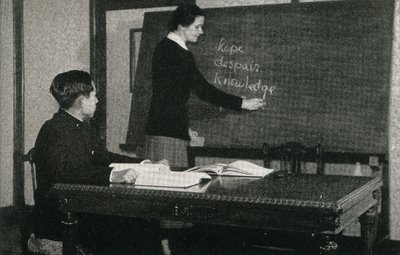 The future is now!

It's a mistake to call something like Financial Football an educational game.  It's a rich media quiz, meant to be the carrot-on-the-stick to cap off a few classes of deadly boring traditional schoolwork. This game is the equivalent of signing up for a course and walking in the first day to an exam.  We can do so much more with educational games!
(Note: If you're a cynic like me, you're already suspecting that Financial Football isn't an earnest attempt at creating an educational game, but rather something Visa developed as a defense against accusations of predatory or unfair lending practices - the equivalent of McDonald's funding Ronald McDonald House ... an organization to help children ... while the food they sell hurts children.)

i played an educational game recently that i feel got it right in a number of ways.  It's Playful Minds: Math (5-8 years old) from Gameloft. 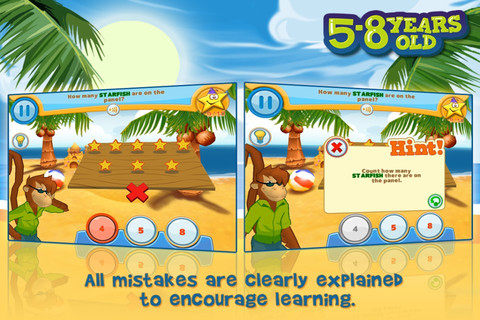 A number of math-based mini-games - essentially quizzes - are scattered across different themed maps.  The game runs a short tutorial video explaining each new concept as it's introduced. It provides tools for interacting with the elements that aid in figuring out the answer; for example, in the counting game, you're asked how many whatevers there are on the screen. As you tap each one, the voiced-over character counts them with you.  If you get a question incorrect, the game doesn't just throw a big red X in your face and move on ... you keep trying until you're correct.  The game will repeat the instruction for you if you're confused.  It'll replay that tutorial video.  You can tap a speaker button at any time to hear the instruction again. 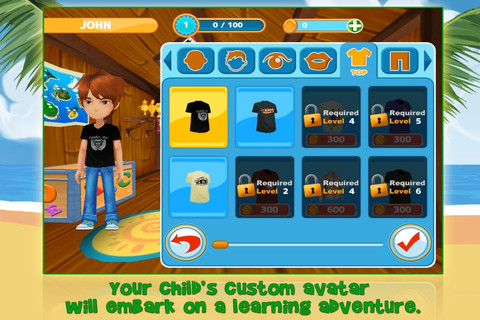 Hey, kids: add up the number of dollars your parents will have to pay to buy you these cool virtual goods!

Are you developing an educational game, or a quiz?  Make sure that your game actually teaches something, and that it gives players interesting ways to explore and internalize the subject matter before you hit them with a time-limited gun to the head.  Let's strive to create more games that use all the advantages of an interactive medium to teach before we test!