Inside the world of Yo-Kai Watch

What the heck is Yo-Kai Watch and how does the game actually work? What are its strengths? Christian Nutt dives in.
Christian Nutt
Blogger
November 20, 2015

I really like Level-5's 3DS RPG Yo-Kai Watch. I'm a little surprised. I guess I shouldn't be! Games, I find, are generally popular for a reason.

It's something of a relief, though, to know that Japan's premier video game phenomenon of the 2010s -- hell, maybe its biggest pop-cultural phenomenon -- is as good as it should be. The game is just plain fun -- it's the kind of game I want to be playing when I'm not, that I'm nothing but fond of. And it's interesting enough that I feel like it's worth discussing why it's good.

But before I do that, there's something I want to get out of the way. Everybody compares Yo-Kai Watch to Pokémon. It's totally understandable. It's a JRPG. It has (some) creatures that evolve. It targets the same audience. And with an eye toward Japan's current Yo-Kai Watch craze, it makes us feel like it's 1999 all over again.

Talking about Yo-Kai Watch in the context of Pokémon limits the conversation too much. It's like talking about Batman only in the context of Superman: "He doesn't have any superpowers! He's not even an alien!" The fact of the matter is that both games are significant events in the evolution of the Japanese RPG, and were shaped by the context of the times in which they originated. 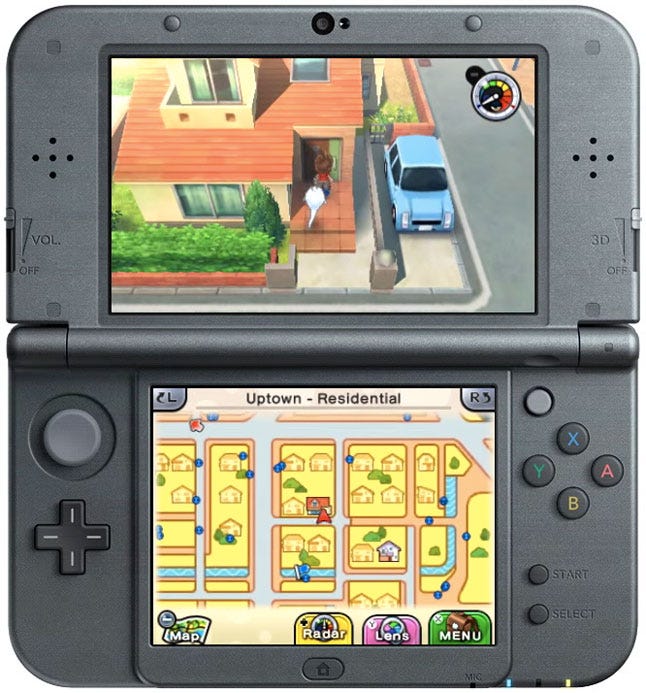 One of the cool things about Yo-Kai Watch is that it was dreamed up in the era of the open-world RPG, and what a lovely open world it is. The game takes place in a realistic but idealized Japanese town, and there's a great attention to detail to make it look and feel real, both in terms of visual polish and the way it's laid out -- as a series of districts, each with their own character and purpose. Here are the shops and offices near the central train station; there's the old part of town, with the working-class houses and the old shrine.

You get the sense you're exploring a town where people live and go about their daily business, and it's at (pretty much) real world scale. The art direction is truly top-notch, too -- cohesive and nuanced. It's the perfect suburb for a young boy's supernatural summer vacation. 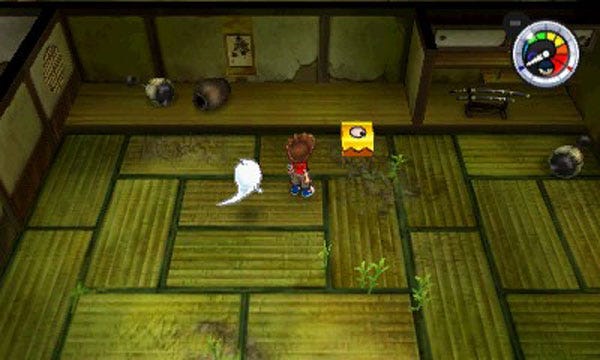 And because it's an open-world game, it's got a fully quest-based structure, and you can progress the game as you wish (or not). That's still a relatively rare thing in a JRPG, as a core game structure. Running around town and taking care of this here, that there, and not really worrying about doing anything in particular except when it seems convenient or interesting is simply freeing, while the game's reliance on relatively simple quests makes it easy to pick up or put down. It's a great structure for a portable RPG and makes the open-world RPG a genre for anybody (young or old, experienced or novice) to enjoy, a stated goal of the franchise and no doubt central to its huge popularity in Japan.

It does have some of the same addictiveness as the developer's engrossing Fantasy Life, but if anything, Yo-Kai Watch feels like Shin Megami Tensei for kids. It's centered around spirits or creatures that infest the real world -- it's a lighthearted corollary to the apocalyptic Tokyo of Nocturne, for example. 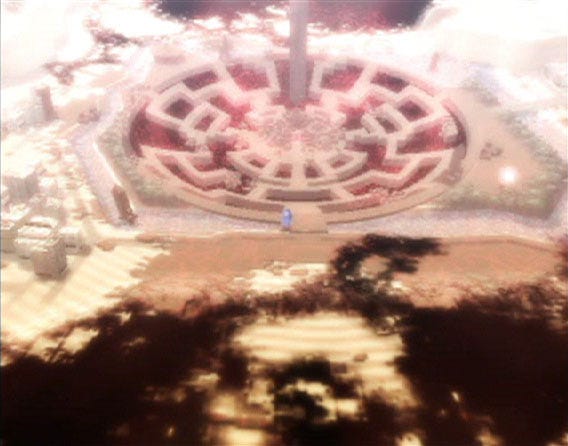 Yo-Kai Watch is about exploring and understanding the underpinnings of a secret, hidden world. Usually the story of a MegaTen makes that strangeness overt -- it literally consumes the world, in one way or another -- but Yo-Kai Watch is constructed from the kind of secrets kids fantasize are really behind what happens. It's a clever way to make a game that fits the way kids think.

Go ahead and compare it to Pokémon; but know that you could just as easily discuss what it shares with EarthBound, I think; it's much, much gentler and certainly a lot slicker, but it's about kids, their problems, and how they see the world -- and navigate it, too. Getting around town puts you in a kid's shoes -- traveling on foot and by bike, seeking the quickest route via paths, byways, and shortcuts through yards. 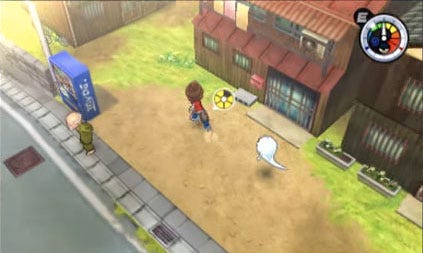 Another way it reminds me of MegaTen is that the game's battles center around managing a party of the yo-kai you recruit. The battle system caught me by surprise, but I like it a lot. You have a party of six yo-kai, placed on a wheel. During battle, three face your opponents. At any time, you can rotate the wheel and determine which yo-kai get to fight. It's simple and effective -- and quick.

The game's designers know that just because a gameplay system exists it doesn't mean that players will engage with it. Take "inspiriting" -- a kind of spiritual infection. You can only clear it by rotating a yo-kai to the back row, shoving different party members into the battle. And there are other reasons to spin the party, too -- defensive needs, trying to use the right elemental attack, whatever. It's elegant and deliberate game design. 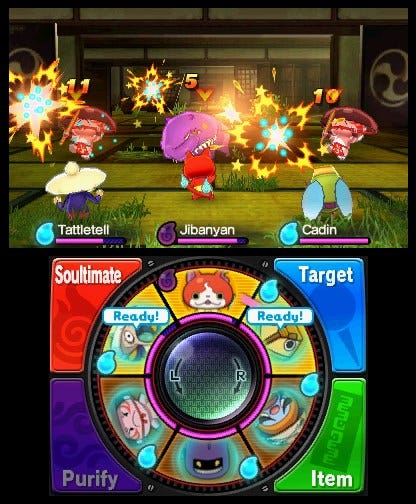 The battles are fast, fun, and not quite like anything else I've ever played. I also think the fact that yo-kai are more-or-less autonomous fits the game's theme and atmosphere really well. They're sentient. They talk. And so they act on their own.

The net result of all of this is that regular battles are a snap, while boss battles keep the player very active, between the need to manage the party's physical and spiritual health, the boss' (usual) multiple parts and phases, and the silly, simple mini-games you have to do to for special attacks.Auto-battles may sound boring, but the pace keeps things entertaining. As a game design, their use is a clear nod to modern RPGs and modern (and broad) player expectations -- not a long-running series' design legacy or fusty genre conventions.

If anything, I think that philosophy is the key to the game's appeal: it's quick and carefully designed. There's also always something to do. You split your time between battle and quests, with story and dungeon segments every so often -- as much as needed, and no more.

The overarching feel I'm left with is of a studio that had a very clear vision for what kind of game it wanted to make, and who it was made for: a wide, RPG-friendly audience that has game experience but is open to new approaches. It evokes a strong sense of place and its secret world theme offers the developers creative flexibility and its players surprises.

And though its Japaneseness is deliberately obscured in the West by a main character called "Nate" and a town called "Springdale," anyone who would care can easily see where the game is really set. The yo-kai theme has had me thinking a lot about Japan and the supernatural; I think the clumsy definitions of "yo-kai" (and weird explanations of its premise -- stuff like "yo-kai aren't ghosts, they're yo-kai") are necessary because, post-Christianity, Westerners by and large don't hold animistic beliefs. Japan still does.

The game's whole portrayal of yo-kai -- they're just going around doing what's in their nature, and while it might cause problems big or small, that's just how they act -- gives the game less of a spooky Halloween atmosphere than one of a gentle, humanistic chaos.

Yo-kai Watch is very much its own game, then, with its own gameplay and its own creative and cultural perspectives. It's really not hard to understand why it's become such a phenomenon -- at least in Japan. My expectation is that kids in the West will be, well, kids -- open and ready for anything, if the idea hooks them. Adult players will also, however, find a lot to appreciate, too.