We just completed our project for the Oculus Mobile VR Jam. Woot!

Half the score is based on “innovation,” so we spent a significant amount of time considering ways to make our game innovative. We decided to go with a 100% gaze controlled game. Here are 5 things we learned.

Moving around in VR games can easily cause motion sickness. Many games overcome this by simply keeping players in one place. Bazaar uses a related technique - players go really, really, slowly. We designed the game around this limitation -- by creating a collecting game, players didn’t notice how slowly they were actually moving.

Despite moving slowly, we wanted players to occasionally progress quickly to their next objective. Through play tests, we found that if players were looking exactly forward, they could move more quickly without getting motion sick. Even looking a few degrees away from exactly forward was uncomfortable, though. Because of this, we used techniques to keep the player’s gaze directly forward.

We introduced a target gaze ring (shown below), which appears when the cursor gets near. 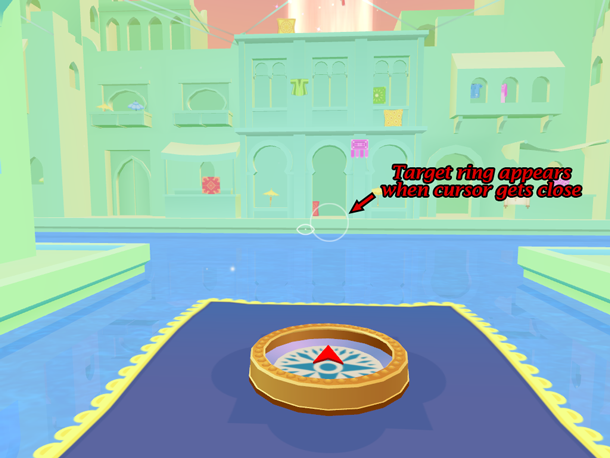 A number of effects pulling the player’s gaze to the center get stronger as the cursor nears that point: 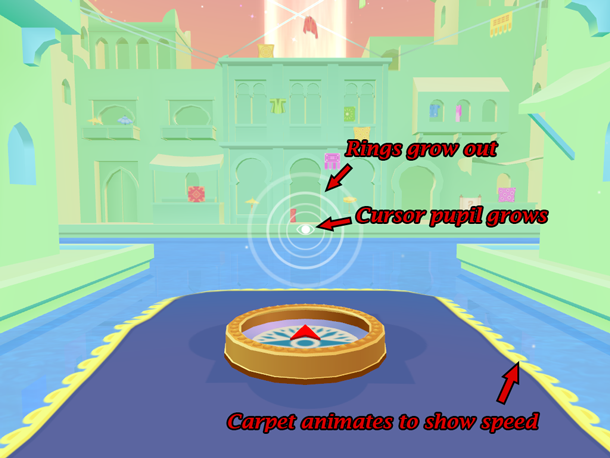 The result? We found the carpet could go 10 times faster without players complaining of discomfort after employing these techniques.

The second area we focused on was how players could make choices within the Gear VR without touching a button.

We decided players could indicate they were done with the scroll by using a nod gesture. We felt that was more natural than “gaze-and-hold” on a button which can disrupt the players sense of being in the virtual world. 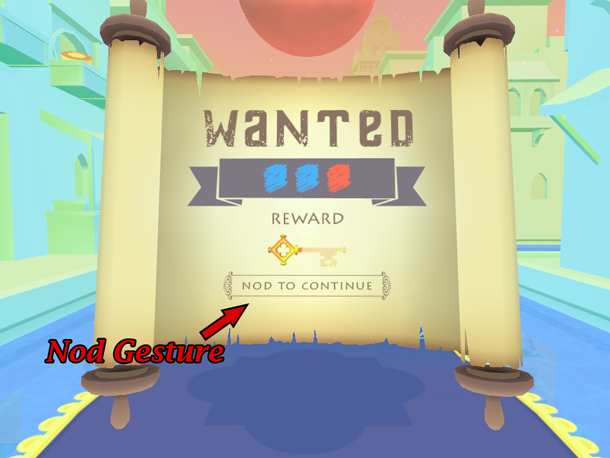 How do you encourage people to look around at the beautiful world, but also encourage them to look in particular places to keep the game progressing?

In Bazaar, when a player completes a collection quest, they are rewarded with a constellation appearing in the sky. Our early playtesters rarely looked up at the sky and so didn’t notice their reward.

To overcome this, we did several things. A surprisingly effective technique was to stop the carpet. This, by itself, always made players start looking around. They wanted to know why they stopped.

Next, when the carpet stopped, we put a huge glowing star on the front of the carpet. This glowing star was the indication the player had received a new constellation. The star also had pulsing 3D sound which helped players find it. 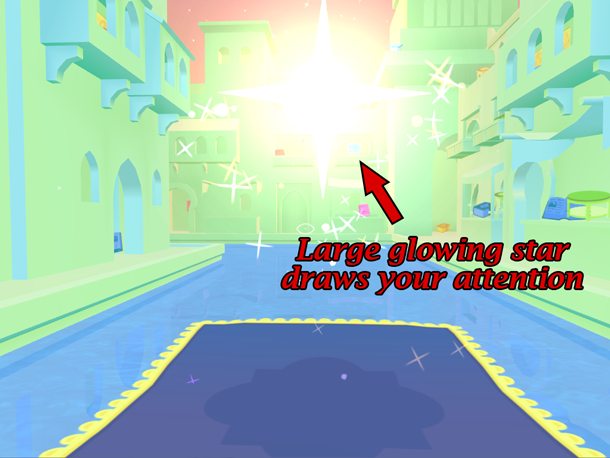 To make the game progress, players had to follow the star as it went up to the sky. 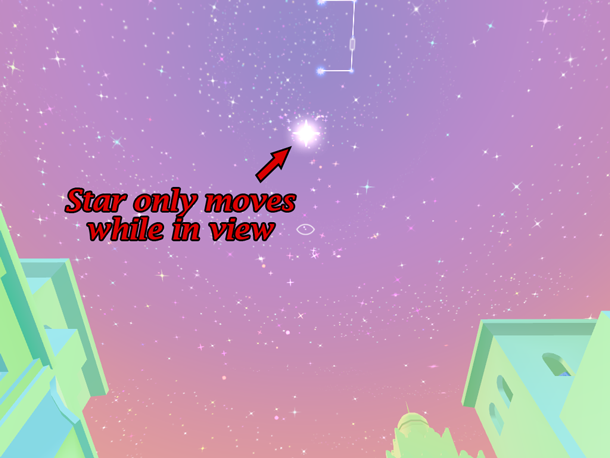 Now players are looking at the sky and can see their new constellation. 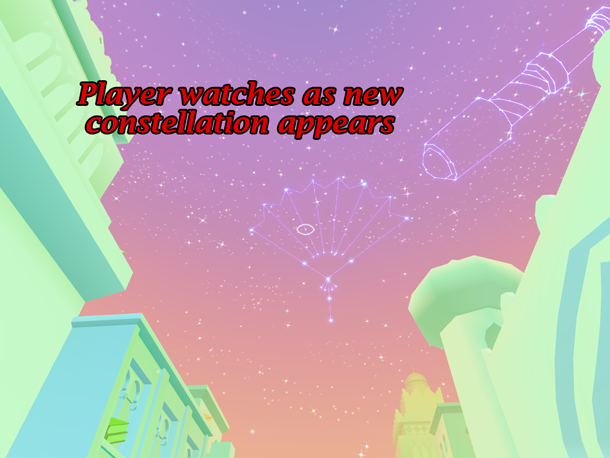 What could we add to make a novel collecting game in VR? The magic scope was our answer. The scope enables players to see through glass so they can collect hidden items.

When you’re in scope mode, the left eye is blacked out and the right eye feels like looking through a scope (shown below). Players mentioned they instinctively closed their left eye when they used the scope in the game -- since that’s what they would do in real life with this object. This creates a fun, new experience for people -- to be using an item like you would in real life, but simulated with a VR headset. 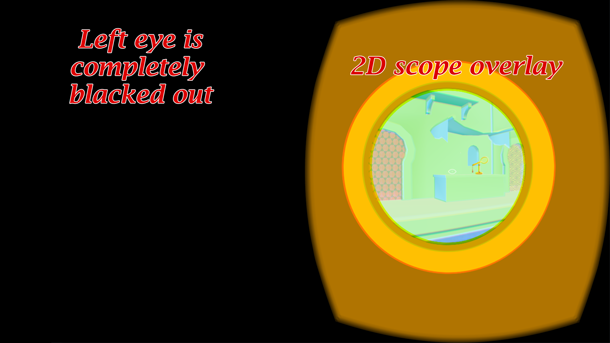 While this effect is interesting, the scope caused some feelings of claustrophobia. Consequently, we limited the collecting games that took place in this mode to 15 seconds.

Lastly, in a 100% gaze controlled game, turning was a challenge. As a player nears a corner, we needed the player to realize that gazing a direction was a choice to go that direction. The biggest indication was a turn arrow that appeared, though we also made the carpet lean into the turn, and played a sound. If the player failed to make a choice they crashed and lost health. All these techniques encouraged players to look forward into turns.

It was successful - play testers didn’t complain about motion sickness, though we did get feedback on how to make this technique happen sooner and smoother. 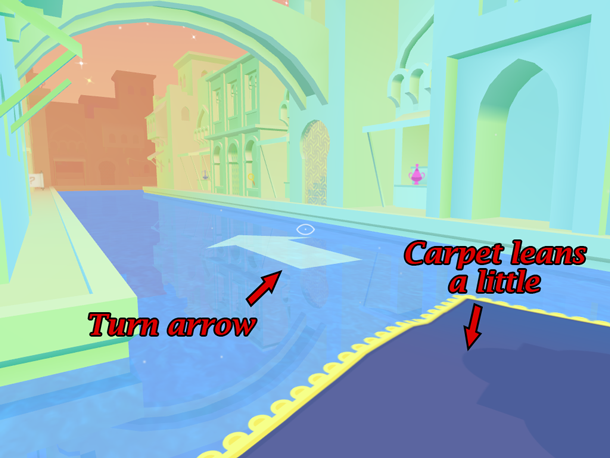 Developing a 100% gaze controlled game gave us an opportunity to develop techniques that felt natural to the VR world. There is still so much to learn about VR interfaces -- hopefully, sharing some of the things we learned developing Bazaar will help others make their VR games.

* If you find Bazaar interesting you can vote for our project!