Games stories are getting increasingly intricate, and are often a core selling point of a game. Yet games don't usually provide players with tools needed to follow a story. What problems get in the way of narrative accessibility and how do we solve them?
Alex Driml
Blogger
July 13, 2020

Games suck at implementing stories. I’m not talking about the writing, the pacing, or structure (not that those aren’t often problems as well.) I’m instead talking about implementing basic features that assist the player in following the story. Game developers have to solve countless problems in order to ship a title, but why in an era where story heavy games are dominating the industry, is it so rare for narrative accessibility to be seen as a problem worth solving?

A common problem with games is that often when a line of dialogue is missed, it is often missed forever. There are many reasons why a player might miss a line of dialogue, sometimes it is an external distraction or sometimes the game itself might create the distraction. Sometimes a player might just miss press the button to advance the dialogue, or maybe the player just had to pause the game to deal with something in real life and now has to return to hear the second half of a conversation. Other players may have a disability that makes following dialogue difficult, such as dyslexia, being hard of hearing, or having an attention disorder. Sometimes they might just realise they misunderstood or misread an earlier line and now the current dialogue doesn’t make sense. Or maybe they've had a difficult day and are having trouble focusing. I could go on, there are plenty of reasons why a player might miss a few lines, and none of them should result in missing important story information. If they were streaming a tv show, then they could easily just rewind a few seconds and catch the missed lines. In fact, this is such a common problem that many streaming services even offer a dedicated “go back a few seconds” button. So why is it so rare for games to attempt to solve this problem? 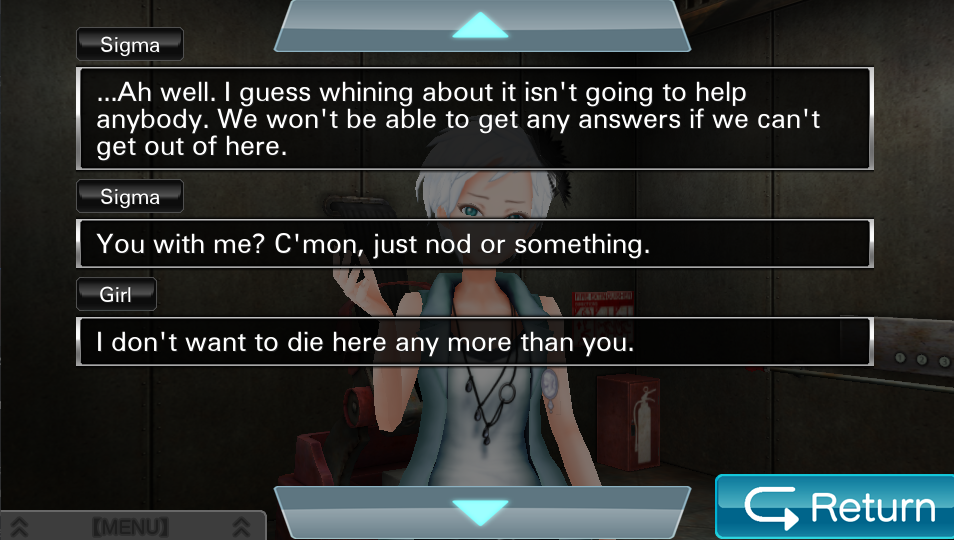 Some games do offer a text log feature, the Zero Escape series (and many other visual novels/visual novel influenced games such as Phoenix Wright, Fire Emblem, or Persona) for example lets you bring up a log of every line of text recently spoken, and honestly, ever since playing my first game with this feature I’ve wanted this in every game since. This shouldn’t be a difficult feature to implement in any game, even if the game is voiced all dialogue should be accessible in the subtitles (and there is no excuse to not have those), so it should just be a matter of storing references to the last few lines of dialogue and giving the player a way to access it, either through a button press or in a menu. The only reason I can think why this is such a rare feature is that it just isn’t being seen as a problem worth solving.

According to David Tisserand of Ubisoft, most players of Ubisoft titles are leaving subtitles on. Obviously, subtitles are extremely important to a lot of gamers with disabilities, but, the majority of gamers aren't hearing impaired, so why do such an overwhelming amount of players prefer having subtitles? I can answer this from my own experience as a subtitle user; it's because they make it easier to catch every line of dialogue if I have them on. It's not just me who feels this way, if you look through the many discussions about this on reddit, you will find the most popular explanation is frequently "I play with subtitles because I miss dialogue otherwise." It seems many players are using one accessibility feature as a substitute for another.

Almost every game will allow you to skip a cutscene, but I don’t think I’ve ever seen a rewind cutscene button. A few games have included the ability to rewatch cutscenes, but often this is something the player has to unlock after finishing the game and is not available when they will actually need it. There are still games being published today that don’t even allow pausing cutscenes, to make matters worse, usually the button that should pause instead skips. I can’t speak for everyone here, but I’ve become afraid to even try to pause cutscenes at the risk that I’m playing one of those games.

Another issue with the medium is the fact that players can often have large gaps between play sessions. With game lengths that last 30, 50, or even over 100 hours, it is likely that some players may stretch their play session out over weeks or months. Sometimes a player may not play a game for an extended period of time due to life getting in the way, or sometimes they may just not touch the main quest for a while and spend several game sessions focusing on side content. Two scenes that are just an hour apart in the script, could be experienced by the player weeks apart. It’s possible that when they do come back to the story, they will have forgotten important details. Again, this can be compared to television, which solves this problem by offering recaps at the start of the episode so that the audience is reminded of plot details that may have happened seasons ago. But games often ignore this problem, ensuring that a certain portion of players will drop out of their adventure early, not because they were bored, but because when they came back after a long hiatus they were completeing lost.

Recaps are one solution that can be imported into video games. A slide show could be shown the player upon launching the game, it could just simply go over the last few major events, or it could be a bit smarter in how it chooses what to show based on how long it has been since the last play session and what might be important to remember for upcoming plots points. More simply, the game could just provide a synopsis in the pause menu. These are features that I do see from time to time, but they are far from universal.

There are also creative in-universe solutions for this. Code Vein includes a hot spring at the home base, when the player enters they can "reflect on their memories" which allows them to rewatch cutcenes and read short descriptions of important in game terms. Dragon Quest has for a long time included the "party chat" feature which allows the player to talk with their party who often reference recent events and can jog the player's memory. Red Dead Redemption 2 has the protagonist Arthur Morgan keep a journal which is updated as the player progresses though the game. It should be noted that many of these solutions do have trade-offs that make them less useful than just a simple summary being put inside of a menu, but the extra immersion it grants may be worth while.

Another solution is to make better use of quest logs. They’re a common feature in modern games, and they certainly help players remember what they need to do next, but too often they seem to just provide the actions without explaining the context for those actions, or give any important details that they player should remember. Sometimes past actions are even obscured or not shown at all. Basically this;

Related is the problem that sometimes games can be packed with lore and world building that can be missed, forgotten, or misunderstood, as well as characters who frequently come and go throughout the narrative. It’s not that uncommon for players to forget a name of a person or a place and need to look that up. Searching it online could risk spoilers as well, break immersion, and is more difficult than it needs to be. However adding it in-game would not only help keep players up to speed, it could also be a place for adding extra lore and details that aren’t important for the main game but are fun to read up on.

Supergiant’s Pyre is a wonderful example of a recent game that went above and beyond with this by highlighting any special terms in red and letting the player immediately access the entry on that word right there and then. It is a perfect example of an extremely creative way to solve this problem by taking advantage of the medium.

Another issue is when the systems within a game itself is fighting for attention with the narrative. Unfortunately, in the current era dominated by open world games, it’s not uncommon for important dialogue to be interrupted by a sudden explosion, an NPC talking, or a mountain lion deciding that now is a good time to attack the player. Sometimes events will just cancel important dialogue entirely. Insomniac’s Spiderman had a great solution for this; when a phone call was interrupted by Spiderman getting into a fight, he would resume the call when the fight was over after saying a line like “sorry I was cut off there.”

These might not be the most exciting features, but they’re important. If we’re trying to tell compelling stories then we need to make games that respect the player’s time. We shouldn’t expect the player to put up with extra nonsense that makes comprehending that story unnecessarily difficult, or to have an encyclopedic knowledge of our creations. If we want games to prove that they can tell stories on the level as other mediums, then first we need to look at improving narrative accessibility.