An analytical look at Ikaruga's Xbox 360 leaderboard scores. Prepare to not be shocked by the results.
Michael Molinari
Blogger
July 09, 2009 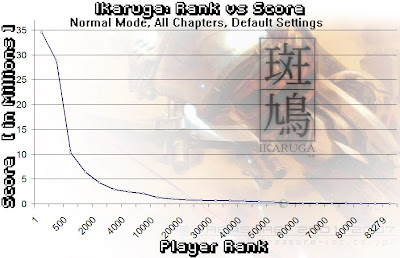 Graph definitely not to scale.

I suppose this whole fascination came about when I checked the Xbox360 leaderboards for all players in the world who completed Chapter 5 on Hard Mode with a rank of Dot Eater. There is only one. Even on Normal Mode, there are about 14. Chapter 4 has just over a dozen people who have even completed the chapter as a Dot Eater.

Don't even worry about score at that point; completion appears to be enough of a reward. Combine this with my curiosity from why I rank so highly in Normal Mode without even touching the last 40% of the game, and the question comes to me: Just how many people play Ikaruga?

The only method I could think of was to scroll through the leaderboards manually. You can't just press UP from the top of the list, so I had to take the long route, 100 scores per screen, for 832 screens.

My wireless controller went into sleep mode three times, once every 24,000 players, while I passed the time watching this fantastic tool-assisted speedrun of Mario 3. Naturally, I jotted down some data along the way, as the path to finding the worst-ranked player also reveals all players' scores at the same time.

For the sake of being fair in my analysis, this leaderboard is not a comprehensive list of every Ikaruga player in the world. Obviously, we have people who only played it in arcades (the lucky ones), on GameCube, on Dreamcast, or on an emulator (missing the point altogether). Then, for the people who have the Xbox version, there are those who downloaded it and never logged back in to Xbox LIVE (thereby never uploading a score for the board), those who changed settings from default, or those who only played on Easy Mode, Hard Mode, or a 2-Player equivalent.

There are also guest profiles on those 360s that cannot have their scores uploaded to the online boards. Bummer. The point is: Normal Mode through all Chapters using default settings is what most people will play, as it's what happens if you keep pressing the A button at the title screen.

Knowing all of this, with what little merit this list has anymore, we can safely assume this is a good ballpark figure for the community as a whole. After over 30 minutes of rubberbanding the controller (Thank you, Gran Turismo), I can say that there have been 83,279 unique active players in Ikaruga. And the curve for those scores was fairly predictable (see image above). Knowing how brutally the learning curve treats players, the top score of 34.4 million points is quickly cut in thirds to 10.3 million by the 500th player.

At 10,000 players, the score is at 1.3 million. From there, it has a steady decline in scores until around the 83,000th player, who has 11,100 points. The dead last player clearly had one goal in mind - to be the very last player on the list - with only 10 points. It appears others have tried to get the lowest score on the board, but many failed with 20 points. So far, only two people know the secret to getting a game over with only 10 points (something I can't figure out myself).

And speaking of low scores, I understand that the game is a tough cookie to play, let alone master, but many of these scores are just horrible. I'm trying my best not to be cocky about this, but if you just shoot at everything that comes at you without switching polarities or using homing lasers, you'll have about 200,000 points in your pocket by the end of Chapter 1, a score that about 20,000 people failed to acquire. If you just hold the fire button down and stare at the screen, you get a game over with 40,000 points, a score that over 4,000 people failed to acquire.

The only reasoning I can think of for these lower scores is that Ikaruga just wasn't the game these people thought it would be. Hype or word of mouth made them get the purchase, but the game was too intimidating, or some kind of Tom Clancy game came out that weekend and swept them off their feet. Everyone dies very early upon first playthrough. And for the next 50 to 500 playthroughs. But the more you play it, the more adept you'll become at simply surviving. These people may have tried, but they didn't continue trying, which is really the key here. Again, not their cup of tea.

An interesting trend I found in the scores is that duplicate scores never really appeared on the list until around the 70,000 player mark. I suppose this is just probability, as there are fewer digits available at this point (five, actually), allowing for fewer possible point totals.

So what have I gathered from all of this? Well, I now know I'm in the top 1% of the leaderboards, but I still have a few hundred hours of practice left until I beat the game. I'd say I've put in somewhere over 100 hours so far in my life. And I'm enjoying every moment of it.

There appear to be tens of thousands of people who are no doubt trying their best to get the hang of the game, learning how to chain, how to survive, etc. In perusing forums for the game, I've seen that many beginner/intermediate players are still a little curious just how to go about chaining in the game. I'd be more than willing to put a video together explaining it, so do let me know if you're interested.

I also learned that if you want to be one of the few proud Dot Eaters in the world, give it a go in Hard Mode. I just tackled Chapter 2 last night, successfully pinning my name up alongside 40-some other brave souls in the world. I dare not venture into Chapters 4 and 5, as I'd hate to be the guy that undid the current guy's sole achievement in the world (though we all know it wouldn't happen even if I tried).

And to finish off the night, here's a wonderful little piece of information from the former top-ranking Ikaruga player in the world (now at a discomforting 4th place), who claimed that the game "is a joke," due in part because of how the port of the game to 360 saw the change in direction of the rotation of lasers that spin around a miniboss in Chapter 3. Kind of specific to be upset at the whole game, but I suppose few others deserve to say it than him. I, too, have been plagued by this minor change, yet it remains in the same collection of unreachable hurdles that the rest of the game has been known to present.

So anyway, let me know if a chaining tutorial would be up your alley.