Our kids can't spell. This is a problem! It's games to the rescue once again.
Benjamin Ritter
Blogger
April 29, 2021

When computers do everything for you, is it worth becoming proficient in the intricacies of language? Our phones transcribe everything by voice. Our laptops spell-check us as we type. Even Words With Friends automatically detects errors and won't let you play a word if it's misspelled.

People in my generation kind of had the best of both worlds when it came to our language education. Not only did we have to do it the long way, it gave us the knowledge to leverage new technologies like spell check to perfect our speech as opposed to relying on them solely.

But as I look around at The Kids These Days, it's clear we're failing our children as they use that spell check tool with absolutely no idea of how it works or why it's sometimes wrong.

I'm pretty salty about this topic because it's so important to me. When I get like this, I prefer to fully understand these bad situations through the lens of snark. Please enjoy the ride as I propose solutions and relieve some stress in the process. My solution? I suggest word games may be able to help our children fail just slightly less than usual.

You may be surprised to hear this, but word games are essential for teaching spelling even in the age of cell phones and spell check. It's especially troubling now that spelling isn’t taught at schools any more and the culture doesn't seem to care. If you’ve ever read your (healthy, developmentally normative) child’s hand-written book reports and immediately questioned the viability of your genes, perhaps it’s time to schedule a family game night.

There’s a fine argument for the lack of spelling education, sure. Technology has improved to the point where we can rely on spell check routines to make us legible in spite of ourselves. It’s similar to how you can reasonably expect to pull your phone out to calculate the tip for your dinner check - the simplest possible act of adulthood now made even easier through the magic of technology. My old teachers told me I wouldn’t always have a calculator in my pocket, but the joke’s on them!

However, this argument crumbles under the lightest of scrutiny. I have a friend who, sweet though she is, remains incapable of estimating that percentage tip. Imagine if I took away her phone. Now look at your kid. Imagine taking away his spell checker. Does he know the difference between “your” and “you’re?” Does he know there is no spell check for tattoos? Is it only a matter of time before he gets fired from his lucrative fast food job for missing a letter in the phrase “evening shifts” he's tasked with writing on the restaurant's roadside sign?

Your hesitation is your answer. 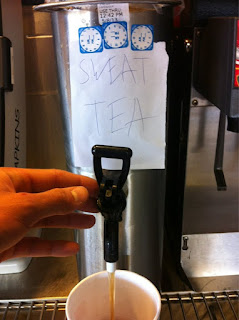 Games dedicated to spelling, especially the board game versions of Scrabble and Words With Friends, are simultaneously really good at teaching the patterns inherent to word construction as well as forcing proper spelling as a win condition. Parts of words form longer words with related meanings, and they can be optimized and cleverly worked to obtain high scores all around the board. Just don't rub it in your kid's face that he's actually enjoying gamified English class, or you'll break the illusion.

Bad spelling may make your kid appear dumb as rocks, but you can casually test for whether that's actually the case. After all, there are naturally bad spellers out there who are perfectly fine in other respects. All you have to do is put on a trivia game. Trivia games come in a bunch of different forms, and they are so common you might accidentally play one while having dinner out with the family.

Some might be less educational than others, perhaps dealing with pop culture or other short-tail knowledge, but you can easily find games tailored to subjects like history, math, science, or sometimes more creative fields. If you can put your kids in front of a variety of them, you might learn more about their interests and personalities while also determining whether or not they might be legitimately stupid rather than just lazy.

That is to say, it’s one thing to identify that your kid doesn’t know the order of mathematical operations, and fix it. It’s quite another if your kid can name and perform every dance from Fortnite, but can’t tell you a single factual statement about his country’s history and isn’t planning to get into a video game dancing career. 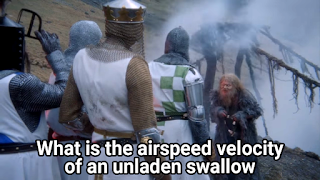 Trivia can save lives.

I’m going to specifically shout out to Scattergories because I love this game. That, and by now I’m sure your kid is suspicious of every other family activity you’re forcing him to participate in. Scattergories is one of those rate games where its fun and humor are inherent to its emergent gameplay design.

There’s a kind of intelligence that’s difficult to detect and even more difficult to nurture: looseness of association. This is the kind of intelligence you typically associate with the weirdos of society, but the kind of weirdos that all make more money than we ever will. These are the kind of people that are able to take broad swaths of knowledge and put the pieces together in cool new ways that the rest of us never think of. Scattergories, and games of its type, let you play with that looseness of association in a very un-weird way that’s fun and funny for multiple players.

In Scattergories, you’re given a list of categories and a letter of the alphabet. For each category, you have to come up with a thing in that category starting with that letter before time runs out. This is harder than it sounds, and that’s where the creativity comes in. As an example, for a vague category like “sandwiches,” and given the letter K, a “knuckle” sandwich is an acceptable answer. Clever!

I’m also including Pictionary in this list for its visual word association. Instead of directly referencing subjects like in Scattergories, you are forced to indirectly and wordlessly communicate to a team member about the subject on your card. Through your actions, he has to guess the word based on what it looks like, or what the word rhymes with. It’s also a fantastic opportunity to traumatize a kid who has stage fright. 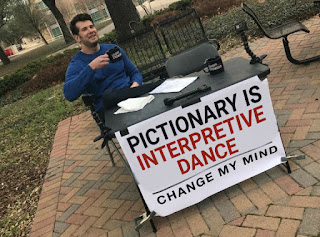 If after you’ve tried everything else above and there’s still no hope for your mini-you, he can always just become an artist! Luckily, there’s no shortage of games you can play with your child to encourage this. Artists are storytellers in any medium you find them, so giving them a deep well of different stories and experiences to draw from will make their future work so much richer, in addition to any emotional scars you’ve given your child through this experiment so far.

Apples to Apples is a simple game where you compete to fill in the blanks of a sentence. Think of it as multiplayer Mad Libs, but where you get to know the sentence beforehand. There’s immediate feedback when your child makes a play because the group’s reaction will indicate either an engaging and funny solution to the puzzle, or a dull and boring one. Kids crave attention and laughter, so you can rest assured as you play the game you are emotionally manipulating your child into being a better writer.

If you want to take it up a notch, consider getting into Dungeons and Dragons.

For those of you who just stumbled onto Gamastura for the first time, stop laughing and seriously consider getting into Dungeons and Dragons.

At its core, D&D is a creative writing exercise where you constantly have to adapt your story to the other stories being created by the players around you. Yeah, sounds interesting, doesn't it! The goal is to complete a quest as a group, while one player (the dungeon master) directs the overall scene to place obstacles in the way, and encourage players to overcome those obstacles via creative means. It can get way more complex than that if you like, but that’s the gist.

Suggested games for reading and writing: Apples to Apples, Dungeons and Dragons, Drawful

In closing, you should be playing word games with your kids. It’s good for them. It’s good for your family, too. Schooling doesn’t stop when you’re at home, and it’s too important to ignore. Besides, it’s way better than playing Monopoly, the destroyer of relationships.

You know what you did, Uncle Pennybags.