How Microsoft is helping accessibility for disable gamers

This post focuses on the Microsoft Adaptive Controller and how well it actually does following guidelines from gameaccessibilityguidelines.com
Sean Binnie
Blogger
April 08, 2019

Making sure that your game has accessibility for players with impairments is really important since without it, players with said impairments may not be able to play your game or have a much harder time playing due to a problem that they face.

It’s seemingly impossible to find a heuristics set that focuses solely on accessibility issues and how to deal with them. The one reference that I’ve found is from the website gameaccessibilityguidelines.com which includes a list of different accessibility guidelines for developers to read through and find solutions for. Each of these “heuristics” have links to people criticizing or praising a game that does this well, then also having a short list of games which show screenshot examples of how the game does it (ie. through clicking “Allow controls to be remapped/reconfigured”, and pressing the Overwatch example, you get brought to a page that shows the remapping menu) 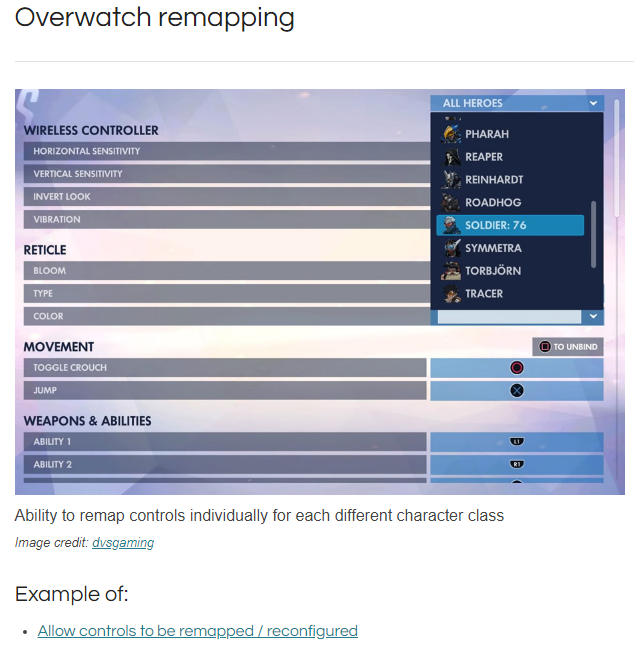 For a major platform and video game developer, it is important to be able to have as large of an audience as possible. The way Microsoft decided to improve the accessibility problems in was to build a controller for the XBox and Windows 10. The reasoning behind the controller as the solution was most likely due to the fact that they can’t control the in game mechanics of developers, as well as there are peripherals that are already produced to help people with some times of impairments (ie. hearing aids and wireless headphones for the TV for people who may have slight hearing loss). 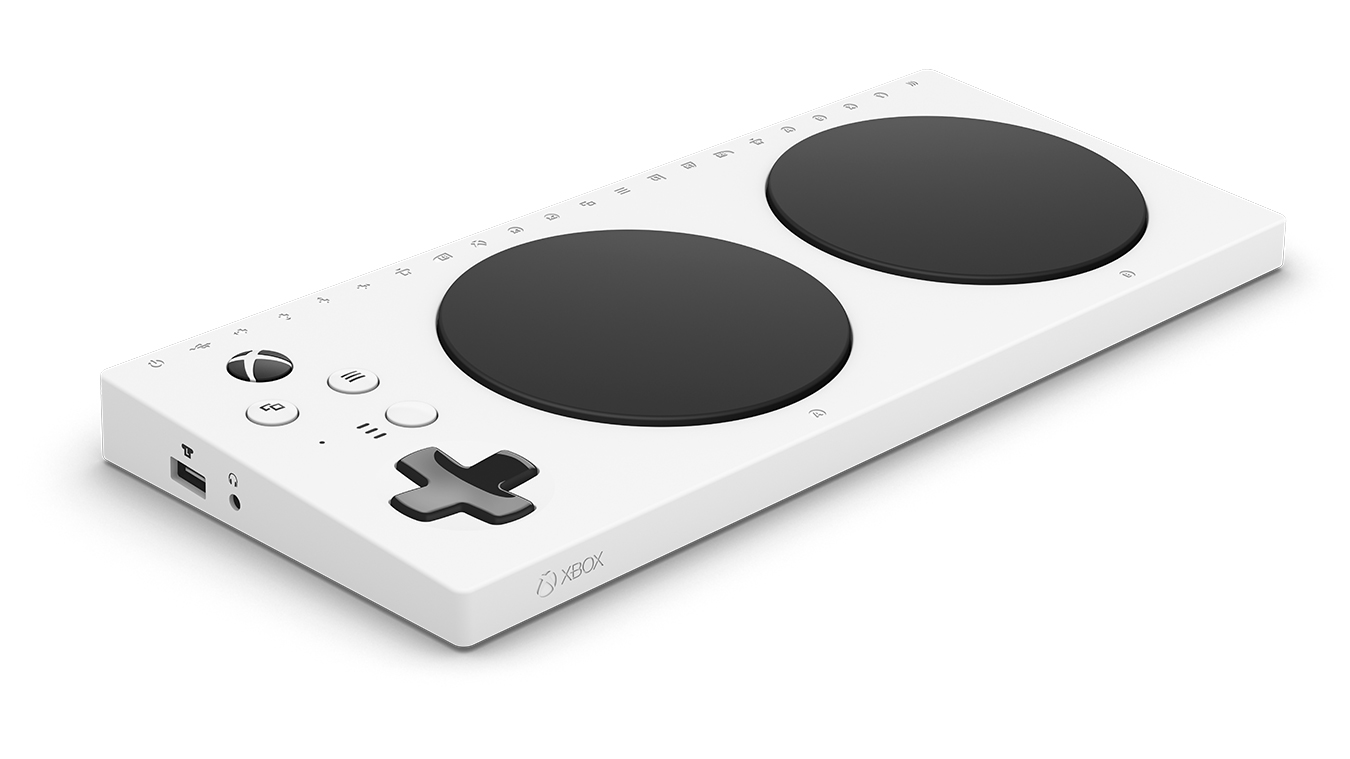 The way this controller works is by having very basic controls built onto the board itself as well as 3.5mm jacks and USB ports for accessories to work as buttons or controls. As seen above, the controller has 2 large pads which are mapped to the A and B buttons, a d-pad (digital pad) that is used for basic navigation, as well as a XBox button, a View button, a Menu button and blank button that saves different map profiles. Alongside these there are 3.5mm jacks at the back for all digital boolean inputs (button presses), a USB port on each side for the left and right analogue stick and a 3.5mm jack for a headset. 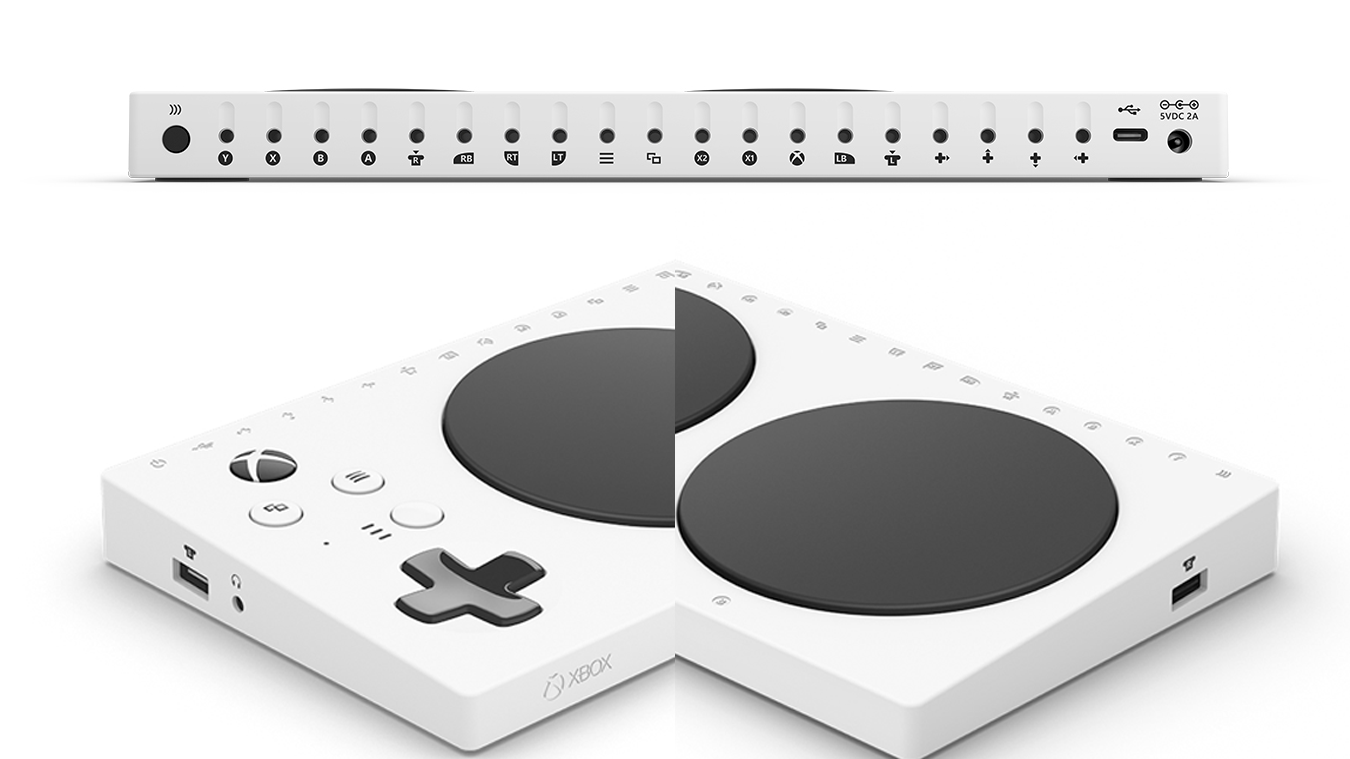 On the Microsoft store, there is also a part specific to accessories that they have made to support the controller. This contains items like different sized buttons with different activation sizes, as well as micro light switches for very sensitive tapping, a one handed joystick that resembles a Nunchuck from the Nintendo Wii and different mounts for the controller that mount to a wheelchair and other things. Although these are the only items Microsoft specifically makes, there are many more items and other accessories that can be found online and have been used by Microsoft such as foot pedals and joysticks. 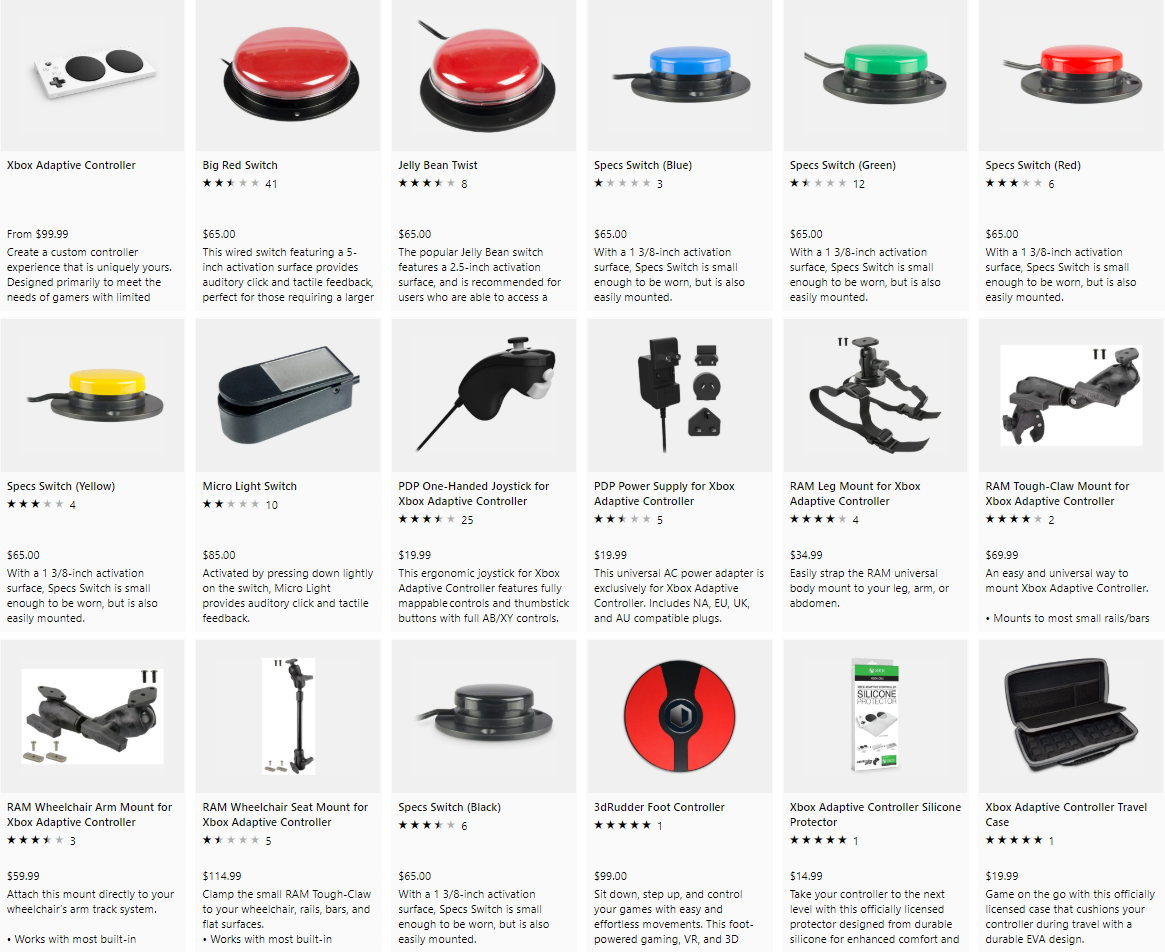 Now although this controller is built for helping with accessibility, there are some things that Microsoft knew they couldn’t control or help with when creating this controller. Besides some little heuristics here and there, the only one that they can control are the motor impairments. Looking at the rest of the heuristics, cognitive problems are based on the complexity and choices of gameplay,vision impairments are based on the user interface, size of font and color, hearing is based on the sound designers knowledge and ability to make it easier for people to listen to, and speech is gameplay reliant.

Evaluating these heuristics, there will be three levels for each type of accessibility. Basic being easy to implement and able to easily apply to games, intermediate being something that is a focus and workaround that you need to apply to the base game, and advanced being uncommon and niche things to change mechanics.

Starting with motor accessibility, focusing on control and mobility the first heuristic is to allow controls to be remapped or reconfigured. Usually this is dependant on the game, but the controller also lets you change what you want to use as input. As previously stated, through the Microsoft store and other outlets, there are multiple different buttons and hardware you can use that are a input to the adaptive controller and can be moved around freely to not constrain yourself to the basic diamond shape with the A, B, X, Y buttons.

The next heuristic is making sure that controls are simple. Although this is also gameplay reliant, being able to adjust where/what buttons are can make it feel a lot simpler. An example of this would be if a game had a weird controller layout which made you use buttons that didn’t feel like they were supposed to be mapped to that place. An example is when a player starts using a “claw” grip which may be smart for the buttons, isn’t comfortable and can injure your hand.

Another heuristic that is very game reliant but the controller helps with is ensuring that buttons used in gameplay are the same as buttons used for menuing. As this is up to the game developer, the XBox adaptive controller does let you change profiles, so if the game doesn’t support this, pressing a button to change your layout profile to match the menu is an option.

Including sensitivity is another heuristic, which they have covered in their XBox accessories app that you can download online and adjust the sensitivity of the left and right analogue stick. This is really important for primarily first person shooters and games where aiming with an analogue stick is very important as different people use different sensitivities that feel comfortable to them.

Button layout and how spaced apart they are is the next heuristic. Due to the adaptability of the controller, and being able to put buttons wherever you want, this is easily passed and there is no issue. Another part of this heuristic is the size of the buttons, which the adaptive controller also covers due to the customizability of inputs you can use towards it.

A intermediate heuristic for motor accessibility that the controller also covers is the support of more than one input device. Using the adaptive controller, it has a feature which lets you pair it up with a normal xbox controller, giving you the option to mix and match how you want to use the two controllers in conjunction. Basic examples of this is if you have a motor impairment in your right hand but can still use your left hand perfectly, you would continue to use the left analogue for usually movement and would use the adaptive controller for larger buttons and a easier right analogue stick to use if need be.

A intermediate heuristic in the vision accessibility category that this controller helps is the use of surround sound. Due to visual impairments, sometimes if you need to see where something came from, audio queues are very effective, and without surround sound it makes tracking an audio clip much harder to do. Because there is a audio jack on the adaptive controller, there is support for headphones that have high surround sound, although surround sound is an option that the game developers still need to include.

The hearing heuristic doesn’t have any rules that the adaptive controller follows well, but that’s mainly due to importance of the sound design for the developers to do. One of the ulterior ways to improve a hearing loss issue I brought up with TV’s can also be solver by using the headphone jack in the adaptive controller as the previous heuristic also mentioned, due to being able to plug in headphones, you don’t need to listen to the TV which can be far away.

The speech heuristic is also very reliant on what the game does in terms of design, but once again using the headphone jack, you can plug in a headset that has a microphone. This solves a issue of not having one available, as well as a motor heuristic that isn’t mentioned about holding or placing the microphone near you.

The next set of heuristics are general and not specific to any certain impairment and primarily focus on design aspects of the game. One of the heuristics that Microsoft has done is solicit feedback from players that suffer from accessibility issues. Although this is developer specific, I think it also applies to the amount of time and research they put into designing and making the XBox adaptive controller.

Microsoft has done a lot to help the accessibility community and there is still a long way to go to improve it even more. The controller is a simple solution that covers a lot of the accessibility problems people have with motor skills, but making sure that developers don’t forget about all the other types of impairments that people suffer, and making sure that they design their game to give these players a chance to play and experience it as much as a able-bodied person will be the next step.

Where I got all the info for what types of accessibility problems players have and what games did it well.

Microsoft store for where to find accessories for the adaptive controller

Inspiration for this article. Lots of interesting stuff here and where I learned about gameaccessibilityguidelines

I contacted Microsoft support early on to make sure I knew what all the buttons on the layout were for. I don’t actually know how to cite this guy but he helped me learn about the different profiles from the blank white button.