How Games Tell a Story: Exploring the Different Methods of Interactive Storytelling

This post looks into five unique games to explore how they tell their stories, from the player playing through a heavily cinematic plot through pure environmental storytelling, while also looking at how each method excels in certain aspects of narrative.
Randen Banuelos
Blogger
January 14, 2020

NOTE: This article will contain certain spoilers for games being analyzed.

in terms of storytelling, games set themselves apart from other media by not only creating an interactive relationship with the audience, but also experimenting with how a story is conveyed in the first place, as opposed to a story being front and center in media like novels and movies. Games are not restricted to linear progressions and the average "plot triangle" system; rather, they can use open world exploration, item lore, environmental storytelling, and countless other tools to relay the history of their worlds. The main question this article serves to explore, then, is this:

How can a game tell a story?

To answer this, let's explore five different games and see how they take a spin on interactive storytelling.

Following the Classic Plot Triangle Structure, With a Twist (Firewatch) 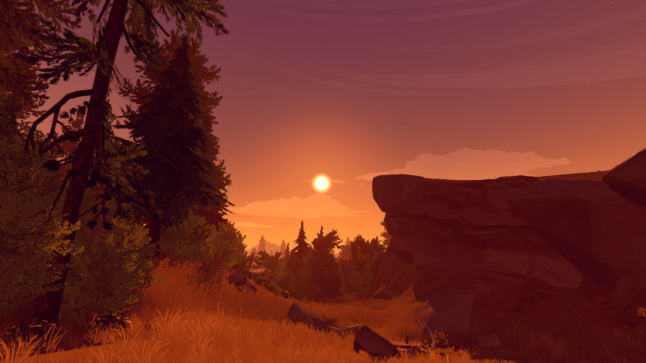 Campo Santo's Firewatch tells its story in a linear fashion like traditional media, preventing the player from ever straying too far away from the plot at any given time. The story itself mirrors this straightforward nature in a normal plot triangle structure: exposition (protagonist Henry's background and NPC Delilah's introduction), rising action (the missing girls incident and lookout tower break-in), climax (the cave search amidst the wildfire), and falling action. It is not truly an experimental approach to storytelling by any means, but the narrative plays on its strengths to create an overall enthralling experience. Add on impressive voice acting and a beautiful art style, and Firewatch cements itself as a great indie game that shows the power of a traditional story structure.

What makes Firewatch's narrative unique, however, is the juxtaposition of its rising action and eventual climax. Prior to the final days of the game's events, Henry and Delilah are convinced that a government conspiracy, hidden under the guise of biologists studying in the field, is brewing in the mountainous forest they watch over, and that they are being monitored by these enigmatic scientists. In the background of these developments is the story of Ned and Brian Goodwin, a father and son that formerly held the position of Two Forks Tower fire lookout until they left without notice; Delilah occasionally mentions them off-handedly throughout the game, with the events of the government team normally taking precedence over the Goodwins' story. It is not until the climax that the true story of Firewatch is revealed: there was never any government conspiracy. All monitoring, strange silhouettes, and raids were done by an emotionally hollow Ned Goodwin, who has been living in the forest for several years after the sudden death of Brian in a rock climbing accident. Firewatch throws its players, and its own characters, for a loop with this red herring, and demonstrates how even a common story structure can be rejuvenated by usurping the player's expectations of the plot. The story of FromSoftware's Dark Souls III seems fairly basic based on cutscenes alone: you, the Unkindled, must defeat the Lords of Cinder in order to prolong what is known as the "Age of Fire." The game relies heavily on its universe's terminology and expansive history, which can cause many newcomers to be lost on what exactly the game is about. The story for some people, however, is not the main focus of Dark Souls III, and they instead relish in its gothic atmosphere and the punishing, yet satisfyingly high-octane combat. A player could go the entire game without knowing much more than the fact that defeating the Lords of Cinder is a good thing, and that they must fight their way through the world to reach their holds. In order to truly understand the full depth of the game's lore, though, one must look in a peculiar location: item descriptions.

Dark Souls III hides some of its richest pieces of lore indirectly, using the descriptions for certain weapons, rings, and other accessories to not only give background for that specific item, but also fill in gaps of the game's lore. By collecting more weapons and armor, the player is rewarded with new information about the world they are traversing, such as the history of other characters and their importance to the overall timeline of events leading to the present day in Dark Souls III. The narrative does not present all of its pieces to the player in a nice, sequential fashion; it challenges the player to make the effort and construct the story themselves with the segments they find throughout their journey. In a sense, Dark Souls III is not a complete picture, it is a puzzle that is waiting for the player to put it together.

The Story Itself is the Game (Until Dawn) 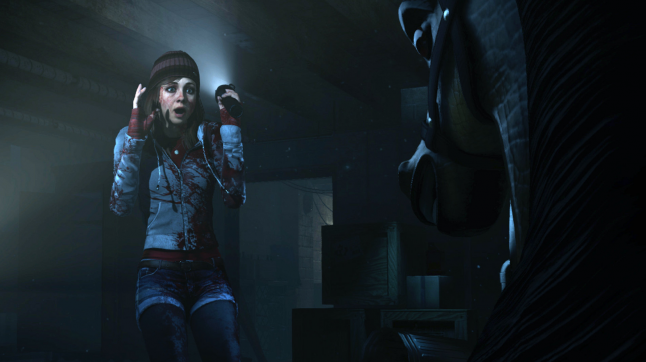 A typical game will normally go one of two ways, either focusing solely on gameplay like in Tetris or Flower, or creating a relative balance of both gameplay and narrative, such as Super Mario Odyssey. In recent years, there has been an increased trend in games structured as an "interactive drama," harkening back to the days of text-based adventure games. Supermassive Games' Until Dawn is a prime example of this style of game, with the playstyle of the game revolving entire around the unfolding narrative. Finding weapons for later use, keeping calm as danger draws near, and more are all integrated into the story of eight people trying to survive being stuck in a remote cabin in the harsh winter. It is common for a game to use its story as a tool for propelling gameplay, but Until Dawn takes it a step further, using the gameplay to propel the more important element of narrative.

A core feature of Until Dawn that sets it apart from similar narrative-focused games, like Telltale Games' The Walking Dead, are totems, which are collectibles that give the player a glimpse at a potential future event, such as a character's cause of death. These visions are meant to give the player an edge against the game's largest system–the butterfly effect. This system forces the player to engage in quick time events that, if failed or incorrectly predicted, results in a character's death or straining of relationships. In order to combat this, the player uses the totem visions and exploration to find ways to escape danger, whether that be finding a gun hidden in a drawer for later use or knowing when a character might be in harm's way, thus letting them better conform the narrative to their wishes. Until Dawn takes its players and drops them straight into its thrilling drama, and with enough exploration and methodical analysis, they can predict what the narrative will throw at them next.

Use a Mix of Open-World and Environmental Storytelling (The Legend of Zelda: Breath of the Wild) 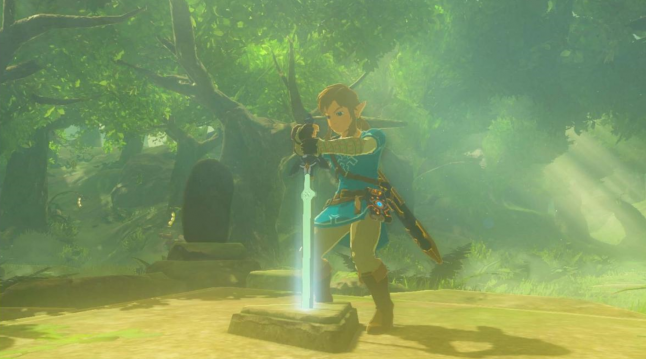 Breath of the Wild's main story is presented to the player clean and simple, in which you play as the reincarnated hero, Link, who has just awoken from a one hundred-year slumber to see that the kingdom of Hyrule that he once protected has become a ruin; by freeing the "Divine Beast" machines, you can save Princess Zelda from the clutches of Calamity Ganon and return Hyrule to a state of peace once more. In order to find out more of what happened prior to Link's slumber, the player is encouraged to explore Hyrule and the four main towns that the Divine Beasts reside in, talking to townsfolk and important figures to learn more about the history of their regions and how Calamity Ganon affected their people. This open-ended exploration not only gives the player freedom to explore the narrative at their own pace, but also incentivizes them to continue exploring in order to piece together the history of Hyrule and all of its inhabitants.

The game's history is told not just through talking to NPC's and reading texts, but also through environmental storytelling. From old forts swarmed with broken Guardian enemies, to the dilapidated ruins that make up the Temple of Time, the player is able to physically walk through history and see how Calamity Ganon has impacted the world of Hyrule. It is one thing for characters to tell Link all the tragedy that happened to them and their homes, but it is another thing to actually show the player the ruins that surround these villages and landscapes. By infusing this style of open-world exploration with vivid environmental storytelling, Breath of the Wild is able to not just tell a captivating story of triumph and ruin, but actually have the player experience it first hand.

Only Environmental Storytelling (Inside) 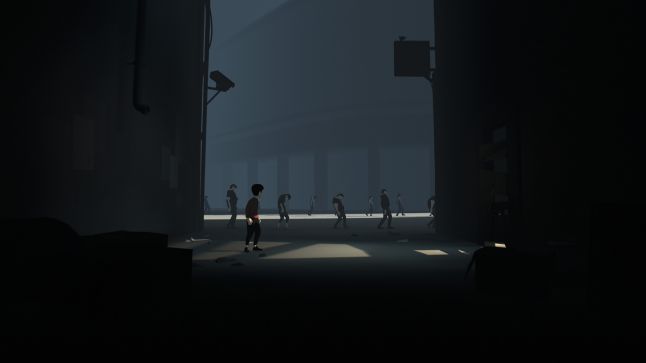 Expanding on the theme of environmental storytelling is Inside, a game from indie developer Playdead that acts as a spiritual successor to its game Limbo. Inside contains no spoken dialogue or written lore whatsoever, instead telling its story purely with the travels of its child protagonist throughout a dystopian world. This is an approach rarely taken by games, for even the most atmospheric of games typically have some semblance of dialogue or direct messages to the player. Inside, on the other hand, goes for an experimental approach that is almost a direct contrast to a game like Firewatch, foregoing a traditional narrative entirely and using nothing but the player's actions and the game world itself to tell its story.

This type of pure environmental storytelling is rarely seen in most well-known games, and comes with its own set of strengths and weaknesses. In terms of what this style of narrative does well, it is able to appeal to a wider range of players, piquing the interest of players that prefer gameplay over narrative and vice versa. It creates a mysterious, fascinating layer to the game, allowing for a wide range of discussion and debate over the game, like this very article. On the other hand, having such an open-ended interpretation can pose many questions over the true nature of the game without much closure. What exactly is the motivation of the child protagonist? What are the scientists in the final act of the game researching? How did the world change into a dystopian society? Adding onto this, players that enjoy narrative may become disillusioned with the game once they realize that they will not get any direct answers to their questions, desiring some form of certainty and explanation from the game that shall enver come. In any case, Inside plays with the idea of narrative to extreme lengths, creating a new experience of storytelling that is not often seen.

From these games, it is clear that games can tell a story in any number of ways. They can go for a traditional style like Firewatch, become more story than game like Until Dawn, or be shrouded in enigma like Dark Souls III and Inside. Games are a unique vehicle for telling stories, for they are not confined to the limits of linearity seen in movies and novels; they can become something more, something abstract, something never before seen. As the ability to make games becomes more and more accessible each day, more people will be able to challenge the traditional idea of what a narrative should be and create their own experiences via the medium of games. Games are no mere wall of text or flashing pictures on a screen, they can become so much more than a simple story.