How EVO helps devs tune and test their fighting games

“Evo players can break a game down faster than anyone," Arc System Works' Toshimichi Mori tells Gamasutra. "They can jump in and do the combos that others would need days to learn."
Phill Cameron
Blogger
August 16, 2018

Fan feedback is a vital part of the game development process, and it’s even more important if you want to solidify your game as an esports contender.

Getting feedback from fans at conventions and other gatherings is nothing new, of course, but some events are uniquely valuable. The type of feedback devs can get at the Evolution Championship Series in Las Vegas (the biggest fighting game tournament in the world), for example, is unlike anything else in the industry.

“We’re showing Kill la Kill for the first time here to get feedback from the fighting game community,” Toshimichi Mori, game designer and producer at Arc System Works, told Gamasutra during EVO 2018 last weekend. “It’s a 3D arena-style fighter with 2D elements, [so] we want to see how the players feel about the 2D elements and to check if they work as intended.”

Arc System Works has brought early builds to events before, but this is the first time they’ve shown a playable build of their latest title, Kill la Kill, in public. They're doing it because they believe Evo is the best place to get feedback on whether or not their game is viable as an esport.

Getting prepared for feedback

Curious devs should know that Arc set up a survey at the end of the Kill la Kill demo with a long list of questions about the controls, the mechanics, the characters they used, and the training elements put into the game. They do this because it’s often quite difficult for the devs to actually sit down and get one-on-one feedback from the players, since their time is usually monopolized with meetings and media appearances.

"Evo players can break a game down faster than anyone, they can jump in and do the combos that others would need days to learn."

To compensate for this the teams at Arc System Works, Koei Tecmo’s Team Ninja, and Bandai Namco all record matches, both from their demo stations and from small tournaments they hold with casual and competitive players. They then take those recordings and use them to see which mechanics are confusing and test if frame-perfect moves are doable.

“The window to do specific movesets in our games, and other fighting games, is only a few frames,” Mori added. “Evo players can break a game down faster than anyone, they can jump in and do the combos that others would need days to learn.”

According to Mori American players are less shy about giving feedback and articulating what they dislike about a game, even if it can get loud. “It’s much more common for Japanese players to be reserved after playing,” he added. “American players are very vocal and they’ll shout when something good happens.” 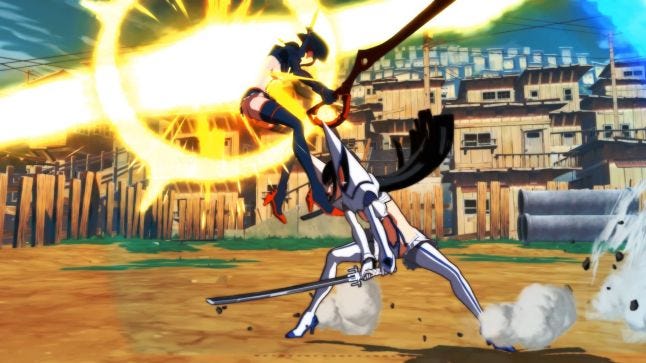 The large booth environments for games like Dead or Alive 6, Kill la Kill, and Super Smash Bros. Ultimate that Evo featured this year weren’t the most conducive to having conversations about what worked and what didn’t. There was too much noise, very little space, and long lines of fans waiting to try their hand at some unreleased software. Luckily, the indie space at this years show was a little easier to handle.

The Media Indie Exchange has showcased the work of indie devs for the past six years at Evo, featuring both fighting games and other genres. Mighty Fight Federation, a 3D arena-based fighter, had a three-character build present for attendees to play.

“We want to work with players here so we can actually build a competitive community of our own,” said Orie Falconer, one of the Toronto-based developers of Mighty Fight Federation. “We’re in that competitive mindset but need that common feedback.” 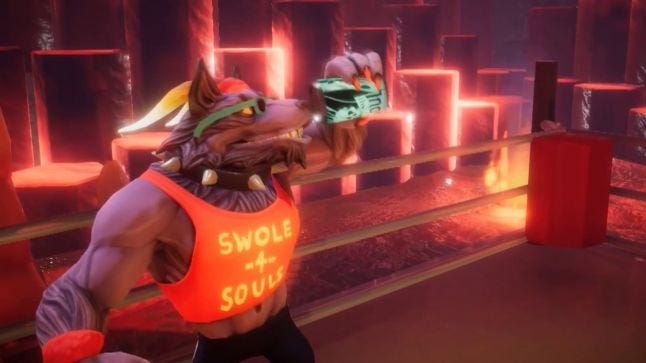 Falconer and development partner Julian Spillane brought an early build to the tournament and weren’t afraid of getting into the weeds with players who tested their game. “Our game doesn’t have a traditional block,” Falconer said. “We push people to use combo breakers instead when getting attacked, but people who have tested have asked for more options to recover or counter.” 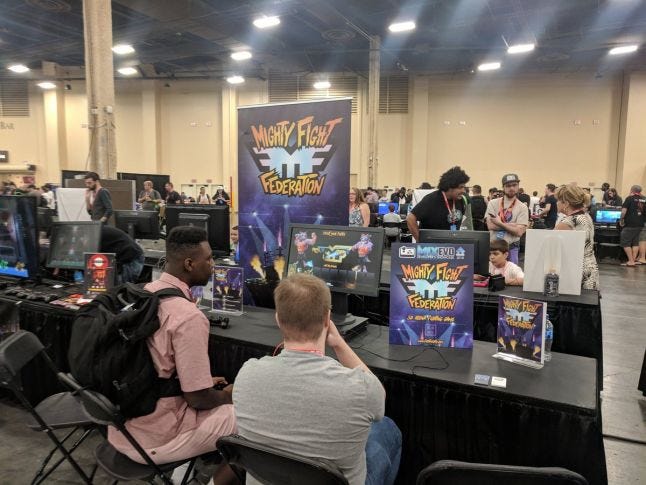 Outside general comments about the structure of Mighty Fight Federation, testers also broke down issues they experienced with specific characters. “L.EXE, a computer virus-like character, currently has a frame perfect aerial dodge to use against projectiles,” Falconer said. “Players have said it’s too hard to actually use and that the game actually punishes them for using it.”

"We want to work with players here so we can actually build a competitive community of our own. We’re in that competitive mindset but need that common feedback."

Falconer and Spillane discovered that there were multiple things wrong with L.EXE’s dodge, “A lot of projectiles in the game are actually multi hit, so her perfect dodge is tricky to use in those situations,” Falconer said. “The dodge was designed as a counter, but it’s not working that way.”

Most of the characters in Mighty Fight Federation don’t have dodges due to the meter economy in the game. Meters get build up with combos and hits, leading to special moves that mix the action up. The feedback they received has convinced the development duo to either remove the dodge, replace it with something else, or completely adjust it to be less punishing on the player.

The developers wanted to throw some variety on the pile with L.EXE’s moveset, but they ended up countering some of the base systems they created for the game. It’s something that self-testing may have caught -- but would have most likely been an issue at launch if they hadn’t taken a build to Evo.

Competitive fighters can’t survive on the hardcore players alone; franchises and individual titles need a casual fan base that continues to watch and play the games that the pros are dominating. Luckily Evo has a mixture of casual and competitive attendees, with many coming just to watch their favorite players duke it out in person. This makes the event the ideal test environment for the longevity of a fighting game: if a casual fan can’t get into it and have fun right away, changes need to be made.

That was part of the problem with Punch Planet, a 2D sci-fi fighter developed by three-man studio Sector-K Games. Will Graham, one of the members of the team, has brought Punch Planet to Evo for the last two years for feedback. 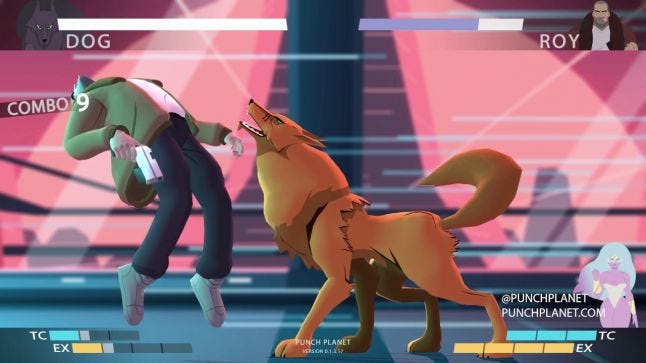 “The biggest thing we noticed was how much people were struggling with Dog,” Graham said. “He’s a charge character so you have to hold back and slap the joystick to attack; people weren’t getting it.”

Dog, a literal dog that doubles as a freelance assassin in the game, was initially designed as a charge character. That means the player must hold the joystick in one direction to build up attack before pushing it in the opposite direction to release an attack. It’s a familiar type of character design in the fighting game community, with Street Fighter’s Blanka being a popular example.

“You want your game to be accessible,” Graham added. “It should be easy to learn the mechanics while still having them be deep and difficult to master. That wasn’t the case with Dog.”

Graham and his team found that most people that picked up the game gravitated towards Dog since he looked like the most approachable character (plus, he's a dog). They decided to rework the character into a rushdown archetype, making it reliant on quick movements and close quarters combat, something that most players would be comfortable with from the get go.

Sometimes bringing an early build of your game to an event like Evo is about more than just getting feedback on mechanics and characters. It’s about giving prospective players a voice in the creation process and a voice in a potential competitive community.

“It’s about feeling the temperature of the community,” said Dead or Alive 6 director Yohei Shimbori. “We want their voices to be implemented into the game and this is the best place to get feedback.”

Editor's Note: The lead image used for this story was shot by skilled eSports photographer Carlton Beener at EVO 2018.